It looks like something straight out of Middle Earth - and the story behind it is almost as fantastical.
This cottage cost just £150 to build, using only natural or reclaimed materials, and is now rented out for a fee of fresh milk and cream.
And with no mains electricity, gas or water, the bills don’t come to much either.

Here's the link to the full article with loads of photos, including the one below - £150 cob house 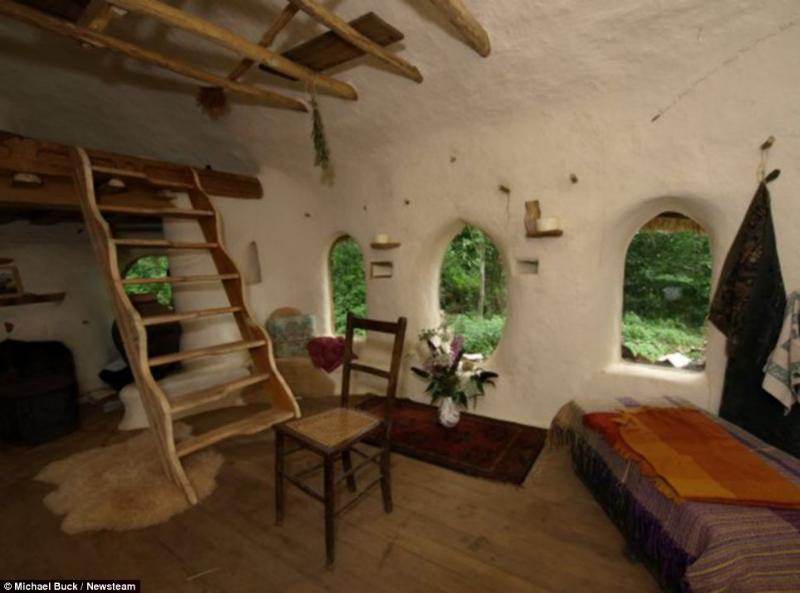 The guy that built it, Kevin McCabe is a cob-building specialist specialising in the high quality repair of historic buildings. Here's his website - Kevin McCabe

R Scott
pollinator
Posts: 3914
Location: Kansas Zone 6a
236
posted 9 years ago
COOL. All it's missing is a rocket.

Matthew Nistico
pollinator
Posts: 645
Location: Clemson, SC ("new" Zone 8a)
121
8
posted 9 years ago
Awesome little cottage. And I agree with R. Scott: it is screaming for a pocket rocket!

Len Ovens
pollinator
Posts: 1481
Location: Vancouver Island
56
posted 9 years ago
I am thinking this style of building may be more appropriate in my area/climate than the underground/bermed house. It would probably take longer to build and be more work than the wofati, but this is a much wetter climate. It is also a somewhat warmer as well. I may build small and try both (or even some others as well). I thought it was interesting what the talking head said about permits. This one was build as a "temporary" building, a "summer cottage". I have noticed that many of the recreational buildings around here seem to be built to a lower standard as well. I need to check what the rules are. I will note that the summer cottages I have seen that do not appear to be to code are also off the road (water access only) and that may also have something to do with it.
Burra Maluca
Mother Tree

Len Ovens wrote:I thought it was interesting what the talking head said about permits. This one was build as a "temporary" building, a "summer cottage".

From what I remember, in the UK you didn't need permission for 'temporary agricultural dwellings', which is probably why the guy rents it out to an agricultural worker and gets payment in milk.

A.J. Gentry
pollinator
Posts: 154
Location: Ohio
43
posted 9 years ago
Wow.... The only thing I think it is missing is hobbits.

Len Ovens wrote:I thought it was interesting what the talking head said about permits. This one was build as a "temporary" building, a "summer cottage".

From what I remember, in the UK you didn't need permission for 'temporary agricultural dwellings', which is probably why the guy rents it out to an agricultural worker and gets payment in milk.


There are some similar things here. I was going through the building by-laws for the district we are looking for land in (Strathcona) and found that if you have a "farm" you can build any "low occupancy" building you want with no permit. I need to do some more looking as it seems recreational cottages have different rules as well. This is certainly an area people who are thinking of building need to look at closely. There are some parts of the country (Canada) where the smallest "house" you can build is 1200sqft! Huge... But what about a "bunkhouse" for hired help? a recreational cottage? or other "low occupancy" buildings? Most places will allow an "apartment" as part of a barn. The apartment still has to be built to code, but can be much smaller than 1200sqft. It would be good to find out if a "sanitary pit privy" (not outhouse please) is a legal alternative to a septic field too. There are after all requirements as to how they are built... even if you don't need a permit. I don't know about the US or other countries, but in Canada, there is a country wide building code and a province wide code. However, on top of that there is the building by-laws of the municipality/district which determines when you need a permit and may also add to the code requirements (more so in big centres) such as height restrictions or set backs etc. It seems most of the by-laws are available on-line. Even for smaller districts.

Some of the strange building by-laws:
- largest free standing building with no permit 10sq meters (103sqft or so), but add an addition to you mobile home that is twice that size with no permit.
- Some places will allow one home and one mobile home, but not two homes. However, if the second home is built off site in modules and moved and assembled on that property... you may have a two story 2000sqft mobile home legally. I wonder how a home made from containers looks in this picture.

Anyway, all this to say, when dealing with legal stuff, using the right words is very important. It means being careful where you buy land (how is it zoned, what district is it in, what is the growth plan for the area). How much you buy is important too. In some places a "farm" is defined as having a minimum size even when zoned as ag. Seems to me 80 acres in Alberta as an example, while here there are farms on very small properties. It is questionable if farming for a profit is possible on even 80 acres in Alberta using "normal" farming methods, but here on the coast, even 5 acres can be quite profitable. Anyway, spend time in research and look for a strange way of naming what you want to do that just might make it legal. In Canada, the building code is in all the libraries, or you can buy one. They seem costly, but in the over all picture the cost is probably quite reasonable. Taking weird plans into the district office might go a lot better if all the odd stuff can have the words: "as per building code" with page and paragraph.

posted 9 years ago
Sound advice, Len. I will be taking it up as my land is zoned AG and I know what I've been told about it, but I want to see it in print. Words... they may be written in legalese, but words, as any good lawyer knows can be turned on the tongue to favour a different flavor.

Robert Alcock
Posts: 65
Location: Cantabria, N Spain
6
posted 8 years ago
I've visited this building twice while it was under construction. It's not far from my home town in Warwickshire. I talked to the guy who built it -- not Kevin McCabe but someone else (don't want to post his name here without his permission). I think he did it without any formal permission, basically on the quiet and with the knowledge of the lanwowners, who are a cooperative farm. It's pretty well hidden away at the back of the farm.

"If you have built castles in the air, your work need not be lost; that is where they should be. Now put the foundations under them.” - Thoreau