Got lots of cool stuff done today. With lots of pictures.

I finished sanding the last gate header while Erica did some routing and sanding touch up. Then I charred and routed the sides of the Cooper Cabin header. Both took a bit of time. The torch I was using kept acting up and putting out a plume of flame instead of a point. I switched out the nozzle and that one worked much better.

For routeing the sign I took care to measure and space out the letters and draw a path for the router but even with that it still had the tendency to jump around. Not that anyone will be close enough to see the knot I hit or the wobble around the "BB's".

We applied linseed oil to protect the char finish. I think they look quite sharp.

Erica and I monkeyed our way up the gate posts and screwed in the headers with only a few dropped screws and minor adjustments with a hatchet. Was the easiest part of the whole job. And they look great.

I spent the rest of the day coming up with a gate latch and filling in the gate frame.

The latch I made attaches to the fence with one nail, rotates and hooks the gate with two strategically placed spurs. I thought about doing the same mechanism with a rope, tying the branch to the fence, but couldn't figure a good way to do it.

The branches in the frame are just the top skinny portions of junk pole. I alternated weaving in front and behind the center support so they are pinned in well and pushing against each other. I'll watch to see how they age and if they weaken.

The next gate needs to have the cross support further from the top and bottom rails to make it easier to fit the thick end of the poles.

In other news, I got some bow supplies in the mail and I'll be working with them soon.
BeforeRoute.jpg 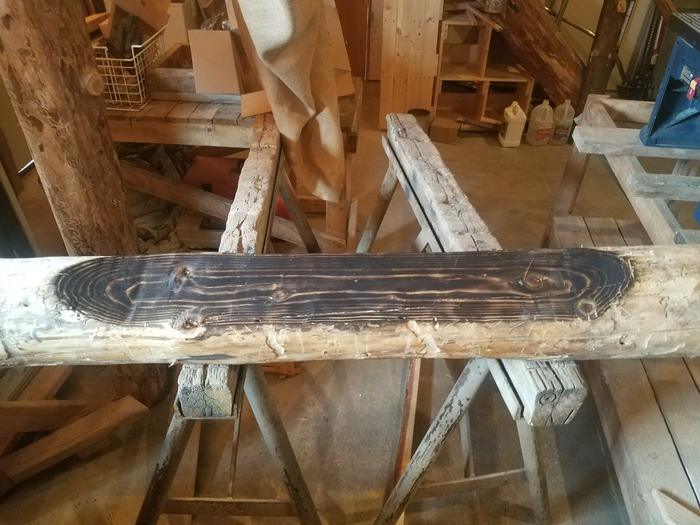 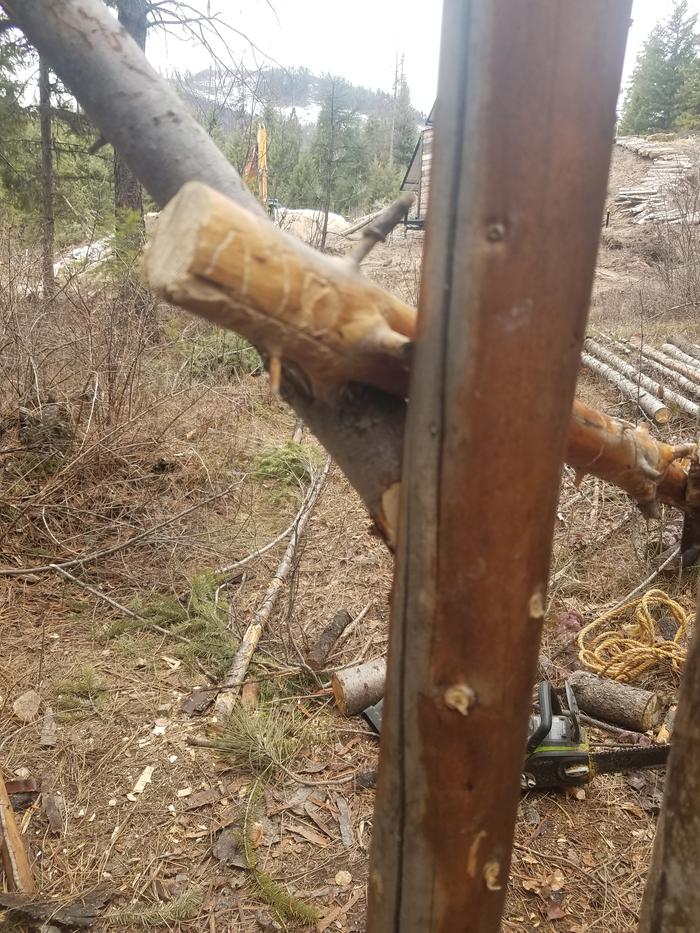 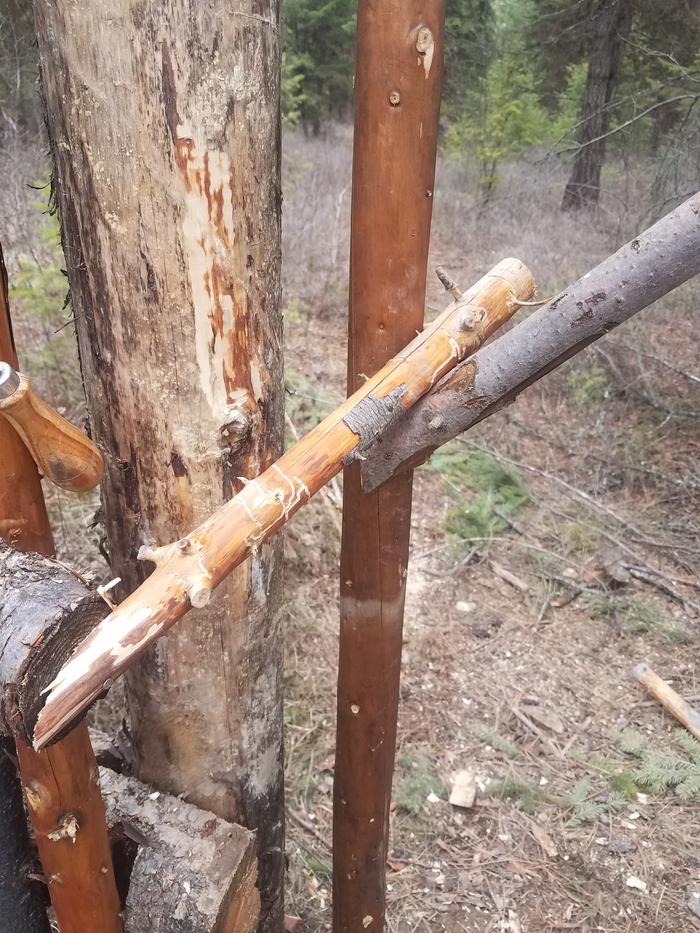 Lots of cool meetings today. Not like your regular meetings but super meetings. At least they were super for me.

Early in the morning all the boots worked on cleaning up the shop and sharpening tools. I learned to sharpen a chainsaw to a decent shape.

Then at 10 we started our planning meeting, going over the top priority stuff. Only got through half of the list, so more meetings later to get to the rest.

The most exciting thing today was six of us boots chose a hugel berm to garden and produce food for the bootcamp. I got a huge spot with good sun exposure. It is way more space than I've ever grown on before.

There is an existing apple at the left most edge. The top graft has died and the rootstock has taken over, but I've got some Northern Spy grafting stock that needs a home so yea for me.
Plenty of challenges with the space. Its at a steep angle, low fertility soil, grass in the beds, watering, keeping mulch in place, starting plants without frost killing them. I've drawn a picture of some ideas down below.

All of us poured over seeds and idea resources in our own way. I drew my picture. Some read some books, or made a schedule. I also dug through my own seed box and collected the stuff I'll need first. We still have some time before we can direct seed or worry about starting stuff under cover. I want to make some cheap ollas with terracotta pots so I can keep the berm hydrated. We'll all be helping each other but each area is ours to plan, observe, and know what is going on in general.

Last thing last is a pic of my sinew and snake skin for backing some bows.
ChainsawAction.jpg
FutureGarden.jpg
GardenPlan.jpg
SinewandSkins.jpg

After doing some clean up this morning, everyone gets Saturday to themselves. So I took a trip over to Missoula and stocked up on some food and a pot and pan. It's time to tinker with Rocket Mass Heater cooking.

Woke up to snow today, the Tipi was cool but didn't see my breath. I started the day by getting the heater going and warming up breakfast, more tasty rice and eggs with some whole roasted jalapenos.

I walked over to where I think Bella is hiding out and left some food for her, the last bit I left she cleaned the bowl so I left a bit more. With winter still around I bet there isn't a lot of prey.

The snow melted away by 10, but I worked inside this morning repairing a chainsaw. The bar oil stopped pumping even if the reservoir was full. Supposedly you can't repair these saws, no one sells the parts. Cracked it open anyway and pulled out the guts, cleared out the oil lines, vacuumed out the heaps of saw dust and cleaned the air ducts. The hardest part was getting the wires back in place. Works fine now.

Dez and I worked next to each other, comparing notes, he had a saw that would shut off by itself. Looks like his is running now too.

I opened up one of the batteries too. It has a broken catch that is supposed to hold it in the saw. Looks like the best way to fix it is to epoxy the snapped plastic tab but we don't have any epoxy for plastic. It's pretty nasty stuff but the other option is to fabricate something out of metal or find someone to 3D print the whole plastic piece ( I'm open to this ).

Couldn't fix the battery yet but I know how now.

Second part of the day was all Love Shack work.

I worked with Daniel and Nine to hang the crazy heavy door and reinstall the Minne Mouse heater. And run up and down the hill from the shack to the shop getting tools.

Moving the heater was heavy but went well. We put down a pad of bricks and connected the chimney. Nice and straight forward.

The door was not straight forward. It had to be trimmed several times on the left right and top sides. And held in place while getting marks for hinge placement. At least making jokes about screwing wood while in the Love Shack kept things light.

So new plan for installing doors... I think from now on we build the door and frame together and install, square, level, and plumb them together instead of messing with putting on hinges while it's shimmed and moving around.

The door catches hard against the bottom right of the step and the hinges don't swing very smoothly. But it works so just a little shaving, putting in a door jamb, and installing a latch and it will be done.

Craig Hetzl
Posts: 2
posted 4 months ago
That is so cool.