Kathleen Sanderson
pollinator
Posts: 1305
Location: Green County, Kentucky
116
posted 11 years ago
Okay, I know somewhere there's a website with pictures of a really small rocket stove in someone's studio, but right now I can't find it!  I've been drawing up plans for a camper to go on the back of my pickup that I may build this year, and I'd like to have a tiny rocket stove in the camper for heat and for cooking.  Anyone know what the smallest feasible size is for a rocket stove?

Kathleen
charles c. johnson
Posts: 369
posted 11 years ago
the best luck i had was 2in out of fire brick however the burn tunnel had to be 4 inches and it was hard to get it started
Posts: 12
posted 11 years ago
I won't repost here, but in the thread

I've mentioned something I'm toying with, along exactly this line. Thinking of small room/shop or RV/tent heater. (not at all what the OP writer in that thread was asking about)
Mine was 1.5" square, and needed to be taller than the 4" I made. Seemed to work great, for an initial experiment. Lots of heat.
Another writer left pics of a larger coffee-can scale experimental thing he built, that's not very finished or complete.

I was partly inspired by the rocket lantern we have so little info about.
My ultimate idea right now is something with an air heat-exchanger on the uptake to make use of as much energy as possible, but at the top of the burn chimney, a hot plate for small cooking jobs.

similar to, though smaller than this

this has interest too
Arkansas Rocket Stove

For a tent/RV or room, I definitely want a flue to vent it out of the habitable space.

I'm not sure how small is the smallest commercial stove with an uptake flue:
looking at these

and elsewhere
Wyoming Lost and Found

OK, but nobody makes a "rocket" stove "up-draft" burner in such a thing.
We want the clean complete burn, the smokeless nature, quick starting of a small fire, that does a lot of work for its size.
At times it'd be nice to have the feature some might call a drawback, that it needs constant feeding, and will go out & go cold quickly if you're not constantly pushing the fuel into the intake shelf. This means it will go out. A safety feature, if you look at it so.

Kathleen Sanderson
pollinator
Posts: 1305
Location: Green County, Kentucky
116
posted 11 years ago
What inspired me was this:  http://www.marinestove.com/halibutinfo.htm  I'd love to have one of these, and if they work in a boat, they should be able to work in a camper.  However.  I can't afford the three thousand dollars or thereabouts that one of these nifty little stoves costs!  So what I'd like to have -- and I think some mass could be made to work -- is a small rocket stove that I could use to heat the camper and to cook on, and heat water.  And you know, when you are out boondocking, especially in the high desert, it's a lot easier to come up with an armload of twigs and such than with a stack of split hardwood for a big fire.

Now I'll go take a look at your links -- thank you!

Perhaps you didn't understand. It is a rocket cooker and i used it for two years to cook with and smoke foods. It would not be applicable to this thread as it is an outdoor stove.

ronie wrote:
Perhaps you didn't understand. It is a rocket cooker and i used it for two years to cook with and smoke foods. It would not be applicable to this thread as it is an outdoor stove.

Correction understood. Perhaps I should have used more words, or left it to others to read your own work. Yours is more the size, and probably very like the output of the smallest of those marine stoves (I'll bet with less smoke and fuel use? I doubt these little commercial stoves are "re-burners" which cycle the smoke through for complete combustion. In fact, I'll bet the camping ones are pretty dirty.)

What I meant by "unpolished" was that the implementation wasn't worked through enough for this kind of vehicle application, as you said (Nor was my tiny experimental job). Like those great little marine stoves, it needs to be fastened down, made from better materials (I'm toying with second-hand sheet metal, and won't ever even try using aluminum or galvanized, and won't consider anything even close to operational status if it isn't of good solid steel)

So, what we're looking for (myself, anyway) is something no bigger than your outdoor burner, or the small marine stoves, that's secure and heavy duty enough to serve. I suspect a rocket burner would need more attention paid to ash or fuel spill-out of the intake horizontal of the "L" than any of the "can-based" ones we see out there.
Note my observations about the entire small thing getting hot enough that any fuel stored in a chute will ignite; so it's not continuous self-feed, but rather continuous tending.

I also still think some sort of heat exchanger on the uptake pipe can be used to get more of the heat out of it. Experimentation will show if there's enough draft to drive it through some sort of concentric can or maybe a donut of stove pipe.
The rocket stove will produce the energy, and it'll get hot itself, but I believe lots of heat will go out the pipe, if some extra air surface area isn't offered to transfer heat to the room air.
Hmmm... Another idea to that: if it's cold you'll want such additional heat, but if it's a hot day you might want to remove the heat exchanger and run straight pipe outside immediately after the hot plate? Experimentation...

I hadn't thought about adding mass. Some household woodstoves have had removable tile/bricks for bedwarmers, and many have fire brick liners which will act as heat sink. If cartage weight isn't an issue (truck or stationary as opposed to going along with a tent), something could be arranged.
If nothing else, firebricks to set on the hotplate after cooking is done.

It'd be lovely to cast it out of refractory... Insulate the burn tunnel a bit to help it start drafting, but for a vehicle or stationary use, make it a massive heat sink.
Kathleen Sanderson
pollinator
Posts: 1305
Location: Green County, Kentucky
116
posted 11 years ago
I just spent some time searching and found the tiny rocket stove I was looking for!  I'd like to see a diagram of how to build it, and what diameter it is, but can probably figure it out.  See the top picture in this PDF file:  http://www.rocketstoves.com/pdf/cooking.pdf

The guy has it in his office, but it's small enough it would fit almost anywhere.  (I KNOW I've seen color pictures of that thing somewhere, though!)

Kathleen
ronie dean
Posts: 631
Location: NW MO
5
posted 11 years ago
That is one cool office stove..  It would add a lot of weight to carry around in a camper and most likely would crack every time you hit a pothole or bump.

The sheet metal (steel) that John mentions is most likely what you need to use. Also be on the lookout for a steel tray to set the whole thing on (like a cookie sheet but bigger).

If you can find materials in a scrap yard that fit your needs they might be heavier and last longer. I use large coffee cans and large juice cans and use and abuse them terribly and they last a couple years.

Posts: 12
posted 10 years ago
Somebody writing about a project like this (metal & cans):

I don't think you need to register to view... but it's worth it for the entire site.

(edited)
Sort of what I'm trying for 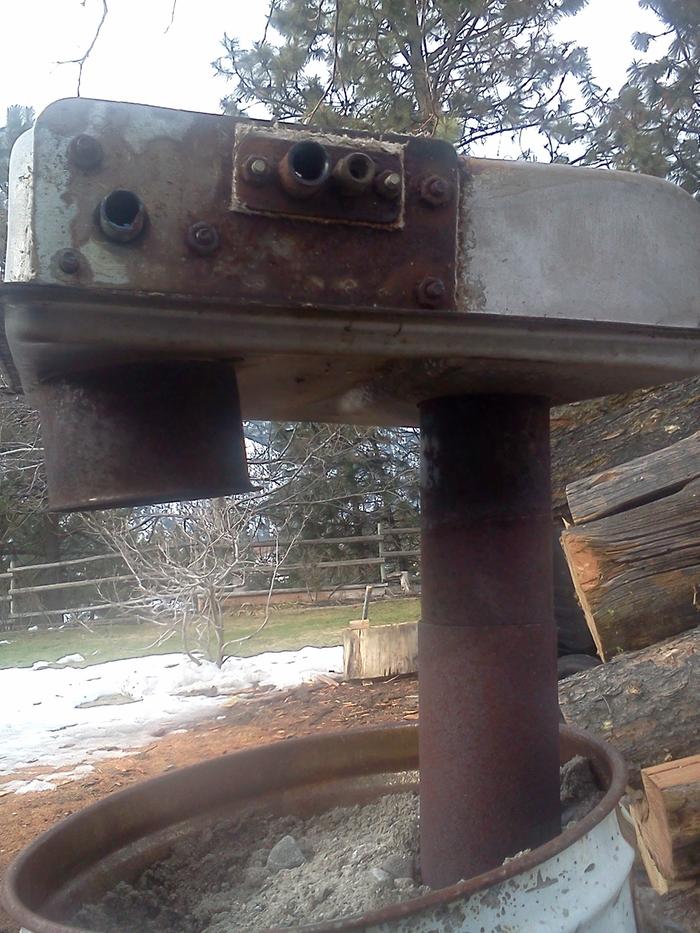 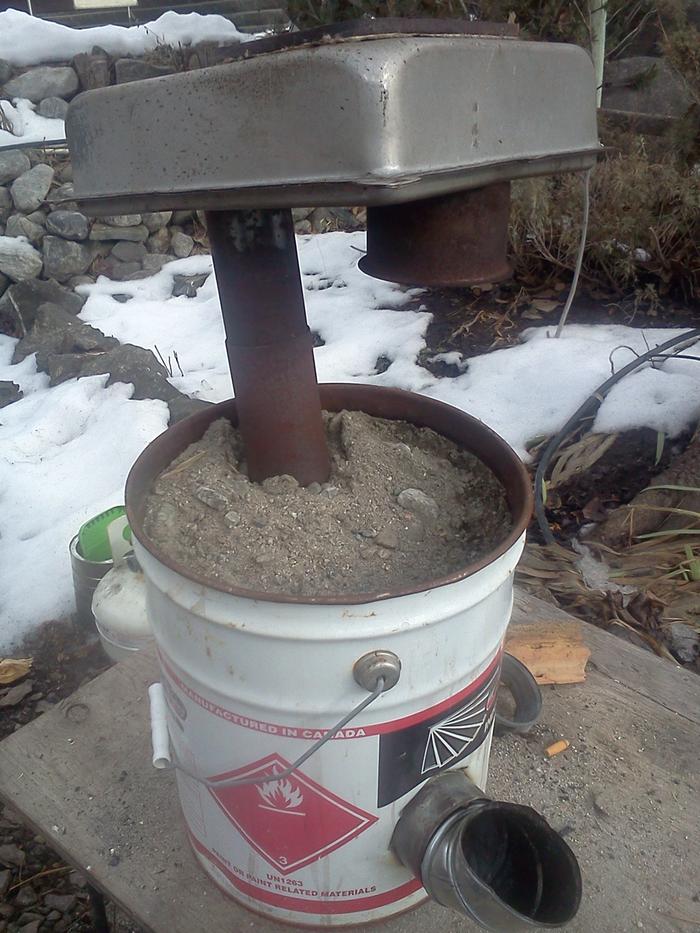 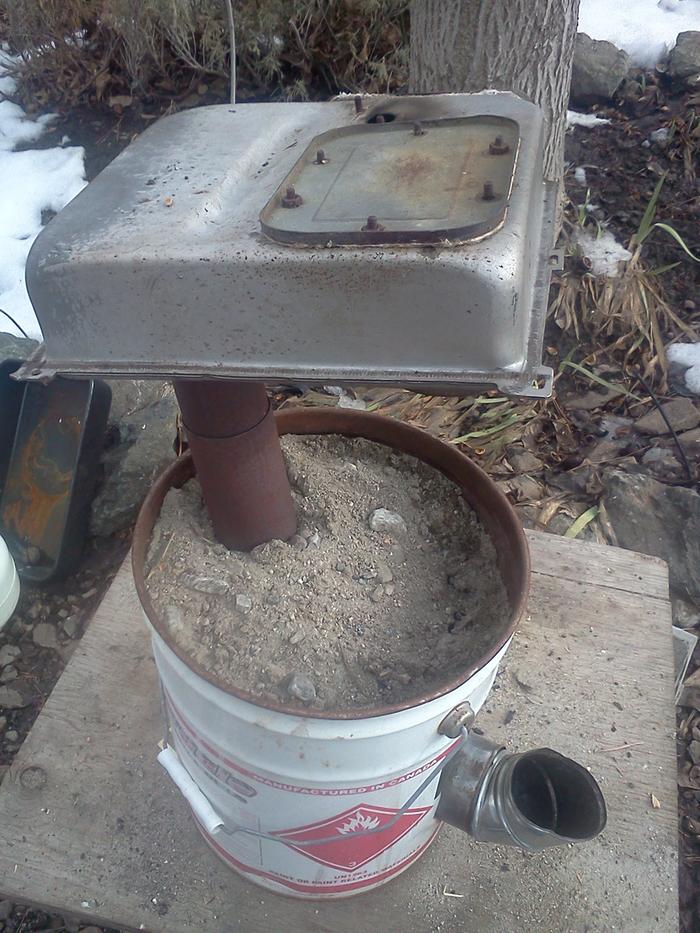