Brendan Biggar
Posts: 13
posted 7 years ago
Im interested in what type of plant this is because it is doing extremely well and I havent touched it. Would be nice if it was beneficial. Any help putting a name to this would be much appreciated
20130830_113957.jpg 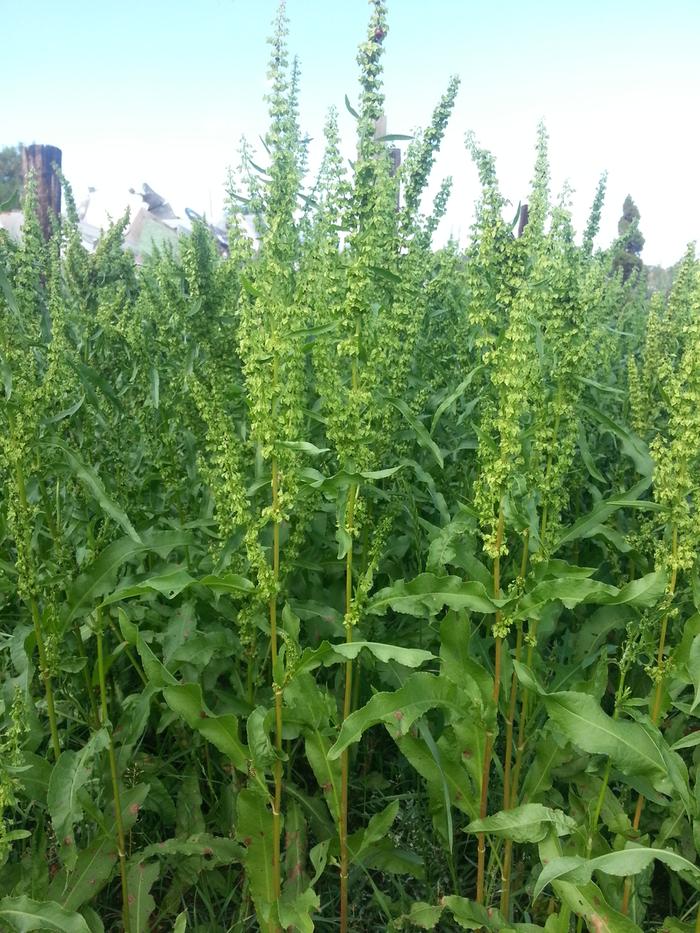 Dorcas Brown
Posts: 23
Location: west central Missouri
posted 7 years ago
Most Dock is somewhat acid. The young leaves can be used in salads or as greens. When cooked they are an unappetizing gray so I usually mix them with a mix of wild greens. The leaves pictured would probably be tough. The roots have been used medicinally in the past. The seed can be used as grain. My own experience has been as greens for salad or lightly boiled and many have tried my mixes without complaint.
wayne stephen
steward

Posts: 1748
Location: Western Kentucky-Climate Unpredictable Zone 6b
106
posted 7 years ago
Garden Sorrel is in the same family - Rumex - as Curly dock . I have eaten dock early in the spring . Resembles the Garden sorrel I grow in my garden. I will cut up dock , dandelion , volunteer rochette , chickweed in my spring salads. Dock roots are used medicinally. They are not invasive and are a great help in healing disturbed soils.

posted 7 years ago
What's your location?


From the picture; I'm guessing somewhere in the pnw. Roughly 70 miles from the ocean and about a 795 foot elevation.

(Give or take a few thousand miles and several hundred feet)

posted 7 years ago
Birds also like rumex seeds. And it's a dynamic accumulator

Denice Moffat
Posts: 36
Location: U.S.A.
1
posted 6 years ago
Dock is fairly high in oxalates and is considered a noxious weed for livestock just so you know.

posted 6 years ago
Definitely dock as everyone has already said. I just wanted to mention that while it is not something you want to eat a lot of (for reasons already mentioned) it has always been on the spring greens list for people in my neck of the woods (Ozarks). Most folks mix the young leaves (Stress on young! As in small leaves -- under 4" is usually best) with similar sized leaves of poke and dandelion greens before cooking. Cook them in at least 2 changes of boiling water (drop them in after the water is boiling, and go from one boiling pot to another -- never cold water heated with greens in it or they will retain their bitterness). They are really quite good as a cooked vegetable with only a bit of salt and pepper and butter added -- especially after a long, cold winter without much in the way of fresh greens. They make a great spring tonic!

I also wanted to note that while they may be considered a noxious weed for most livestock, goats will nibble at them. Don't expect them to eat a lot of it, or to take down the mature stalks, but they do like the young leaves when they first begin sprouting. And, if you have chickens, those heavily seeded stalks go over nicely with them. I worry about them getting too many, but when I clear out weeds in my garden, I toss in a couple of the stalks along with any damaged turnip greens, mustard, lettuces, dandelions, borage and a lot of lamb's quarter I pull up. They love their daily salads!

posted 6 years ago
it's yellow dock, aka curly dock (same thing) like everyone says.

i personally dont eat the leaves but i do harvest the roots, grate them with a cheese grater and add to tea blends. the root is good for many things medicinally, and i would rather pull them up to weed them out as they spread a lot.
glenn thomas
Posts: 5
posted 6 years ago
Rumex crispus Curly Dock
Zach Muller
gardener

posted 6 years ago
Recently I found a few of these seed stalks infested with bugs, so it was a huge hit when I chopped it and threw it in to the chickens. I was wondering why some were covered in bugs and others not at all because if it was consistent it would be a very efficient way to collect a big mass of bugs.

I was under the impression that the dried seeds were safe for chicken consumption: Is there a limit to how much I should feed to them? Would it be better to leave the stalks standing and let the chickens decide?
Deb Stephens
pollinator
Posts: 643
Location: SW Missouri, Zone 7a
127
I like...

Zach Muller wrote:
I was under the impression that the dried seeds were safe for chicken consumption: Is there a limit to how much I should feed to them? Would it be better to leave the stalks standing and let the chickens decide?

Zach, I have never found it to be a problem for my chickens. I only wondered if it might be safer to give them in moderation because of the oxalic acid content in the stems and leaves. I don't know if the seeds contain any at all -- just erring on the side of caution, I guess.
Matu Collins
Posts: 1947
Location: Southern New England, seaside, avg yearly rainfall 41.91 in, zone 6b
79
I like...

posted 6 years ago
Wild birds really enjoy the seeds and a wildlife biologist friend of mine has told me that they are good nutrition.

“Enough is as good as a feast"
-Mary Poppins

Matu Collins wrote:Wild birds really enjoy the seeds and a wildlife biologist friend of mine has told me that they are good nutrition.


Yeah, after discussing it here I went to do a bit of research and found that Rumex species are related to buckwheat. Apparently the dried and ground seeds make a nutritious flour. I think it may be on the heavy side (like buckwheat itself -- or for that matter like rye or even whole wheat), but in a blend with a lighter flour, I bet it would be really good. I know I am treating my curly dock with new respect at this point, and can't wait for those seeds to get ripe so I can try making flour (and hopefully some bread) from them! And to think I just treated them like weeds.

Rebecca Treeseed
Posts: 6
Location: New Mexico
1
posted 6 years ago
Curly Dock. They make tons of seeds which I collect and grind to add to bread. I add finely sliced baby leaves to soups before serving. I don't eat excessive amounts of anything... variety is best.