I am stuck in the tulsa area. alot of the turnpikes and highways are shut down. they are saying that this was the biggest blizzard in OK history. (this is ok remember so that probably doesn't take much compared to what alot of you guys get, but they just don't have the kind of resources set aside to deal with this stuff around here) okc got the worst of it. it wouldn't be so bad if it hadn't sleeted and iced for several hours before the snow arrived. now its inches of snow on top of inches packed sleet and ice. a dry powdery snow would be much easier to commute on.

it looks like the area where we live probably didn't get that much and will even get above freezing today, but getting back down there could be difficult! the goats are loaded with hay and have de icers in their water but I still worry.  we tried to leave last night in my dh's toyota truck and couldn't get out of the driveway. the front wheels just slid into the ditch as we tried to back up the hill that is the drive which is also on a sideways slope. he and his dad spent an hour getting it out and we just stayed here for the night. we are all packed and prepped for a day spent in the ditch but I really don't want that to happen!

Gwen Lynn
Posts: 736
posted 10 years ago
Oh, would that you could! I'm afraid we're stuck with this crap for a while. It's not going to get above freezing here (in NE Okla.) today. The longer it's here, the harder it will be for us to get above freezing. Leah is correct, the resources to deal with this are not here and neither is the skill to plow it. Our neighborhood streets are untouched by plows and will likely stay that way.

Oklahoma doesn't get nice, picture perfect pretty, sane snowfalls. They are usually part of hellacious storm systems that are accompanied by storms and thunder and lightning often are involved. I will never forget a storm with snow and thunder. Just weird. Here are a few pix from my yard. Fortunately, we only got around 7" with no power outtages. OKC fared much worse. They got 14".
000_1300.JPG 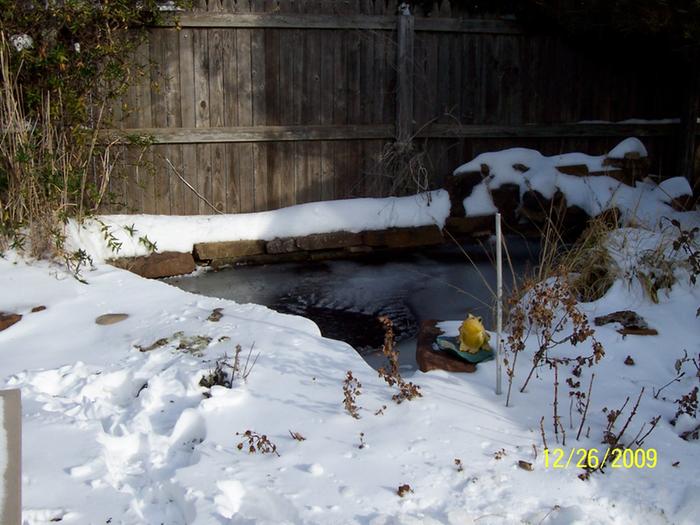 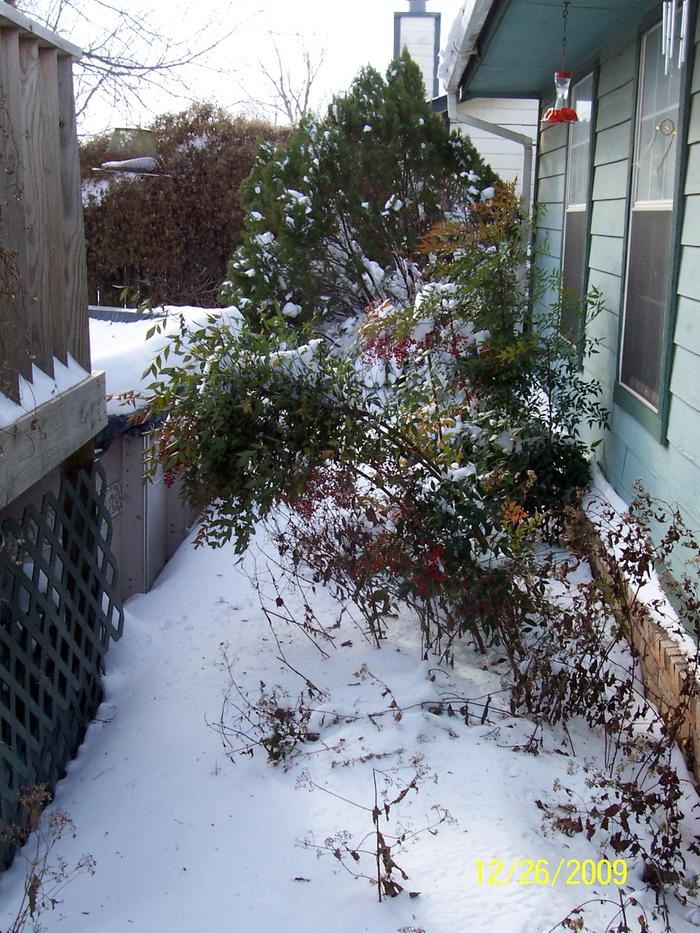 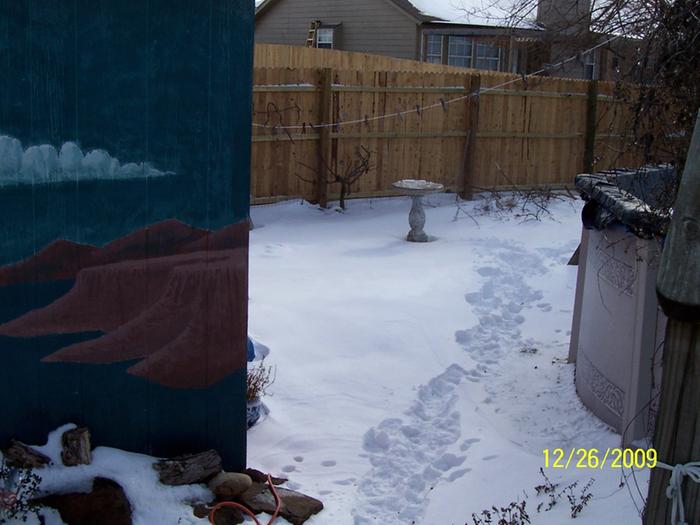 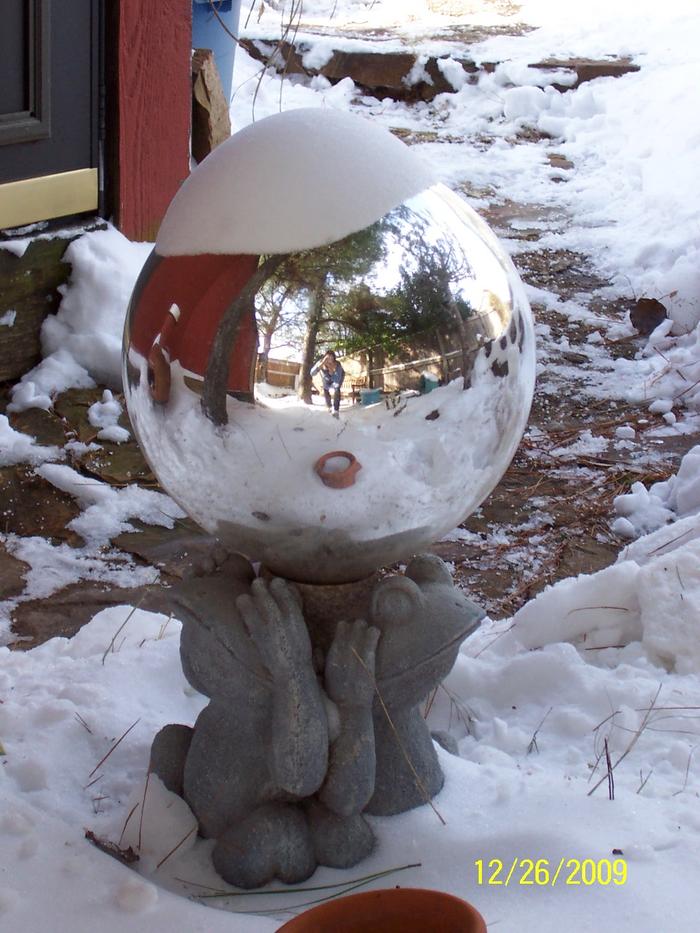 Leah Sattler
Posts: 2603
51
posted 10 years ago
well. we made it back christmas day. once we got on the muskogee turnpike it was fine. why they can manage to clear the turnpike but not the free highways ? oh yeah. cause we pay them to!!! by the time we were down to I40 it looked like just a dusting of snow. it prettty much melted of down here already.

I'm sorry gwen! I know you hate this stuff. it is pretty miserable sometimes. at least there wasn't widespread power outages.

Gwen Lynn
Posts: 736
posted 10 years ago
We are managing all right, though I have a feeling there won't be work for Dan tomorrow. We got out and about yesterday and it wasn't completely horrible, just somewhat horrible.

I motivated dh to shovel off the driveway. There was a 2 foot drift between the cars. He was not thrilled about doing it (my attitude is, "hey...you like it soooo much, GO DEAL WITH IT!"

) but afterwards said that he was glad and it was nice to be able to walk around unencumbered by the snow. Birds are going thru seed like crazy! I got a new bird feeder for Christmas. Half the motivation to get out yesterday was needing more bird seed!! Crazy, I know.

So it's all melted down by you! Guess we need to move further south. Let me know when you're ready to lease a small chunk of land!

posted 3 years ago
I feel for you. I live up in the end of the Panhandle. I watch all the summer ick march up through the central urban part of the state (Tulsa, OKC, Enid, Norman) and head for St. Louis MO and later Chicago. Then in the winter the snow and ice storms.

I grew up way north where a good snow was two feet and blizzard was highs of -30f and 2-3 days of white out and horizontal snow. You had to go shovel your roof every 8-12 hours (45 degree pitch) to keep your rafters from breaking. I started moving farther south and warmer. At Colorado we divided up chores and I took shoveling snow. He took take out the trash. This meant I had to pay up several times a season. And at the one place we had a two car wide four car long driveway and a sadistic plow driver that would bury your driveway mouth... (once we knew it was going to snow so we put a car in garage. At 6 am it was flaking, garage door open, hubby warming up the car and I'm out there bailing snow with the shovel. One of his coworkers lives up the cul-de-sac and drives by to see me tackle the plow ridge at the street. He had lunch with that coworker who asked HOW DID YOU GET YOUR WIFE TO SHOVEL??? It was her chore. A few days later I went to eat lunch with him, and the fellow asked me and couldn't believe the answer was the same. I'd finished getting him to the street and went back to bed. Nice warm bed)

We moved here. I deliver on that chore a lot less often, but still. We got the '50 year blizzard'. Category to them: catastrophe. Me: good snow. We bought a cord of wood the day after that one stopped and the two strapping young men that came to deliver it were amazed as I took shovel and cut them a path 4" wider than their loaded dolly straight from their trailer to where I wanted it. It let us have an inch for white Christmas, and two feet for New Year's. This last spring it gave us a repeat except it did it at the end of April and broke all the trees out. I preferred the Front Range where the Peak would get white but not below about 8000 feet. Often. Issue is when a big urban gets hit and people aren't used to driving in white, ice, and black ice for months at a time, just dibs and dabs, so they never really learn. The thing that's strange here, everyone doesn't have a snowmobile. Where I grew up, if you had one of those you could still get out if snowed in and get to town.

Don't mention power out. We're the end of a feeder line. Buy any and every lineman (or woman) you know or meet, a nice dinner. Thank them for being up there on that pole in the middle of the night in 60mph for two or three days to get your power back. The same storm you mention got us for 47 hours and 50 minutes. The one this spring, I was on a long distance trip so I don't remember how many days but it was  less than the six they originally guessed.
Todd Parr
pollinator
Posts: 1793
Location: Wisconsin, zone 4
95
posted 3 years ago

Deb Rebel wrote: Category to them: catastrophe. Me: good snow.

This made me laugh.  People that live here in WI think it's pretty hilarious when someone gets 6" of snow and it shuts everything down.  If it worked that way here, we would all stay in our houses 6 months a year

posted 3 years ago
Some places it takes an inch to close everything down and they have zero snow moving equipment.

Here I love watching people from Dallas curl up in parkas and whimper miserably at 50f. I've been stuck with layover overnight at Dallas in early August. That is an incredible heat that I wouldn't have believed until I experienced it. I understand now why someone used to living in that would curl up in what I still consider shirtsleeve weather.
Todd Parr
pollinator
Posts: 1793
Location: Wisconsin, zone 4
95
posted 3 years ago

Deb Rebel wrote:Some places it takes an inch to close everything down and they have zero snow moving equipment.

Here I love watching people from Dallas curl up in parkas and whimper miserably at 50f. I've been stuck with layover overnight at Dallas in early August. That is an incredible heat that I wouldn't have believed until I experienced it. I understand now why someone used to living in that would curl up in what I still consider shirtsleeve weather.

I lived in Phoenix for 12 years or so before moving back to Wisconsin, so I can relate.

posted 3 years ago
Yes, more snow! I know it's an old thread and most people hate the snow, but I'm starting to get excited. We got our first snow about a week ago, just enough to clean up the mountain tops and give us some good scenery.

A while ago I realized it's much better to live in a place with a lot of snow and the city's prepared to deal with it than live in a place where it barely snows but the city panics at the very idea of it. Last year it snowed about 50ft in total here, but there was never a day I couldn't get around and accomplish whatever I wanted. Contrast that to some of my friends who lived in Portland and spent most of the winter in a state of infrastructure emergency over a decent winter. But you know as they say in Portland, it never snows in Portland, so there's no need to invest in plows or pass chain laws (it snows every single year).

All that being said, snow is still a bit of a love/hate thing for me. It's fine when I'm here in my house at the city and can walk around or drive on plowed roads, but I'm still working on consistent access to my ranch, which is 12 miles down an unplowed forest road. The good news: it sits adjacent to and below an old abandoned ski resort so getting there is easy. The bad news: have you ever tried to snowshoe up a ski run? This year I'm going to make more of an effort to spend more time there in the winter and get better at un-stucking my snowmobile. It may be 12 miles down an unplowed road, but it's only one mile straight up a mountain…
IMG_2141.jpg
IMG_2332.jpg