Meghan Orbek
Posts: 52
Location: Yonkers, NY/ Berkshires, MA USA
2
posted 9 years ago
One of my lovely fellow Holzer students got me into landrace seeds this past April at our seed swap and I've gotten a little obsessed. (Landrace definition)

She gave me landrace kale, quinoa, and flour corn...

Why isn't there a larger presence of people sharing their landraces online? Am I missing something? I've found almost none. Is this representative of an absence of landrace cultivation? I know that many of us may casually create narrow landrace varieties in our gardens, but preserving and selecting for hardiness to regional conditions while still maintaining a wide breadth of genetic diversity takes either deliberate intention or unusual negligence over many years. All of the people I've recently spoken with have never heard of the term and are more apt to select and cultivate their own specific varieties from volunteer plants rather than go landrace.

But, oh! 'Tis the wave of the future, my friends! (...and also the past...) Heritage and Heirloom seed banks are a fine thing, but how much longer till we establish seed banks of regional landraces developed over many years to be perfectly suited for our specific conditions? I may be imagining it but I'm pretty sure that's a thing Wendell Berry suggested at least 20 years ago. (Anything he suggests makes my heart pitter patter. <3 Agrarianism)

With the internet (of which I am not so well versed) there is so much potential here. Landraces can be expanded in their genetic diversity by being combined. Folks who have solitarily been developing or preserving landraces in their region for decades can share with enthusiasts of younger generations (ahem! hint hint). Landraces can be collaboratively preserved for different regions (ie Massachusetts) or conditions (ie high or low altitude).

Does anybody share my unbridled enthusiasm for this task/quandary? Perhaps we can start here? Okay I'll get off my soapbox and go take some deep breaths and drink a glass of water...

Check out Martin's book on seeds The Unlikely Peace at Cuchumaquic: The Parallel Lives of People as Plants: Keeping the Seeds Alive http://www.amazon.com/The-Unlikely-Peace-Cuchumaquic-Parallel/dp/1583943609

I believe Adaptive Seeds is an example of what you are wanting Uprising Seeds is another example. Both are for West of the Cascades (Oregon and Washington).

Jonathan 'yukkuri' Kame
Posts: 488
Location: Foothills north of L.A., zone 9ish mediterranean
7
posted 9 years ago
I am a member of the Seed Library of Los Angeles (SLOLA) which primarily meets in Venice Beach on the westside of Los Angeles. The intention is to develop a library of locally adapted seeds and they are a few years into the project.

I live on the north side, and though we are maybe 20 miles away, we are in different climate zones. So, SLOLA is opening a second library in San Fernando Valley, which is much closer to me. This area will be it's own 'seedshed' (think watershed), with seeds adapted to this microclimate and differentiated from the 'main library' a few miles away. So we are talking about ultra-local seeds.

But the emphasis at SLOLA is still on preserving specific varieties (heirloom or just open pollinated) with their characteristics, just more locally adapted.

Overall, I think many permies ARE growing landraces, just not under that name. For example, Mark Shepard's STUN techniques (sheer total utter neglect) and Fukuoka's 'throw seedballs out there and see what grows' are very much about developing landraces, even if they aren't explicitly called that.

Meghan Orbek wrote:Hi Victor,
I too am interested in landrace gardening and I started a thread on it here:https://permies.com/t/26015/plants/Landrace-seed-gene-pool-preservation

It seems some folks are intentionally breeding some plants with very high genetic diversity in the same spirit as landrace development. The people over at Oikos are doing a bit of that. You may want to check them out.

Huh--I did a search on 'landrace' before creating this thread and don't remember finding yours. Looks like it's getting about as much interest as this one...not much.

Oikos rocks. I get stuff from them every year. It seems like there is increasing disillusionment with the establishment breeding practices that result in clonish monocultures. Robust diversity within (as well as between) species is necessary for a system's resiliance. We need more promiscuous plant sex and less plant eugenics! I have noticed that more and more people are bailing out of the "order your seeds in a packet from a seed company every year" mentality and are moving toward a more regionally appropriate agriculture. Decentralization is always good. A seed library just opened here in Fairbanks, and there is one guy who is selling locally produced seed. I'm gathering germplasm now to devise some locally adapted landraces.

Have you ever heard of Raoul Robinson? I just stumbled upon his work:

I haven't read much, but it seems like he has a lot of information relevant to the subject.

SSE is responsible for spurring a lot of what's going on now in the "alternative" seed scene, and has inspired the formation of many local exchanges. There's been political drama there and some heavy hitters are no longer associated, but it's a great resource. My yearbook came in the mail yesterday and I'm starting the list.

I am also working on a tomato landrace.

See this thread from my brassica project. https://permies.com/t/32351/plants/plan-breed-perennial-brassica

Posts: 5767
Location: Cache Valley, zone 4b, Irrigated, 9" rain in badlands.
2363
posted 7 years ago
I have been working for about 7 years at converting all of my crops to locally-adapted landraces. I'm currently growing about 70 landrace varieties for about 55 species. Some are more locally-adapted than others. Some are still very tentative: Maybe producing more seed than went into the ground on a good year... Others are well adapted and perfectly suited to my taste preferences, and way of doing things, and the local environment. I think that this is the third year that I have grown just about all of my own seed. I start out by calling a mix of varieties a grex, or a mass cross. After a few years I'll start calling them a proto-landrace. Then, when they get really well adapted to my garden, and have a lot of genetic diversity going on I'll call them a landrace. They gotta be closely aligned to local conditions, and to the farmer's way of doing things before I call them a landrace.

About 60 varieties of muskmelons may have contributed genes to my muskmelon landrace. Only about 3 plants grew well the first few years. They went on to form the foundation of my landrace muskmelons. 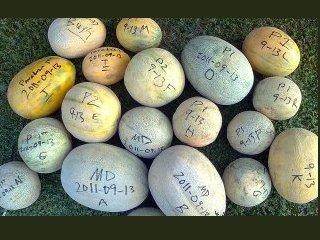 I trialed about 80 varieties of beans, only about 20 of them survived the first growing season, but they hybridized and I trialed more, so my bean landrace currently contains about 100 varieties: All of them do well to really well here. 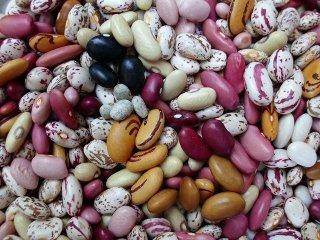 Many hundreds of varieties may have contributed to my corn and watermelon landraces. I really like the yellow-fleshed melons, and expect to transition to a mostly yellow population. 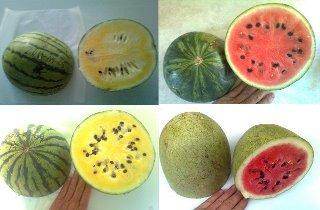 About 6 varieties of spinach contributed to that landrace. Around 12 varieties were trialed, but half of them were totally unacceptable. I ate my spinach landrace for lunch today... Mmm. Mmmm. Mmmmm. After I fed my sister's family spinach that was full of worms that were hiding inside wrinkled leaves, I started chopping out all wrinkly-leaved spinach plants before letting the rest go to seed. Last time I trialed a commercial variety of spinach it got about an inch tall before it bolted. 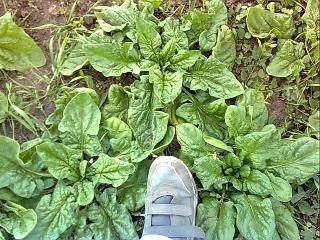 I'm not keeping any varieties pure and true to type, but I am keeping the genes around for many thousands of varieties.

Tomatoes are a crop that tends to do very poorly for me. When I trial tomatoes from far away, I get about 90% failure rates. People really want tomatoes, so I'm working on converting my tomatoes to a promiscuously pollinating population so that I can play the genetic lottery more frequently and with less effort. I expect that they will also end up being yellow-fruited, because I really don't like the taste of lycopene which makes watermelons and tomatoes red. That will be the hyper-local adaptation to the farmer's taste preference. Because even though my market wants red tomatoes, eventually I will grow mostly yellows because they are not so gaggy tasting to the farmer.

An early proto-landrace of tomatoes. 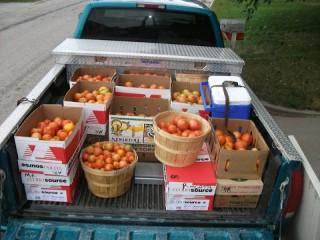