Ashley Handy
Posts: 108
3
posted 7 years ago
So I work at a local public library in Gadsden, AL. We do this fun science class with the kids every other Wednesday called "Wacky Wednesday." I wanted to do one on trees, and I thought the experiment could be grow your own avocado tree since they are so easy-a seed, a few toothpicks, some water, and a clear cup.

My question is: Can you still get an avocado pit to grow if it has been stored, and if so for how long and how to you store it? I just think it would be easier to save my avocado pits as I eat my avocados over the next month, but if that won't work that means I'd have to consider buying as many avocados as the number of children that will be present and cut them all open on that same day.

Lisa Paulson
Posts: 258
posted 7 years ago
No advice really but I put a pit suspended with the bottom in a bottle of water for a few months and it did not root, checking it today I saw the water had dehydrated and I also have no idea if it will remain viable but I replenished the water and simply will keep trying . Next fresh avocado I think I will try as well. Good luck.
Ashley Handy
Posts: 108
3
posted 7 years ago
Yeah you have to make sure the bottom portion of the seed stays submerged in water. It also helps a lot if you will sort of nick the bottom, just kind of scrape off the outer skin just a little. Good luck!

Lance Kleckner
Posts: 123
Location: West Iowa
2
posted 7 years ago
I would think storing them in the fridge would work all right, maybe store them in container in there, so don't dry out as fast.

Natty Zickuhr
Posts: 10
posted 7 years ago
Any reliable info on sprouting avocados would be helpful. I have tried many times and followed the instructions of several websites (basic gist - toothpick pit, lower half submerged, put in warm sunny place)...never any results. All I grow is algae. I've tried peeling the pits, different water depths, adding liquid fertilizer, and burying them in a potting medium. No roots. What am I doing wrong? Is there a minimum germination temp?
Mickey Kleinhenz
Posts: 32
Location: Houston, TX
posted 7 years ago
Definitely focus on temperature and humidity. I did an experiment a couple months ago where I had some in the utility room, some on the windowsill(toothpick version) and some outside. The utility room pots germinated and the others didn't. I think it was the moist heat that the dryer puts off. Good luck.
janet jacobsen
Posts: 45
posted 7 years ago
I have avocados growing in my compost pile all the time, a friend pulls them out and plants them when they are about 2 feet tall. I guess my compost stays warm and moist so the avocado feels right at home!


After some experimentation, we found that the sphagnum bag method was easier and more reliable than the more common practice of puncturing the avocado seed and suspending it in a glass of water. (See The Secret of the Sphagnum Bag, page 8.) Germination time varies with each pit, but the average time is a few weeks.

When the roots are 3 to 4 inches long, transfer the avocado to a pot 1 inch larger than the pit. Fill the pot one-third full with potting soil. Gently place the pit on the soil and fill in enough soil around it so that half the pit is exposed at the top. Place the pot in a warm, bright spot (avocados do not require direct sunlight). Once established, avocados grow quite rampantly. Keep the soil moist, but not soggy, at all times. During their natural resting period from October to January, avocados need less water. As soon as the days lengthen, new leaves will appear and you should give them more water.

Fill a quart-sized, sealable plastic bag with barely moist, long-grained sphagnum moss. The moss should have the consistency of a good unbaked pie crust and should not drip when squeezed. (Long-grained moss is available at most garden centers; if you can’t find any, use regular peat moss.) Place the seed in the bag, making sure it is completely surrounded with the moss. Seal the bag and place it in a warm, dark spot. Check the bag several times a week to make sure there are no soft spots on the tuber or root, or mold on the seed. If it is too dry, add water; if it is too wet, leave the bag open for a day. Seeds or tubers raised in the sphagnum bag will have to be hardened off.


To harden off she says to punch holes in the bag a week before transplanting. She also said she had better germination rates with "Florida" avocados than "Californian (Haas)" avocados. Good luck!

Natty Zickuhr wrote:Any reliable info on sprouting avocados would be helpful. I have tried many times and followed the instructions of several websites (basic gist - toothpick pit, lower half submerged, put in warm sunny place)...never any results. All I grow is algae. I've tried peeling the pits, different water depths, adding liquid fertilizer, and burying them in a potting medium. No roots. What am I doing wrong? Is there a minimum germination temp?

Natty - I've tried to grow avocados the 'toothpick way', too and failed miserably, but then I started using a 20 oz. plastic water bottle, cut about in half and top inverted into the bottom. Place about 10" of clothesline or similar to act as a wick from the top and wind into the base, fill base with an inch or two of water, add a square of paper towel to hold back your soil in the top part. Snap the two pieces together. Place you avocado pit wide/flat end down, pointed end up into the soil in the top part. Place in a bright area and check your water level at least weekly and do not let dry out. Sometimes it will take weeks for your pit to sprout, but so far, using this method, I've had 100% success. I snip/pinch of the top of the new sprout at about 1-3" up, to help inhibit a spindly plant and further develop the root system. At about 18'' tall and leafed out nicely, I can plant in a regular pot or ground and let it take off. I think, some people don't realize how long an avocado seed can take to sprout and give up prematurely, another long too sprout plant is turmeric, at $8/lb. everyone should be growing it and taking it for their health.

posted 7 years ago
Somewhat off topic:

Are you aware how long it takes to get an avocado tree to produce? Or how finicky they are as to where they will flourish? I had considered land in Fallbrook CA (Avocado capital) and quickly realized, I would want to buy an established orchard not plant one. My spouse wondered if I would try to green house some here in central VA; I said no, due to how long it would take to even hope for a crop.
Cd Anderson
Posts: 16
posted 7 years ago
We've only had success getting Mexico avocados to sprout, I'm pretty sure the other varieties we can buy around here are GMO'd and designed not to sprout. Same issue with potatoes, only the organic potatoes will sprout, the others are sprayed with something that inhibits eyes so they just wither and mold.
C Quint
Posts: 19
Location: Northeast Tennessee
posted 7 years ago
I just found two growing very successfully into 12" trees in our compost heap in northeast Tennessee. They are in the woods.

Tina Mesenbrink
Posts: 1
1
posted 1 year ago
I used toothpicks around the avocado seed and put in enough water so it's bottom was just under the water.
It sits in the basement and the only light is from are egress window.
It took about a month for it to start growing roots.
And about 3 or 4 week before I could see a stem starting to come through.
I will be adding more pictures of it getting bigger.
Right now it starting to get some leaves on it.
And the temperature in my basement is about 64-66 degree during the warmer months.
In the winter time the temperature is about 60-63 degree.
So far I haven't had any problems with it .
I'm hoping it will do fine in the basement during the winter months. 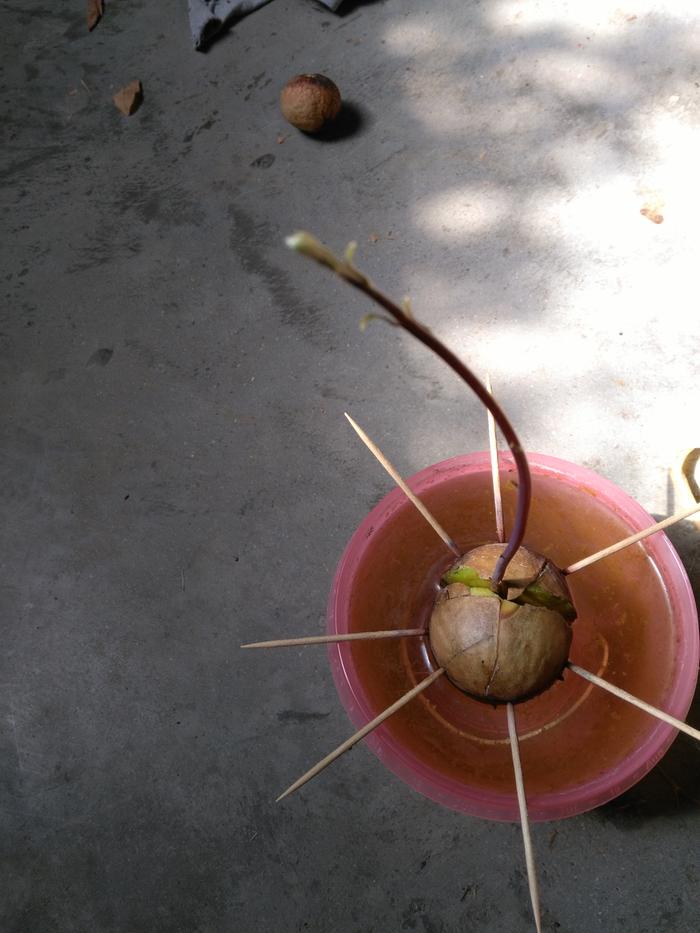 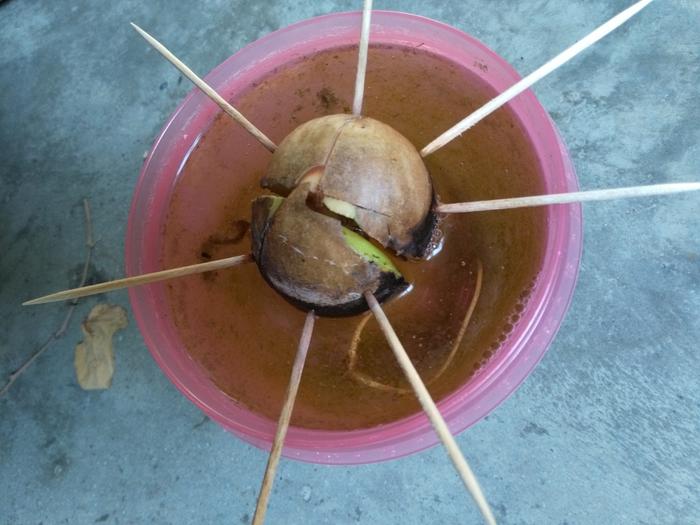 Are you aware how long it takes to get an avocado tree to produce?  Or how finicky they are as to where they will flourish?  I had considered land in Fallbrook CA (Avocado capital) and quickly realized, I would want to buy an established orchard not plant one.  My spouse wondered if I would try to green house some here in central VA; I said no, due to how long it would take to even hope for a crop.

I’ve read it’s around seven years. And they’re very finicky about soil, temperature and environment. I tried them in my Mediterranean climate and they failed pretty fast: sun was too harsh so the leaves all burned, not enough humidity so they dried out, soil was too heavy so the roots didn’t grow. My Japanese plum trees and pomegranate right next to the now-dead avocados are thriving.

Avocados don’t grow true to type. You have to graft every single tree with the branch of a known cultivar. If you grow new seedlings without grafting you’ll get new types that most likely produce inedible avocados after waiting around seven years, if at all. Buying an established orchard makes a lot more sense. Compare that to something like figs, which are grown by sticking a cutting in some soil and it’ll start producing figs as early as two years old, and the cuttings can be cheap or even free to obtain. For a humid warm climate you can grow mangoes from seed and true to type. It takes about seven years to fruit but they’re less finicky than avocados.
Richard Stromberg
Posts: 74
11
I like...

posted 1 year ago
Skip the toothpicks and water... Just get some potting soil and plant the seed an inch underthe top. Keep moist dont let it get frosted.

It is better to be kind than right.