Ruth McMillin
Posts: 1
posted 7 years ago
My son mentioned that he has seen an example of permaculture down in Santa Barbara which uses rocks piled up, and the plants all grow coming out the cracks between the rocks. This sounds very appealing to me, since I have areas in my yard here in surburbia that could do with rock berms and some food crops, and I have mossy rocks I need to move and do something useful with. So maybe I could pile up some old redwood boards and my abundant oak leaves and build a rocky structure? Anyone know of this technique and what it is called?
Roxanne Sterling-Falkenstein
pollinator
Posts: 122
Location: Cave Junction, Oregon
5
I like...

posted 7 years ago
I have used rock mulches when I lived in San Francisco to keep cats from digging up my plants..in front of our restaurant to safeguard my potted plants from extremes and have seen it used in dry climates quite a bit. It offers a few benefits like temperature regulation, soil shading, and soil protection. I'm sure there are more benefits i did not mention. My rocks are not usually laid very deep, usually only a few fist sized rocks deep with smaller ones between & a few big ones next to big plants or trees that need temp regulation.. I won't be surprised if people do it deeper, I saw a picture of someone using them to blanch dandelion greens. I'd place leaves under the rocks and use the redwood boards as edging. Rocks also are great for propping up weak plants anywhere. Hope that helps...rock on..ha ha
Roxanne
aka Wilde Hilde

AKA Wilde Hilde
S.Oregon High Mountain Valley 8b
"Ensnar'd in flowers, I fall in the grass."-Marvell

john pannacciulli
Posts: 2
1
posted 7 years ago
Although I prefer traditional low water gardening techniques. I find myself constantly
amazed how plants typically brambles are very vigorous in my gravel beds. One time I visit a friends' shop located on a gravel pit in which some contractor dumped rubble from a cinder block garage demolishing. The owner must have been an Italian who kept a garden near the former garage as I saw loads and loads of heirloom tomatoes which sprouted from leftover seed mixed with concrete and rubble and building blocks. that season was so dry, none of my own tomatoes did well as our town implement strict outdoor watering restrictions. It was nice to have a secret supply of delicious tomatoes free for the taking. They thrived despite the hot dry summer and no water source for at least 1/4 mile. So I have witnessed that this type of cultivation does seem to be possible, even if by accident!
Joanne Gross
Posts: 17
Location: Eugene, OR, USDA zone 8b
posted 7 years ago
What you're talking about sounds like a rock garden, not hugelkultur. A popular way to make a rock garden is to make a berm of soil (you can use your boards to make a raised bed if you want), stick a bunch of rocks on the berm (large rocks are usually partially buried), tuck plants around and in between the rocks, and then mulch with something that looks nice with the rocks, like pea gravel. The rocks hold a lot of heat, reduce water evaporation from the soil, and create warm, protected microclimates that are especially good for things like sedums and Mediterranean herbs like rosemary, thyme, and lavender. I suppose you could hugelkultur it up by burying some wood and other organic material under a raised rock garden.
Brenda Groth
pollinator
Posts: 4437
Location: North Central Michigan
26
posted 7 years ago
there is a book I have that suggests gravel mulches and heavy use of rocks, but with soil below..a lot of plants grow well around rocks, esp the prunus varieties of fruit trees

posted 7 years ago
It does work.
You can mulch with rock indeed, with soil underneath.
I will try it with flat stones here (to be able to move them).

No need to spoil a good garden by burying rocks though!

Posts: 7926
Location: Currently in Lake Stevens, WA. Home in Spokane
318
posted 7 years ago
AND, rocks will collect dew, which will drip into the soil beneath.

posted 7 years ago
Yes but... what is the day and night temperature difference needed for dew to form?

Or what type of rock?
Why is plastic so efficient at collecting dew? Smooth?

Emily Brown
Posts: 61
Location: Maine
11
posted 7 years ago
I found this in this thread:

I recommend you check out the link at the bottom because it has more pics.

im sorry if i post a lot in maybe not the best places, im am still getting to know the forum.

we are using stone/rock a lot as season extender here. it isnt a greenhouse like structure, so maybe the wrong thread...

We ar in amsterdam, which is a temperate climate due to a mild sea breeze all year. so mild winters mild summers. but it can still freeze about -15 degrees Celcius, with snow and ice and stuff. the growing season is quite ok, but young sprouts sometimes die cos of late frost.

also we are in a city, and into urban PC. so we work with rock and discarded bricks buried in the soil. We have build a straw-berrie tower, i dont know why its called like that because all the ones ive seen got vegg and herbs in them but anyway.

it works a little bit like a herb spiral, but since its mostly stone surface it warms up early in the year, and we can keep harvesting from it a good 1,5 month longer than in our raised beds. almost everything gets bigger if it grows in the vegg. tower. tomatoes, kale, herb.

Morgan Morrigan
Posts: 1400
Location: Verde Valley, AZ.
posted 7 years ago
i was going to tell you to check out herb spirals too.

in low rain areas, rocks sequester rain better than organic mulch.
organic mulches suck up the water before it can soak into the soil, and re-evaporate it very easily.

bury lots of wood in your herb spirals too, it will allow fungi to move water around to whoever needs it.

and charcoal is good for fungi after a year
http://www.geocities.jp/yasizato/pioneer.htm

Get involved -Take away the standing of corporations MovetoAmmend.org

Carol Denton
Posts: 93
Location: Central Arkansas zone 7b
43
I like...

posted 9 months ago
This thread reminded me of the many mysteries of the Easter Islands, including how the native inhabitants dealt with survival in spite of deforestation. The piles of rocks everywhere were finally determined to be mulch beds for growing food. The Rapa Nui culture is such a good example of both sides of the coin, the devastation of their environment, and the ingenious ways they tried to fix it. The video clips below are very interesting!

posted 9 months ago
Anyone have planting suggestions for hugel beds around these rock jack gate posts I'm working on? I will be doing grapes over an arbor that I will build over the top, watering for the first year to establish them in new beds and then weaning them over a couple years to just roof runoff and deep mulch. I am looking for diversity around them that can handle the rocky/bedrock subsoil below the beds, which  unfortunately can't be too very high (18" or so) due to my dog being able to jump anything less than a 6ft fence, and that fence is largely to keep his unfixed wandering out of the road. This is right outside my door and as you can see near and above the pond for pumping water if irrigation or fish fertilizer is needed, so it can be fairly intensively managed and any runoff goes to the pond. I try to get as close to dry farming as I can, but this is a hotter climate than the coastal one I am used to and I am just starting over with a new place. We are in what I guess is zone 8 in the Siskiyou Mountains of NW California, at 1700ft, about 15 miles from the coast. Based on locals' input and my own experience I'd say annual lows are around 15-20f and record lows are probably above 0f. Annual highs are probably around 95-100f and record may be 105-110f. Winter has felt a lot like where I grew up in Seattle, but much sunnier. When it rains, it can really pour with us being close to the highest ridge-line this close to the Pacific, and we get an average of 80-100" according to neighbors and weather data estimates I have found. 90%+ of this rain comes from late September-April. The summers are reliably dry, and where I am much sunnier than just a few miles west. I don't know anywhere that would have an exact analogue for a climate, maybe the Basque Country, South Africa or New Zealand. Thanks for any input, and we have plenty more rocks to work with if you have ideas.
60894910478__9B6F7B59-2227-4637-9DFD-5DB06EDF64A8.jpg 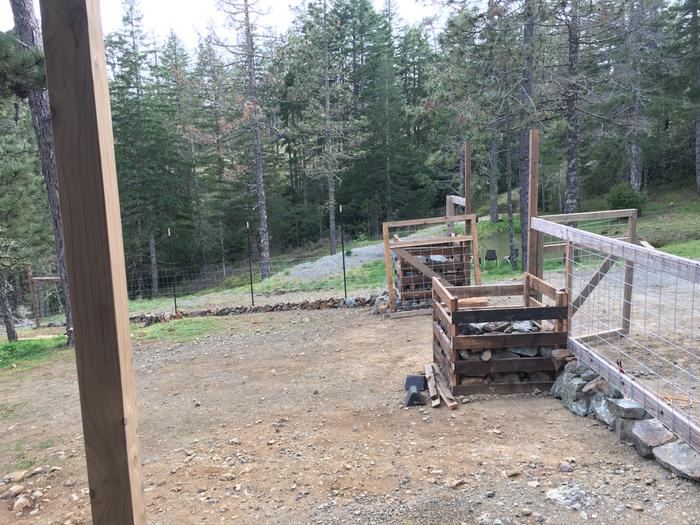 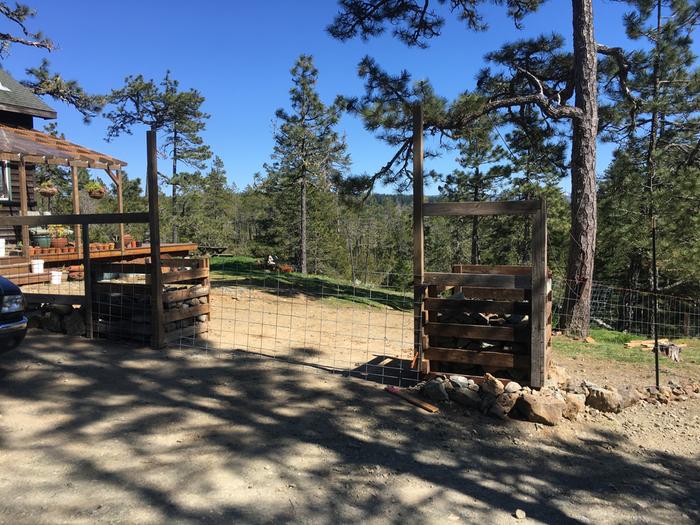 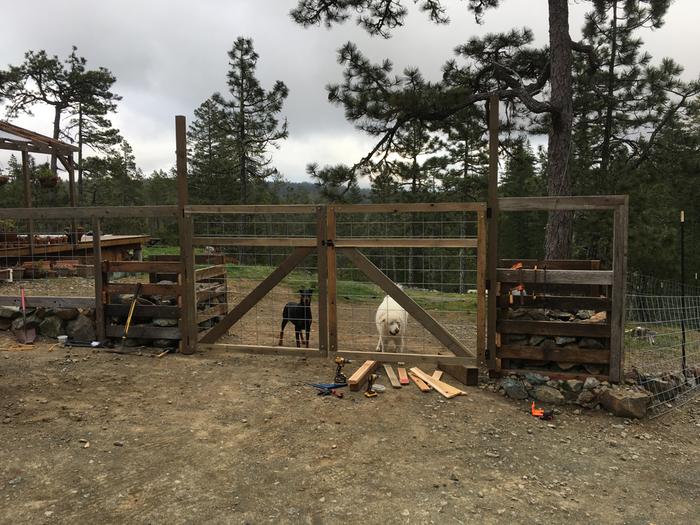 s. lowe
pollinator
Posts: 826
178
posted 9 months ago
Hey Ben, most of the culinary herbs do well with rocky soil in our inland mountains. Especially the perennials like Rosemary. And the big exposed rocks will pull dew most of the year that can help them get through the dry time.without irrigation