Posts: 5682
Location: Cache Valley, zone 4b, Irrigated, 9" rain in badlands.
2256
posted 1 week ago
I expect that the end result of my promiscuous tomato project will be fruits that taste like ground cherry, cape gooseberry, or tomatillos.

The promiscuous tomatoes are often high umami. We might be selecting as much for sweetness, and high umami, as we are selecting against acidity and bitterness.

I also select against lycopene in my watermelons.

I don't grow broccoli because it is so nasty bitter. That has a lot to do with the arid climate.

posted 1 week ago
Along with individual taste preferences I suspect that climate and soil play a very big role in how a tomato or anything else tastes. I've tasted a lot of nasty tomatoes over the years but don't think I ever encountered one I'd call bitter. Mostly the ones I don't like are because they don't taste like much at all, neither like a nice red tomato, nor like a delicious sweet fruit. Also a yucky texture is very off putting to me.

I have one tomato, I haven't grown for a couple of years that I dehybridized from  the bush variety of the F1, Early Girl. It tastes distinctly salty to me, especially in a dry season.

I didn't know watermelons had lycopene but I tend to like the yellow and orange ones better than red. I wonder if that is what makes the subtle difference because I don't dislike red ones, just like the others better.  Never encountered bitter broccoli either but it certainly doesn't all taste the same, some tastes a little bit sweet to me.

Richard Kastanie
pollinator
Posts: 151
Location: Missouri Ozarks
20
posted 1 week ago
Interesting discussion about lycopenes. I'm not a huge raw tomato fan in general unless they're in a salad with a good amount of dressing, mostly I like cooked tomatoes. I assume it's not the lycopene that I dislike, because I love autumn olive and goumi fruits which supposedly have the highest lycopene content of any known food. I'll literally gorge myself of fresh autumn olive fruit from the right bushes (they vary in flavor considerably) when they're at their peak ripeness (If they're too astringent, often they just need more time). Most other people aren't as enthusiastic about them. So I'm wondering, do those of you that don't like red tomatoes also not like autumn olive or goumi fruit?

Also, I know of one autumn olive bush that has yellow fruit instead of red. it's probably a mutation that has far less lycopene, as it's a fairly young bush that is in an area where all the rest have the normal red fruit. I think they taste different but equally good myself.
Garrett Schantz
Posts: 112
Location: PA, zone 6a
20
posted 1 week ago
Climate, soil - rainfall - all sorts of things can effect a tomatoes flavor. Genetics are probably the largest factor.

Genetics also play a role in how things taste to different people.

I generally dislike tomatoes in general. I could use them on a burger, sauce - things that pretty much eliminate the tomatoes flavor.

I dislike red watermelons as well - I can eat a few pieces due to the other nice flavors.  Only recently found the lycopene connection.

I would call lycopene astringent / bitter. I also dislike acidity, which most tomatoes have to some degree.

I should probably mention that I hate bitter foods.

Joseph has been selecting towards tomatoes that I can eat without feeling disgusted, which is nice.


I tried making a list of some tastes I have that are probably genetically influenced. Along with what they should taste like.

Cilantro: To me it tastes like stink bugs, maybe soapy.  It should taste lemony due to the citronella. Some people like me, have receptors which can detect aldehyde chemicals - other things. The chemicals are found in both stink bugs and cilantro. The flavor probably masks the citronella.

Arugula: Young leaves, mature leaves - store bought leaves. They all just taste bitter to me, no added peppercorn taste that a lot of people can detect. Should be peppery / spicy, bitter.

Limes:  I can detect a single drop of it in lemonade, ruins the whole drink for me. I also hate things made with Hops. So, yeah. Nothing bitter.

Onions: I like the initial taste of onions, after a few minutes I get a metallic - smoky aftertaste in my mouth. I can handle a little bit if the onions are mixed with a burger or something in small amounts. Garlic is great, no issues with it. My father has the same issue with onions. I haven't died or gotten sick, doesn't seem to be an allergy or intolerance.

Some people also think that Ginger is bitter.

It would be fun to test out how different people react to Zanthoxylum species, Tasmannia lanceolata. Or even Synsepalum dulcificum which contains miraculin, the chemical activates sweet receptors, sour and sometimes bitter things are perceived as sweet. Apparently transgenic tomatoes that contain Miraculin are being produced in labs.

Some orange tomatoes have the astringent tomato taste, some have very little of it. I should be able to screen out the bad tasting ones myself.

posted 1 week ago
I have a couple flowers growing on BH-series plants obtained from EFN that look like this: 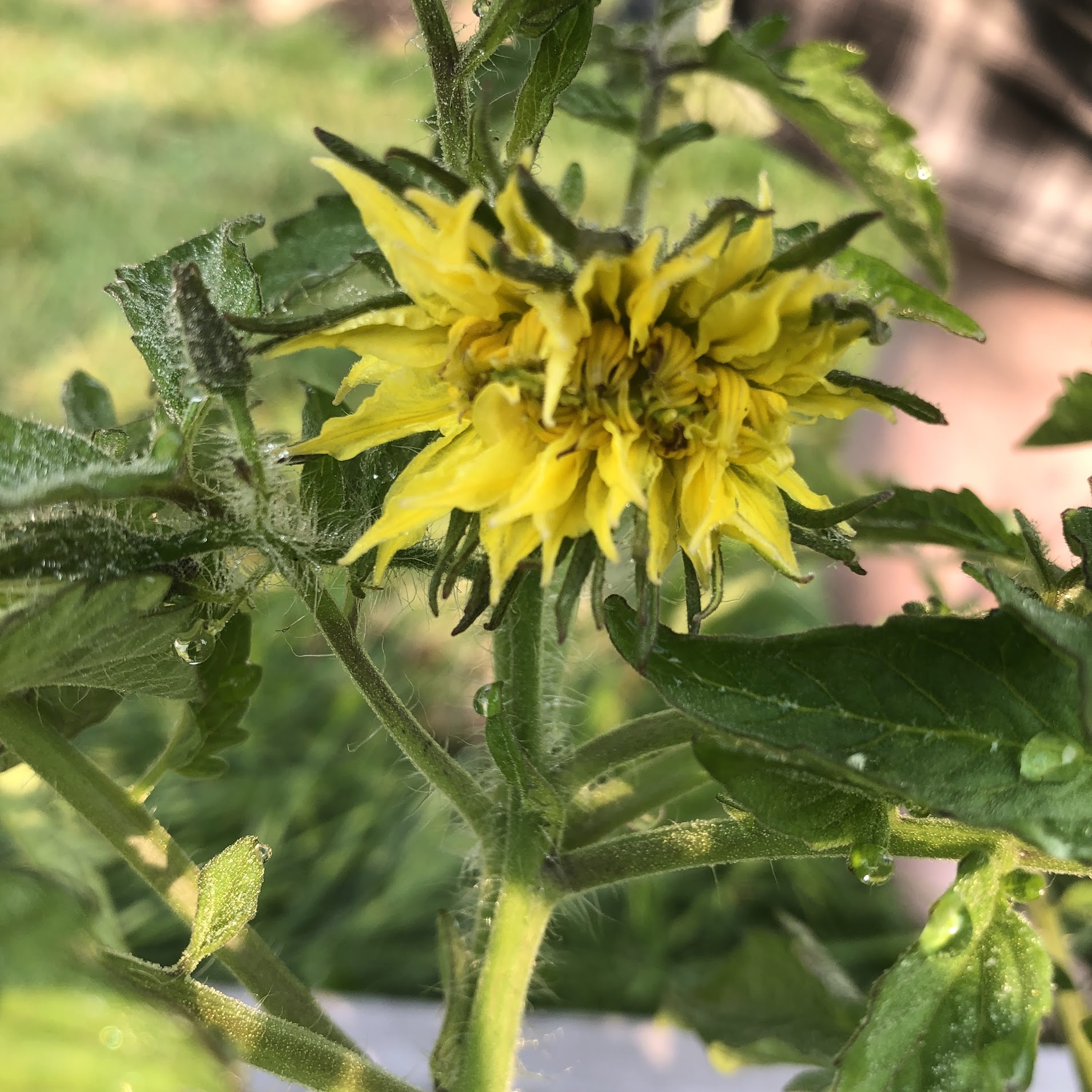 It looks like a compound flower or something. Is that normal or desirable?

For a couple other images of it, go here.
Steve Mendez
Posts: 111
27
posted 1 week ago
One of my Early Girl tomato plants has a flower that looks similar to yours. There was a small wasp/bee on the flower that flew away right before the picture was taken. It will be interesting to see what the fruit from this flower looks like.
Large-Tomato-Flower.jpg 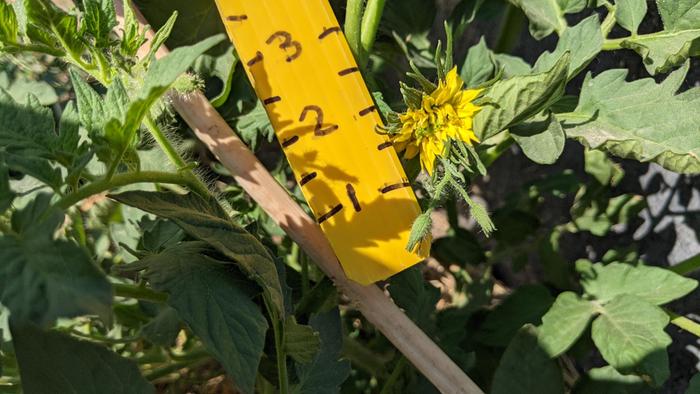 Posts: 5682
Location: Cache Valley, zone 4b, Irrigated, 9" rain in badlands.
2256
posted 1 week ago
That is typical for the BH-series. Those mega-flowers lead to mega-fruits. It's typically only the primary flower in early clusters that acts that way. The mega fruits might have cat-facing due to complex nature of the flower. Some people leave them. Other people remove them. Personal preference.

Ansis Klavins
Posts: 21
8
posted 5 days ago
I think I've got the 'sea urchin' 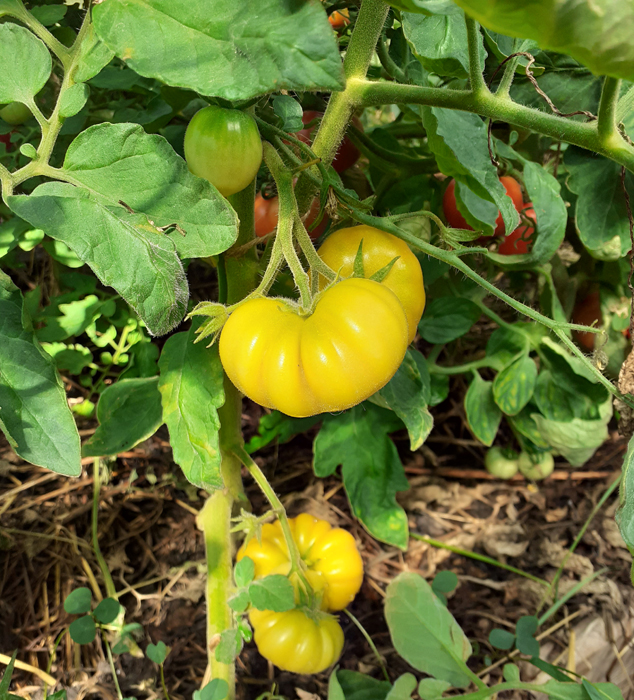 It's the velvety looking plant from my previous posts. Fruits are on the small side of medium, greenish yellow in color and have a very unique taste, nothing like I've had before (I have not had an actual sea urchin though).

The flavor works very well with a bit of salt added.
I wonder how it would work in a sauce.
Garrett Schantz
Posts: 112
Location: PA, zone 6a
20
posted 4 days ago
My velvet leaved Wildling has some weird flowers. Added a front view / back view.

Assuming that the "fish - sea urchin" tastes are from S. pennellii - or a mix of chemicals from S. habrochaites - domestics mixed with S. pennellii.

The flowers on my plant are quite small - but also quite messy. Any bees that visit these flowers will probably pollinate them with another wildling - BH - Q series, or a habrochaites may donate some pollen.

Probably going to be getting cherry or currant sized fruits from this plant.

Wonder if this will be a "sea urchin" flavored plant as well...?

Maybe it would go well mixed with Oyster Leaf (Mertensia maritima). Could also go well with Salsola komarovii / Salsola soda - Mesembryanthemum crystallinum, plants that taste like salt (They take salt up from the soil and store it in their leaves).

All of these new flavors will probably need new recipes as well. A lot of these may not work in standard tomato canning recipes - should be easy to create new recipes along with new uses - fruity tomatoes could work as a paste or "jam". A fruity tomato doesn't sound too good on burgers either - guess I will try it anyways if I get anything fruity.

Quite excited for fruits to form.

Assuming that the "fish - sea urchin" tastes are from S. pennellii - or a mix of chemicals from S. habrochaites - domestics mixed with S. pennellii.


Makes sense, because that yellow "sea urchin" one posted above looks identical to the one I thought tasted fishy.