Shelly Randall
Posts: 73
Location: Central Valley California
10
posted 9 years ago
Has anyone done a comfry salve from infused olive oil and beeswax? Do you have to use a wet poultice for it to work, or can a salve do the trick.
tel jetson
steward

Posts: 3691
Location: woodland, washington
180
posted 9 years ago
I've made a comfrey salve. didn't use it much, but it seemed helpful.

Patrick Mann
Posts: 310
Location: Seattle, WA, USA
6
posted 9 years ago
I make and use comfrey beeswax salve. It's definitely a good moisturizer. I can't say whether the comfrey is specifically enhancing the efficacy. But the nice green color at least has some placebo effect 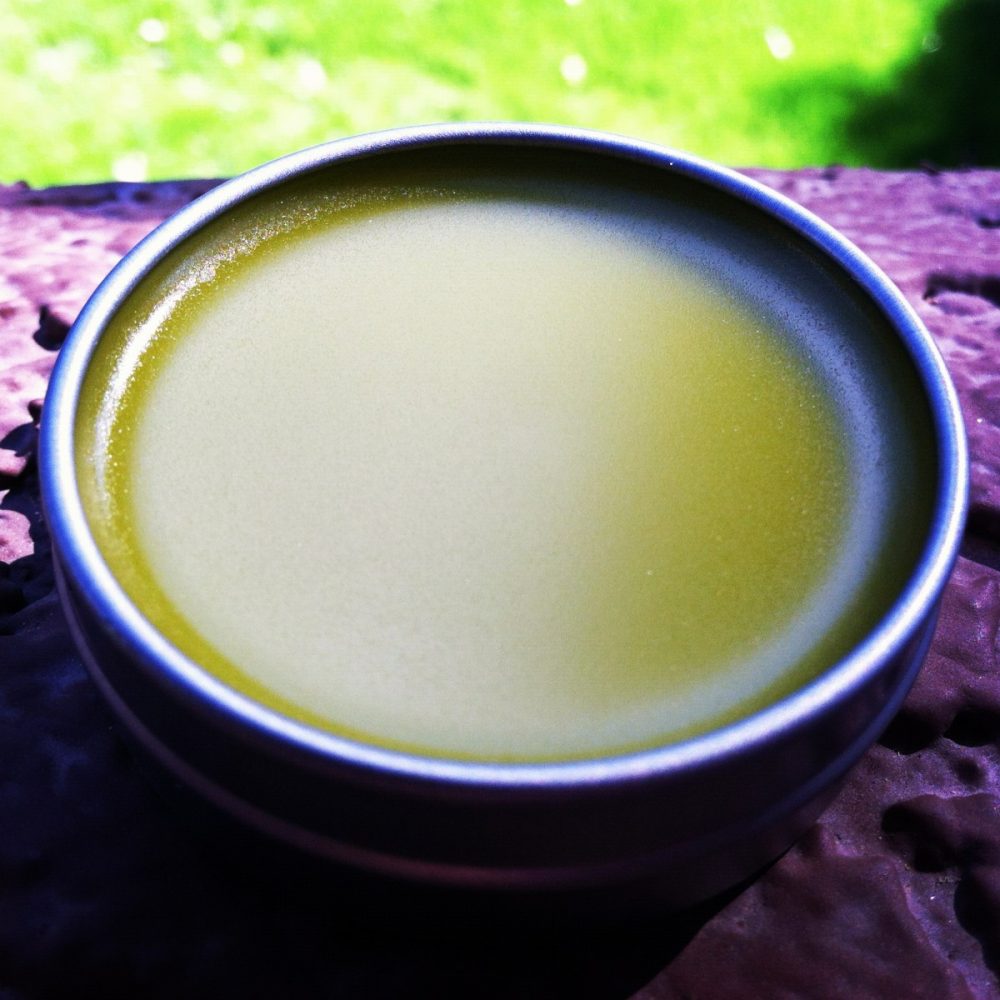 Shelly Randall
Posts: 73
Location: Central Valley California
10
posted 9 years ago
Thanks for the quick responses. And Thank You for the link, Amedean. There was lots of useful information there. I guess what I'm trying to get at with my question is that comfry is for "knitting bones" and a salve is applied to the skin. Can it penetrate into the blood stream? I've always been amazed at the qualities of this plant and have always wondered how it works. I guess trying it is the best way to find out, but I was wondering if anyone had some experience with salve for bruises, wounds, etc.
Jay Vinekeeper
Posts: 79
Location: Northwest Lower MI
3
posted 9 years ago

This is a great picture. Have produced an identical salve from bees wax, comfrey infused in olive oil and a few drops of either lemon grass or peppermint oil for scent.

Started using this and giving it to friends and family perhaps two years ago. My wife puts it on her chapped lips every night, and we put it on everything from burns and cuts to age spots. It has been proven highly effective to us.

It leaves the skin feeling especially nice and seems to strengthen and improve the elasticity of skin. Wonderful for back and foot massage.

Highly, highly recommended. The salve alone is effective and no additional fresh poultice is needed.

Easy to make. I fine chop fresh comfrey and then infuse it for at least two weeks in olive oil. Melt wax in a small saucepan of water and add infused oil slowly until one achieve the desired consistency. I think it turns out to be 2-3 parts infused oil to one part bees wax ... or so.

posted 1 year ago
So, a couple weeks ago while cutting brush in my orchard (or possibly while digging wild onions) I somehow got a bunch of poison ivy on my left arm.  A variety of minor eruptions up and down the arm but about four solid square inches in one patch of nasty, sticky, oozing, weepy blisters.

I have some cream (topical antihistamine plus calamine) that helps (a little) drying up the worst of a wet sticky poison ivy rash.  But then it usually scabs up and typically takes a really long time to heal, with angry red itchy scabs that can't heal readily because there's still some residual rash.

When I got to that stage this year, I remembered hearing a podcast (probably Spirko, before his podcast wandered off into notions on current affairs that make me angry) about making comfrey salve.  I already knew comfrey is powerful medicine for rashes and skin wounds; my mother used a strong comfrey tea to soothe and heal my intolerable chicken poxes when I was a small kid. So I did some Googling and decided to make up a salve real quick and see how it would work.

Started with a bunch of super-fresh comfrey: 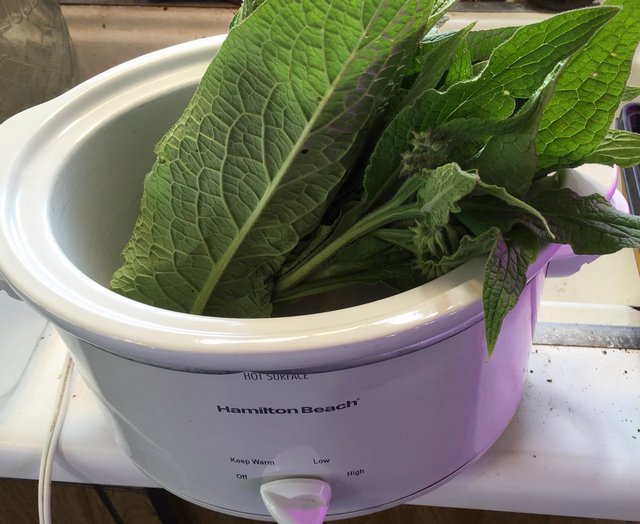 Added a few sprigs of rosemary for smell and preservation, would have used about three times as much but this is all I had on the one small rosemary houseplant I babied through the winter.  Plus about an ounce of commercial dried chamomile for extra soothing action: 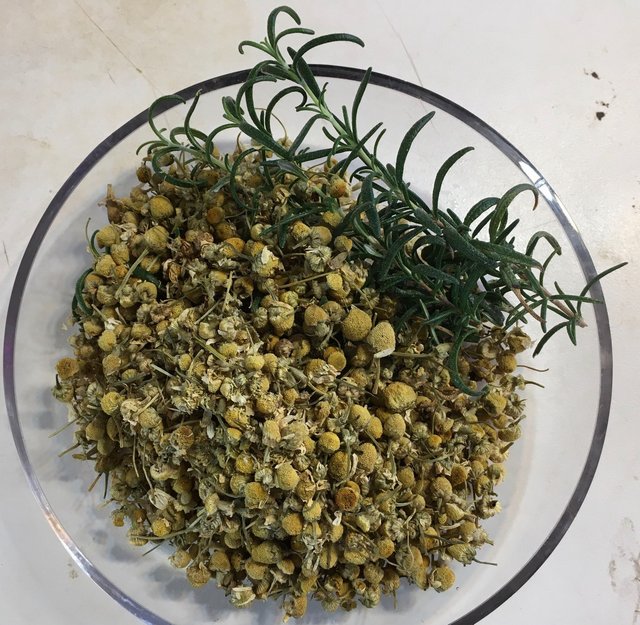 Chopped the comfrey (actually held the bundle and scissored it straight into the crock with kitchen shears), threw in the other herbs, and added (possibly right after this picture, not sure) a pint of olive oil: 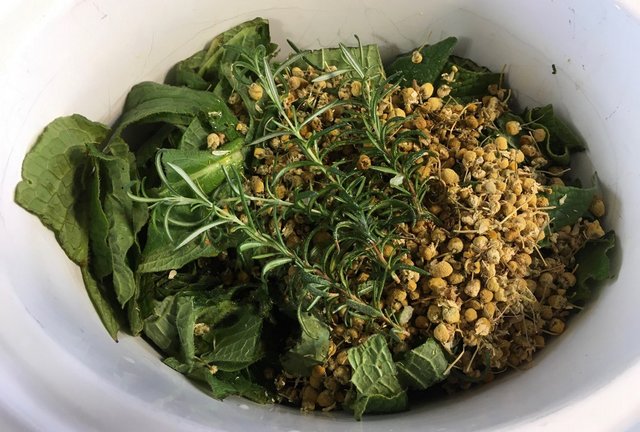 Because the chopped wet/fresh comfrey was mostly still out of the oil, I ran the crock pot on high temp until it wilted the comfrey down in volume, then I turned it to "keep warm", put a vented lid on the crock, and left it for 24 hours.  Then I strained out all the solids: 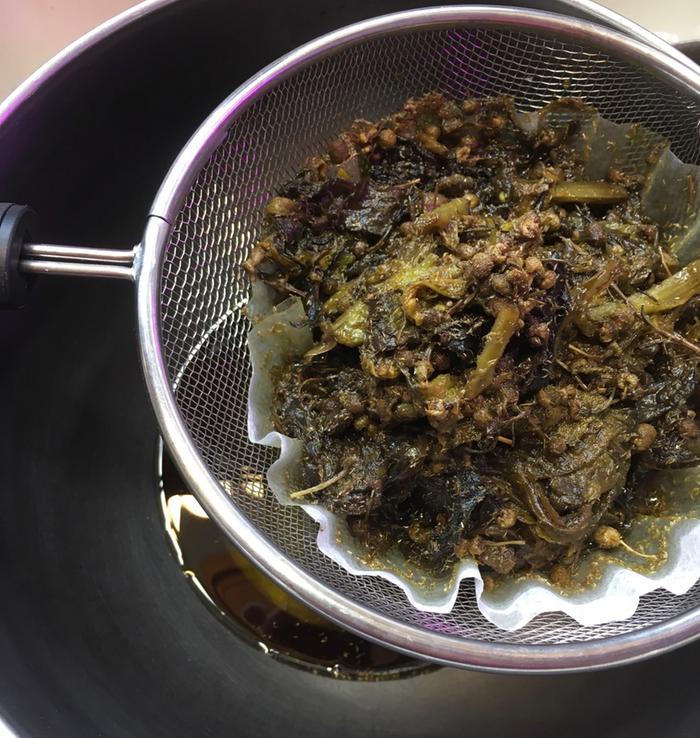 I put the infused oil back in the crock and added two ounces of beeswax.  Next time I will use just one ounce; the final texture is harder than a salve needs to be. 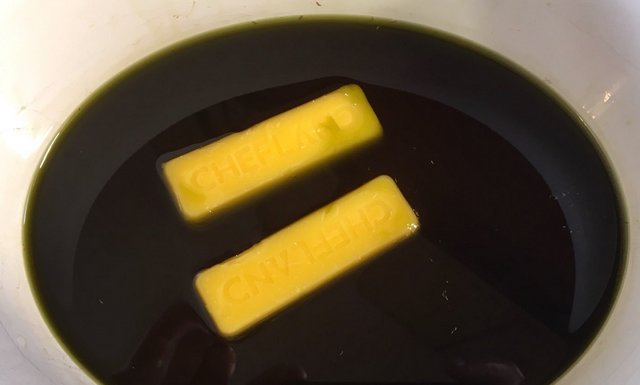 Once the wax melted down (about half an hour with the crockpot on keep warm, if I recall) I poured the final product through a plastic funnel into four jars.  They are, I think, a one-cup jelly jar, a four ounce pimento jar, a two ounce pimento jar, and a perhaps one ounce tiny jar that jam came in with room service in a fancy hotel.  By my math that means I left 1-3 ounces of oil in the discarded vegetable matter, which is about right; it was oily and I didn't take any steps to press it beyond mashing it with a big spoon. 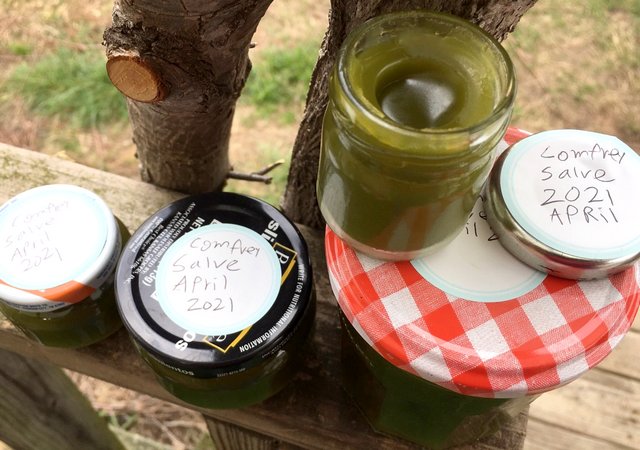 I put some on my rashed-up scabbed-up arm as soon as it cooled enough to solidify.  By my estimation I would normally have expected to wait a week before that area healed up enough to let go of the scabs.  That was two days ago, plus a few hours.  I'll spare you the gross wound photos (the arm still looks like hell) but the healing has been dramatically faster than expected.  Virtually all the scabbing has dropped and the new skin underneath is pink and healthy, though still very tender -- not the angry red that I would normally expect.  I still have a bunch of outlying red bumps that were late-arriving blisters and the healing has a long way to go, but I am convinced; the comfrey salve is radically speeding the healing process over what I have come to expect from getting poison ivy rash pretty much every year.  I pronounce myself a fan of the stuff.

I do believe that if I had been in less of a hurry, about three days on keep warm would have been better than one day plus a couple hours at higher heat.  But that's something to try for next time.

I should note that we have a SKIP/PEP badge bit for making comfrey salve, if anybody is inclined to do that style of documentation when they try this.  I have avoided the gamified skills-learning-and-documentation thing that people are having so much fun with for a few reasons, but in this case it's really simple: I don't feel like keeping an herbalism journal like an apprentice hedge witch. I'm not disparaging hedge witches, some of my best friends et cetera. It just doesn't feel right for my style of learning, documenting, and remembering.  I'm a set-in-my-ways curmudgeon, me.

posted 1 year ago
This stuff continues to amaze.  Woke up this morning and reached over without thinking to scratch the itchy area and by the time my eyes were open a few seconds later, all the remaining scabs had dropped into a neat little pile on my sheet.  At the end of the day now the tender new skin I mentioned yesterday is almost to normal skin color (though still somewhat tender) and all the angry red outlying bumps have diminished and are now hard to see because their color is trending back toward normal.  I know how long it takes this kind of rash damage to heal on me and this is twice or three times faster than normal.