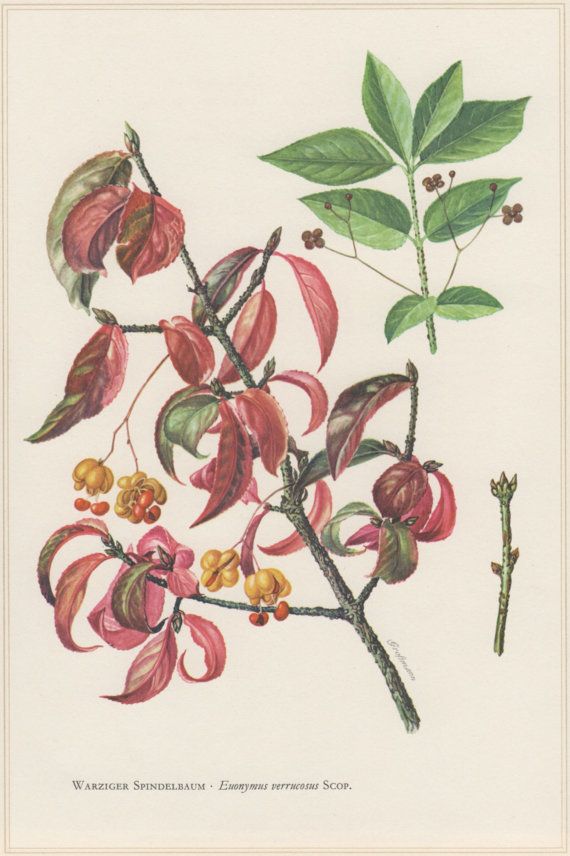 Of this species, we only have one, as well. However, a couple of shrubs are called “Burning Bush”, as well, so it can be confusing, so I find it best to use the common name of Wahoo for this one…Euonymus… besides, it is a fun name!

This tree goes by many names. The English variety is called “Spindle Tree”. Mrs. Grieve attempts to unravel the mystery of the names in her comprehensive, A Modern Herbal, written in the 1930’s:

The Latin name for Spindle is Fusus, and by some of the old writers this plant is called Fusanum and the Fusoria. By the Italians it is still called Fusano. The fruit is given three or four as a dose, as a purgative in rural districts; and the decoction, adding some vinegar, is used as a lotion for mange in horses and cattle. In allusion to the actively irritating properties of the shrub, its name Euonymus is associated with that of Euonyme, the mother of the Furies. In old herbals it is called Skewerwood or prickwood (the latter from its employment as toothpicks), and gatter, gatten, or gadrose. Chaucer, in one of his poems, calls it gaitre.

Gatter is from the Anglo-Saxon words, gad (a goad) and treow (a tree); gatten is made up of gad again and tan (a twig); and gadrise is from gad and hris (a rod).'

The same hardness that fitted it for skewers, spindles, etc., made it useful for the ox-goad.

'I coulde never learne an Englishe name for it. The Duche men call it in Netherlande, spilboome, that is, spindel-tree, because they use to make spindels of it in that country, and me thynke it may be as well named in English seying we have no other name. . . . I know no goode propertie that this tree hath, saving only it is good to make spindels and brid of cages (bird-cages).

The variety of Spindle Tree (Euonymus atropurpureus), common in the eastern United States, is known there as Wahoo, Burning Bush, or Indian Arrowwood. This is the kind generally used in medicine.

In small doses, Euonymin stimulates the appetite and the flow of the gastric juice. In larger doses, it is irritant to the intestine and is cathartic. It has slight diuretic and expectorant effects, but its only use is as a purgative in cases of constipation in which the liver is disordered, and for which it is particularly efficacious. It is specially valuable in liver disorders which follow or accompany fever. It is mildly aperient and causes no nausea, at the same time stimulating the liver somewhat freely, and promoting a free flow of bile.

To make the decoction, add an ounce to a pint of water and boil together slowly. A small wineglassful to be given, when cold, for a dose, two or three times a day.

Of the tincture made with spirit from the bark, 5 to 10 drops may be taken in water or on sugar.

Euonymin is generally given in pill form and in combination with other tonics, laxatives, etc.

Resources of the Southern Fields and Forests states:

DeCand. says an acrid principle has been detected among the species.

Griffith’s Med. Bot. 220. Emetic, discutient and anti-syphilitic. It is also thought to be narcotic. The seeds are said to be nauseous, purgative and emetic, and are used in some places to destroy vermin in the hair. The leaves are poisonous to cattle.

WAHOO, (Euonymus atropurpureus.) Possesses properties similar to the above. Dr. Wood, in the 12th Ed. Of the U. S. Disp., slates that Mr. G. W. Carpenter had introduced a bark some twenty years since as a remedy for dropsy, under the name Wahoo, he having obtained a knowledge of its virtues in the Western States. Dr. W. ascertained that it was derived from this plant, which must be distinguished from the Elm of the Southern States, which is also called Wahoo. The bark imparts its virtues to water and alcohol. By analysis of Mr. W. T. Wenzel, it was found to contain a bitter principle, which he named euonymin, asparagin, resin, fixed oil, wax, starch, albumen, glucose, pectin and salts. (Am. J. Ph., Sept., 1862.) Mr. W. P. Clothier found the substance, which is the euonymine of the Eclectics, to purge actively without griping. Dr. Twyman, of Mo., informed Dr. Wood that he had found the bark, as a cathartic, rather to resemble rhubarb than to possess hydragogue properties, and he thought that he had obtained from it good results as an alterative to the hepatic functions. The decoction or infusion is used in dropsy, made in the proportion of an ounce to a pint of water, and given in the dose of a wineglassful several times a day. TJ. S. Disp. See a paper by C A. Santos, upon the Am. Species; Am. J. Pharm. Xx, 80

Action, Medical Uses, and Dosage.—Euonymus has been in use among physicians for a long time. The bark is tonic, laxative, alterative, diuretic, and expectorant; the seeds are cathartic and emetic. In infusion, syrup, or extract, it has been successfully used in intermittents, dyspepsia, torpid liver, constipation, dropsy, and pulmonary affections. Prof. Locke states” there are but few good stomach tonics, and this agent is one of them.” It stimulates the biliary flow, and has considerable anti-malarial influence, and may be used in intermittents after the chill has been broken with quinine. It stimulates the nutritive processes and improves the appetite. It may be used with advantage in atonic dyspepsia, and in indigestion due to hepatic topor or following malarial fevers. It is a remedy for chronic ague, and the consequent obstinate constipation and gastric debility accompanying or following it. A gin tincture (root ℥j to gin fl℥viij), is not without value in some cases of dropsy, particularly when associated with hepatic and renal inactivity. Dose of the tincture (℥viij to alcohol 76 per cent Oj), from 1 to 4 fluid drachms; of the syrup, from 1 to 2 fluid ounces; of the hydro-alcoholic extract, from 5 to 15 grains; of the powder, from 20 to 30 grains; of specific euonymus, 1 to 30 drops.

Specific Indications and Uses.—Prostration with irritation of the nerve centers; periodical diseases, to supplement the action of quinine; anorexia, indigestion, and constipation, due to hepatic torpor.

Plants for a future gives the following uses for out native Wahoo:

Wahoo was used in various ways by the North American Indians, for example as an eye lotion, as a poultice for facial sores and for gynaecological conditions. In current herbalism it is considered to be a gallbladder remedy with laxative and diuretic properties. The bark, however, is toxic and should only be used under professional supervision, it should not be given to pregnant women or nursing mothers. The stem and root bark is alterative, cardiac, cathartic, cholagogue, diuretic, expectorant, hepatic, laxative, stimulant and tonic. The root bark is the part normally used, though bark from the stems is sometimes employed as a substitute. In small doses it stimulates the appetite, in larger doses it irritates the intestines. The bark is especially useful in the treatment of biliousness and liver disorders which follow or accompany fevers and for treating various skin disorders such as eczema which could arise from poor liver and gallbladder function. It is also used as a tea in the treatment of malaria, liver congestion, constipation etc. The powdered bark, applied to the scalp, was believed to eliminate dandruff. The bark and the root contain digitoxin and have a digitalis-like effect on the heart. They have been used in the treatment of heart conditions. The bark, which has a sweetish taste, is gathered in the autumn and can be dried for later use. A tea made from the roots is used in cases of uterine prolapse, vomiting of blood, painful urination and stomach-aches. The seed is emetic

The Physician's  desk reference for herbal medicine tells us:

The drug is reported to be a laxative and choleretic. Larger doses have an effect on the heart. Unproven uses: in the past, the drug was used as a cholagogue, laxative, diuretic and tonic, and for dyspepsia. Today it is used in homeopathy. Precautions and adverse reactions: poisoning caused by the berries have been recorded. A fatal dose is said to be 36 berries …. Wahoo root bark and fruit are not recommended for use, as the drug is considered too dangerous.


This article is an excerpt from The Medicinal Trees of the American South, An Herbalist's Guide: by Judson Carroll

His New book is:


Medicinal Shrubs and Woody Vines of The American Southeast An Herbalist's Guide
Read About Growing Your Survival Herb Garden for Preppers, Homesteaders and Everyone Else: https://southernappalachianherbs.blogspot.com/2022/06/medicinal-shrubs-and-woody-vines-of.html

Available for purchase on Amazon: https://www.amazon.com/dp/B0B2T4Y5L6

His other works include:

Growing Your Survival Herb Garden for Preppers, Homesteaders and Everyone Else

Read About Growing Your Survival Herb Garden for Preppers, Homesteaders and Everyone Else: http://southernappalachianherbs.blogspot.com/2022/04/growing-your-survival-herb-garden-for.html

Available for purchase on Amazon: https://www.amazon.com/dp/B09X4LYV9R

The Encyclopedia of Bitter Medicinal Herbs:

Available for purchase on Amazon:

Available for purchase on Amazon: www.amazon.com/dp/B09P7RNCTB

Look Up: The Medicinal Trees of the American South, An Herbalist's Guide

The Herbs and Weeds of Fr. Johannes Künzle:

His weekly articles may be read at judsoncarroll.com

His weekly podcast may be heard at: www.spreaker.com/show/southern-appalachian-herbs

The information on this site is not intended to diagnose or treat any disease or condition. Nothing on this site has been evaluated or approved by the FDA. I am not a doctor. The US government does not recognize the practice of herbal medicine and their is no governing body regulating herbalists. Therefore, I'm just a guy who studies herbs. I am not offering any advice. I won't even claim that anything I write is accurate or true! I can tell you what herbs have "traditionally been used for." I can tell you my own experience and if I believe an herb helped me. I cannot, nor would I tell you to do the same. If you use any herb I, or anyone else, mentions you are treating yourself. You take full responsibility for your health. Humans are individuals and no two are identical. What works for me may not work for you. You may have an allergy, sensitivity or underlying condition that no one else shares and you don't even know about. Be careful with your health. By continuing to read my blog you agree to be responsible for yourself, do your own research, make your own choices and not to blame me for anything, ever.

"Them that don't know him don't like him and them that do sometimes don't know how to take him, he ain't wrong he's just different and his pride won't let him do the things to make you think he's right" - Ed Bruce (via Waylon and WIllie)