How much asparagus to plant? What yields to expect?

posted 2 months ago
This year I’d like to plant some asparagus crowns. I’d like to have enough planted to be able to go out there in asparagus season and harvest 1 or 2 pounds at a time (or more), enough for a big family side dish. I like to feel like there is an abundance of food and to just harvest it and tell the kids they can eat up as much raw as they like, but asparagus crowns cost money, and there’s lots of other things I can be growing, so I don’t want to go too far overboard.

I could always feed the excess to the goats if we get too much, I just have no idea how much to plant!

How much yield would you get per week for 10 plants?

How many asparagus crowns would you plant, if trying to grow food for 8 people that love vegetables?

And another asparagus question… Some places say not to harvest any at all the first year it’s planted - is this just for seed-grown asparagus, or is it for crowns as well? What actually happens if you harvest some in the first year?

posted 2 months ago
I grew some Mary Washington from seed around 5 years ago. I think you need more than 10 crowns.

I'm working my way up to 50 plants, so that there's 10 plants per person in the ground. Each plant usually puts up one spear at a time, so with us, with around 30 plants, we'll go out and maybe 6 spears are ready... then we put them in water in the fridge and a few days later 10 more, and then with around 3 pickings we have enough for a good meal. With 10, I feel like your max spears at a time would be quite low. Maybe as mine grow they'll put up more than one spear at once...But the spears are pretty big and the root balls are massive, and i still think we need more to feel abundance!

posted 2 months ago
I have planted 30 crowns this year and I'm hopeful that it will provide a good side for the two of us, each time we harvest. I planted an older variety - Connivers Colossal - which apparently produces considerably less than some of the modern varieties.

A bed with 30 crowns occupies quite a bit of space. This isn't a problem for us but it may be something you want to consider.

On the crowns versus seed debate, crowns will have a head start and allow you to skip a year or so. I've heard that you still shouldn't harvest in year one or year two, however, as you are trying to allow the crowns to grow and expand. Take a light harvest in the third year and then go for it after that! I have also heard that picking the spears in the centre of the bed and letting those are the edge grow up is a good way to encourage the asparagus crowns to spread outwards and become more productive.

My experience is that, in the first year, the crowns have produced very small spears that do not look very appetising. Much better to let the plants establish and be patient.

Since you are wanting food fairly quickly, I recommend planting root crowns.  Some sellers sell older root crowns that can theoretically be picked the first year, though I would want to wait at least a year to let them get established.

On another point, asparagus is a pretty hungry plant and your yield will depend heavily upon the fertility of your soil.  In particular, asparagus likes nitrogen.  This means that you will want to do something to get extra nitrogen to your plants.  This could be accomplished by adding in an organic fertilizer like blood meal or compost/ comfrey tea; adding some type of cover crop; or my personal favorite—add in biology to work synergistically with your asparagus.

Jo Hunter wrote:I'm working my way up to 50 plants, so that there's 10 plants per person in the ground. Each plant usually puts up one spear at a time, so with us, with around 30 plants, we'll go out and maybe 6 spears are ready... then we put them in water in the fridge and a few days later 10 more, and then with around 3 pickings we have enough for a good meal.

We have 24 3-year old crowns and get enough for the two of us to have several meals in late spring. I collect several spears a day and put them in a jar with some water until I have enough for a meal. I don't pick anything smaller than pencil sized diameter and at a certain point, I stop harvesting and let them get on with growing and strengthening their root systems.

I agree with Jo that you will need a lot more than 10 crowns for a big family. But they sure do take up a lot of space. The nice part is that they are low maintenance for me.
Trace Oswald
master pollinator
Posts: 3186
Location: 4b
1050
I like...

posted 2 months ago
As others have said, I think you will need quite a few plants to feed that many people.  I look at it as a long term investment.  Whatever you spend on the plants, you will be harvesting food from them for literally decades.  That is a very hard investment to beat.

I'm hoping to get to at least 40 plants for the two of us.

posted 2 months ago
If money rather than time is your limiting factor, then many varieties of Asparagus grows fairly easily from seed: I have Connovers Colossus and Argentuil Early, Mary Washington is another commonly available variety. They will take an extra year or so to get to cropping size, but you could start them in a nursery bed and transfer the better plants in the second year.
There have been a few threads on companion planting with Asparagus - this way the space they take up can be stacked with other crops. The consensus is that this doesn't necessarily affect the yield if the plants are well fed. Here is the most recent thread discussing this: https://permies.com/t/185149/Companion-planting-Asparagus

posted 2 months ago
This is my asparagus after ~4 months of growing. It is quite small at the moment and struggled early on due to slug pressure. My point is even crowns grown in rich soil/compost will take a long time to get established.
progress.jpg 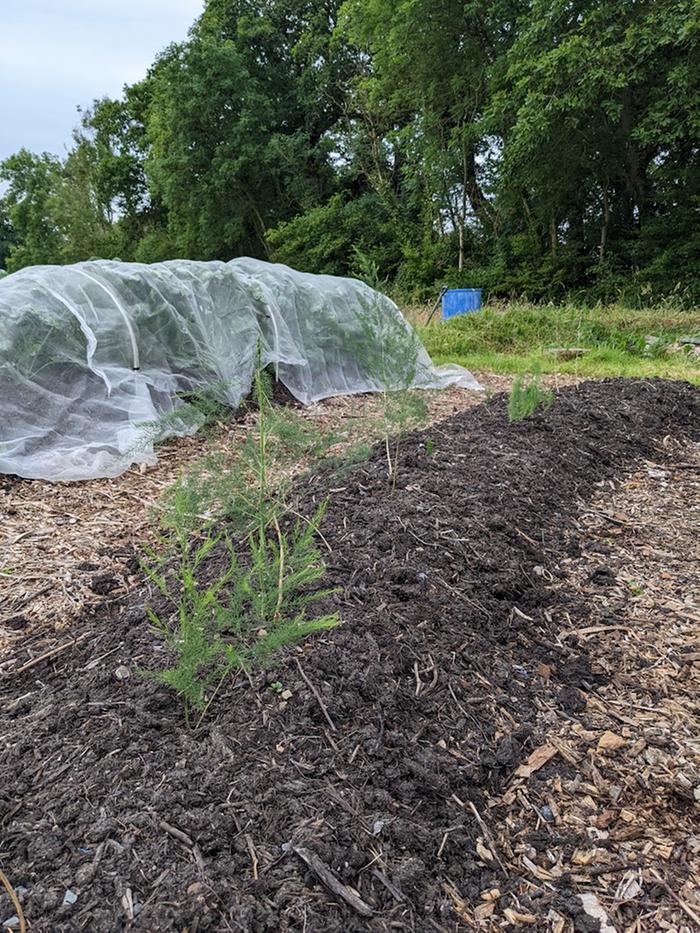 posted 2 months ago
Seeds vs crowns: I didn't have the option of crowns here in India, so I started asparagus from seeds. I found that I was getting a modest harvest on year 3 and a good bit on year 4, of super fat spears that were very tender and yummy. I expect bigger yields on year 5. My understanding is that if you plant crowns you still shouldn't harvest in year 1 or 2, so crowns don't seem to actually give you a major head start over seeds (I've read this too).

Yield: Asparagus has a low yield of weight of vegetable for its area, but if you mulch deeply then it's very little work once they get established. In my climate I have to irrigate, but if your climate has normal rain you won't even have to do that except during a drought. I irrigate with a hose at ground level onto the mulch. I fertilise occasionally with some liquid gold in the irrigation water tank, haha, but I don't add any other compost because I don't want to disturb the deep mulch. Upshot: It's excellent yield to work ratio but poor yield to area ratio. So it depends on your resources. I've seen listed that you should calculate 20 plants per asparagus-loving adult in the house.

Male::Female: I got "Jersey Knight" seeds from the US that are supposed to be 75 - 90 % male, but I find at least half the plants are female. These produce prodigious numbers of berries, which is a bit of a problem, because they produce lots of tiny seedlings the next year if I don't remove the berries before they ripen. The tiny seedlings are weeds, almost the only weeds able to come up in the deeply mulched asparagus beds, and they are said to cause crowding and reduction of yield. But I think maybe the female plants are the ones giving surprisingly fat spears. If crowns give you much fewer females that would be a major benefit.

Beds & Companions: My asparagus beds are 4 feet (1.3 m) wide, with two rows of asparagus plants about 2 feet (60 cm) apart down the length of the bed, spaced about 12 to 18 inches in their rows. In one bed I planted daffodils down the middle, which works nicely because they bloom at the same time as the asparagus harvest, and do their annual photosynthesising while the spears are small or being harvested. When the spears are allowed to grow up into ferns and shade the daffs, then the daff leaves are already turning yellow. I don't know if this is a good long term companion as the 'gus roots get bigger, though. In the other three 'gus beds, I've allowed super early leafy greens and flowers to reseed around the edges, and that also works well for me. In my case it's mostly lettuce, rocket, red orach, and a little cilantro and red mustard, all of which prefer full sun in the early spring when the 'gus is just spears, and once it's ferned up, the leafies are finished and can be easily pulled or left to reseed. Parsley isn't a good choice because it survives the winter, bolts the second year, and its deep taproot can't be pulled out without damaging the asparagus.