Fukuoka's Farm - can I visit it, or one like it?

I just started reading up on Masanobu Fukuoka. Seems really interesting. I am living in Tokyo now and I was wondering if there is anyone still in Japan keeping up his farm or if there is another farm I might be able to visit and possibly work at or learn from that you may know of.

ありがとうございます。
larry korn
Author
Posts: 118
Location: Ashland, Oregon
27
posted 9 years ago
Hey Joel. Fukuoka-san's farm is now being run by his oldest son, Masato. He is an organic farmer and is not as interested in teaching as his father was. He is quite busy just taking care of all the things he needs to do, so Masato has asked that people please not come to the farm to visit. I'm sure you understand.

posted 9 years ago
Larry, do you know of any other farm which has emulated Fukuoka's philosophy and techniques and which also welcomes tours?

larry korn
Author
Posts: 118
Location: Ashland, Oregon
27
posted 9 years ago
Hey Tyler. I wish I could suggest a place where someone had a natural farming set up and welcomed visitors. The people I know who are practicing nf seem to prefer a low profile. I have visited a number of farms that are clearly moving in the direction of nf but will take a little while to get there. Most of these start out as a permaculture or permaculture/biodynamic project. Then the farmer gets the idea to ease up a bit, give up some control and just let things happen a bit more on their own. This is a reflection of what is going on in the farmer's head. You know that feeling where you walk into someone's house for the first time and you feel like you already know them by how they have decorated, the colors they used, what they have hanging on the walls, and the books in their bookshelf? I kind of feel that way when I get to do a farm tour with someone. One place to visit would be the Bullock Brothers farm on Orcas Island in Washington. It's certainly the best combination permaculture/natural farming site I know of, at least here in the Pacific Northwest.

posted 9 years ago
Thanks!

Tyler Ludens wrote:Larry, do you know of any other farm which has emulated Fukuoka's philosophy and techniques and which also welcomes tours?

Yoshikazu Kawaguchi runs the so called 'Akame Natural Farming School' quite near to Osaka and has classes most weekend. His "school" are a lot of old fields up in the countryside. I'd say it is the closest you can get.

They are involved with an annual conference of natural farmers in Japan, which unfortunately you have missed for this year, but I am sure they would put you in touch with other farmers perhaps for WWOOF-ing.

How is your Japanese?

The Fukuoka's do have 'open days' (for the want of a better word) now and again, which usually means part work (to pay for the distraction, I guess!) part sight-seeing, and on Wednesdays there is a study group meeting there now which would give you a chance to meet with some of his old students/workers. I am not sure if it is open or by invitation but it is certainly in Japanese.

There are other organic farmers in the area, and once a month a mini-festival/fair at one of them in Uchiko. If you head down to Matsuyama, the Matsuyama Guest House is a good place to stay. Between Matsuyama and Uchiko there is enough to see and do to make it a pleasant long weekend away ... *but* it is a long way from Tokyo with no Shinkansen to connect you. Either you have to take the Shinkansen to Osaka and then ferry it down to Matsuyama over night, or take the Shinkansen to Hiroshima and then the fast ferry over from there. Flying is possible but scores you negative eco points.
larry korn
Author
Posts: 118
Location: Ashland, Oregon
27
posted 9 years ago
Thanks so much for posting this up-to-date information about natural farming in Japan. I haven't been back to Japan since 1975 so I'm a little out of touch by now. If you do find yourself in Matsuyama, be sure to check out the wonderful castle there and the public bath which is built over a natural hot springs. If I recall I think it's called Dogo onsen.

Dun Farmin
Posts: 9
posted 9 years ago
Thank you too for dropping by. I have to say I am particularly envious of your experience of Shikoku in the 1970s when ... although Iyo would have still have signs of taking a beating during WWII ... it was still is a far more native/natural condition. Even though it must have been freezing cold in the winter.

I guess you never cross paths with him but author Alex Kerr also found his way their in the 1970s and went even deeper inland to Iya to a different kind of farming.

You still see a lot of the cheap, wooden housing they threw up after the war. Most of the rice fields between Matsuyama to the Shigenobu River have been lost to more modern housing, and they've built a huge dojo and sports/cycling stadium along side it. Dogo Onsen is still there, surrounded now by the concrete of 4 star hotels, but is unique and, yes, the castle is one of the best in Japan. It's a good city to aim for for folks wanting to catch a feel of 'everyday Japan', rather than just Tokyo or Kyoto.

If you have time to consider the questions above, thanks; if not, I won't be offended.

What was the total acreage of Masanobu's land? I take it the citrus was the main cash crop that kept it all paid for?
Dun Farmin
Posts: 9
posted 9 years ago
The huge pagoda is still there ... what was the intention for it? The hut next to it is falling down now.
Fukuoka-hill.jpg 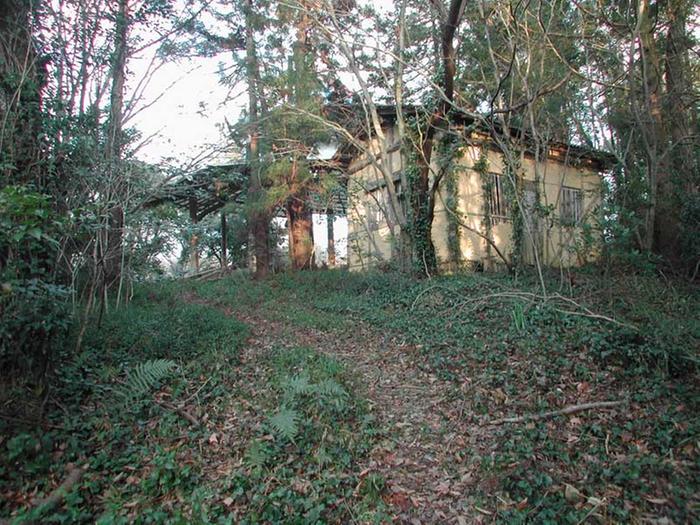 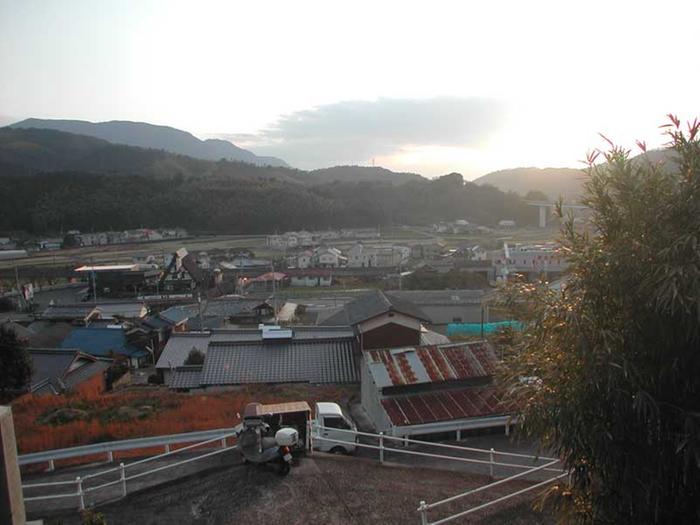 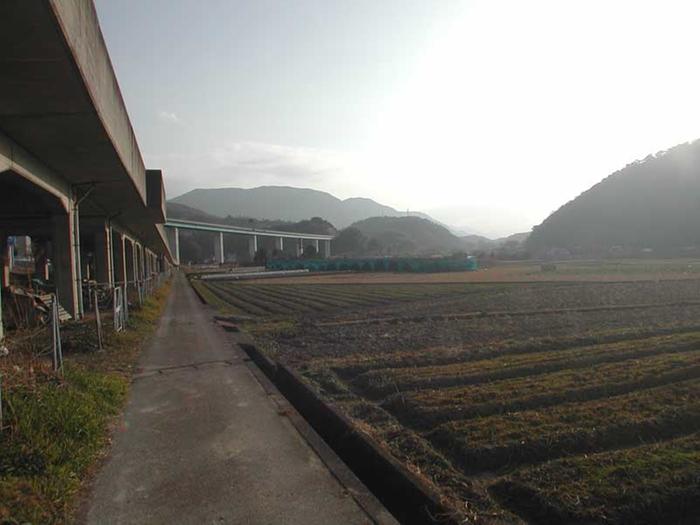 posted 9 years ago
Is there a lot of natural farming in Japan?
I have always the same question in mind and would like to find out the answer...

Larry, you say in the video and I had read it too, that Fukuoka had the same or better yields than the neighbours.
As he had less job and did not need a tractor, then it meant he could get a better income.
What prevented the neighbours to do the same as him?
(Or did they do the same and I just did not read it!)

larry korn
Author
Posts: 118
Location: Ashland, Oregon
27
posted 9 years ago
Fukuoka-san's rice/barley fields were about an acre and a half. The orchard was about 10 acres. Few people in Japan followed Fukuoka-san's example of no-tillage grain growing. I can think of several reasons why that was so. One is cultural. The Japanese do everything together as one family. There is a county extension service which "suggests" which rice varieties to use each year, when to plant, when to apply chemicals, when to harvest and so forth. Fukuoka did something completely different. Individuality and creative thinking are not particularly prized in Japan as it is here in the west. Plus, his fields and crops looked completely different than everyone elses fields with weeds and clover growing everywhere and insects of all kinds flying and crawling about. Even though he eventually got yields that were comparable or greater than those of his neighbors, they also remember the years while Sensei was still experimenting when he would sometimes got yields that were only 30 or 40% of the average. To other farmers in Japan he was considered an eccentric at best. Also remember that the mainstream of Japanese society was thinking that science and technology was poised to create a wonderful new world of abundance and leisure and Fukuoka's way seemed to be heading in the opposite direction. I just came across a wonderful little snippet in The Road Back to Nature. This is paraphrased but it goes something like this, "People ask me if natural farming represents a return to the past. I say, no!...it is a return to the present."

Those of us who were living at his farm when the Japanese version of The One-Straw Revolution came out knew that besides his compelling philosophy, his demonstration of grain growing without plowing or using chemicals, and his demonstration of what is now known popularly as an edible food forest would reach a wide and appreciative audiance outside of Japan. The English translation came out in 1979 and was a hit right away. It was quickly translated into many other languages and Fukuoka-san became well known all over the world. Still, in Japan he was little noticed. Strange how that worked out.

Gray Simpson
Posts: 67
Location: McDonough, GA
posted 9 years ago
The One-Straw Revolution wasn't much of a hit here in Georgia -- there was only one copy in the entire GA library system!

Wow. It is so beautiful and amazing that Fukuoka went "against the grain" and is still inspiring other people today.
Pat Mahone
Posts: 12
posted 9 years ago

larry korn wrote:Also remember that the mainstream of Japanese society was thinking that science and technology was poised to create a wonderful new world of abundance and leisure ...

I think, here, you've also put your finger on why his way was so hungrily accepted overseas in the West ... whereas Japan was just rapidly industrializing from agrarian feudalism, the hippie or 'back to the land' movements were headed in the opposite direction having seen through it.

Humans tend to need a certain amount of material wealth and comfort before they are willing to give it up.

I'd say the aesthetic of 'kirei' had a lot to do with it too ... it is usually translated as "pretty" or attractive, but has a strong sense of "tidiness". An attractive countryside would be one that is all neat and tidy.

(Not all are organic and certain not FNF).

EDITED by Staff to delete non-functional (obsolete) links. {Polk}
larry korn
Author
Posts: 118
Location: Ashland, Oregon
27
posted 9 years ago
It's funny that when I arrived in Japan I thought the neat and tidy rice fields were the most beautiful thing I had ever seen. After a few years with Fukuoka-sensei I can barely stand to look at them.

adreas Kastasdre
Posts: 2
posted 5 years ago
Hello to all.There is a student of fukuoka that is philosopher and agriculturist too. He is like fukuoka

He has his own jungle farm.He produce tons of fruit.
His name is Panos Manikis and he lives in Greece town edesa.His farm is visitable and he travels the world to regreen the earth and to spead the message of fukuoka.
You can watch his farm and inspiration here.He is incredible.