Tom Davis
Posts: 156
7
posted 7 years ago
I was watching Mollison's Global Gardener and he shows a place in Bavaria that uses them to oxygenate water.
A quick google search showed a lot of stuff about Biodynamics and flow forms.
For instance, http://www.livingwaterflowforms.com/agriculture.htm
I am mostly interested in how they put oxygen into the water.
I would also like to know how they are made?
Do you have any experience with them?
Thanks

A lot of things come out of nowhere, so look everywhere.

posted 7 years ago
I've never used one, but I've been totally fascinated by them since I first heard of them. What I read was a 'spiritual' view of how the gently swirling water somehow magically purified the water, so that stinky water would be transformed to sweet-smelling water by the time it reached the end of the flow form. But it seemed to me that the shape of the flow form would also be great for oxygenating water, gently swirling around and then dropping into a lower level would be a very good way of getting a lot of water in contact with as much air as possible. Stinky water is usually the result of incomplete breakdown of organic matter, due to anaerobic conditions. The incomplete breakdown products tend to form large, ring-shaped structures which our noses detect and interpret as 'bad'. Increased oxygen levels in the water will allow these large stinky molecules to break down into smaller, non-stinky molecules.

The lesson I took from this was that weird sounding woo-woo spiritual magicky stuff shouldn't be discounted, as not only may it work, but it may also have a perfectly logical scientific explanation. Which is why I'm glad we now have this biodynamic forum here on permies as I'd love to find out what other 'woo woo' is actually perfectly good science.

This is a a photo I took in Tamera, before the rains broke, of a flow form. It needs a clean out, and it's not flowing, but you can see fairly clearly the shape and imagine how the water would flow down into each bowl, then split and swirl in a figure eight pattern, then escape and fall into the next bowl. 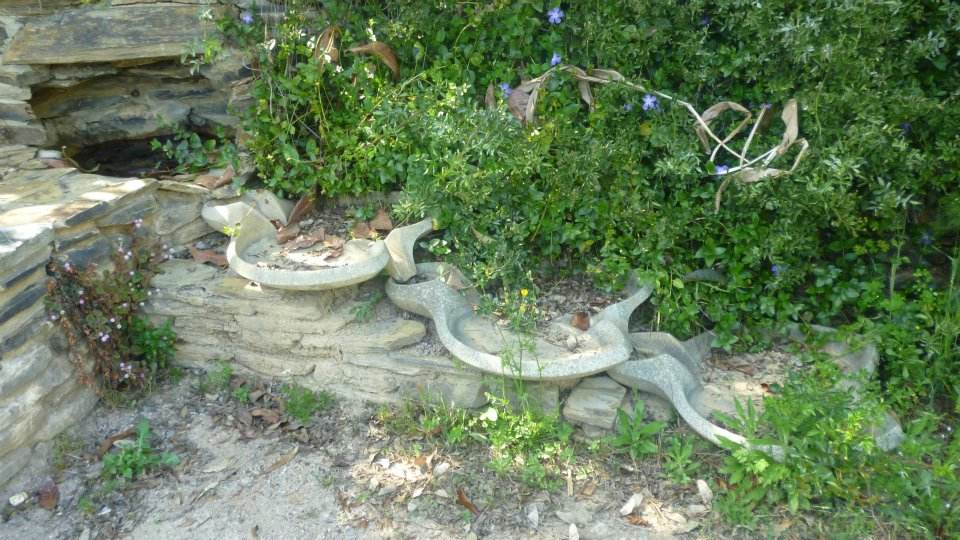 They also had this, more 'naturally' shaped version - it's in two photos as it was kind of long and didn't really fit into one photo. Taken after the rains broke! 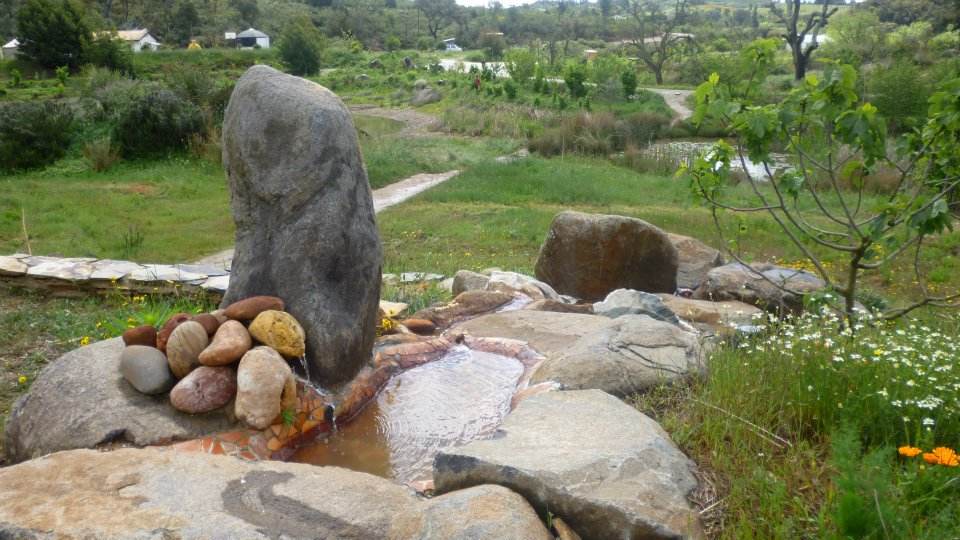 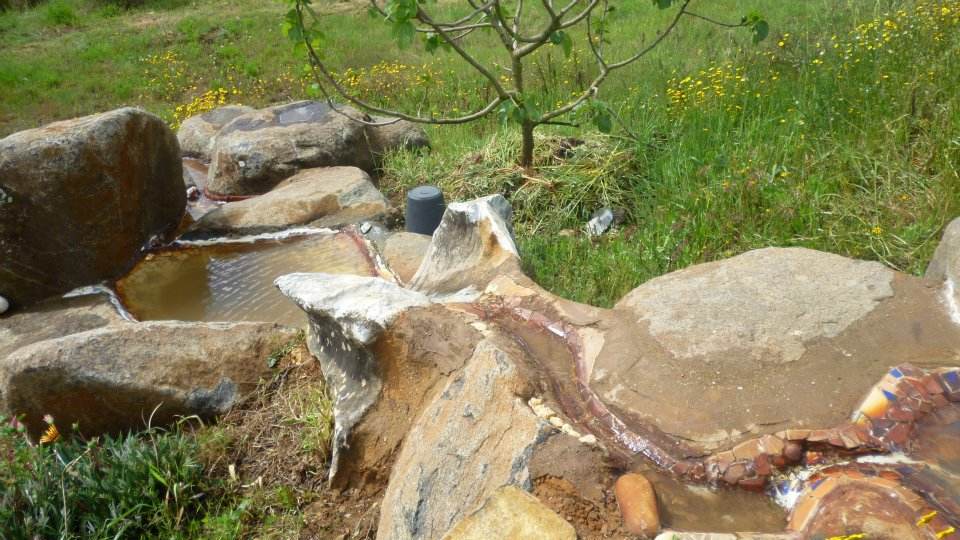 What I loved about this second one was the similarity between the flow form and the entire water retention landscape that they are constructing in Tamera, with a series of 'ponds' following the natural shape of the land, each flowing into each other. The main ponds are not dug, but simply dammed at the lower edge in such a way as to allow the water to build up naturally, seem constantly into the landscape, and when the water levels are high they also flow via the monks into the lower ponds. But, they did also say that to help the circulation of water, and hence the oxygenation of the water, they would dig out a strip of soil along one side of the lakes. The difference in depth would result in a difference in temperature, and water at different temperatures will circulate in much the same way as ocean currents. The spare soil would be put on their hugelkulture beds.

There was a lot of interest there in the spiritual aspects of water and movement of water, and I'm sure there are a lot of things that can be learned from studying it, no matter if your interest is spiritual or scientific. One of the speakers there, Rod Everett, recommended that I bought a copy of Sensitive Chaos - The Creation of Flowing Forms in Water and Air. It's arrived, but I haven't really had a chance to study it yet.

I'd love to hear anyone else's thoughts and experiences on water flow!

R Scott
pollinator
Posts: 3447
Location: Kansas Zone 6a
54
posted 7 years ago
It is the bubbling, splashing, falling through the air that put the air into the water. Just like rapids in a river.

It is done in industry all the time when they use river or lake water for cooling and then release it back to the source when done. It not only re-oxygenates the water but warms/cools it back to ambient temperature.

Tom Davis
Posts: 156
7
posted 7 years ago
Interesting, thanks for sharing.
Here is the clip with Mollison talking about them
http://www.youtube.com/watch?v=jGkHH4iFA0I&feature=player_detailpage#t=1492s
I wonder why Tamera are not using the preformed set?
I wonder how the preformed ones are made? Is it some math calculation that helps with optimal frothing and oxygenation? Or is it more simple?

A lot of things come out of nowhere, so look everywhere.

Matt Maxon wrote:I was watching Mollison's Global Gardener and he shows a place in Bavaria that uses them to oxygenate water.
A quick google search showed a lot of stuff about Biodynamics and flow forms.
For instance, http://www.livingwaterflowforms.com/agriculture.htm
I am mostly interested in how they put oxygen into the water.
I would also like to know how they are made?
Do you have any experience with them?
Thanks

Actually I am a member of a non-profit group that studies and researches such things here in Sweden. We explore things from the perspectives based on work by Viktor Schauberger.


-
Christian Sweningsen
Posts: 4
posted 2 months ago
I studied in John Wilkes' studio in the late 70s, even managed to make a (small) functioning flowform.

They are not "mathematical"; they can only be developed from experiencing the water flow in an actual instance, in a mass of clay, and working with the shapes to enhance the ways the water "wants to flow".

There are no shortcuts - except to find someone with a purchased example, who will allow you to make a mold.

And fwiw their function is not simple aeration.