Elia Charalambides
Posts: 78
Location: Boston
8
posted 8 years ago
Here it is. The bane of Olive growers throughout all the Mediterranean http://en.wikipedia.org/wiki/Olive_fruit_fly and now the states.

In Greece they call it the Dakos.

So my family has had olive groves in Greece for generations.

After learning about Permaculture I wanted to change the farming practices on our land to go organic and more permaculture minded, no sprays and no tilling. Though as I do not actually live in Greece to do the work myself(not yet) I had to speak to the farmer that we have employed, he tells me that the trees need to be sprayed to protect them from the Dakos and the only organic method to fight it is with traps, but if your neighbors don't use traps then it is pretty much useless to use them.

This seems like a pretty classic cookie cutter "Organic" approach. I.e. do everything the same as before just don't spray chemicals. Thats not very Permaculture in my mind.

Now I learned that one of the major causes of high acidity in olive oil is because olives infested with the Dakos are pressed (yes, the inferior quality olive oil you buy in the store probably has bug juice in it). Extra virgin olive oil is classified as having an acidity no higher than .8%. Which is very low. Apparently, my family's groves produce oil with acidity around .3%. Now given that is incredibly low acidity, they still need to be sprayed with chemicals to protect them from the insect infestations and I'm sure that has something to do with the quality of the oil as well. Who knows maybe we could even get it to .1% using Permaculture.

There must be a polyculture or guild approach that I'm sure was used but has been lost through the generations. Unfortunately both my grandparents are dead and other villagers are very, well how can I put this... fatalist(as many Greeks are). Does anyone here know of anything that can be planted to attract Dakos predators? What eats the Dakos? What can be planted with the Olive Tree to make it more resistant to the Dakos? Any Ideas? In Greece they say the Rose is the doctor to the grape. What is the doctor to the Olive? Would ranging chickens under the tree when the Dakos pupae emerge cause a decline in the poulation?

There must be something that used to be planted or grew with the trees before they ran sheep and goats underneath to eat every last green thing that sprouted from the ground and thoroughly compacted the soil.

Anyone growing Olives with success against the Dakos?

Elia Charalambides
Posts: 78
Location: Boston
8
posted 8 years ago
So I did some more reading and discovered that the insect has been observed to fly around testing the receptivity of the olives until it chooses the right one to infect.

Is it just me or is this a sign that if an olive is strong and resilient then it will not be chosen by the Dakos.

If so many olives, sometimes an entire trees crop is infested, than isn't that a sign that the tree is week and sickly?

There must be something that can be grown with it that will help make it stronger and more resilient. Or perhaps some method of growing the tree that would help it. I read someplace that an olive tree is actually a bush that has had all the suckers cut off. Though I have never seen an olive grown from seed without being pruned , I have seen "olives gone wild" in the countryside and they do look like huge bushes. Is this another one of those Fukuoka instances of doing something wrong right from the start? I'm sure shaping it into a tree was for harvesting purposes as you can't lay nets under a bush.

Jordan Lowery
pollinator
Posts: 1528
Location: zone 7
18
posted 8 years ago
Why mediteranian herbs of course. Understories of lavender, Rosemary, thyme, oregano, you get the point. There is a local olive oil producer locally that also gets a lavender crop for many uses, and lavender honey. My olives are still young but I've planted all of the above and a few more.

Posts: 7926
Location: Currently in Lake Stevens, WA. Home in Spokane
318
posted 8 years ago
Elia, I believe you are right.
Most pests seem to pick the weakest/sickest plant to infest. It must be Mother Nature's way of culling.

Here is a trap that has worked well in Spain, where it was developed:
http://cesonoma.ucdavis.edu/files/27233.pdf

And, the thing critter that may help control it:
http://insects.tamu.edu/fieldguide/cimg329.html

Elia Charalambides
Posts: 78
Location: Boston
8
posted 8 years ago
Thanks so much for all the resources John.

The comments on Biological Control are quite sparse but especially curious.
This being from http://www.ipm.ucdavis.edu/PMG/PESTNOTES/pn74112.html :

Biological Control. In sub-Saharan Africa, where it is believed to have originated, and in the Mediterranean area, the olive fruit fly is attacked by a number of parasitic wasps. However, the parasites common in the Mediterranean area do not provide acceptable control in commercial situations. Some naturally occurring parasites are known to attack olive fruit fly in California, but they do not appear to provide adequate control. 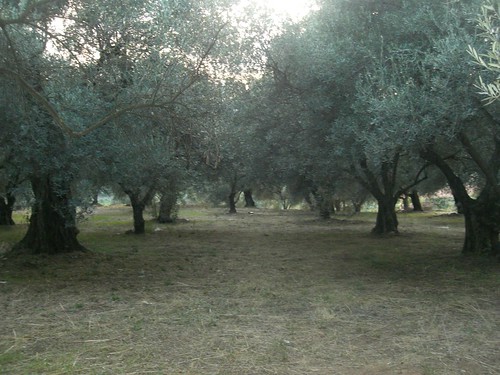 When did sights like these become commonly accepted as beautiful? How ironic. I grew up looking at fields and fields of this thinking it was so beautiful and now its about as pretty to me as acres and acres of corn. Damn you Permaculture!

Now back to the parasites and their habitats. Since it seems like all resources point to them as a starting point of biological pest control.
Utetes Africanus
Bracon Celer
Psyttalia Concolor
Psyttalia lounsburyi
Fopius Arisanus

Apparently Mr. Concolor seems to have high effectiveness in some trials in California. Anyone know anything about any of these beneficials and their habits, habitats, and what plants attract them? Perhaps offer alternative food sources? Overwintering/summering locations? Etc etc.

posted 8 years ago
Here you are Elia - are these prettier?

Elia Charalambides
Posts: 78
Location: Boston
8
posted 8 years ago
That Looks Beautiful! Especially the bottom shot. Was that taken in the spring? That seems pretty darn green for a Mediterranean summer! Just curious, do you have issues with the Dakos on your trees? If so how do you deal with it? What have you planted around them?

posted 8 years ago
We do have a few Dakos (or something similar - I never really researched them) but never enough to bother us. We don't have acres and acres of olive monoculture though, just a strip of land of about 3 acres along a seasonal stream with about fifty olives and whatever grows wild around them. There are quite a few wild pine trees, lots of heather, cistus, brambles, gorse, water hemlock, datura, orchids, an amazing variety of wild flowers which I haven't identified yet, fungi, lichen covered rocks, an old cork bee-hive belonging to a neighbour (it's been there longer than we have), wild boar (though I think they mostly just visit from elsewhere in the forest), snakes, lizards, and an incredible diversity of insects and spiders and weird creepy-crawlies. Most of the land around is either pine or eucalyptus, but there are occasional strips with old olive trees that have survived modernisation. I consider this bit of land my 'zone five' and don't really visit it very often, just to put the donkey around a tree for the day to keep the brambles and cistus at bay, or to gather olives, or sometimes when I need to get away from everyone for a while. Until a few years ago one of the neighbours would graze his goats down there and the brambles were under control, but now there is too much 'spare' land available and not enough livestock owners and the brambles are taking over in the places I can't tether the donkey. I can't let her run loose down there as it's not fenced, and as it's such a vital 'green' patch in amongst the pines and eucalyptus, I want to leave it unfenced as a sort of island for the wildlife.

The olives we pick are just for our own use and are pressed in a nearby village press - we drop off the olives and collect communal oil from the press later, so we have no real way of knowing how the number of bugs in our olives compare with other people's, or how different 'our' oil is from anyone else's as it's all just pressed as it comes and mixed up with all the rest.

And yes, those photos were taken in the Spring! It doesn't look much like that at the moment...