Ideal flame and pot size for cooking on a propane burner

Consider the following setup. Small propane stove with 1 burner. Pot with quart water and some rice or beans.
What's generally speaking the most energy efficient setup for cooking on propane.

Propane stoves usually have 1-2.5kW burners. I'm aware that with a 2.5 burner things heat up quicker, but what I'm after what is most energy efficient.
I can for example imagine that a huge flame doesn't transport the heat as efficient trough the steel of the pot, and therefore more heat gets wasted to the outside envioirment.

Next question. Is a wider pot more or less energy efficient?
My thoughts on that are that the bigger the pot the more heat it radiates. But a wider bottom 'catches' flame better so more heat goes into the pot.

I've many sizes of regular cooking pots; but also have a skirted pot that came with my silverfire rocket stove.
With its 1.7 gallon I would call it a big pot. https://www.silverfire.us/dragon-pot-only
The bottom is very wide because it has to fit over the rocketstove.
Anyway, I'm planning to use it on propane because I think the skirted design is also energy effient on gas.

But... most cooking I do would fit in a 6 times smaller pot. So I wonder if small unskirted pot is more effient than a big skirted pot.

Perhaps an additinal step in energy efficiency is cooking larger quantities for multiple meals. But then the choice is eating cold food or reheat, which also costs fuel.


Your views please?
Douglas Alpenstock
master pollinator
Posts: 2779
Location: Canadian Prairies - Zone 3b
728
posted 1 year ago
I think the skirted pot wins by a mile, as long as you are using a lid.

posted 1 year ago
The first question is, 'does the pot want to get hot?'
Other than carrying out some experiments by weighing the propane tank and recording temperature increases over time, I dont know how to do it.
Somebody may have somewhere though.

BUT, if you insulate the side of the saucepan, keep the lid on as Doug said, and watch it like a hawk, [ a watched pot always boils over! ]
It will heat quickly.
You can also get pots made of copper and with copper in the base, so there are alternatives.

I found this elsewhere;
Cast iron vs teflon vs aluminum. We’ve sized up the competition, the verdict is in and the coating is off!
Cast iron skillets are the best and the healthiest option for cooking and by far the most energy efficient. Utilizing its non-stick features (less oil), and dual ability to move from stovetop to oven, the cast iron retains heat and stays hotter than similarly sized pans. Built from the same material as engine blocks, the melted iron is then poured into pan shaped molds making it cheaper than handcrafted cookware. Cast iron skillets transfer heat incredibly well, making the handles extremely hot.
Cast iron cookware literally knocks out the competition!

FROM A better pot design
Thomas Povey, who happens to be a rocket scientist, is the inventor of the Flare Pan, the latest in lab-engineered cookware sold through nordicware.com. flare-cookware/. Tests have shown that the modified sauce and frying pans require 40 percent less energy to heat up, compared to a standard counterpart. They also claim that the improved efficiency translates to faster cooking times.

The secret to the Flare Pan’s energy-saving efficiency is a series of vertical fins that jut out along the outer surface in a circular pattern.
The aerodynamic fins prevents heat from escaping by channeling it from the bottom and up along the side, where heat can evenly distributed across more surface area, allowing foods and liquids to warm up much faster.
And while there’s already a popular alternative called the portable Jetboil system, which captures and evenly distributes heat through a similar fin-like “heat exchanger,”  that the product simply isn’t suitable for kitchen-style meal preparation. “Jetboil and other outdoor units are built for different functions, like boiling water mostly,”
Povey also says. “Optimizing something for domestic use is different because people are expecting a different quality of cooking and cookware that looks like it belongs in the kitchen and can be cleaned easily.”

I can see how a massively oversized pot would be a nuisance to cook in and clean up, especially in a tiny kitchen.

MSR makes a clamp-on heat exchanger for pots that were maybe 2 litres, for use with their multi-fuel stoves. They're rather spendy though. Perhaps a used one could be scrounged, or made?

Tony Masterson
Posts: 54
posted 1 year ago
Thanks for all the replies. I didn't answer them all but do read them for sure.

I like cast iron pots and they to distribute heat very well as written above
While I really see the benefits of heavy pots I wonder they are really saving energy over a (skirted) pot.
All that metal needs to be heated up first before the heat reaches my food,
So I think that's lost fuel unless you really use up all that heat by putting the pot in a haybox or let it simmer until the pot is cold.
But once again, I'm not stating anything as scientifically proven facts, because if I could then there's no need for me to ask these questions

posted 1 year ago
What is MSR please?

posted 1 year ago
I cook over gas when camping, and there is one style which by far surpasses all others in terms of fuel efficiency and cooking speed. It's the JetBoil 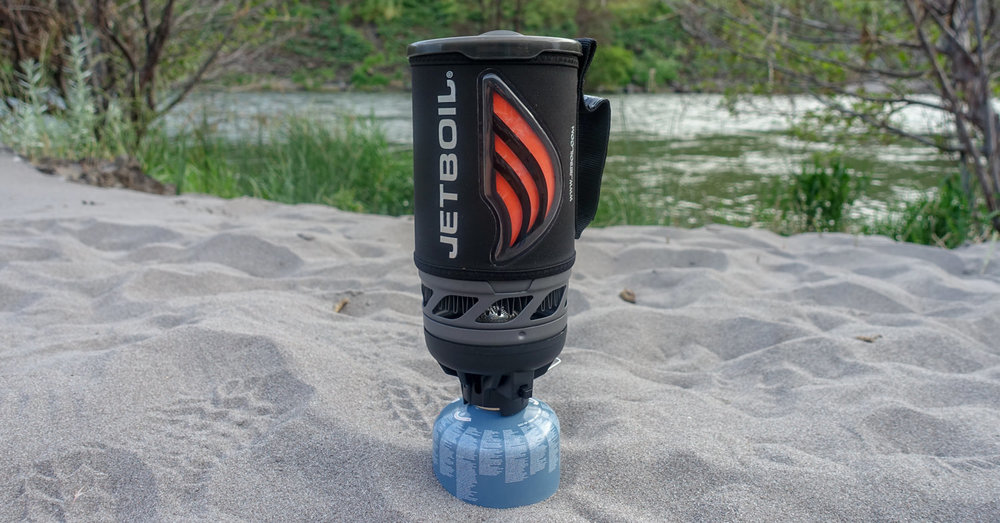 It has an integrated heat exchanger in the base, and insulated sides. Not your standard cookwear, obviously, and there would be issues using it long term at home, but it awesome.

In my last house I used camping wind screens on my kitchen stove because the ceiling fan created enough draft to noticeably change the boil times for my tea.

Silver fire makes a big skirted pot for rocket cook stoves but it works for gas, too.
https://www.silverfire.us/dragon-pot-only

There has been research and it's not a simple answer.  There is a relationship to the size of the burner that is hard to quantify.

Tony Masterson
Posts: 54
posted 1 year ago
The HE (heat exchanger) posts are interesting. A heat exchanger does exactly what I was trying to say in my first post. It increases the area and with that the ability of the pot to absorb the heat of the flame.
I found this quote on a backpacking forum:

re: what James said – I am SHOCKED at how quickly my Soto Windmaster will boil 10 oz of water using a 900ml short/wide Toaks pot.  It is literally 3x faster than when using the 800ml Tall/narrow Toaks.  I’ve not done any measuring or timing, but there really is no question.  All of my hiking buddies are shocked when my water is boiling in 45-60 seconds.

A clamp on HE doesn't feel well for me because unless it fits extremely well the airgaps will hinder the heat exchange.
As with everything quality varies but the concept does work. This test shows a 31.9% saving in fuel/time - click
I could post dozens of tests, but let's just conclude HE makes a difference.

But there is more to energy efficiency. Currently I'm doing boil tests with my skirted pot on a natural gas furnace.
While not HE I think the results I'll post when done testing will show the output of the burners make a difference too.
To put things to an extreme to make my point.
- You'll never bring a gallon water to boil with a candle. That means it takes an infinite time/fuel.
- Then there is the ideal burner output (which I don't know).
- A pot can't absorb the heat of 300 kW burner and most will be wasted. (the typical simple gas stoves output 3 kW on max)

Back to the kitchen to do some more testing :-) 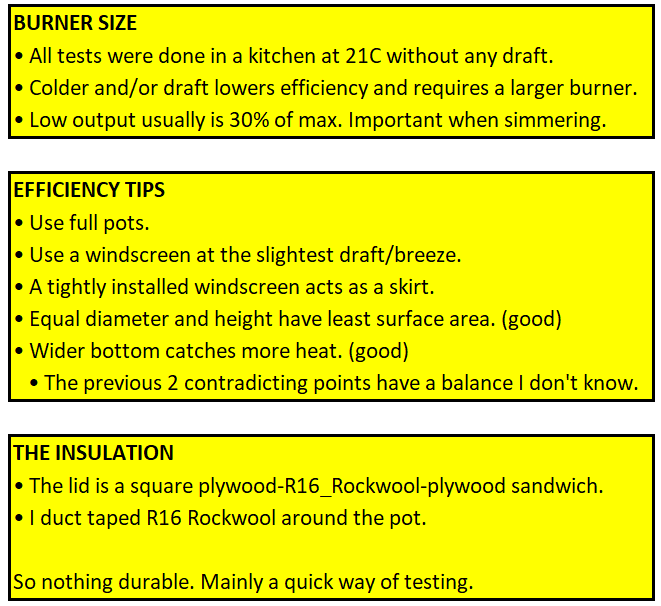 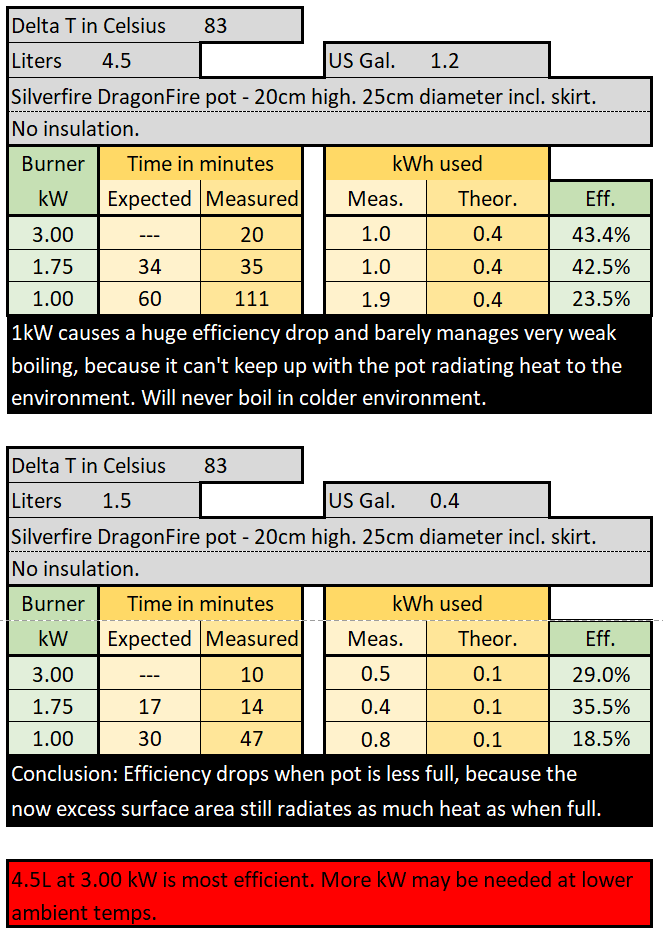 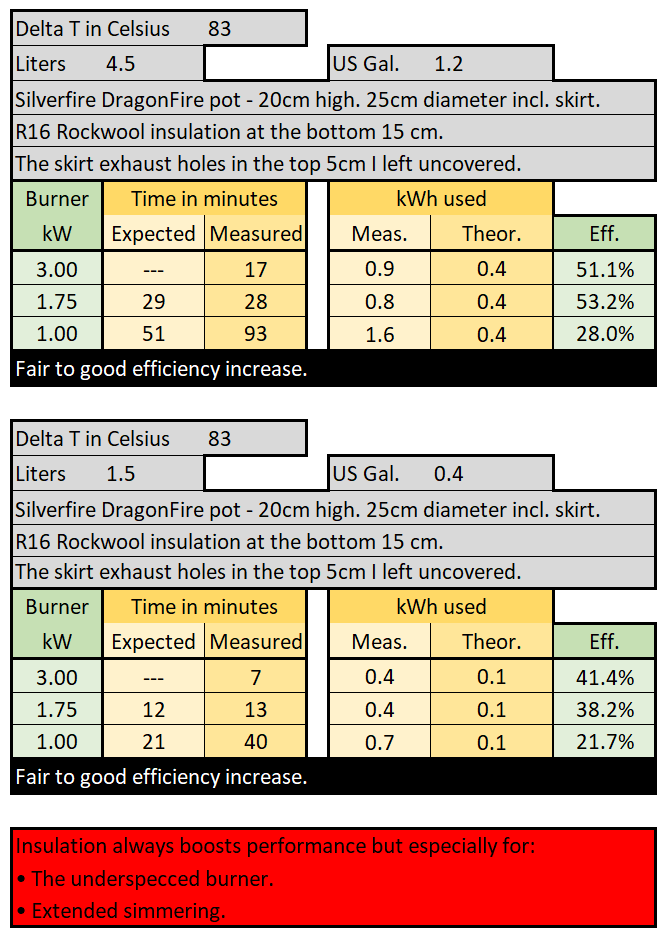 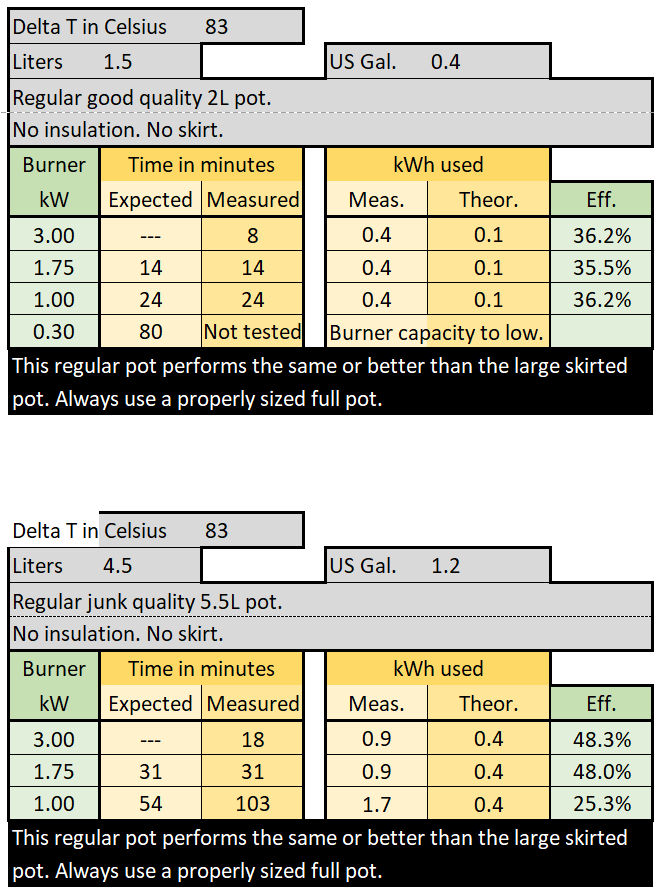 Tony Masterson
Posts: 54
posted 1 year ago
The above tests took me more hours than I can count.
Some results were very obvious while others are eyeopeners.
All best effort. No high-end equipment of any sort.
In fact all very low end.
The insulated lid is 2 square pieces of plywood with RockWool between them. Didn't lay very flat on the pot. Hard to see boiling. The most inaccurate numbers. Also the last thing to insulate it seems.
The insulation at the side of the pot is way better. But still far from perfect. It's very hard, read impossible to get a 100% snug fit of the RockWool around the pot. But still it was quite good.

Anyway, all the numbers give a good idea what to do for better performance. But don't get obsessed with that last digit,,, :-)
Tony Masterson
Posts: 54
posted 1 year ago
The next step..... pressure cookers as pot.

I have absolutely zero experience with a PC. But the fact that the take less water and trap more heat, must mean they are more energy efficient.
I've seen claims of 90% energy reduction.
-----------

I'm planning to buy a PC that works on a stove. A model without a big handle, or a removable handle because I plan to put it a haybox.
Maybe even play with a skirt and/or insulation.

----------
Another idea I'm toying with is a 12/24v PC.
But I'm not sure they are any good because regular PCs are about 1000Watt and the car/truck versions I found only 200 Watt.
If they heat up properly the low wattage would be great because I want to power them with a battery and/or solar panel.
I would put the PC in a haybox.
When my solar panel provides less than the needed 200W, or my battery runs down, the setup would still be like a slow cooker I think.
--------

About electric PCs using about 1 kW.
In my tests above 1 kW was shown insufficient for most things, but quality PCs use only 1 kW (some as little as 700w) so it must be more than sufficient.
So my guess is that a 1kW burner will be good for a PC.
--------

So... now I'm looking for cheap and simple PC.
Must be rather maintenance free.
The vent of some PCs need to be cleaned every time you cook. I don't like that.
I've read PCs with spring valves are quiet a bit more efficient than the other types that vent more steam = heat = energy.

So some ideas are welcome.

Tony Masterson
Posts: 54
posted 1 year ago
Added a few tests and some extra info to my initial tests.
Burner1.PNG 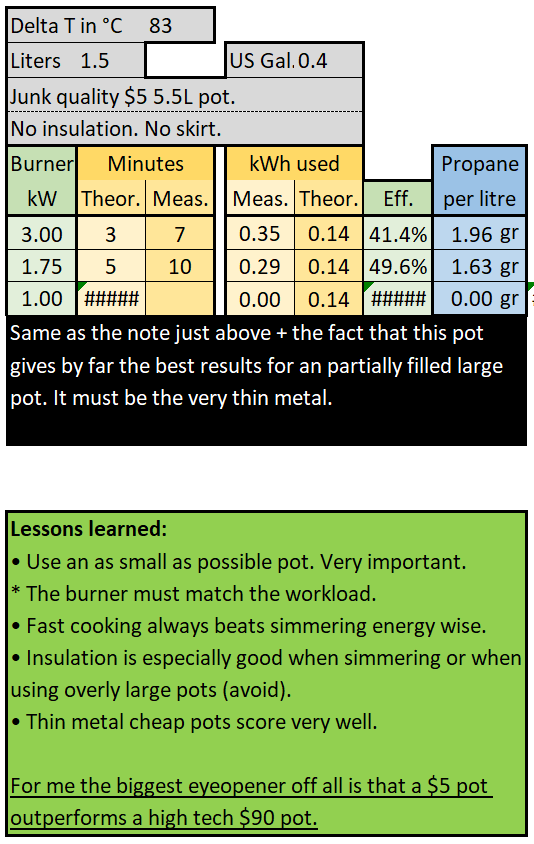 Tony Masterson
Posts: 54
posted 1 year ago
Bought a pressure cooker especially to add to the above tests.
But I'm stuck now because I have no idea how to measure with PC.
Can't even cook with it (yet)

But one thing I can already say for sure: It makes a huge difference.
I put in a handful of dry black eyed peas.
Put it on 3 Kw for maybe 3 minutes.
It kept blowing steam like crazy. Much too hot.
Then I moved it to my 1 kW burner to maintain heat.
Still kept blowing steam like crazy.
Then I turned the heat on minimum which is I think 0.3 kW. Only then the over pressure valve closed.
Let it cook for 10 mins I think. I really had no clue what I was doing (and still haven't).
But the bean were so soft they started falling apart. They even started dissolving because the water was dark brown and half of the beans was empty. By that I mean the husk was still there but half of what's inside was gone.

So I've cooked  the unsoaked beans way, way to long. And even that was much shorter that cooking pre-soaked beans the ordinary way.