posted 2 months ago
I have two wisteria vines one has not spread but the other one sure has, starts coming from here and there and even though I cut this back so bad this year hoping it would die off it now is growing again like crazy. Do I need to cut down to the ground and dig up the root plus all the other starts it has grown?

Here is the one that behaves itself

posted 2 months ago
Ours spreads like that too. (Dad called the extension office for care advice before he planted it. He was told: Step one, get your chainsaw running. Step two, plant the wisteria. I think step three was good luck.) I notice, though, that it doesn't seem to travel very deep underground. I wonder if a trench around it would contain it? (The guy that sold my wife my bamboo controls it that way. Takes the tiller one lap around it, then I think he shovels out the loosened soil.)

Sheep and goats like it. I don't know if it's okay for them to eat, but I've never noticed mine getting sick from it.

posted 2 months ago
Yes, Wisteria has that reputation. I know it spreads by branches touching the ground and sprouting roots. I haven't seen mine put up suckers.
I treat mine *very* badly, and it still lives. I think actually trying to get rid of it would require persistent chopping off every sprout it makes in an effort to exhaust its roots.
Alternatively, you treat it as a bio-mass manufacturing plant. Because mine's up off the ground, I harvest it's leaves several times every summer, and in the fall at leaf drop. This is essentially weed free mulch and I've used it around my rhubarb and I covered a whole 4x8 ft bed one year, and used some of the whips on top to stop the leaves from blowing off. At the moment, the over-growth on mine is providing valuable shade for my bedroom, but it is soooo... on my list to at least do a partial chop. My plan is to chop the whips long and put them in the sun to be sure they're dead, then wind them around some bamboo stakes in an effort to get a pile of horse shit to be more vertical and less cone shaped (horse balls tend to roll!) I'm just going to have to watch to make sure they don't sprout!

Wikipedia says it's a nitrogen fixer - it's definitely in the legume family judging by the pods it forms - which may be partially why it can be hard to kill.
Wisteria is a genus of flowering plants in the legume family, Fabaceae (Leguminosae) - https://en.wikipedia.org/wiki/Wisteria - is worth a quick read. It is certainly a plant I'm cautious with as I don't want it to take over. From your description Susan, the aggressive one might have some subtle difference in the soil, sunshine, or water levels that is facilitating its expansion.

posted 2 months ago
I forgot that they do put up edges underground to prevent spreading of bamboo. This Wisteria grows out suckers anywhere it wants not just from the trunk. I treated it real well while it was getting started then a few years went by and it went nuts taking over anything in its path.So I m guessing I created a great root system for it with all the TLC.  I did have luck drilling holes into tree stumps and pouring in Epsom salts to kill the stump, I should try this..just forgot about it.
Susan Boyce
Posts: 168
Location: Myrtle Creek, Oregon
13
I like...

posted 2 months ago
It sounds like it will be great for a compost pile and mulching like you mentioned. I just started doing chop and drop when I prune most plants. The leaves should shed themselves from the branches. I'm not sure why one is more aggressive then the other but the aggressive one does get much more afternoon shade. I assumed it was just a different strain of wisteria, maybe your article will tell me that? I'm just glad the other one keeps to itself because it's so pretty in the Spring.
Susan Boyce
Posts: 168
Location: Myrtle Creek, Oregon
13
I like...

posted 2 months ago
Did you check out the wisteria tree from the link you sent? 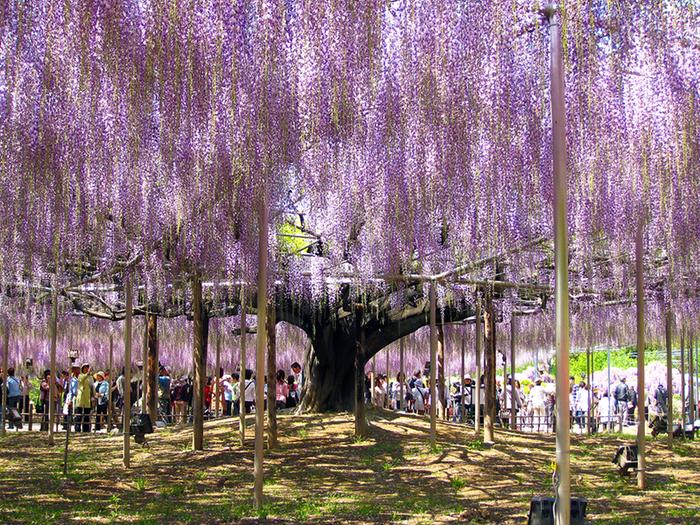 Susan Boyce wrote:Did you check out the wisteria tree from the link you sent?

No time, but that's awesome. It clearly has a serious trellis system!

posted 1 week ago
When we first got married, the house we bought had a small wisteria next door.  When we left 5 years later, it had demolished the fence, pulled the clothes line over and headed in to the neighbours on the opposite side.  The more we chopped it out and dug it up the more the tendrils shot up from the remaining root fragments.  To my understanding it is a plant for the not so soft hearted, needing regular maintenance and control to eliminate if from areas that you do not want it.  The roots will crack floors and take over the area surrounding.

My advice would be that unless it is well away from your home and subterranean infrastructure, and  you have the time to manage it, think about something else.  Note that even in the edible sub-species, the seeds are toxic so they should not be eaten or allowed as pick for animals.

Thanks Susan for starting a great thread.👍✔

Failure is a stepping stone to success. Failing is not quitting - Stopping trying is

posted 1 week ago
Apparently you can eat wisteria flowers (ONLY flowers not anything else) the rest is poisonous. That's just what I've read from a Peterson guide to edible plants. Plucking all the flowers off could kill it. What I have to do is uproot the long roots underground every year. Either that or smother it with weed barrier. I don't do chemicals..
You could look into growing a competitive plant that may fight/ kill the wisteria. Kudzu is much safer for plants than wisteria in that it doesn't choke them out. Better yet a variety of climbing bean thrown all over. You could try putting all pests you find on the wisteria and eventually you may selectively breed a pest that eats wisteria (plucking caterpillars off a cabbage for example and moving them to wisteria.. eventually one out of 50 survives since it was able to survive on wisteria unlike the others. Then it will remember that and lay eggs on that wisteria next year etc.) Just saying!
Benedict Bosco
Posts: 6
Location: Upper Midwest
I like...

posted 1 week ago
A friend of mine here in North Florida inherited the "family" farm from her grandmother several years ago,...  Remarkably, the only condition regarding the property listed in the will was that "she never plant Wisteria on the property"...
Jay Angler
gardener

David Fraleigh wrote:A friend of mine here in North Florida inherited the "family" farm from her grandmother several years ago,...  Remarkably, the only condition regarding the property listed in the will was that "she never plant Wisteria on the property"...

This does seem to be one of those, "know your precise variant and know your ecosystem", situations. Maybe I'll add, "and know what care it will require to keep it civilized". Even in my ecosystem, it is a plant that requires watching, but that's more a monthly check in the growing season, not a weekly check year round. There are plants I've hesitated to plant because of their reputation, but if I decided to try, I considered natural controls before even buying the plant. One I planted in an area which is on the shady side for it and that seems to have worked.

Lee Taylor
Posts: 1
1
posted 1 week ago
This may be off topic. While commuting..there was a huge tree in a field that was covered in wisteria, and every year around Easter. It would turn purple and would resemble a cross. I was able to get a picture one time on a flip phone but, alas, no picture. Then to my dismay. One a trip past the field,the owners cut down the tree and burned the pile. I was saddened by it. But I have always loved it and the fragrance. This is my first time posting in a forum. I love the stories of 'life out west'..giggles, here on the east coast..thanks,leet
Jane Mulberry
pollinator
Posts: 226
Location: East of England
108
I like...

posted 6 days ago
Oh another thing the vines make great baskets. Basket making is actually simple if you look up the basic structure. You could even make sandals out of them.
Michael Cox
pollinator
Posts: 3107
Location: Kent, UK - Zone 8
432
I like...

posted 6 days ago
Wisteria needs a strong support system and a regular pruning cycle that MUST NOT BE MISSED.

Basically cut back to the main frame work in the winter time, selecting an appropriate number of main branches. And then there is ideally a summer pruning as well, after flowering has finished. I'm not an expert, but missing a year gives you a rampant tangle, with the possibility of new stems rooting where they touch the ground.

But the flowers are bloody marvelous, and they remind me of my grandparents house when I was little, so we tolerate the effort.

Seth Japheth wrote:Oh another thing the vines make great baskets. Basket making is actually simple if you look up the basic structure. You could even make sandals out of them.

I was wondering about that. When would you harvest the vines for basket making? Any hints related to this specific plant? I haven't made baskets before, but it's on my "I want to learn how" list!

Brooke Dryden
Posts: 2
posted 6 days ago
As crazy as it gets, I miss wisteria! Can’t grow it in my climate.
Seth Japheth
Posts: 28
Location: Zone 8: hard clay soil
2
I like...

Seth Japheth wrote:Oh another thing the vines make great baskets. Basket making is actually simple if you look up the basic structure. You could even make sandals out of them.

I was wondering about that. When would you harvest the vines for basket making? Any hints related to this specific plant? I haven't made baskets before, but it's on my "I want to learn how" list!

Any time that the vines are alive (green) and the right size. Of course in winter they're probably crispy so I suppose summer is best for bigger vines and spring for finer vines. I pull the vines down in pieces as long as I can get. Then I cut the nodes so it's smooth. Then it's just that simple start with six bigger vines making the British flag symbol the x with the third line. Then use fine vines for the start- -wrapping over and under the middle part over two under two and then add in another vine so now there's seven symmetrically and over one under one and kind of bend the seven frames into the basket shape after the base is the right size. And just add in a new threading vine whenever it runs out.

Eino Kenttä
Posts: 60
14
posted 3 days ago
If you need a way to kill it off, I remember hearing about someone killing some trees in a park (why, I don't know) by injecting sodium hydroxide solution in the trunk, probably under the bark. Haven't tried this myself, but might be worth a shot.