Ansis Klavins
Posts: 32
21
posted 1 year ago
I'm starting a Moschata squash landrace this year.
I want to breed a landrace that has the aesthetic of Japanese Moschatas, but shorter time to maturity. 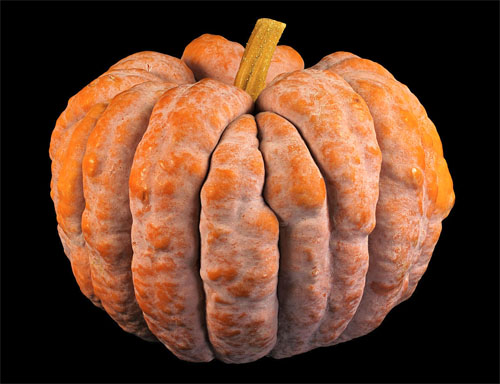 We have a short growing season here, last frost usually mid May and first frost mid September, although there have been heavy frosts as late as mid June and as early as 1st of September.
So the frost-free growing season is anywhere from 75 to 120 days. Not the prime area for Moschatas, especially Japanese varieties that need about 120 days to maturity. 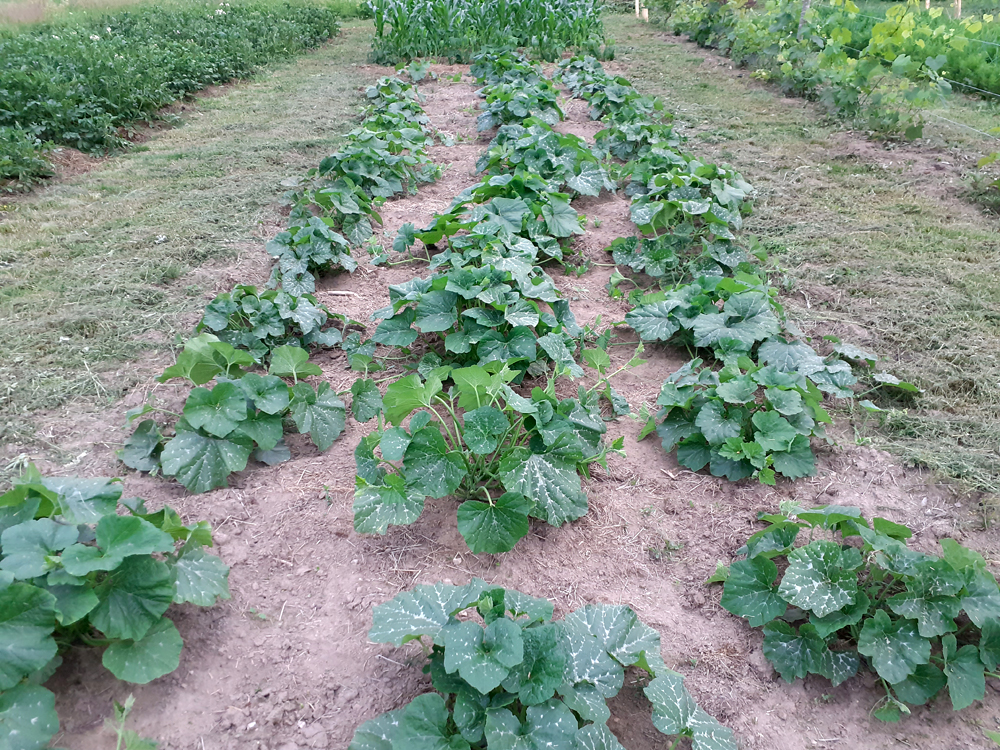 The middle row is Lofthouse, the outer rows are the rest.
Even though I planted Lofthouse squash 2 weeks later, it is quite a bit bigger and more vigorous.

I've not decided yet how to best proceed with pollination. Leave it to chance, do some manual pollinations, remove male flowers on Lofthouse or the other varieties.
Probably have to see how the flowering goes.
If there are male flowers on the longer season Japanese squash early enough, it would probably be best to pollinate the Lofthouse squash with them so I have more reliable seed maturation.

If all goes well, next year I would plant the seed all mixed up, let it open pollinate and see what comes out.

I'll hazard a guess, that by the time those squash start flowering, that they will be too overgrown to easily tell which flowers belong to which rows...

My preferred strategy is to use shorter season varieties as the pollen recipients. More likely to get viable seeds that way.

Ansis Klavins
Posts: 32
21
posted 1 year ago
We are having the hottest summer on record this year, good news for moschatas I guess.
The field is filling in nicely. 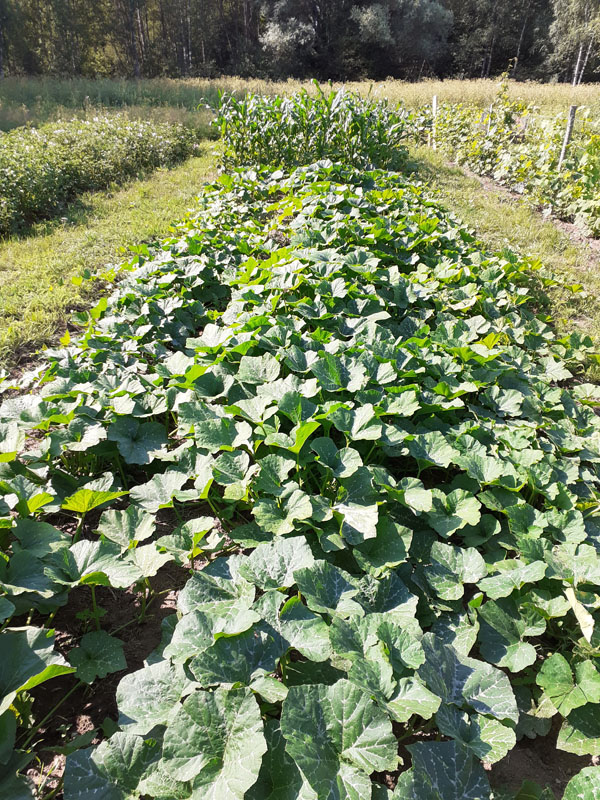 Today I got the first flower, it's a female one and on one of the oriental plants.
Unfortunately there are no male moschata flowers open yet, so I went ahead and pollinated it with 4 different maxima pollen donors. Maybe I get lucky and get an interspecies cross, that might be interesting. 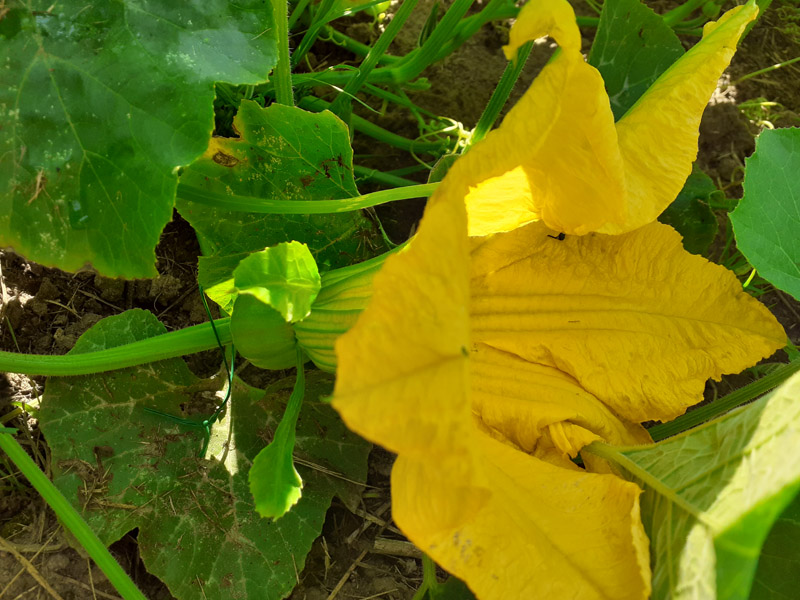 Now I understand that my idea for removing male flowers on the middle row was unrealistic... There are like a gazillion budsites forming and vines are starting to intertangle.
So maybe I'll go for open pollination and a few manual crosses.

posted 1 year ago
Really nice project. Are you familiar with Zero Input Agriculture? There is a lot of inspiring information on his blog about open-pollinated landrace breeding. His approach is "throw as many likely varieties as possible in the ground and see what emerges over a few years". There is also some wisdom about not simply selecting the largest or most desirable fruits as they may only be suitable for that year's climate - it's always worth saving a mixture for seed.

Ansis Klavins
Posts: 32
21
posted 1 year ago
Thanks for the tip, I haven't seen that blog yet.
Seems that my approach is very similar

Luke Mitchell wrote:Really nice project. Are you familiar with Zero Input Agriculture? There is a lot of inspiring information on his blog about open-pollinated landrace breeding. His approach is "throw as many likely varieties as possible in the ground and see what emerges over a few years". There is also some wisdom about not simply selecting the largest or most desirable fruits as they may only be suitable for that year's climate - it's always worth saving a mixture for seed.

Ansis Klavins
Posts: 32
21
posted 1 year ago
The Moschata patch seems to be doing well.
The leaves have picked on a salad green/yellowish hue as the weather changed to colder (or maybe there's a deficiency of some sorts), but seem to be growing fine. 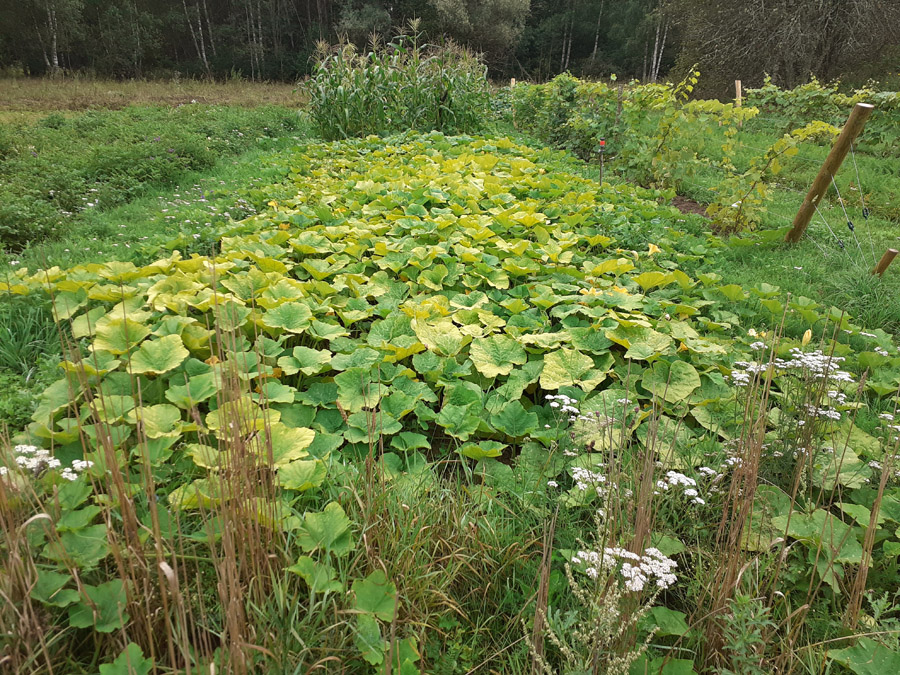 Seems like I will get enough mature fruit of the asian type to save seed from them for this project.
The rest of the seed will go in a separate field.

There is very intense bee activity with one or multiple bees/bumblebees in each flower every morning, so I didn't bother with controlled crosses (lazy)

There's one plant that is throwing these crappy mutant fruit that are half vine/half fruit. I should've culled earlier, but somehow missed it.
I hope not saving seed from it will be enough to eventually eliminate the trait. 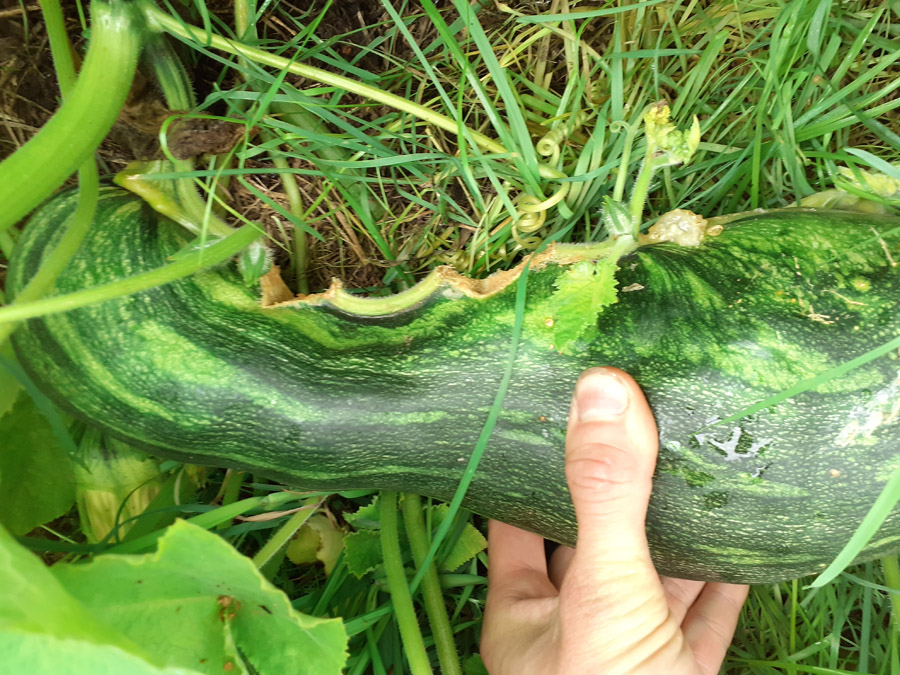 There is plenty of variety in the patch.

This one is massive 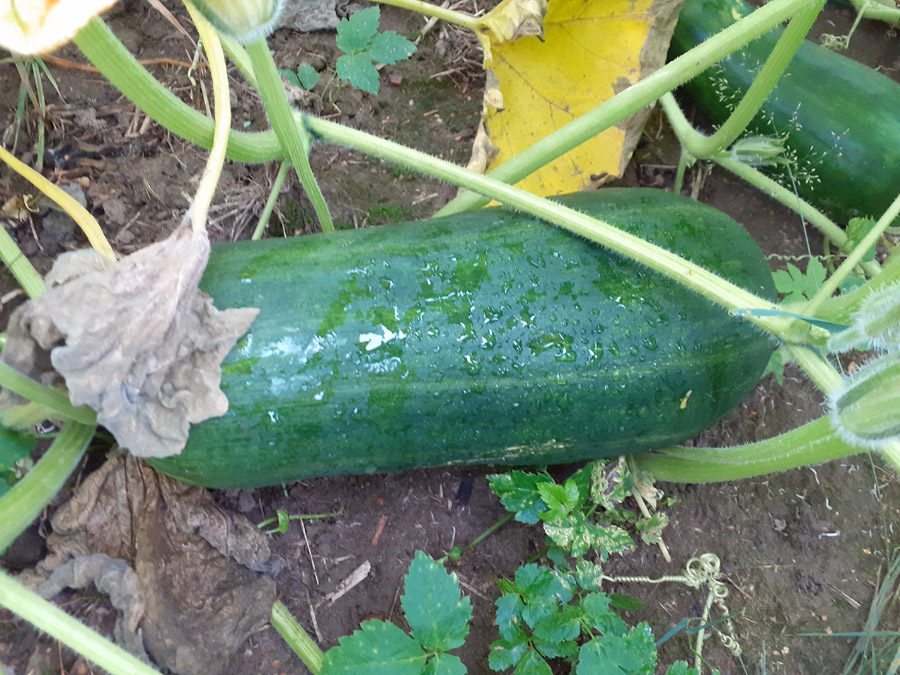 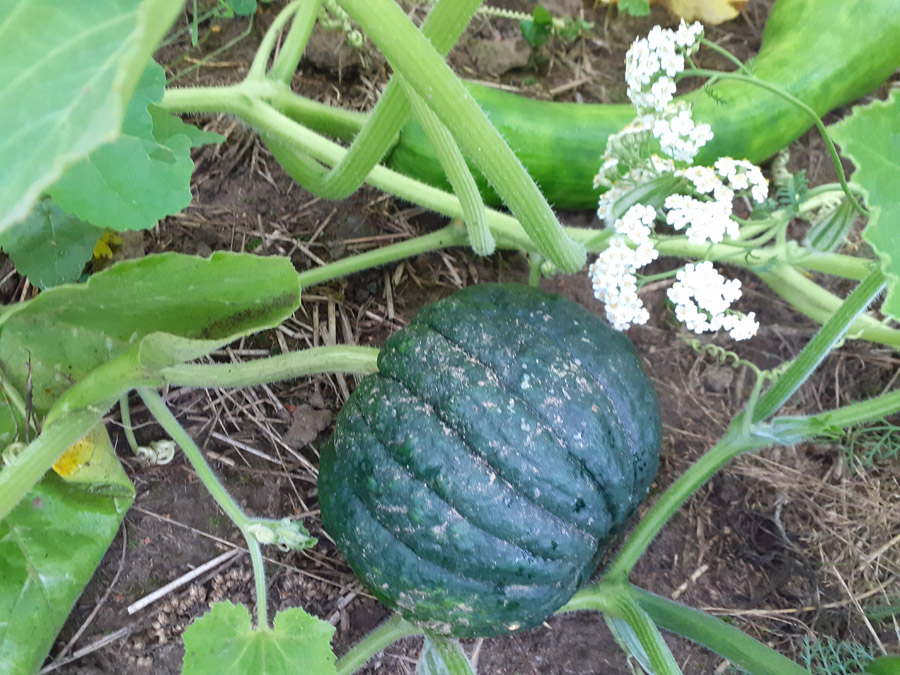 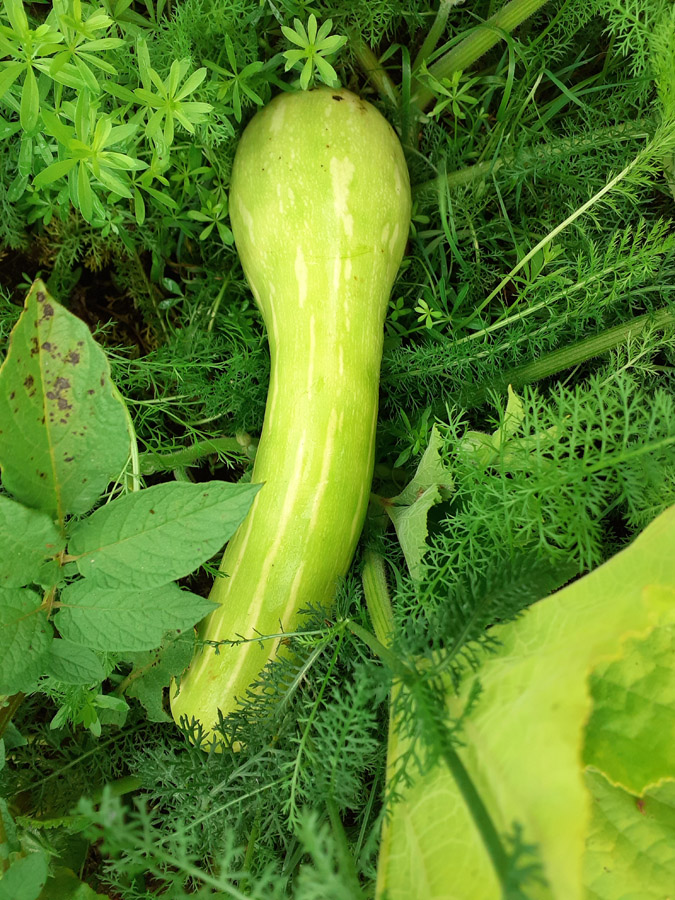 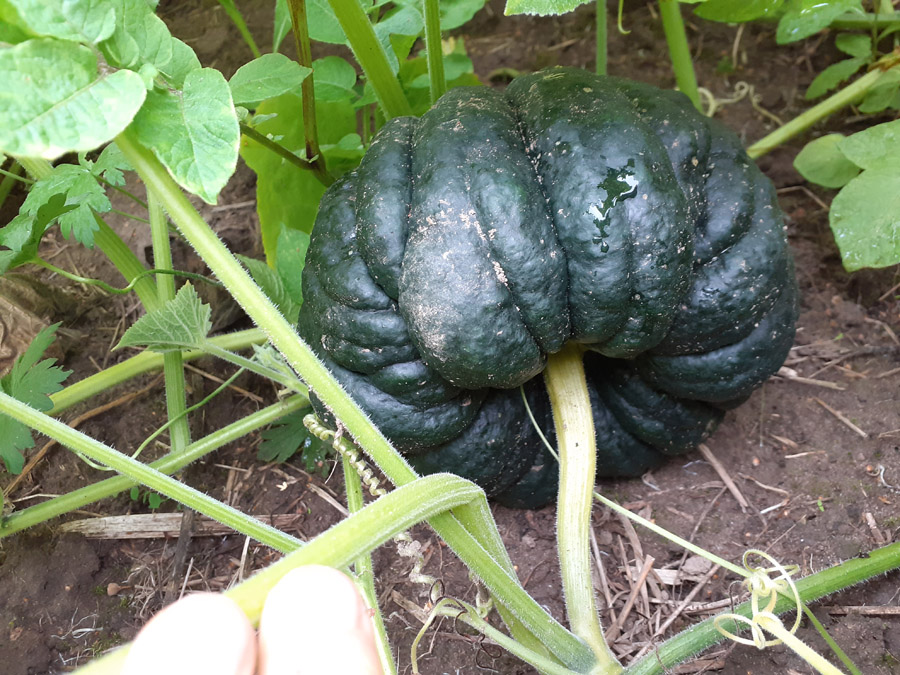 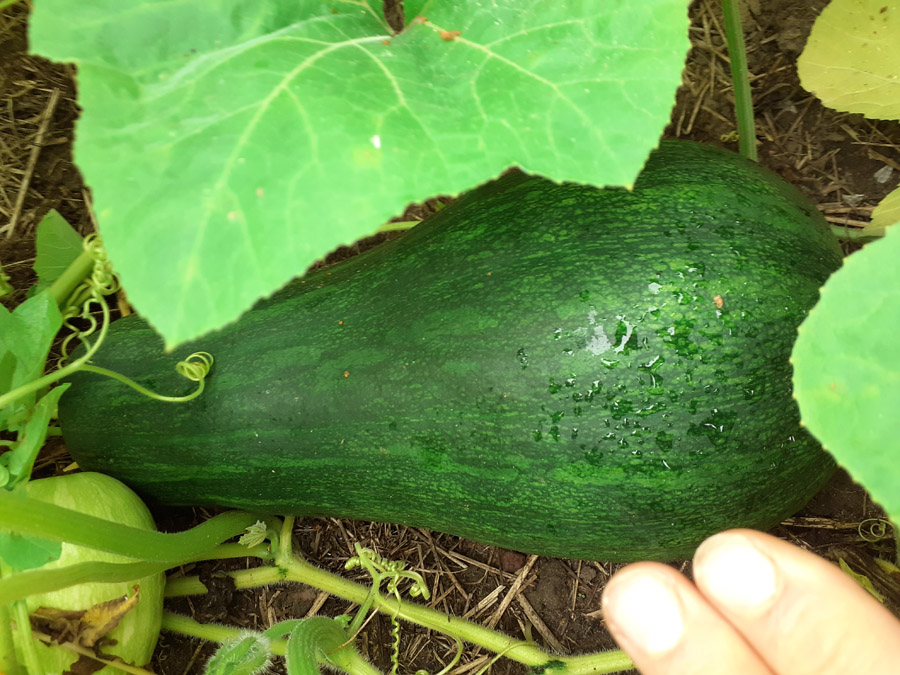 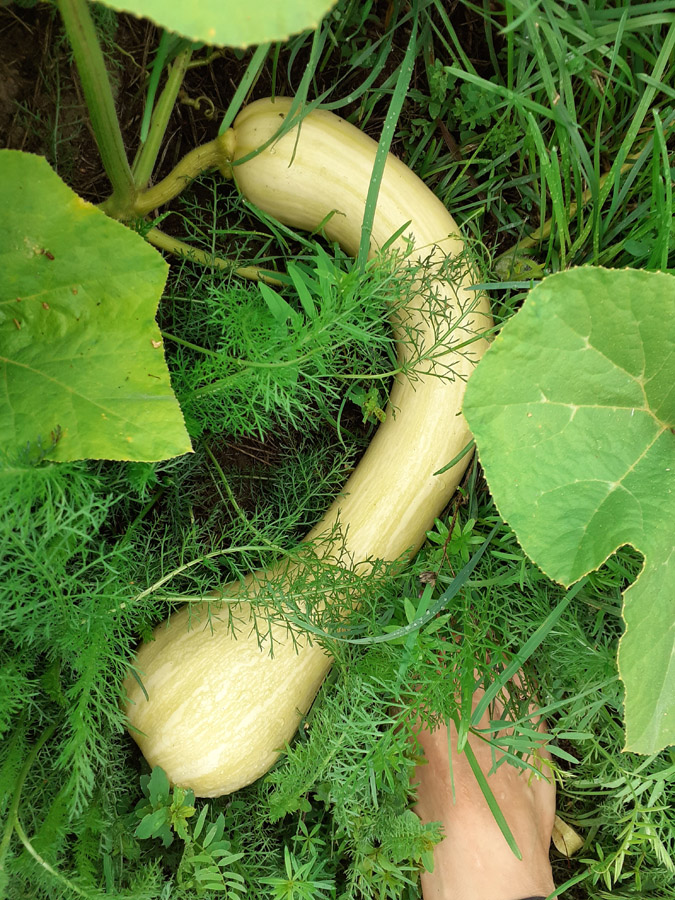 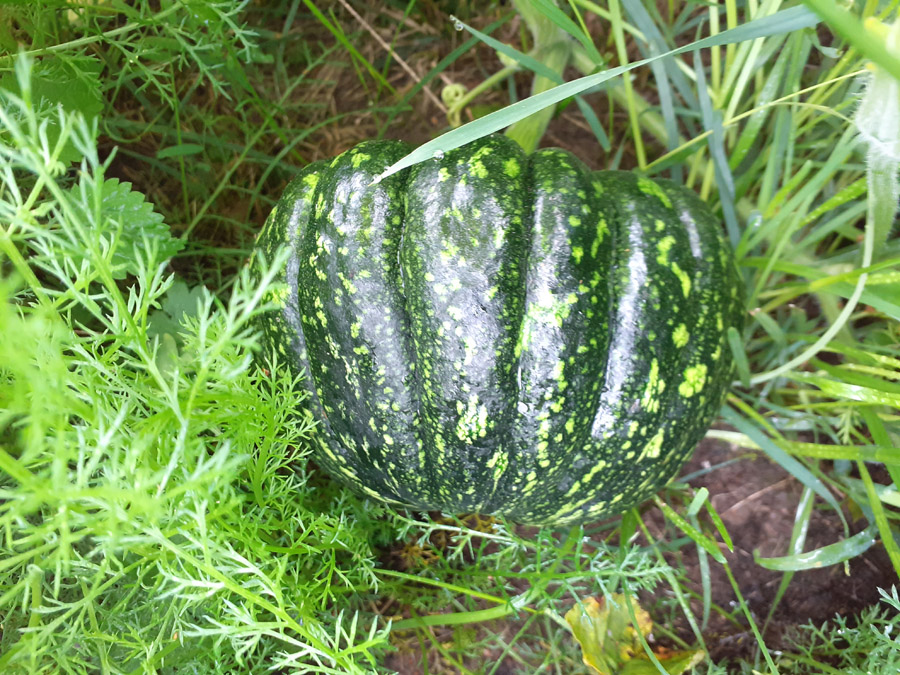 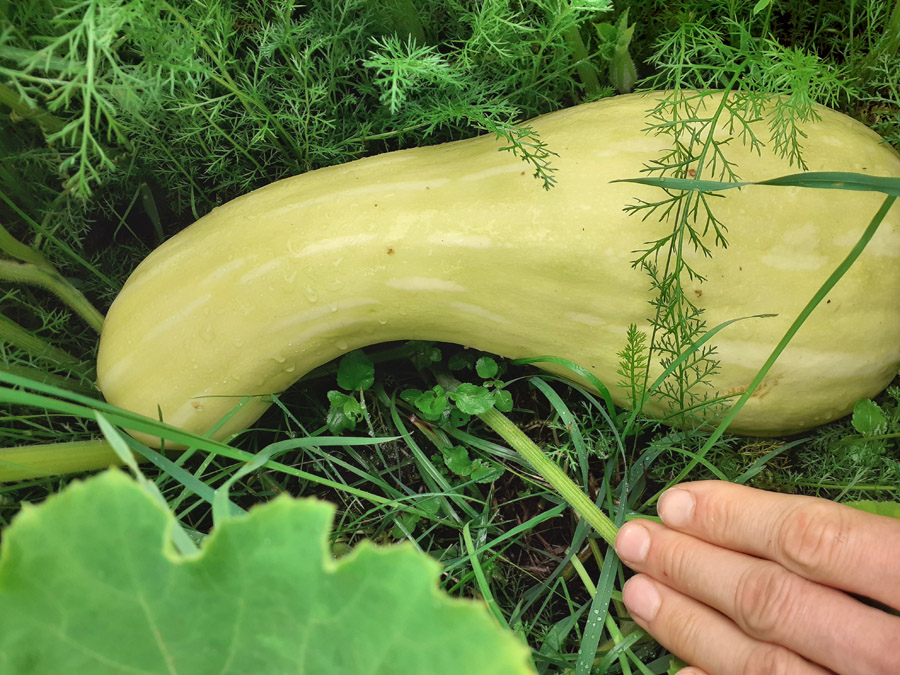 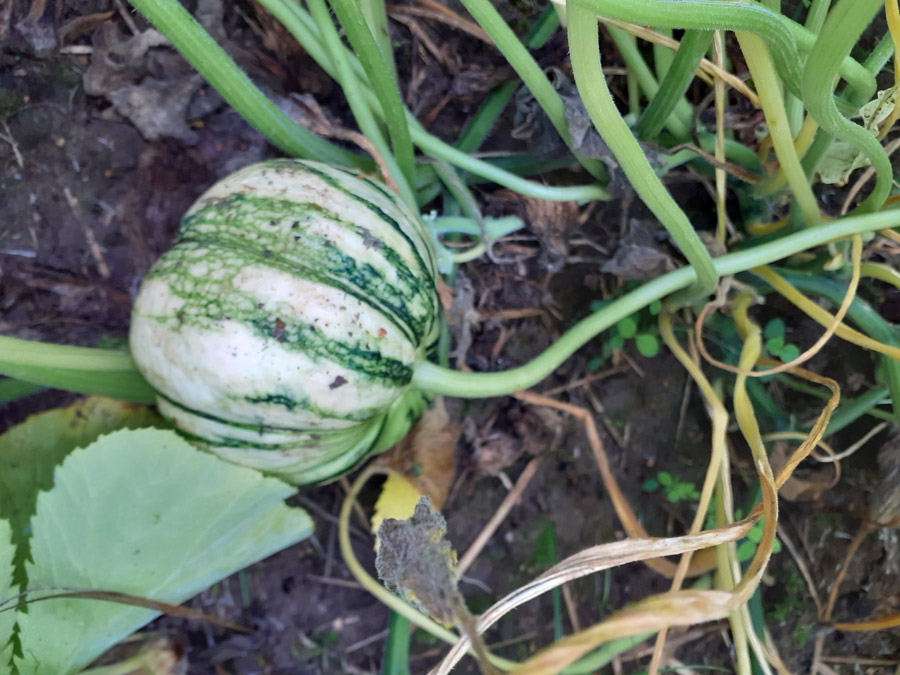 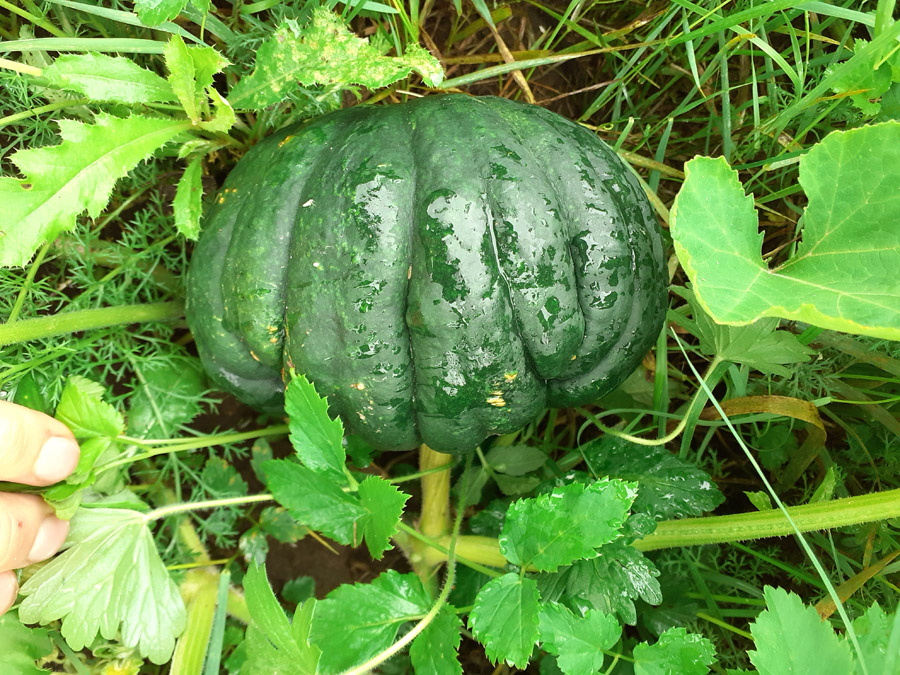 Ansis Klavins
Posts: 32
21
posted 1 year ago
I harvested all my squash before the first major frost.

Here's the group shot of the moschatas 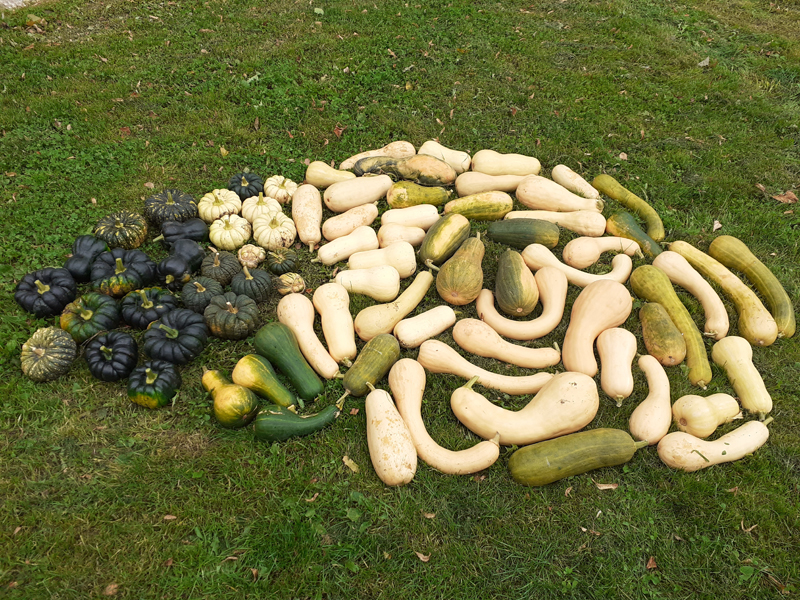 Here are the oriental varieties 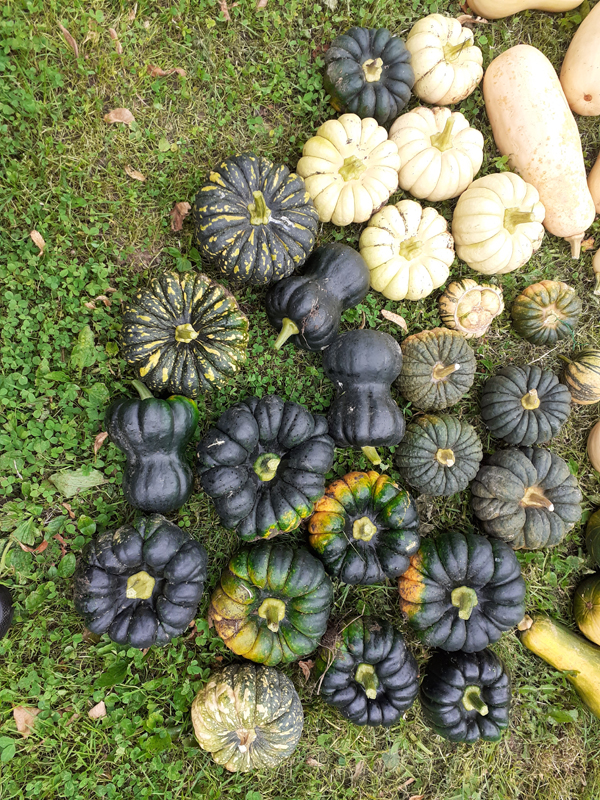 I'm not sure how many of those will have viable seed.

The weirdest one is this, none of the varieties I planted are supposed to have fruit like these 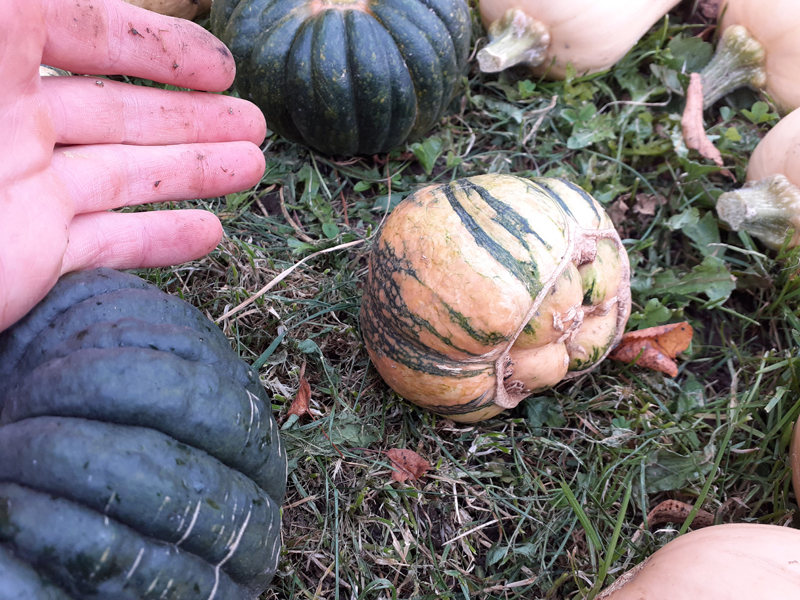 Some of the butternut types have some damage on the side that was on the ground, I'm not sure if it will heal or go deeper. Either way, I won't be saving seeds from those. 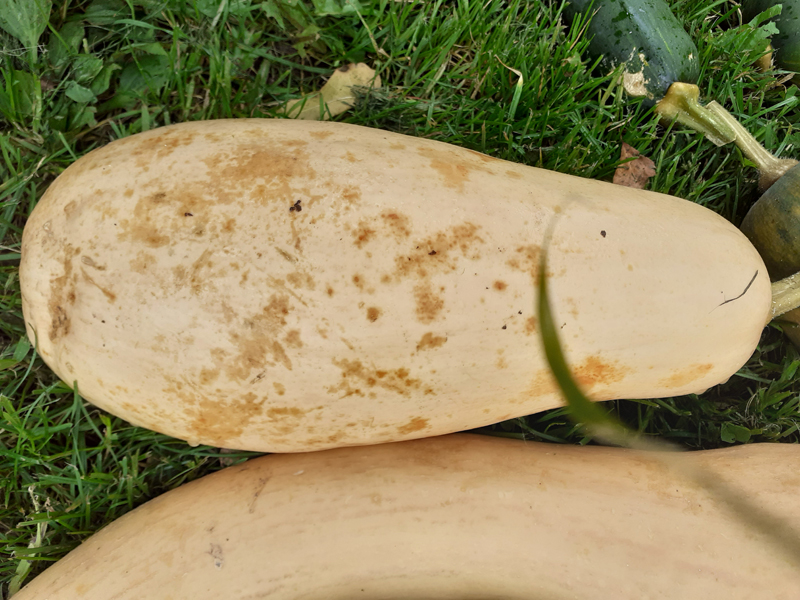 Finally, my total this year's squash harvest including marrows and maximas 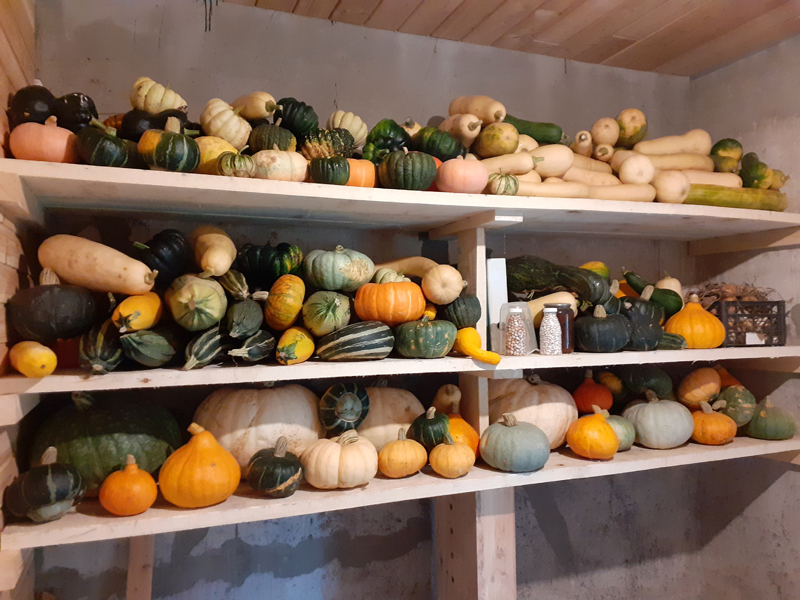 Josh Mayfield
Posts: 3
posted 2 months ago
How’s this season looking for you?

I’m trying my hand at crossing moschata for the first time this year, which is how I found this thread.