brett watson
Posts: 100
Location: Northern California Zone 8b
1
posted 9 years ago
It was either on a podcast or in the forums somewhere.
I have been searching various variations for the past 10 minutes and haven't found it.
Can anyone point me in the right direction.
I remember him being pretty jazzed about it and I would like to get some.

Tom OHern
Posts: 236
Location: Seattle, WA
12
posted 9 years ago
Are you talking about using shower and sink water for a greywater system? Any more specifics about what you think this was about would be helpful in tracking down the info.
brett watson
Posts: 100
Location: Northern California Zone 8b
1
posted 9 years ago
oh yeah, I have to remember that y'all can't hear those voices in my head. Sorry about that.
Anyway it was a device that goes in the drain and catches all the hair, food, guck, muck, etc.

posted 9 years ago
A sink strainer? It's a mesh drain cover that does exactly what you said.

Paul Pittman
Posts: 16
Location: Midwest - Zone 5B
11
8
posted 9 years ago
I think you may be thinking of these?

posted 9 years ago
Yup, William is right, it is a Zip-It, though here's a link for just one Zip-It instead of twelve.

Paul gave me one and it works quite well. The only place it does does not work would be those unusual drains that do not have any places that catch hair and gunk within its 23" reach - I've run across a couple drains like that recently.

posted 8 years ago
Just bought the zip-it to fix the kitchen sink that was clogged. Didn't work... I then discovered that the problem is much bigger than I initially thought. I had to take apart most of the plumbing under the sink and will probably need an auger to unclog...

I then tried it on the washroom sink and it worked really well. Now that sink is not slow anymore and no harmful chemicals were used, yay!
R Scott
pollinator
Posts: 3794
Location: Kansas Zone 6a
192
posted 8 years ago
They work great for hairballs. Lye still works best for grease. I don't consider making soap in the drain to be toxic, or the least toxic way to deal with it.

Morgan Morrigan
Posts: 1400
Location: Verde Valley, AZ.
posted 8 years ago
hydrogen peroxide is what they use to clear sewer lines of biofilms. and a physical scraper...

Get involved -Take away the standing of corporations MovetoAmmend.org

that is a dilute solution of sodium hydroxide. Which is Lye. Best thing on fats.

posted 8 years ago
Would the lye (hot water and wood ashes) be safe for plumbing?

Lye treatment is the oldest trick in the book.
It can damage old cast iron drains, but they're a time bomb anyway. Most drain pipes are now plastics that can withstand the treatment. Lye is the chief active ingredient in Drano, a popular drain cleaner. With many drain cleaners you get a bunch of other chemicals that can ruin the graywater. Wood ash is used in the garden and will only cause a slight increase in alkalinity in waste water. The other stuff in ashes are things like calcium, iron, magnesium etc. that nourished the trees. They won't hurt a thing.

My grandmother was constantly draining greasy things into her sink in her later years. She had moved to the city and never would have done it when she had a septic tank. Whenever I visited, I did the ash thing. Things would totally plug, if left for a couple months. Hard to get going again. My preemptive treatments were easy.
1. Eat greasy food. (she never got fat)

2. Boil a giant pot of water for tea. Dump ashes in and drain kettle on top of them.

3. Explain to gramma for the hundredth time that she has to leave the dishes until the ash does it's magic. Watch Tommy Hunter (a country singer with a TV show) or watch some blubbering fool TV preacher. Mesmerized, she'd leave the sink alone for an hour.

4. Boil a big pot of water and dump it down the drain. Soap created in the S trap washes over all of the grease which coats the lower pipes. Done

This worked for years. I hogged down lots of greasy food, had tea, did drains, listened to more than enough banjo music and enjoyed mocking every TV preacher that came along.

posted 7 years ago
I have a power auger and a distrust of chemicals,but a cheaper version might be a length of braided steel cable chucked into a drill.

posted 7 years ago
Back when I was working at a research lab, I picked up a 1 kg container container of reagent grade sodium hydroxide pellets that were getting thrown out because they had been in the lab for too long. That worked wonderfully for cleaning out drains. Sure it was corrosive as can be, but breaks down into salt water.

For larger clogs, drill mounted augers really are the way to go.

Troy Rhodes
Posts: 632
28
posted 7 years ago
Even a cheap hand auger will often fix/remove problems in the first 6-10 feet of the drain. The big box stores carry them.

You turn it CLOCKWISE when you're going in, so the business end screws itself past corners, and through the clog. Then you drag it out.

You might need to turn it counterclockwise to drag it out past some tight corner.


Here's an amazon example just so you can see what they look like.


The next step up from there is more or less the same thing, but you chuck it in a drill.

posted 6 years ago
The master bathroom sink and shower slowed draining at about the same time.

My first thought was to pour draino or draino like stuff in there. But I knew that was bad. Not only an extreme violation of my standards, but what does that stuff do to the critters in the septic tank? And then I started thinking about the drain auger .... where is that? And then I thought of using the plunger. So I tried the plunger on the shower drain and just managed to dredge up ugly stuff and it seems to have made the problem worse. I started to think about how I could take the P-trap apart on the sink, but that definitely won't work on the shower.

Then Jocelyn reminded me of the zip tool. I have no idea why I didn't think of that first. Every time I've used it in the past it worked a hundred times better than anything else. It took about a minute on the sink and two minutes on the shower. I was amazed at how little was down there plugging everything up.

I think the important thing I want pass on is two fold:

1) The bathroom sink stopper appears to now be something that you don't pull out (you used to be able to just pull it out). I spent a fair bit of time trying to figure out how to get it out of there. Then I just tried to work the zip tool in there while leaving that whole plug-mechanism-stuff in. In a minute I was done.

2) The shower drain grate had a notch in the middle that looked like a place where you put a screwdriver head. Okay - unscrew the drain cap. In about two seconds I turned that notch into an ugly hole. Okay, that was some sort of weird decorative notch and the drain cap must be cemented in place. The zip got hung up on the drain slots a lot - so it slowed me down, but I did manage to get some gross stuff out.

So, today's lesson is, don't try to remove any of the hardware, just work the zip tool around the existing hardware.

The high note is that I was prepared to spend a few hours on this today, but it was totally solved in just a few minutes. I'm hoping that by writing this down here, the zip tool will always be my first thought for this sort of thing. And I will burn less time trying to fiddle with removing hardware at the drain point.

posted 6 years ago
Here's a pic of what this $5 (average price) tool looks like. Plus a repeat of the affiliate link for the zip-it tool if you wish to buy it. 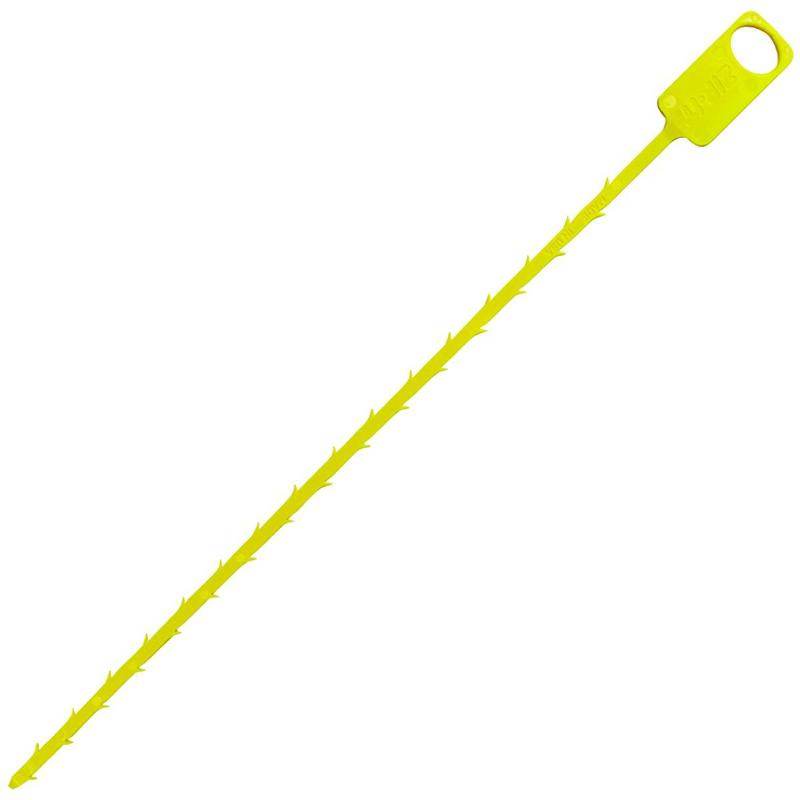 Lj Jane
Posts: 8
posted 6 years ago
I bought one about a year ago on Amazon and it works great for the bathroom sink and so so for the tub just because of the angle of the pipe... I used it weekly!