posted 6 months ago
Super capacitor power storage used to be a thing of the future and often under the control of the evil mastermind. And in comics at that. They are now available instead of batteries, lighter, cheaper and have considerably better discharge recharge profile. Are they only good?  Below is an introduction in Physics. Org:

For my money 💰 it is worth considering particularly if you are considering the potential toxicity of conventional batteries.
Oftentimes people such as those who subscribe to Permies.com have the evidence long before the science catches up.

Failure is a stepping stone to success. Failing is not quitting - Stopping trying is

posted 6 months ago
My understanding is that they cannot come close to matching the energy density of battery tech at present, which makes them a non-starter for most applications. When I used capacitors to make a Tesla coil (lightning generator), I was more scared of the capacitors than any other part of the system. A short circuit will fully discharge a huge amount of energy in an instant - potentially a lethal discharge from something equivalent to a small battery in terms of total energy stored.

posted 6 months ago
Another big problem is self-discharge. After a few days a supercapacitor will still have enough juice to kill but not enough to do anything useful.

posted 6 months ago
I have been using them for a few years.  Well built ones don't self discharge fast.  I have one that I have been testing.  It was charged to 13.5v 2 months ago and is sitting at 12.1 today.  For the lower voltage dc application they are great.  I just did one using a Maxwell 48v nominal combined with a 1050 ah battery system.  This capacitor will give out 2000 amps in a second.  This gives the big batteries time to chemically move.  In an industrial setting they have changed the world on being able to switch power sources back and forth rapidly.  I have used 58f at 16.2v ones on 3 12v systems to make sure I get enough amps to fire up an inverter.  Here is a picture of one that I have been testing, because I can't get maxwells anymore.  I have a small 24v one to put on a friends power system to help keep the generator from cycling every time he fires up a saw.  The last of my maxwells.

Edit:  These capacitors are charged with special equipment (a home made choke) I have come up with.  If you just hook a dead capacitor up to a battery it will usually burn the wire in two.  Most battery chargers will just kick off, because it looks like a dead short to the charger.  The danger is they will give you full amps out when asked for.  This burns things quickly, but don't hurt the capacitor.  Another thing is to never take them above rated voltage or they will let their smoke out with a bang. 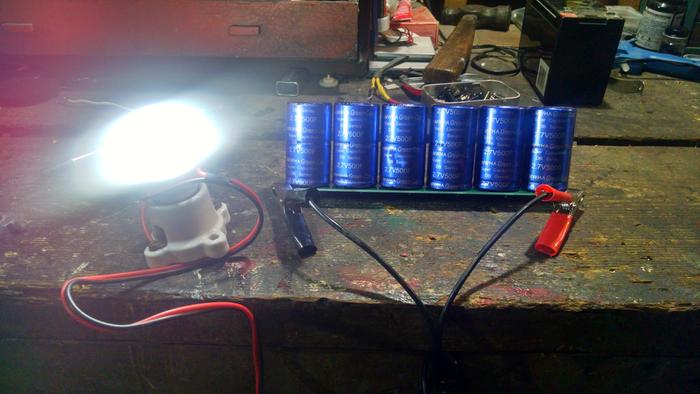 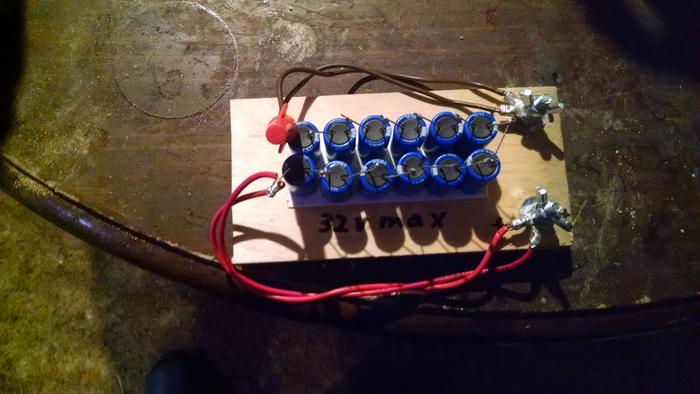 posted 6 months ago
I think the technology has great promise. There are already some useful commercial applications. It doesn't seem quite ready for prime time permie-ing though. I don't believe it's as toxic as batteries but capacitor manufacturing is still toxic & not environmentally friendly.

THIS!!! A capacitor discharges at the rate of 63.2% in one RC time constant. Then the remaining 63.2% in the next time constant. etc ... Resistance times Capacitance. Accidentally shorting a capacitor out results in a huge almost instantaneous dump of electrons since there is virtually no resistance with a direct short. The math gets ugly, sparks fly, wires melt, & it kills people.

I do want to address the high voltage part:
Operating voltage is a design parameter that can be varied from low voltages totally safe to touch both poles at the same time (say 48V as the upper limit) at the cost of thick wires to carry the current needed, to high voltage (500V or higher that can be lethal) but with much thinner wires (and/or less losses).

A single super capacitor has a maximum voltage of around 3V, so small (up to 16 in series) capacitor banks will inherently be safe (at least voltage wise).

The burn risk is definitely something to consider before shorting them out, but the same applies to batteries (just that that you need a bit more battery for the same effect).
Tony Hawkins
Posts: 65
3
posted 3 months ago
They have lower energy density and that can be a problem in space constrained areas (like cars, boats, etc). But for a terrestial ranch-type application or even a modest home, does it really matter if they're 10x the size?

I'm more interested in longevity and reducing the lithium usage. My understanding is that capacitors will function at rated performance for decades if not centuries.
S Bengi
pollinator
Posts: 3378
Location: Massachusetts, Zone:6/7 AHS:4 GDD:3000 Rainfall:48in even Soil:SandyLoam pH6 Flat
413
2
I like...

Supercapacitors do have a 10% discharge rate per day too, so if you put supply 100AH of energy only 100Ah gets stored, and by tomorrow only 90AH is left in the supercapacitor battery.

Kelly Craig
Posts: 14
1
posted 1 week ago
I've been building DC power supplies for treadmill motors. They run at up to ninety volts and ten amps. To smooth the circuits, I used a cap rated for voltage higher than it will be subjected to in the circuit.

These are simple supplies and the last thing I want to do is build a fancy circuit to drain the cap when there is no load on it. However, the meter shows it can take a day or so for the power to drain off, if no attempt is made to remove it.

To solve the problem, I use double pole, double throw [DPDT] switches to power the supply on and off. These have no center off position. It's on and on for two circuits.  I use one side of the switch to feed the supply. The other side, opposite the supply side, is used to short the cap via a ten watt, 500 ohm resistor.

A meter shows the cap drains in mere seconds.

James Alun wrote:Another big problem is self-discharge. After a few days a supercapacitor will still have enough juice to kill but not enough to do anything useful.

posted 1 week ago
That is called bleeder resistor. It is a common safety feature of power supplies. There is no need to wire it through a switch but you would probably need a much higher value resistor to avoid loading the power supply down.

Kelly Craig
Posts: 14
1
posted 1 week ago
Yes, it is a bleed resistor, but I had to install it, since I built the supply. And if I didn't run it through a switch, as described, it would, as you note, load the supply.  As it is, flipping the toggle to the other on, used to shut the power off and discharge the cap, works fine.

If you see an actual problem with this method, it would be helpful to hear your explanation.

When I worked for the Navy (Naval Undersea Warefare Engineering Station, Keyport, Washington) in a civilian capacity, the engineers had me build a capacitor forming device for the Mark 53 attack console capacitors used to fire the flash tubes. They held 10,000 volts, so would get your attention, or worse, if you grabbed one with a charge still on it.

To discharge the caps, after each charge cycle, I used a micro switch, to connect the caps to ground, prior to the the next charge cycle. I, also, added a switch to the door, so opening it would discharge the caps.  One of the engineers removed the interlock. It put him in the hospital. He asked me to install it back on the circuit after that.

In short, a switch worked fine for these purposes.  Of course, since I was working with engineers, I should have made it more complicated. No?

Mike Barkley wrote:That is called bleeder resistor. It is a common safety feature of power supplies. There is no need to wire it through a switch but you would probably need a much higher value resistor to avoid loading the power supply down.

posted 1 week ago
I think simple is best. With the resistor soldered directly across the capacitor there is no chance of switch failure or extra wires breaking which would prevent the cap from discharging when the unit is turned off. Like you said ... they can sure get someone's attention! If the bleed resistor is considerably higher resistance/impedance than the desired load the negative effects on the circuit should be minimal. From a manufacturing viewpoint simpler is cheaper & easier to maintain. With a custom supply that probably only you will ever open that isn't much of a concern since you're fully aware of the dangers.

Kelly Craig
Posts: 14
1
posted 1 week ago
For whatever reason, my response didn't post.  Here is a variation of it:


Decades back, I worked in the television repair business, before everything became disposable.  It was the shop's practice, law even, the cathode ray tube circuit got drained off by way of a probe to ground.  The probe was very well insulated, to withstand the thousands of volts it might encounter, and had a resistance, so you were not just shorting things out, which could damage some components.

Discharging capacitors is a common practice and is done regardless of it the circuit has a bleeder resistor.  Reasons include, but may not be limited to, that bleeder resistors fail, or just take too long to bleed a circuit down.

Essentially, my simple circuit to drain off power is just a built in version of a probe described above, but yes, it can fail just like bleeder resistors and other components do.

I guess we could swap the resistor for a bulb, which would light up while power is on the circuit, the fade to off, as power drains.  We could go redundant (two bulbs) to increase the chance of avoiding a failure that would leave power on the circuit.  We could work in an inductor to liven things up too.

posted 1 week ago
Is there such a thing as a charge controller that knows about super capacitors?

The system I'm picturing is to have enough supercaps to cover you through the average night, then chemical batteries to cover longer-term outages.

Charge controller's logic would be to first and foremost keep the chemical batteries topped off so they don't get damaged, then store everything else in the supercaps.