What do you think about adding a Kickstarter icon/badge

posted 1 month ago
Paul and I have been talking about an idea.  On the left below your name is often a little icon showing how many apples you've earned and if you have pie.  We're thinking about adding an icon that would appear if you've supported a kickstarter.  After the second kickstarter it might show a little 2 on the K.

This would be a little way to show that you've supported the "permies empire" for X campaigns.  And a very tiny incentive to throw a dollar in the hat.

We're currently thinking it would appear for contributions of $1 or more.

Is this the best idea ever?  Worst?  Ideas to make it even better?

You should never forget that every creature has its purpose in the cycle of nature and can also be very important to humans. Sepp Holzer's Permaculture

posted 2 weeks ago
I see the new badge, woohoo!
Now for the ???
So what happens if you supported one of Paul's Kickstarters, but it isn't showing up?  I've supported 2 past Kickstarters but I only see 1.

posted 2 weeks ago
Well, the good news is that the permies software can display the K for all of the kickstarters.  The bad news is that Paul personally has to fiddle and fart around with the emails to make it work.  So I think they will slowly get added as his schedule allows

posted 2 weeks ago
It looks like, so far, Paul has gotten the four most recent kickstarters (wofati greenhouse film, Building a Better World book, and Rocket Ovens film, and 177 hours of PDC and ATC video) added to the system. So, maybe you supported one of the earlier kickstarters?

If you hover anyone's K, it'll tell you which kickstarters supported, even if they (like me) might have only supported at the $1 level.

posted 1 week ago
So I went on Kickstarter and I see that I've supported 3 of Paul's kickstarters so far:
1. The SKIP book - which is pending so I understand why that one isn't showing up
2. Rocket Mass Heaters (not showing up)
3. Truly Passive Greenhouse (this is showing up)

Maybe I used a different email address for the Rocket Mass Heaters one.  I don't recall.
KickstarterBadges.jpg 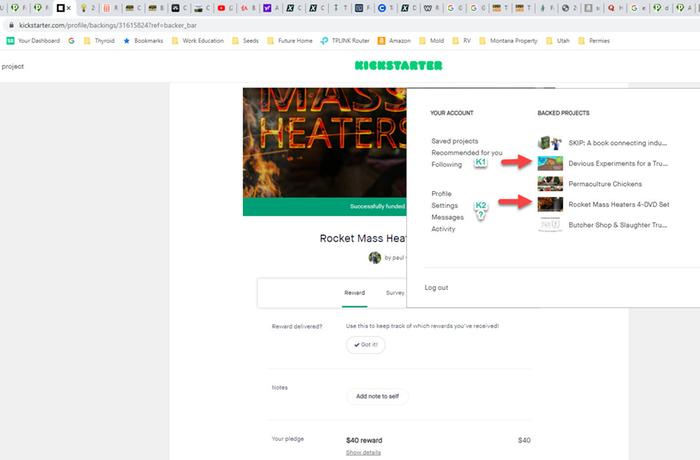 If you see a RMH kickstarted listed under my K (or anyone else's), but not under your K, then I think it's time to worry.

posted 1 week ago
Yep, I didn't pay close enough attention to what was posted before.  I mistook Rocket Ovens for Rocket Mass Heaters kickstarters, thinking it should be showing up.  I'll give it all more time. Thanks for the info!

and maybe my K can have a corrected number  please : )

posted 1 week ago
Paul's working on them.  It takes quite a while to get all the emails from kickstarter and run them through the program to add another one to the "K" system.