a few photos of some food forest areas around my property

Brenda Groth
pollinator
Posts: 4437
Location: North Central Michigan
29
posted 10 years ago
We are now 10 years after our housefire and we are starting to get the food forests re established around the property. I didn't on purpose take a lot of photos of the individual trees but there are a few shots of food forests that are now establishing in my newest post to my blog if any one is interested. here is the link: 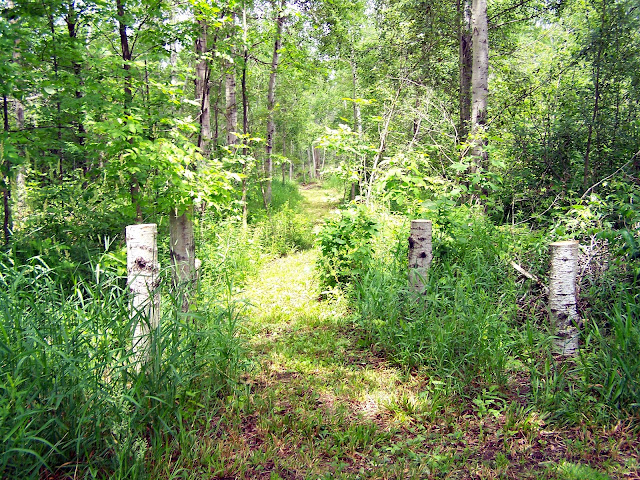 I don't plant things generally in their own gardens, but I tend to plant mixed beds of trees, shrubs, perennials, annuals, vines, etc. all over the property, on the fencelines, in large groups in the middle of the yards, in the areas around the house and around the drainfield, around the pond, in an old garden area that I'm reclaiming in the back yard, and also now starting to plant food plants in the edges and along the trails in the woods.

some other threads on the blog also have photos from the past few years of getting these new areas started..and they have a long way to go.

posted 10 years ago
really nice job Brenda! Thank you for sharing with us!

I really like the meandering paths, with great edges.
The mushroom logs seem like such a practical border. Out of the way, but along the way.

Whenever I see a pond like that, I think to myself "Hmm. I need some wild rice."
One pound from the health store should last me a lifetime.

Keep up the good work.

paul sanass
Posts: 16
posted 10 years ago
Sorry to hear about the misfortune you've had ... but it hasn't held you back, I really hope someday to have a forest that looks as good as yours, we're in the UK but looking at the USA and France for one final move ... if only we could find that wee place, Good Luck.
Mitsy McGoo
Posts: 22
Location: zone 6b in upper east Tennessee
posted 10 years ago
Wow, that is really beautiful! In terms of where your plants have come from, have you mostly purchased them (and then divided them if perennials), started from seed, or been gifted plants from neighbor gardens? My garden is a mixture of store-bought plants and cuttings/divisions pilfered from neighbors (with permission of course) that I know will grow great since the conditions are essentially the same, but it's nowhere near the size/extent of yours. Your grounds seem somewhat wild but in an organized and tidy kind of way. I don't see one bare patch of dirt. Do you mulch? Are some of the garden areas in mounds? Do you irrigate or just let things fend for themselves?

Brenda Groth
pollinator
Posts: 4437
Location: North Central Michigan
29
posted 10 years ago
Mitsy (my cat's name is Mitsy)...all of the above.

We have lived here 41 years and over the years we have bought, dug from the wild, gotten from neighbors, took cuttings, divided and grown from seed. When lightening struck our 100 year old victorian home and it burned, we had it removed and we had to remove a lot of our gardens (we had established food forest gardens that had to be moved) and tried to move a lot of semi adult trees, only one suvived the move. Our front property line trees and our rear woods and a few other trees survived, but pretty much everything else has been planted since 2002. Also our son requested some land from us for a home so another area was cleared for his home in 2006, which also removed a lot of trees. We were sad but then realized we were infected with emerald ash borers, and we would have lost them all anyway.

The area around our house is a raised area, 4' of fill around our home and around our drainfield. So yes there are some mounded areas. Our fill was removed where our pond is now. That was a low spot behind our house. Where our nursery food forest is right now, a baby garden, there was an old overworked seriously destroyed garden plot that we have just decided recently to try to repurpose. That was an overtilled compacted area of poor soil, where things had been burned in the past. Very alkaline.

We began replanting in 2003 after our house was replaced and all the contracting work was done. I only had a few adult apple trees as far as fruit trees, and one crabapple survived the move, but all the rest have been planted since. I can only afford to buy so many a year, so I try to buy the ones I can and then divide and take cuttings, etc..to get the rest.

Some of the beds now have some wood buried in them, but I haven't really made any tall hugelkulture beds, maybe I will some day. We have been burying logs from time to time to see how it helps the beds, and in the woods area alot of trees were pushed down and buried. I do have some drip systems here and there but try not to use them very often. I also have a drip system in my greenhouse. As for mulch, I do try to mulch new planting areas as I am able, but mos tof the gardens are self mulching and self fertilizing at this point. Only the new areas are irrigated or mulched when needed, but other areas mulch themselves. And yes it does look a little wild as we do have a quackgrass problem, which tends to take over everything. We try to use a lot of ground covers to eleminate the quckgrass but it is a never ending battle and having a physically and mentally disabled husband, it is very difficult for me to keep up with all the weeding..so it gets the upper hand. Thanks for the nice comments everyone.

Dale Hodgins
Posts: 9002
Location: Victoria British Columbia-Canada
695
posted 10 years ago
All of your various zones remind me of the garden rooms that are often extolled in fancy gardening magazines. Often theirs look contrived compared to what you're doing as you work with what nature has provided. Have you created seating and viewing areas along your many paths ?
Kevin MacBearach
Posts: 213
Location: Beavercreek, Oregon
2
posted 10 years ago
I'm curious to know how you sealed your pond.

Andy Sprinkle
Posts: 46
Location: Lexington, Kentucky Zone 6
posted 10 years ago
Your property is beautiful! I imagine it most be amazing to stroll around the yard and through the forests on a nice Michigan summer day...and sit and relax around the pond during the evening. Brenda...you are producing an environment that is equally productive and beautiful!
Brenda Groth
pollinator
Posts: 4437
Location: North Central Michigan
29
posted 10 years ago
Yes there are several areas to sit down (i am partially disabled and do need to sit from time to time, sometimes I'll even carry a resin chair out in the woods with me to get a place to sit)..

In the front yard I have a metal gazebo with a wooden deck with the 100 year old seedy grapevines over it, pruned those back hard this year but they'll entirely cover the area by the end of summer. I have a front porch and side and back decks as well as a far back deck under our apple tree with seating. I have a swing in my baby garden I'm reclaliming, and a swing by the NW corner of the pond where the wildlife is easiest to watch. I have 3 benches made of telephone poles around the pond and on the island and another hunk of telephone pole I will make into a bench yet. And of course the lightweight chairs I can haul all over the place.

My gardens may be a bit contrived, but gone wild..I do admit I am kinda hooked on flowers so I plant a lot of them ..but also a lot of them are edible or have other uses besides pretty. All of them will draw pollinators in as well.

As for the pond, it isn't sealed..it has a natural clay bottom as our property is clay and it is fed from rain and groundwater and seep springs..the water level will vary with the rain and the drought. It has some very deep areas that never go dry, but the very shallow areas will sometimes go dry in droughty times.

Julie Carney
Posts: 76
Location: Silicon Valley
1
2
posted 9 years ago
I love your property ......It's wonderful to see the rich results of persistent work over the years.....
We are just starting out, and have trouble deciding just what to plant where...And when.... I love the way you have everything growing together.........
I also admire the fact that you have not given up - even with the physical challenges.....
Beautiful blog! Thanks for sharing!