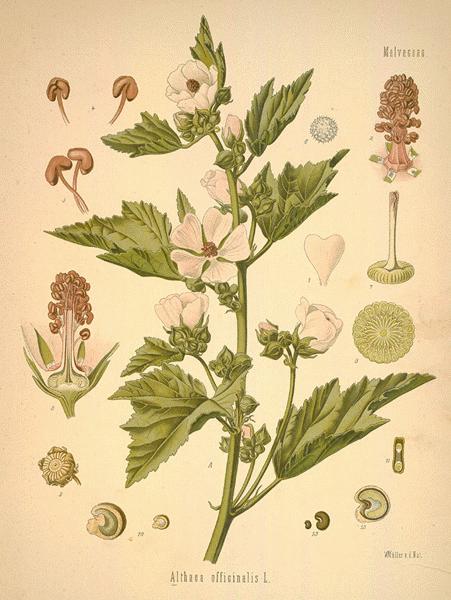 I would guess that medicinal herb that most people have heard of would be Marsh Mallow.  Even Culpepper wrote, “Common mallows are generally so well known that they need no description.”, but that was in 1652….. I think we must assume now that most folks probably  think of the artificially, fluffy confection called marshmallow.  The original confection was made with the Mallow plant, but unfortunately, now they are essentially just puffed sugar and gelatin.  The actual herbs of the Mallow family can be nearly miraculous in their effect and should be on hand in any herbal first aid kit.


For a change from my normal method of discussing herbs, I begin by referencing a couple of modern herbalists.  The first is Doctor Patrick Jones. “Doc Jones”, as he is affectionately known on The Grow Network (everyone’s favorite herbal instructor), recommends Mallow in all cases of trauma to external tissue and irritation of the digestive tract.  He even uses Mallow in treating wounds that are beginning to turn gangrenous in his veterinary practice!


A book I hesitated to purchase for a time due to the title, is The Lost Book of Herbal Remedies, by Nicole Apelian, PhD and Claude Davis… well, as they say, you can’t judge a book by its cover (or title, as it is actually a handsome book).  I finally got a copy and it is really, very good!  The info is solid, the layout is convenient and the photos are quite nice.  The Lost Book lists Marsh Mallow as being good for:


Acid Indigestion, Peptic Ulcers, Leaky Gut, and Digestive Issues: I use the root of the marshmallow plant to treat stomach problems caused by excess stomach acid and for Leaky Gut. It is effective in neutralizing the acid and relieving symptoms. The root has a moderate laxative effect, which makes it useful in treating intestinal problems such as colitis, ileitis, irritable bowel syndrome, and diverticulitis. I also use it as an ingredient in my Leaky Gut Blend as it forms a protective layer around perforations in the gut.


Dry Coughs, Bronchitis, Bronchial Asthma, Congestion, and Pleurisy: Because marshmallow is so good at treating the membranes, it makes a good antidote for respiratory problems. It relieves the swelling and irritation of the mucous membrane and calms the respiratory system. It is not an expectorant.


It also lists the herb as useful for teething pain, skin irritations, inflammations and swellings, skin ulcers, injuries and for removing foreign objects.


Medicinal use of Marsh Mallow: Marsh mallow is a very useful household medicinal herb. Its soothing demulcent properties make it very effective in treating inflammations and irritations of the mucous membranes such as the alimentary canal, the urinary and the respiratory organs. The root counters excess stomach acid, peptic ulceration and gastritis. It is also applied externally to bruises, sprains, aching muscles, insect bites, skin inflammations, splinters etc. The whole plant, but especially the root, is antitussive, demulcent, diuretic, highly emollient, slightly laxative and odontalgic. An infusion of the leaves is used to treat cystitis and frequent urination. The leaves are harvested in August when the plant is just coming into flower and can be dried for later use. The root can be used in an ointment for treating boils and abscesses. The root is best harvested in the autumn, preferably from 2 year old plants, and is dried for later use.

Now, for the historical references my readers tell me they love as much as I!

Horace and Martial mention the laxative properties of the Marsh Mallow leaves and root, and Virgil tells us of the fondness of goats for the foliage of the Mallow.

Dioscorides extols it as a remedy, and in ancient days it was not only valued as a medicine, but was used, especially the Musk Mallow, to decorate the graves of friends.

Pliny said: 'Whosoever shall take a spoonful of the Mallows shall that day be free from all diseases that may come to him.' All Mallows contain abundant mucilage, and the Arab physicians in early times used the leaves as a poultice to suppress inflammation.

Preparations of Marsh Mallow, on account of their soothing qualities, are still much used by country people for inflammation, outwardly and inwardly, and are used for lozenge-making. French druggists and English sweetmeat-makers prepare a confectionary paste (Pâét‚ de Guimauve) from the roots of Marsh Mallow, which is emollient and soothing to a sore chest, and valuable in coughs and hoarseness. The 'Marsh Mallows' usually sold by confectioners here are a mixture of flour, gum, egg-albumin, etc., and contain no mallow.

In France, the young tops and tender leaves of Marsh Mallow are eaten uncooked, in spring salads, for their property in stimulating the kidneys, a syrup being made from the roots for the same purpose.


Government and virtues. Venus owns them both. The leaves of either of the sorts, both specified, and the roots also boiled in wine or water, or in broth with Parsley or Fennel roots, do help to open the body, and are very convenient in hot agues, or other distempers of the body, to apply the leaves so boiled warm to the belly. It not only voids hot, choleric, and other offensive humours, but eases the pains and torments of the belly coming thereby; and are therefore used in all clysters conducing to those purposes. The same used by nurses procures them store of milk. The decoction of the seed of any of the common Mallows made in milk or wine, doth marvellously help excoriations, the phthisic pleurisy, and other diseases of the chest and lungs, that proceed of hot causes, if it be continued taking for some time together. The leaves and roots work the same effects. They help much also in the excoriations of the bowels, and hardness of the mother, and in all hot and sharp diseases thereof. The juice drank in wine, or the decoction of them therein, do help women to a speedy and easy delivery. Pliny saith, that whosoever takes a spoonful of any of the Mallows, shall that day be free from all diseases that may come unto him; and that it is especially good for the falling-sickness. The syrup also and conserve made of the flowers, are very effectual for the same diseases, and to open the body, being costive. The leaves bruised, and laid to the eyes with a little honey, take away the imposthumations of them. The leaves bruised or rubbed upon any place stung with bees, wasps, or the like, presently take away the pain, redness, and swelling that rise thereupon. And Dioscorides saith, The decoction of the roots and leaves helps all sorts of poison, so as the poison be presently voided by vomit. A poultice made of the leaves boiled and bruised, with some bean or barley flower, and oil of Roses added, is an especial remedy against all hard tumours and inflammations, or imposthumes, or swellings of the privities, and other parts, and eases the pains of them; as also against the hardness of the liver or spleen, being applied to the places. The juice of Mallows boiled in old oil and applied, takes away all roughness of the skin, as also the scurf, dandriff, or dry scabs in the head, or other parts, if they be anointed therewith, or washed with the decoction, and preserves the hair from falling off. It is also effectual against scaldings and burnings, St. Anthony's fire, and all other hot, red, and painful swellings in any part of the body. The flowers boiled in oil or water (as every one is disposed) whereunto a little honey and allum is put, is an excellent gargle to wash, cleanse or heal any sore mouth or throat in a short space. If the feet be bathed or washed with the decoction of the leaves, roots, and flowers, it helps much the defluxions of rheum from the head; if the head be washed therewith, it stays the falling and shedding of the hair. The green leaves (saith Pliny) beaten with nitre, and applied, draw out thorn or prickles in the flesh.


The marshmallows are more effectual in all the diseases before mentioned. The leaves are likewise used to loosen the belly gently, and in decoctions or clysters to ease all pains of the body, opening the strait passages, and making them slippery, whereby the stone may descend the more easily and without pain, out of the reins, kidneys, and bladder, and to ease the torturing pains thereof. But the roots are of more special use for those purposes, as well for coughs, hoarseness, shortness of breath and wheezings, being boiled in wine, or honeyed water, and drank. The roots and seeds hereof boiled in wine or water.


Saint Hildegard wrote in Physica, “Marshmallow… prevails against fevers.  If a person has fevers of any kind, he should pour marshmallow into vinegar and drink it in the morning on an empty stomach, and at night.  The fever, whatever its nature, will cease.  A person who has pain in his head should crush marshmallow with a bit less sage and mix it in a little olive oil.  He should warm it in his hand, near the fire, and place it on his forehead.  He should tie it on with a cloth, and go to bed, and he will do better.”


In regard to the food value of Marsh Mallow, it is worth noting that Euell Gibbons enjoyed the roots boiled, then fried, with butter and onions.  He was also able to whip the mucilaginous “slime” left in the boiling water into a substitute for egg whites.


Rosalee de la Forêt has a recipe for real Marshmallow candies made with real Marsh Mallow… and I have to say that even for a guy like me who doesn’t have much of a sweet tooth, these look really good!  I would dip them in dark chocolate. learningherbs.com/remedies-recipes/how-to-make-marshmallows/

posted 9 months ago
nice, i have a fondness for the mallow family, its a very useful and beautiful family of plants. one of my preferred wild edibles is the wild "cheese" mallow, malva neglecta. seen it all over the country, its really everywhere, and i find the taste of the leaves to be great in anything you want greens for.

also like the pretty side of the family, rose of sharon, hollyhocks and hibiscus, and the even the musk mallows and semi wild ish malva sylvestris - zebrina mallows.... just for beauty's sake, bonus-  they all have edible flowers.

Judson Carroll
pollinator
Posts: 385
107
posted 9 months ago
I agree!  I'm looking forward to trying Euell Gibbons' recipe - I had totally forgotten that one and found it again in my old copy of Stalking the Healthful Herbs.  Now, I'm wondering how it may work in place of okra in gumbo!