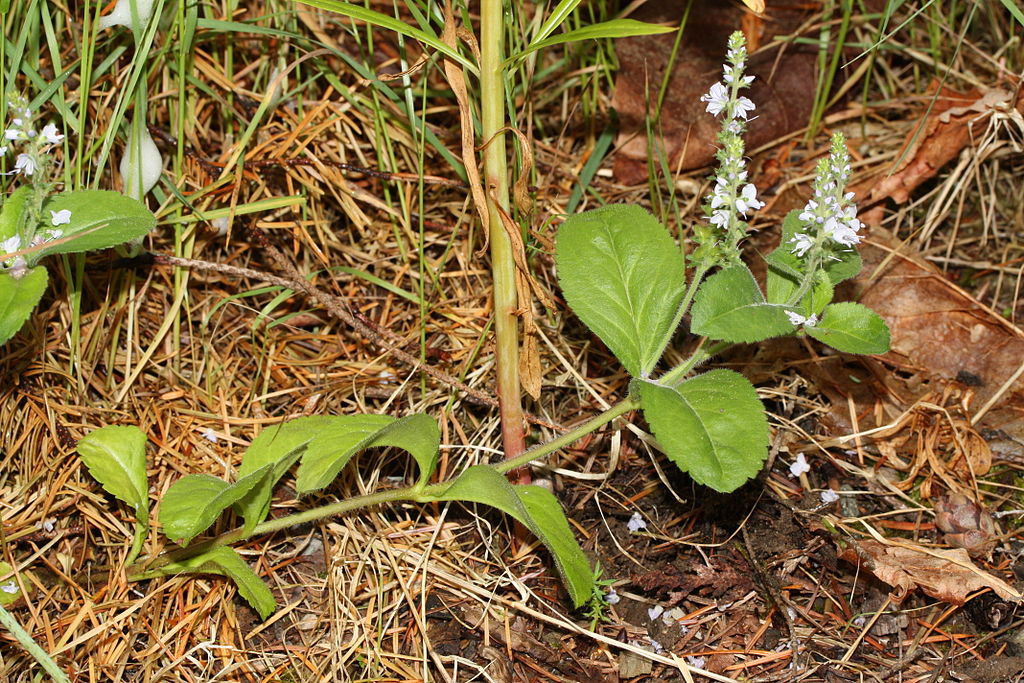 Occasionally, one runs across a common and useful herb that has, for reasons unknown, fallen out of use.  Such was the case last week, when a friend on MeWe asked about uses for Speedwell, Veronica officinalis. I knew this to have been an herb often mentioned in the old herbals and as an ingredient in the Great Swedish Bitters.  The name, “officinalis” means that it was included among the pharmacopoeia of medieval medicine, meaning, “of the officina”, where the medicinal herbs were prepared and stored in the monasteries which were the doctor’s offices and hospitals of the time.  When Lineaus formalized the Latin naming of plants, he used the term to indicate an herb commonly used medicinally and listed in the pharmacopoeia of the European traditions of herbal medicine.  However, Speedwell was not an herb with which I had much first hand experience.


I turned to my herbal library, but was unable to find even a mention of Speedwell in any of a dozen or so modern herbals.  The most recent listings for its use that I could find were written in the 1970s.  A brief mention in The Rodale Herb Book states that Speedwell is, “A tonic, alterative and diuretic, it is used in coughs, catarrh and for skin diseases.”


When the Romans conquered Germanic lands, they learned from the old Teutons about the great value of this much esteemed herb. The Romans, as I read in an old herbal, must have been convinced of this herb's great value. If they wanted to compliment an acquaintance of a friend, they said he had as many good qualities as the highly esteemed Speedwell.

This saying I remembered, when one day a gentleman told me of the high cholesterol level in his blood. He had been to hospital several times. I recommended Speedwell, two cups per day. My pleasure was great when, six months later he told me the doctors were surprised there was no high level of cholesterol, when shortly ago they gave him a check-up.

This traditional herb is a favorite addition to teas that cleanse the blood and, together with fresh Stinging Nettle tops, it heals chronic eczema. It is especially recommended for senile purities. Weak people tolerate it as a stomachic of gentle action which also stimulates digestion. Fluids and mucus in the stomach and intestinal disorders are eliminated.

Speedwell is efficacious for old, dry bronchitis. For chest complaints, a tea is made from an equal proportions mixture of Lungwort (Pulmonaria officinalis), Coltsfoot, Plantain and Speedwell, sweetened with honey or raw sugar.

I would like to point out that Speedwell has a great medicinal value for nervousness caused by mental over exertion. One cup drunk before going to bed, through its soothing effect, is highly beneficial. The Abbé Kuenzle recommends this soothing tea to people who have to work a lot with their head. It brings I good memory and disperses dizziness. Mixed with Celery roots it rectifies weak nerves as well as depression. Even for jaundice and gravel in the bladder, rheumatic and gout pain in the limbs, Speedwell is very effective.

A priest relates: “My memory lapses disappeared surprisingly after drinking tea, prepared of equal amounts of Speedwell and Horsetail (2 cups per day). I had become uncertain and worried, when during sermons I forgot important words. The herbs have helped very quickly.”

The fresh juice prepared from the flowering plant, is recommended for chronic skin disorders, especially for eczema (see “directions”). One teaspoonful of the juice is taken 3 times a day. I recommend Speedwell, in old herbals praised as a wound-herb, for all inflamed, non-healing wounds, especially wounds near the shinbone. The wound is washed with a decoction of Speedwell and then compresses made from the freshly prepared infusion are applied, wrapped up warmly and left on overnight.

People who suffer from rheumatism and gout should try the easily prepared Speedwell tincture (see “directions”). This tincture is used externally as a friction; internally 15 drops in water or tea are taken three times a day.

Be sure to drink a tea prepared from the freshly picked herb for a period every year! Speedwell not only prevents arteriosclerosis, it gives the body new elasticity through its purifying action. Therefore my request: Take my advice!


Yet, my regular “go to website” for quick herbal reference (Natural Medicinal Herbs) states plainly, “The leaves and roots are alterative, astringent, mildly diuretic, mildly expectorant, stomachic and tonic. They have been employed in the treatment of pectoral and nephritic complaints, haemorrhages, skin diseases and the treatment of wounds, though the plant is considered to be obsolete in modern herbalism.”


The Physician’s Desk Reference for Herbal Medicine lists Speedwell as effective in the treatment of ulcers and wounds.  Under Unproven Uses, it states, “ Speedwell preparations are used for diseases and discomfort of the respiratory, gastrointestinal and lower urinary tracts.  It is also used for the liver and kidneys, and to treat gout and rheumatic complaints.  In addition, Speedwell is used internally to improve metabolism, “blood purifying” and for nervous agitation.  Externally, the herb is used as a gargle for inflammation of the oral and pharyngeal mucosa, promotion of wound healing, chronic skin complaints, itching and sweating of the feet.” “No health hazards or side effects are known in conjunction with proper administration of designated therapeutic dosages.”


So, I was left to ponder why such a useful and safe herb fell out of use. If as Mrs. Treben said, Speedwell came into use by Rome through the Germanic tradition, perhaps the answer could be found in the old English herbals since so much of their tradition was derived from the monastic medicine that spread through Europe after the fall of Rome. 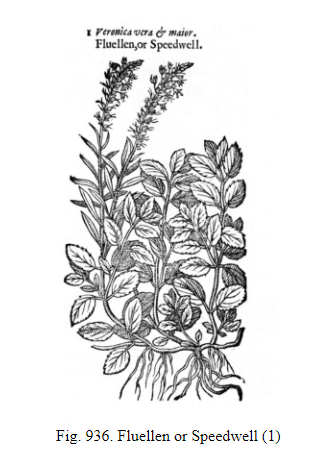 Gerard listed, and took the care to draw four types of Speedwell, and listed its virtues as:

A. The decoction of Veronica drunk, soldereth and healeth all fresh and old wounds, cleanseth the blood from all corruption, and is good to be drunk for the kidneys, and against scurviness and foul spreading tetters, and consuming and fretting sores, the smallpox and measles.

B. The water of Veronica distilled with wine, and re-distilled so often until the liquor wax of a reddish colour, prevaileth against the old cough, the dryness of the lungs, and all ulcers and inflammation of the same.

Culpepper, with his usual nod to astrology and folk traditions states,  “Venus governs this plant and it is also reckoned among the vulnerary plants, both used inwardly and outwardly: it is likewise pectoral, and good for coughs and consumptions; and is helpful against the stone and strangury, as also against pestilential fevers. An infusion of the leaves, drank constantly in the manner of tea, is greatly recommended as a provocative to venery, and a strengthener; it has been called a cure for barrenness, taken a long time in this manner.”


The Common Speedwell is a native of the Old World, but is abundantly naturalized in the eastern United States, where it grows in open, grassy places.

In this country, it is generally found on heaths, moors, dry hedgebanks and in coppices, where it is very common and generally distributed.

---Description---The plant is a perennial, of a prostrate habit, with ascending branches, bearing erect, spike-like clusters of blue flowers, the stems 3 to 18 inches long, varying very much in length according to soil. The leaves are opposite, shortly stalked, generally about an inch long, oval and attenuated into their foot-stalks, their margins finely toothed. The flowers are in dense, axillary, manyflowered racemes, 1 1/2 to 6 inches long, the individual flowers nearly stalkless on the main flower-stalk, their corollas only 1/6 inch across, pale blue with dark blue stripes and bearing two stamens with a very long style. The capsule is inversely heart-shaped and notched, longer than the oblong, narrow sepals. The plant is of a dull green and is generally slightly hairy, having short hairs, sometimes smooth.

The fresh herb is faintly aromatic. After drying, it is inodorous. It has a bitterish, warm, and somewhat astringent taste.

---Constituents---Enz found a bitter principle, soluble in water and alcohol, but scarcely so in ether, and precipitated by the salts of lead, but not by tannic acid; an acrid principle; red colouring matter, a variety of tannic acid, producing a green colour with ferric salts; a crystallizable, fatty acid, with malic, tartaric, citric, acetic and lactic acids; mannite; a soft, dark green bitter resin.

Mayer, of New York (in 1863), found evidences of an alkaloid and of a saponaceous principle. Vintilesco (1910) found a glucoside both in this species and in Veronica chamaedrys.

---Medicinal Action and Uses---This species of Veronica retained a place among our recognized remedies until a comparatively late period, and is still employed in herbal medicine.

Its leaves possess astringency and bitterness.

Among the Welsh peasantry, great virtues are attributed to the Speedwell. The plant has diaphoretic, alterative, diuretic, expectorant and tonic properties, and was formerly employed in pectoral and nephritic complaints, haemorrhages, diseases of the skin and in the treatment of wounds. Modern herbalists still consider that an infusion of the dried plant is useful in coughs, catarrh, etc., and is a simple and effective remedy in skin diseases.

It seems I can find no reason why such a healthful herb fell out of use.  I can but make a determined effort to cultivate this humble but beneficial plant in my own garden and explore its uses first hand.  I encourage my readers to do the same!
Judson Carroll
pollinator
Posts: 459
137
posted 11 months ago
Here is some info on growing Speedwell longifolia: https://davesgarden.com/guides/pf/go/844/
I'm not finding a lot of info on officinalis... I guess I'll have to try it out in a few different spots.
Marisa Lee
pollinator
Posts: 134
Location: South Shore of Lake Superior
32
I like...

posted 8 months ago
Speedwell grows in my yard, tolerating pretty serious shade although it supposedly prefers sun. Maybe the shade is welcome in this case because the soil doesn't dry out as badly. I have sandy, rocky soil. I have both thyme-leaved speedwell (very tiny flowers, barely noticeable in my weedy grass) and officinalis, which is much prettier. I plan to try moving some to a better spot. Hopefully I will not kill it. I haven't harvested/used any yet. I guess someone else planted it before I moved here.