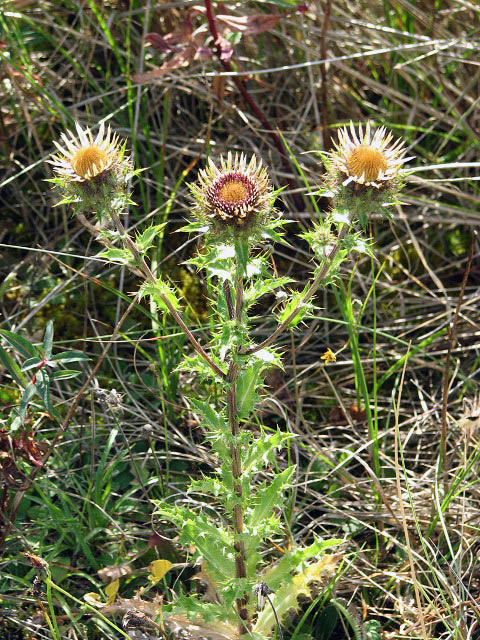 Several varieties of thistle are used medicinally.  Thistles are wide spread, generally growing in poor soil.  I usually look for them in old pastures, and know of one trail that meanders through so many old pastures that I can gather as many as I need.  These are generally the Bull Thistle, which is both medicinal and an excellent wild edible.  Among the 22 (or so) ingredients of the Great Swedish Bitters, we find Carline Thistle.  This one doesn't grow wild where I live, but I will attempt to grow it next spring - not only for its medicinal properties, but because the flower heads can be eaten like artichokes.... and I LOVE artichokes and anything similar!

According tot he remarkably interesting website, Medicinal Herb Info, "In the Middle Ages, an angel was said to have shown Charlemagne how to use the Carline Thistle against an epidemic of plague that was killing his soldiers.  Therefore, this herb was named after Charlemagne..  In medieval beliefs, the thistle could draw strength from other people and even animals to the person carrying the herb.  Another belief was; by eating a cooked Carline Thistle root a man could gain the sexual strength and potency of a stallion." 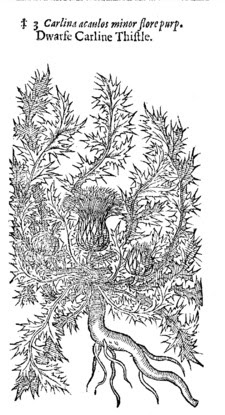 3. This small purple Carline Thistle hath a pretty large root divided oft-times at the top into divers branches, from which rise many green leaves lying spread upon the ground, deeply cut and set with sharp prickles; in the midst of these leaves come up sometimes one, but otherwhiles more scaly heads, which carry a pretty large flower composed of many purple threads, like that of the Knapweed, but larger, and of a brighter colour; these heads grow usually close to the leaves, yet sometimes they stand upon stalks three or four inches high: when the flower is past they turn into down, and are carried away with the wind: the seed is small and greyish. This grows upon Blackheath, upon the chalky hills about Dartford, and in many such places. It flowers in July and August. Tragus calls it Chamæleon albus, vel exiguus; Lobel, Carduus acaulis, septentrionalium, and Chamæleon albus, cordi: Clusius, Carlina minor purpureo flore, and he saith in the opinion of some, it seems not unlike to the Chamæleon whereof Theophrastus makes mention, lib. 6. cap. 3. Hist. plant.

The Temperature and Virtues.

A. The root of Carline, which is chiefly used, is hot in the later end of the second degree, and dry in the third, with a thinness of parts and substance; it procureth sweat, it driveth forth all kind of worms of the belly, it is an enemy to all manner of poisons, it doth not only drive away infections of the plague, but also cureth the same, if it be drunk in time.

B. Being chewed it helpeth the toothache; it openeth the stoppings of the liver and spleen.

C. It provoketh urine, bringeth down the menses, and cureth the dropsy.

D. And it is given to those that have been dry beaten, and fallen from some high place.

E. The like operations Dioscorides hath concerning Leucacantha: Leucacantha (saith he) hath a root like Cyperus, bitter and strong, which being chewed easeth the pain of the teeth: the decoction thereof with a draught of wine is a remedy against pains of the sides, and is good for those that have the Sciatica or ache in the huckle bones, and for them that be troubled with the cramp.

F. The juice also being drunk is of like virtues.

Maude Grieves also mentions the Charlemagne legend in her A Modern Herbal:.

The original name of this plant was Carolina, so called after Charlemagne, of whom the legend relates that:

'a horrible pestilence broke out in his army and carried off many thousand men, which greatly troubled the pious emperor. Wherefore he prayed earnestly to God, and in his sleep there appeared to him an angel who shot an arrow from a crossbow, telling him to mark the plant upon which it fell, for with that plant he might cure his army of the pestilence.'

The herb so miraculously indicated was this Thistle. Its medicinal qualities appear to be very like those of Elecampane, it has diaphoretic action, and in large doses is purgative. The herb contains some resin and a volatile essential oil of a camphoraceous nature, like that of Elecampane, which has made it of use for similar purposes as a cordial and antiseptic.

In Anglo-Saxon, the plant was called from the bristly appearance of its flowerheads, ever throat, i.e. boar's throat. It was formerly used in magical incantations.

The texture of Carline Thistles is like that of Everlasting Flowers; they scarcely alter their appearance when dead; and the whole plant is remarkably durable.

Natural Medicinal Herbs states that, "The roots and leaves are diaphoretic and purgative, and mentions that, the flowering head of the Carline Thistle can be "cooked, used as a globe artichoke substitute, though considerably smaller."  It also makes note of the common folk practice of using the plant as a natural weather predictor, "The flower heads expand in dry weather and close in moist weather. The dried flowers will continue to do this for a long time and they thus form a basic hygrometer for use in weather forecasting."

The Physicians' Desk reference for Herbal Medicine states that the medicinal part of the plant is the root.  "Carline Thistle is the root of Carlina acaulis collected in autumn and dried."  It states that the chief compound is the volatile oil, carlina oxide.  The essential oil, "hinders growth of staphylococcus... has mild diuretic, spasmodic and diaphoretic effects."  Under Unproven Uses, it continues,  "used internally for atonic gastritis, dyspepsia, diseases of the biliary tract, colds and fevers.  Externally, it is used as a wash for dermatosis, and to rinse wounds and ulcers, as a mouthwash to alleviate symptoms associated with cancer of the tongue."  "No health hazards or side effects are known in conjunction with the proper administration of designated therapeutic dosages."

The Carline Thistle is only one of many medicinal and edible thistles.  I enjoy them both as food and medicine, and as a means to better enjoy my meals.... I take a daily dose of Milk Thistle standardized extract as a liver protectant so that I can enjoy my wine, beer and bourbon without worry.  Other edible and medicinal thistles include:

posted 10 months ago
Well I can't speak to this particular thistle, but I have seen thistle blended in a blender with juice from a lemon and made into lemonade. It was very tasty.

denise ra wrote:Well I can't speak to this particular thistle, but I have seen thistle blended in a blender with juice from a lemon and made into lemonade. It was very tasty.

posted 10 months ago
I should mention that they strained it through cloth so that none of the spines were in the beverage.