Angelica, a Sweet Ingredient in Bitters and a Fascinating Medicinal Herb 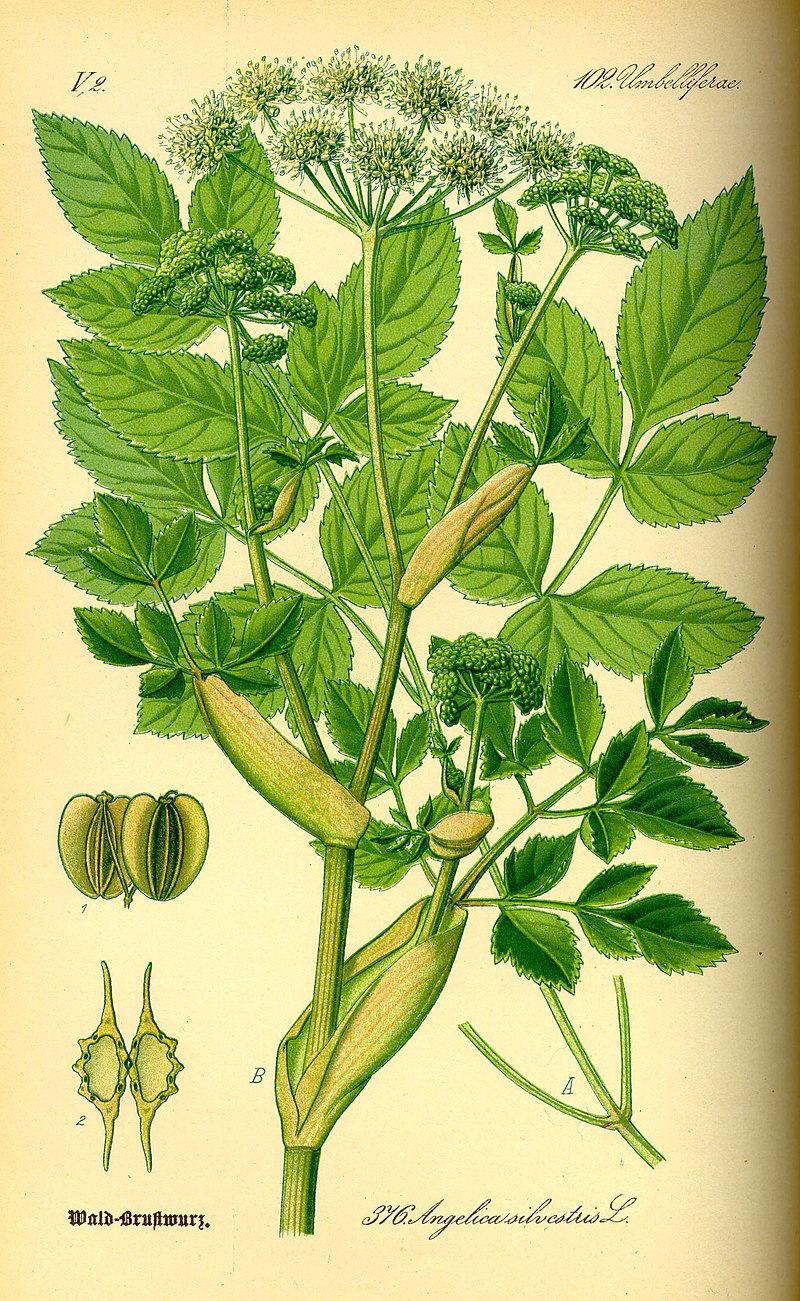 Angelica is one of those herbs that immediately brings me back to being a teenager in the Blue Ridge Mountains.  Angelica was an herb Rosie Hicks used for various ailments, including the asthma and chronic bronchitis that started me on my herbal journey.  I still have a decades old dried Angelica root and a paper plate on which Rosie wrote about the plant's medicinal properties. As a beginning wildcrafter could... possibly... mistake Angelica for Doll's Eyes or even Water Hemlock... depending on the season, the Hicks family was also adamant that I learn to identify it properly. For that reason, I suppose that I often think of Angelica as the first herb I learned to harvest from the woods... but, I suppose that is an exaggeration.  Just as I would think of Merle Travis' "Cannonball Rage" as the first tune I learned to play on the guitar, it wasn't - it was the first tune I learned to play well enough to impress the old-timers enough to be invited to pick with them.  I'm sure I learned about red clover, dandelion and several other herbs before I learned to identify and use Angelica.  But, Angelica was an herb the old folks harvested to sell to Wilcox, so this put me at another level.

Angelica grows plentifully where I live in the Appalachians - I can't attest to other regions. It has many medicinal uses that I'll touch on in a moment.  But, the flavor of Angelica also appeals to me.  It has the slight celery/fennel/anise/licorice flavor that I just love!  People used to candy the stems and many still enjoy it as a tea. A popular "cough remedy" among mountain folks included Angelica, Wild Cherry bark, (and sometimes, Sassafras Root) and honey in moonshine... one often sipped for "preventative purposes".  I like it as both a food and a medicinal herb.  I'm sure the great George Leonard Herter  would agree.  His classic cookbooks, including the iconic Bull Cook made clear that he considered that flavor profile as what made any dish "special and unique".

Angelica is a classic ingredient in liquors and bitters.  According to the Rodale Herb Book,  It is a primary flavor in Benedictine, French Absinthe, Vermouth, Chartreuse... and may have even been used to flavor Rhine wines to give them a unique appeal.  As an aside, I followed Herter's advice on enhancing the flavor of wine with the similar flavor of celery, and found him to be remarkably correct!  Herter recommended serving cheese, lightly seasoned with celery salt to enhance the flavor of wine and beer - he said this was an old wine vendor's trick to make the wine taste better.  WOW, was he right!  I'm sure Angelica could be used similarly, which may be the reason for its inclusion in so many old alcoholic concoctions that began in the monasteries of the middle ages.  Rodale includes a recipe for Digestive Bitters:

1 half ounce of dried Hops

The book lists Angelica as "carminative, stimulant, diaphoretic, tonic and expectorant"... "good for colds, coughs, pleurisy, flatulence, colic, rheumatism and urinary troubles "  It also notes that Parkinson wrote that it is "of special use in tremblings and passions of the heart."  Penelope Ody states in The Complete Medicinal Herbal, that energetically Angelica is, "Sweet, pungent, warm and generally drying."  Angelica is also an ingredient in Swedish Bitters.

Angelica has a fascinating history of use.  No one knows who first used it medicinally or the true origins of the name.  Some say that it was thought to bloom on the feast day of St. Michael the Archangel... while, others say that the Archangel Gabriel appeared during the time of the Black Plague and informed people that Angelica could be used as a remedy for plague.   William Hylton says a tradition in Latvia included a ceremonial procession of people carrying Angelica plants through villages, chanting a language so old that no one knew what the words meant, which certainly points to pre-Christian tradition.  But, "The first reference to Angelica was in the 14th century by Matthaeus Sylvaticus. In 1588, Tabernaemontanus wrote of “Angelica with its extraordinary power and virtue, as if the Holy Ghost or the dear angels had revealed this plant and wholesome root to mankind.” According to him,   the plant was primarily used in hospitals for infectious diseases to counteract ‘plaguey and pestilential air’. He also called it ‘poison root’ as it could be used in cases where poison was either eaten or drunk."  https://www.avogel.com/plant-encyclopaedia/angelica_archangelica.php

... it resists poison, by defending and comforting the heart, blood, and spirits; it doth the like against the plague and all epidemical diseases, if the root be taken in powder to the weight of half a drachm at a time, with some good treacle in carduus water, and the party thereupon laid to sweat in his bed; if treacle be not to be had, take it alone in carduus or angelica-water. The stalks or roots candied and eaten fasting, are good preservatives in time of infection: and at other times to warm and comfort a cold stomach. The root also steeped in vinegar, and a little of that vinegar taken sometimes fasting, and the root smelled unto, is good for the same purpose. A water distilled from the root simply, as steeped in wine, and distilled in a glass, is much more effectual than the water of the leaves; and this water, drank two or three spoonfuls at a time, eases all pains and torments coming of cold and wind, so that the body be not bound; and taken with some of the root in powder, at the beginning, helps the pleurisy, as also all other diseases of the lungs and breast, as coughs, phthisic, and shortness of breath; and a syrup of the stalks do the like. It helps pains of the cholic, the stranguary and stoppage of the urine, procures womens' courses, and expels the afterbirth: opens the stoppings of the liver and spleen, and briefly eases and discusses all windiness and inward swellings. The decoction drank before the fit of an ague, that the patient may sweat before the fit comes, will, in two or three times taking, rid it quite away: it helps digestion, and is a remedy for a surfeit. The juice, or the water, being dropped into the eyes or ears, helps dimness of sight and deafness; the juice put into the hollow teeth, eases their pains. The root in powder, made up into a plaister with a little pitch, and laid on the biting of mad dogs, or any other venomous creature, does wonderfully help. The juice or the water dropped, or tents wet therein, and put into filthy dead ulcers, or the powder of the root (in want of either) does cleanse and cause them to heal quickly, by covering the naked bones with flesh; the distilled water applied to places pained with the gout, or sciatica, gives a great deal of ease.

Mrs. Grieves, in her classic, A Modern Herbal (1931) writes, "Its virtues are praised by old writers, and the name itself, as well as the folk-lore of all North European countries and nations, testify to the great antiquity of a belief in its merits as a protection against contagion, for purifying the blood, and for curing every conceivable malady: it was held a sovereign remedy for poisons agues and all infectious maladies."

My notes from (the late herbalist) Michael Moore's classes read:  Dong Quai is a cured, prepared angelica root that is very different from angelica. Angelica is diaphoretic, good for digestive cramps and gas pain. The seed is better than the root for the gut. Root may work for menstrual cramps. Seeds are sedative. Parsnip seeds are also good for stomach upset. Don't use during pregnancy or nursing.

Medicinal use of Angelica: Angelica has a long folk-history of use as a medicinal herb, in particular for the treatment of digestive disorders and problems with blood circulation. The root is the most active medicinally, it should be harvested in the autumn of its first year of growth, sliced longitudinally if necessary and dried quickly. If well stored, the root retains its medicinal virtues for many years. The leaves and seeds can also be used. The leaves are harvested and dried in late spring before the plant comes into flower. The plant is antispasmodic, carminative, diaphoretic, diuretic, expectorant, stimulant, stomachic, tonic. An infusion is used to ease flatulence, indigestion, chronic bronchitis and typhus. It stimulates blood flow to the peripheral parts of the body and so is of value in treating poor circulation - it is considered a specific treatment for Buerger's disease, a condition that narrows the arteries of the hands and feet. Angelica is contra-indicated for people with a tendency towards diabetes since its use can increase sugar levels in the urine. This plant should not be prescribed for pregnant women, nor should the juice be allowed to come into contact with the eyes. An essential oil from the seeds is sometimes used as a rub to relieve rheumatic conditions.

posted 1 year ago
Angelica always reminds me of a visit to the Fortress of Louisbourg near Sydney Nova Scotia. This is an old French fort and settlement from the early 1700s. There was a huge field of angelica in bloom the day I visited, the sun was just breaking through the clouds and the angelica was blowing in a light breeze. It was magical.