posted 2 months ago
Looking it up,the earliest grow lights  were gaslights, in fact the night/day cycles used by pot growers originated there.
I get that gas is problematic.
What led me to this idea is looking for the best use of gas from a biodigester.
Putting a biodigester in a greenhouse to produce/contain the heat has been suggested.
Solar gain,  wood burning,  compost piles all could add heat to the greenhouse but biogas could be used to create light.

This use is similar to using incandescent light , in that both light and heat are created.
Like a clay pot candle  heater , you could place mass above the lamp flame,obviously this would not produce more heat,  but it could spread out release time.
Because of the potential dangers indoor pollution from gas lamps,  a narrow diameter chimney, perhaps surrounded by thermal mass could vent directly to the outside.

Details aside,  the point is to use our biogas to create light and heat right near the point where it's created, and use both combustion products as efficiently as possible.
This idea also lends itself to the "windowless greenhouse" idea,  that is a heavily insulated windowless dedicated  grow building reliant on artificial light.
Solar PV  has been suggested for powering the lights,  but gaslight could work.
Supercrazy idea,  hanging plants,  gas powered floor lamps, super insulated reflective ceiling.
Both radiant and covection heat would warm the soil in the planters above.
It could be especially synergistic as a fodder system located in the middle of an animal barn.

One more idea that haven't been able to find anything on.
Heating gas lamp mantles with wood.
Obviously we would want to avoid the radioactive mantles,  but there are alternatives.
The mantle of a gas lamp adsorbs heat energy and emits most of it in the visible light spectrum.
Maybe a tiny wood fire could power this reaction.
Perhaps large charcoal producing retort could power a lot of light over a many hours.

An eficient way to heat your structures info below
https://permies.com/wiki/63928f371/Wood-Heat-DIY-Rocket-Mass

posted 2 months ago
Hi William. This is how we do it in our greenhouse.  We have made it down to 26 degrees this year so far.  I chose to vent it. We use a 3" aluminum pipe with a stainless scrubber in it so it vents slowly.

We can run vegetable oil in it now.  If you look at the my vegetable oil lamp post it tells you how I do it.  I Have tried to get the old fashioned mantels to run good off of other fuels. I have only had luck with alcohol, naphtha ( drip gas) and kerosene. There is a good preformed mantle that is made by Aladdin to be heated with a kerosene wick.  It may be good to experiment with.  Lahmans hardware had a few pictures of them.
IMG_20190425_182048738.jpg 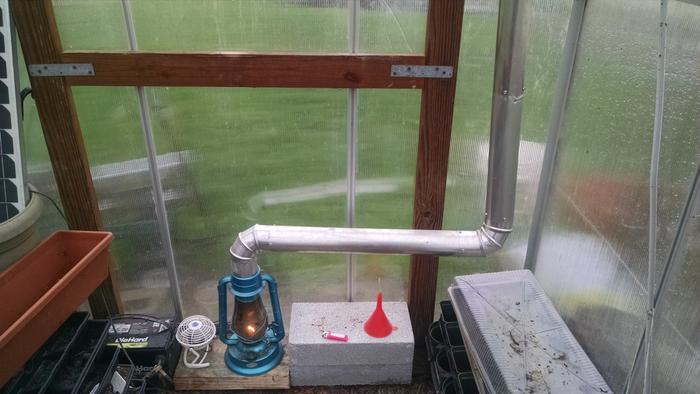 posted 2 months ago
Let me just geek out for a minute...
SO freaking cool!
So very much what I've been thinking of but you have done the WORK.
I will be reading your posts on lamps, and I really appreciate your response here.

I will certainly try the lantern. I do have a few things to add.  My first concern is small animals knocking over the lantern.  I think that placing the lamp in a metal container would help.  Yes, I have had various animals seek shelter in my high tunnel.

I use containers that hold about 200 gallons of water, and I use composting raised beds. I am already able to take temps down to the mid 20s. The lantern might take me down to the teens.

I was in the process of building a concrete block L cove to hold a wood heater, but life got in the way. The lantern gives me an option for this winter.

posted 2 months ago
We've researched biogas for our school for years, but have really only made it work in summer as a proof of concept. A big issue is that winter is cold here, and the process in a biogas digester slows down to almost nil at low temperatures. Even if we put a solar greenhouse over it to heat it, we probably won't be able to keep it above 15 or 20C (59 - 68F). Oh, and that's using warmed water to mix with the cow dung before adding it every day. For our purposes, I thought that the larger the digester tank, the better we'd be able to cope with that. Winter's cow dung input could sit in there moving along slowly, undigested for a couple of months, hopefully digesting (producing gas) before it comes out. But that would require having a tank that is big enough to hold a couple of months of input. I don't think it's easy to get much gas in winter.

You want to produce gas to heat your greenhouse in winter, but we want a greenhouse to heat our biogas tank in winter!

posted 2 months ago
I had not thought that getting up to temperature would be an issue, between solar gain and biological activity.
I figured on a build like a solar batch water heater, a tank insulated on all but one side, that side glazed.
Put that in a greenhouse for even more insulation/ glazing.
Manure in hot beds produce excess heat , I figured the digester would do the same.
Ah well.

posted 2 months ago
Aerobic composting generates heat. Anaerobic composting, as is happening inside a biogas digester, doesn't produce much heat, and not enough to keep itself warm and keep the microbial action active in cold weather. Methane production works best around the temperature of a cow's gut (similar to ours), and slows down a lot when you get down to what we consider "room temperatures," and is almost stopped when you get any lower than that.

However, I do not have personal experience, it's just what I've read in some different basic resources about biogas.

posted 2 months ago
Author Message
Rebecca, this could be useful for you.
Solar cities  shows an insulated biodigester with solar thermal collection:
passive solar heated and insulated ibc-biodigester