Arkady Schneider
Posts: 27
Location: West Virginia
10
posted 2 months ago
We seem to have survived our first summer as fledgling "homesteaders", having quit city life and made for the hills. There are a thousand projects underway now, but particularly I thought I'd share a little here about the chicken-compost-silage-wormery-greenhouse-nursery arrangement I designed this summer, as well as some ideas about where to take it from here.

It is the epitome of a work in progress (fool's errand?), so I'd love to hear suggestions for improvement, or miserable disasters you see brewing around the corner.

The coop is elevated on locust poles. It's mildly drafty but generally dry. Right now, we've got 8 chickens (layers) from the same clutch, and we'll add meat birds and more layers this spring.

I've shamelessly stolen from Sean at Edible Acres for the general plan, and I think I saw something somewhere about compost under walkways in a Colorado permaculture greenhouse, which I've borrowed as well. Even still, I think I may have incorporated some original elements as well.

There's no electric fence, but their wings are clipped and they don't seem interested in flying the enclosure (fences stand about 4-6 feet tall). Along the fence, I'm working on growing thorny plants. I've transplanted several black raspberries, some prickly pear, and will be growing stinging nettle. Of these, only the prickly pear grows on the inside of the fence. We're in a very rural setting, and I hope that the mean old plants might suggest to raccoons and snakes that they should move along. The raspberries, cactus, and nettle will also make their way onto our plates.

Two seedling Texas redbuds were planted in the run. Back when we lived in the Republic, these trees were always loaded down with seedpods in the fall, so I'm hoping that when these mature they'll provide another supplemental source of feed. There isn't much out there on the subject, but I've seen some indications that Redbud seeds can supplement chicken feed. Eastern Redubds grow in abundance around here, but I think the Texas variety produces a heavier crop. We’ll see.

Before I let the birds out each morning, I'll throw a handful of whole corn onto each pile to encourage scratching. As the piles decompose, I move each one down the line to the pile I keep under this cattle pannel arch. This is the pile I put their evening meal onto (fermented feed). I've also transplanted yellow dock around the skirts of this pile hoping that the roots will draw up some of what is leeched out. My chickens go wild for dock, so I keep it fenced in. As it grows, they can reach the more mature leaves. I'm trying the same with dandelion.

By the end of the day, each pile has been completely knocked down. When the chickens turn in each evening, I'll spend 15 minutes rebuilding each pile. I had wondered whether this complete cycle of destruction and rebuilding would keep the bacteria from heating things up sufficiently, but the stuff is still steaming away well into the evenings.

At this rate, a pile moves through the three spots over the course of about 5 weeks, though I expect this to slow down soon. After it has broken down in the last pile, I'll put it under the walkways in the hoop houses to become worm castings for springtime garden use. One of the three hoop houses has red worms working the stuff over, and I'm debating moving some into the others in the spring too. I intend to get some residual heat from the decomposition of the compost through the winter to bump up the temps in the hoop houses. I understand vermicompost to be typically cooler, so I'm trialing both kinds this winter in separate hoop houses.

The bottles you may see strewn about in the pictures are filled with water for the purposes of passive solar heating. It’ll be marginal, perhaps, but I guess not negligible.

The hoop houses are also situated within the chicken enclosure to help keep the pest pressure down.

The birds also help to keep the pest pressure down on vegetable seedlings. This summer when we started seeds, I set their trays onto these hardware cloth "platforms" hanging in the greenhouse cattle pannel or the exposed one above the compost (shaded with a sheet). The seedlings went totally unmolested by pests thanks to their elevation and the chickens.

Along these lines, I'm also keeping bags of silage, covered together under a tarp, among them. I haven't seen much on silage for chickens, nor much on small-scale silage, so we'll see how it goes. In short, contractor trash bags are filled with densely packed lawn clippings (about 30 lbs each), to be distributed bag-by-bag two or three times a week starting in December. We'll see how it goes.

I'm holding out hope that I'll be able to optimize things to the degree that I'm eventually feeding birds for free using things grown on site (redbud, yellow dock, comfrey, nettle, and possibly a stand of poplars and paulownia trees coppiced for fodder), as well as scraps and other resources harnessed from local waste streams (yet to be established). I considered working BSFL into the system too, but I can't see how the economics work out, especially if I can't breed and overwinter them here.

We're going to get bees this spring. The more I see how well the chickens keep pests at bay, the more I'm thinking about situating the beehives (3 of them) in the run as well, along the run's perimeter facing outward. This also means we're keeping them behind a fence and close enough to the doghouse to dissuade nighttime predators. My cursory research suggests that, surprisingly, bees and chickens can coexist peaceably.

I want to also raise some tree seedlings in air-pruning boxes in here, again situated such that the chickens will keep varmints from bothering them.

So, with this context in mind, I'm hoping to invite ideas, suggestions, and critiques from the creative folks around here. Do you see any missed opportunities in this "system"? Are there any more key "functions" to stack into this set-up? Can you see any low-hanging fruit that we could add here that would particularly leverage things?

We're cheapskates, so while it's convenient that there's a Venn Diagram out there where stinginess overlaps with principles of sustainable agriculture, we're also just plain "limited" when it comes to projects with price tags.

For what it’s worth, I’m aiming to feature this work-in-progress in my next post here, where I’m trying to capture my plans for our developing homestead and synthesize other half-baked ideas about living the way we’re trying to live. I had hoped to work out some kinks and brainstorm with y’all before I did. 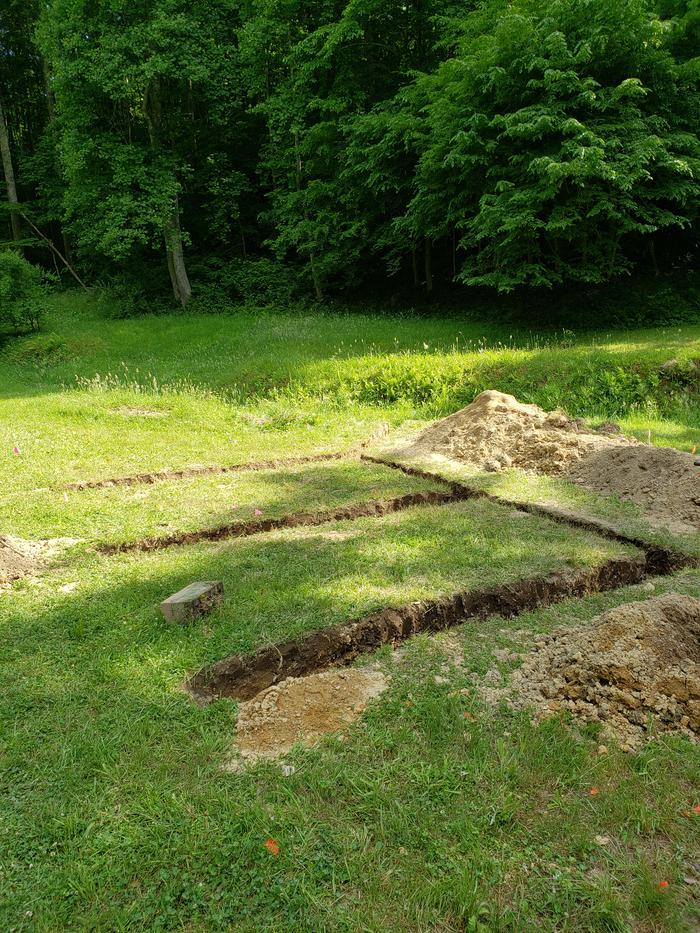 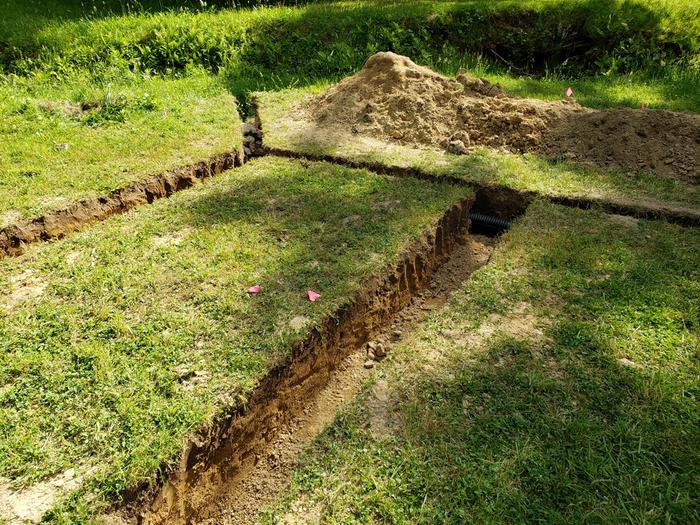 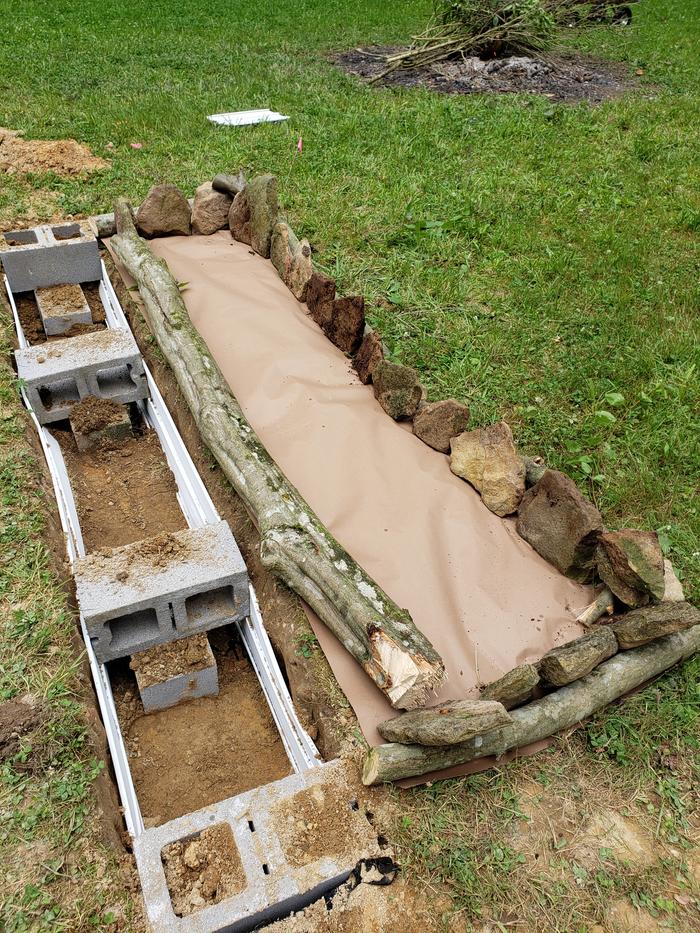 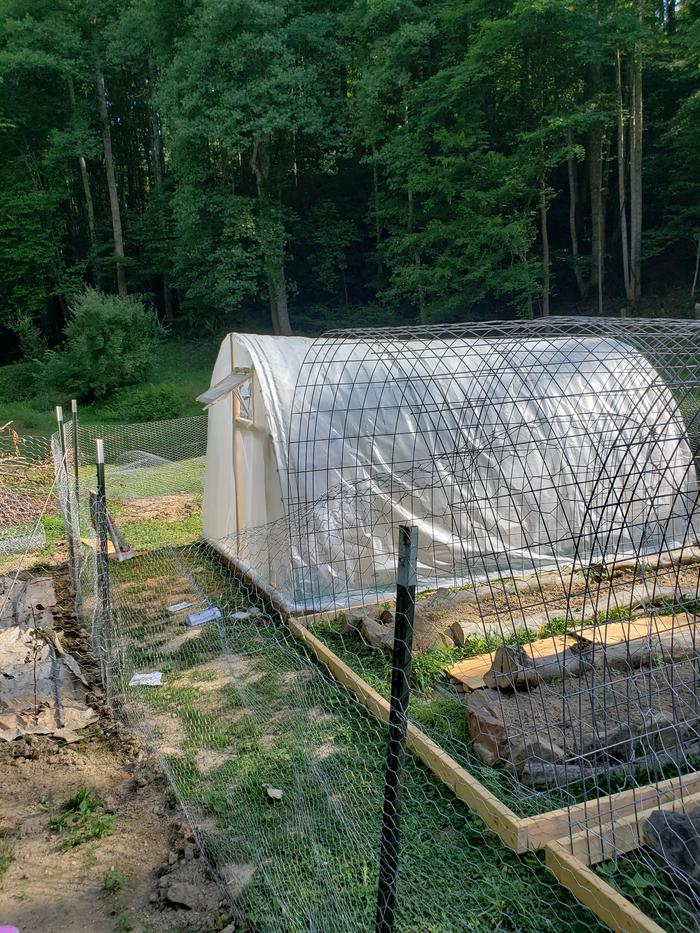 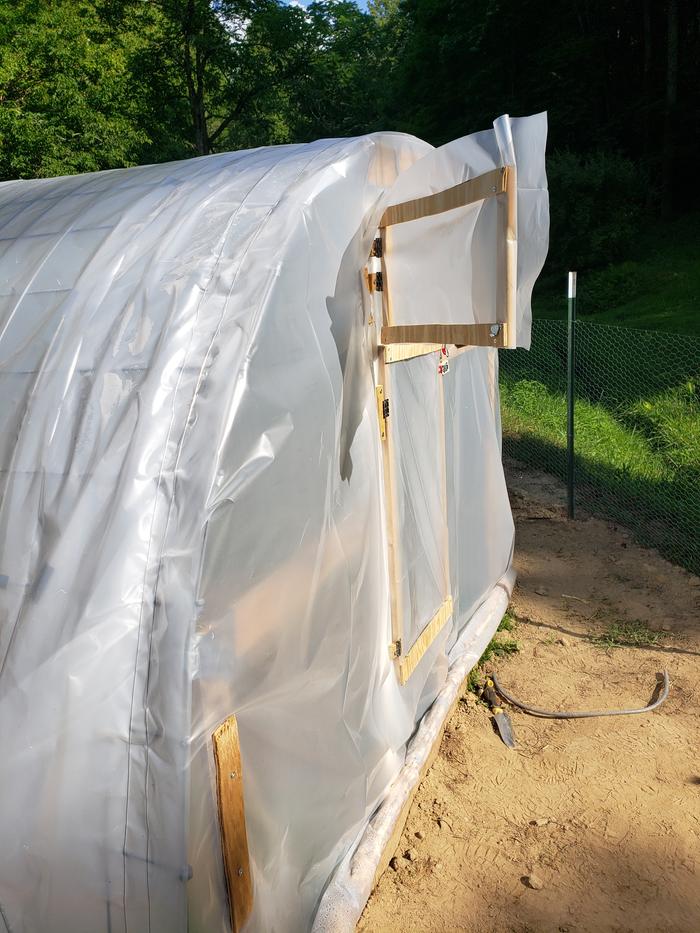 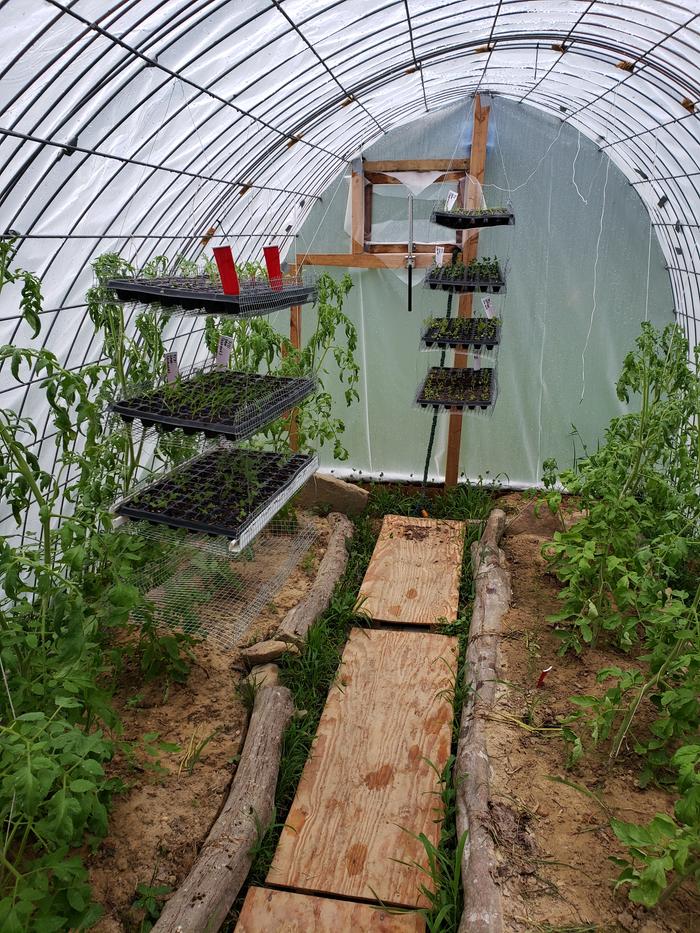 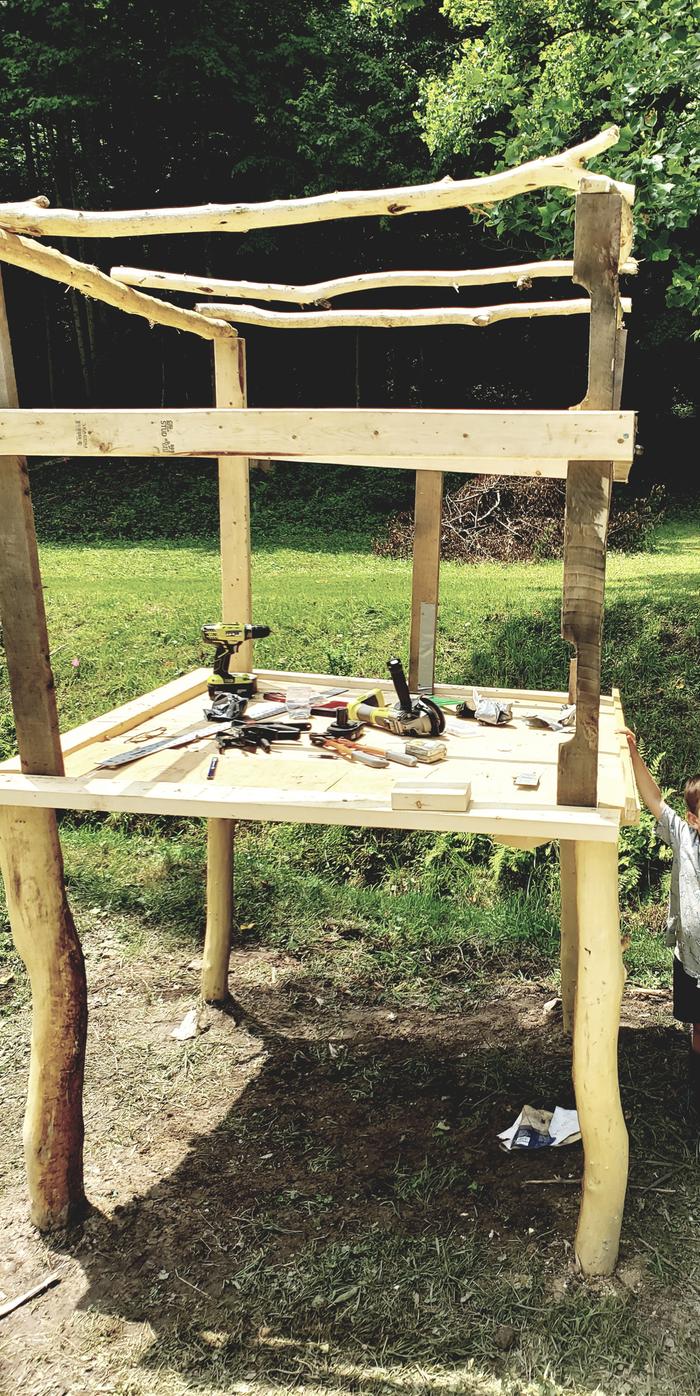 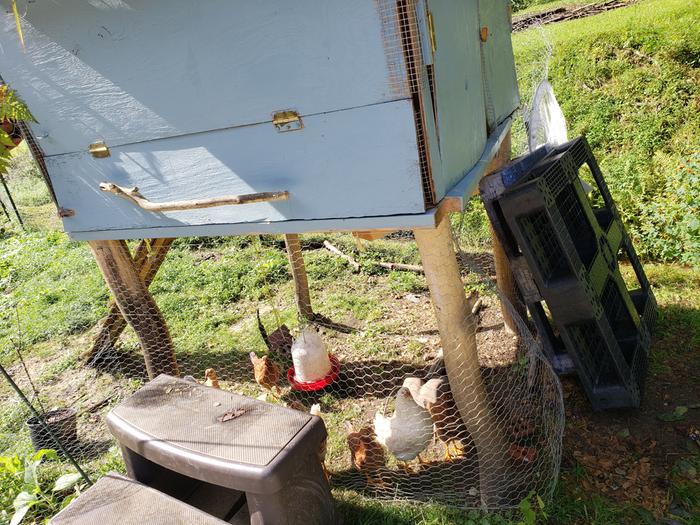 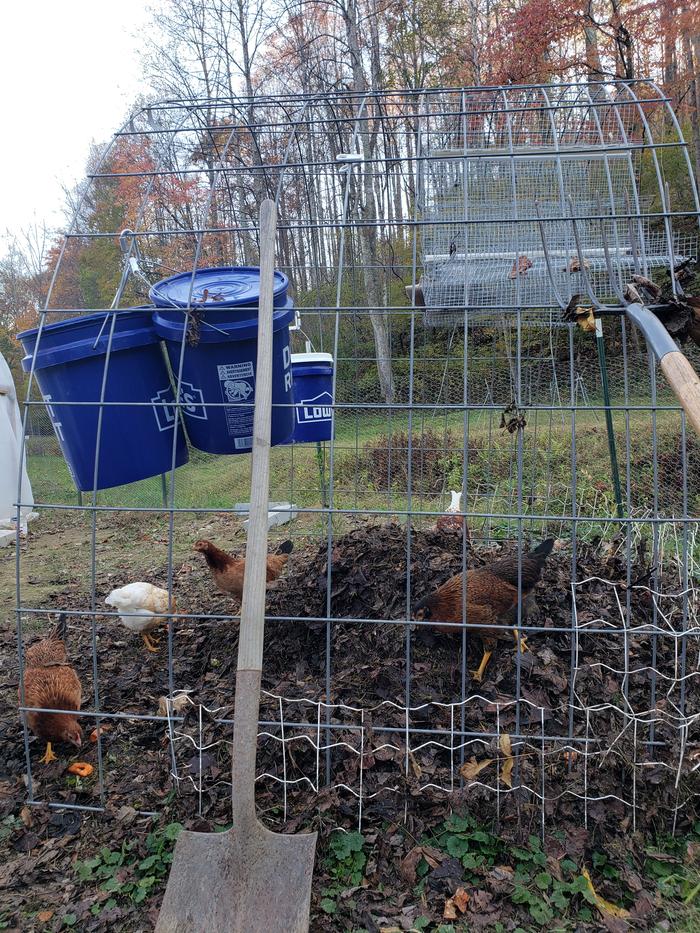 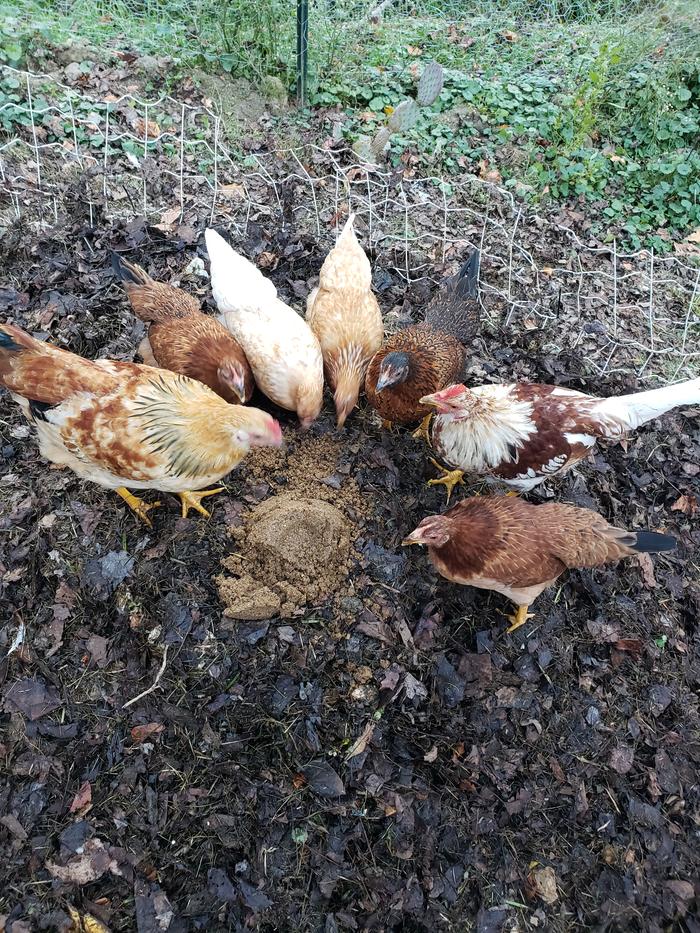 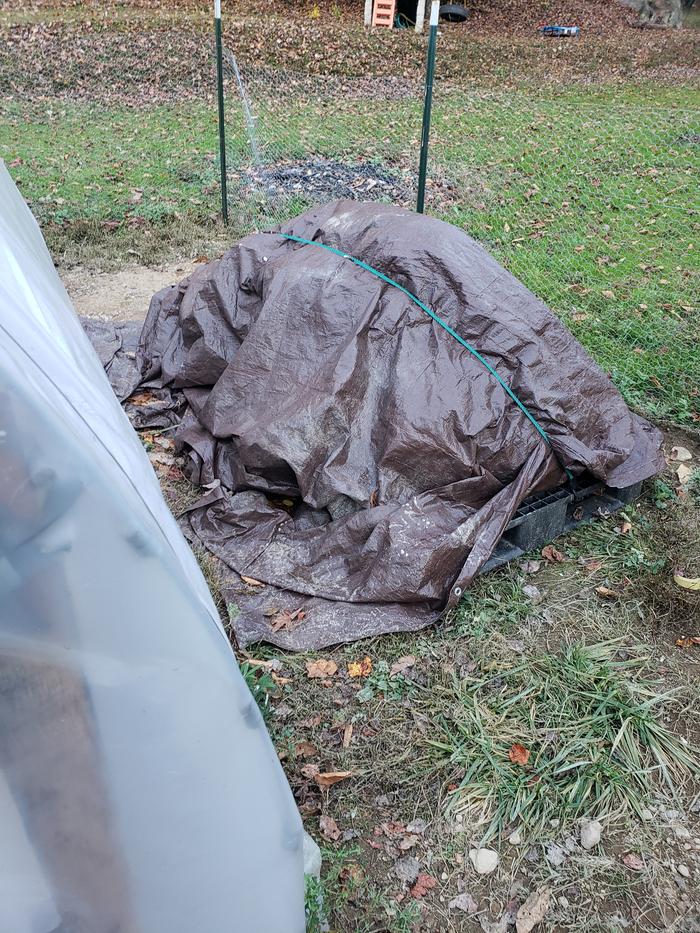 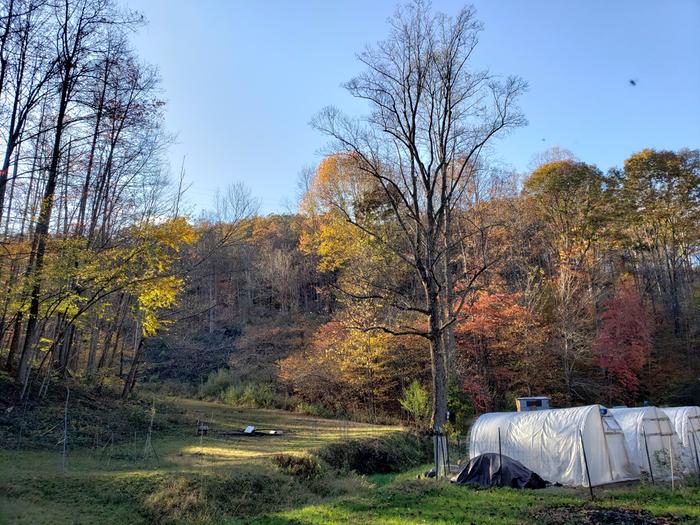 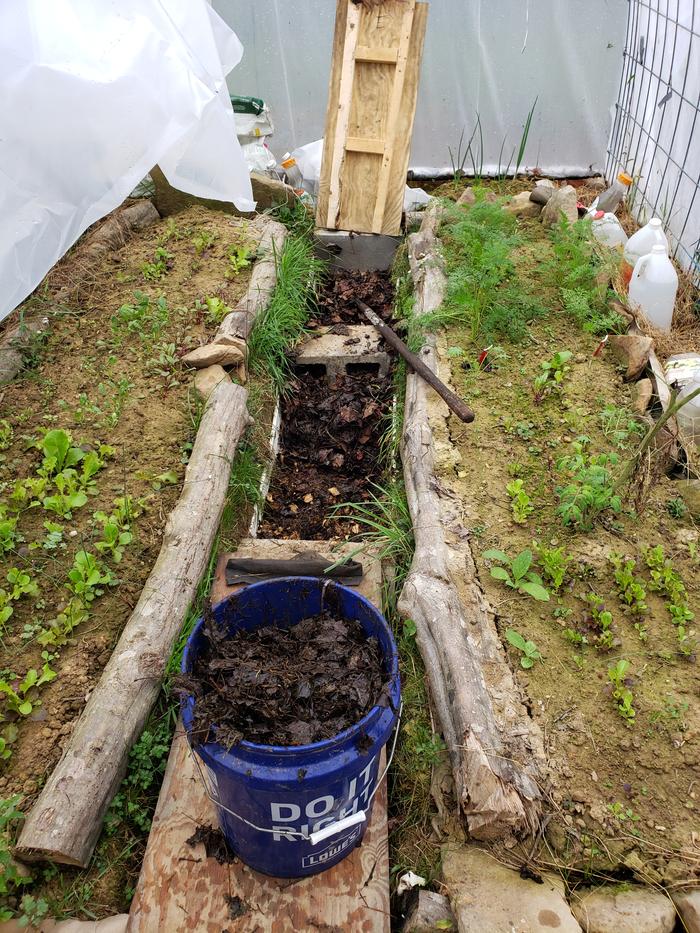 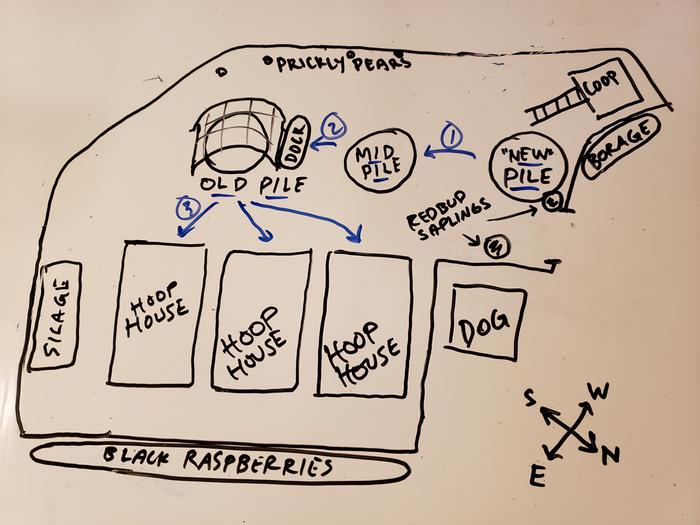 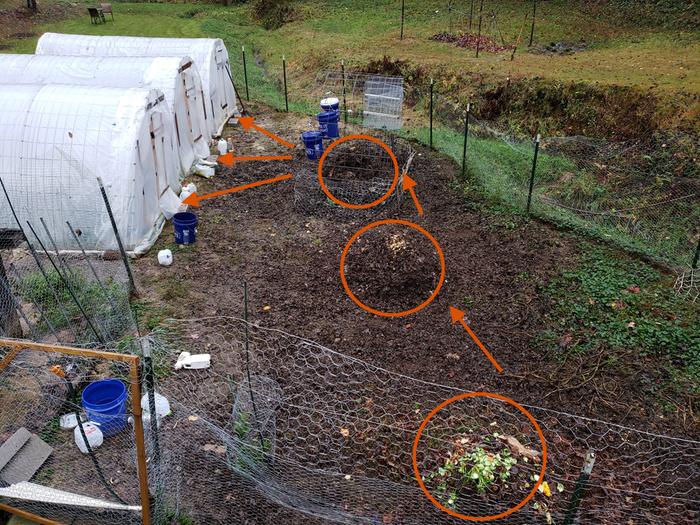 posted 2 months ago
Nice work, Arkady.  Impressive by any standard, but first year - wow!
I have a similar setup with the chickens & greenhouses in close proximity and it seems to be working well.


One or two things I'd recommend:

- I'd maybe beef up the chicken run fencing a bit. I imagine you have a good guard and lock them in the house at night, but I've had many fox attacks happen in broad daylight.
Keep you eyes peeled for predators, look for tracks & maybe setup a trail cam to see if anything is stalking the area.

- I dunno if you've considered growing mushrooms, but I can hear those logs in your garden screaming, "Inoculate me!"
Even if you don't like mushrooms, they can be sold or used as barter material. You could also inoculate woodchips.
Garden Giant mushrooms in woodchips worked well for me this year, they are easy to grow and are good for composting wood and building the soil.
Trade-off is your wood edging & posts break will down faster, but those can be replaced in time.

Other than that, congratulations on your big move - you seem to be adjusting well.

"He that plants trees loves others beside himself" -Thomas Fuller

Arkady Schneider
Posts: 27
Location: West Virginia
10
posted 2 months ago
Thanks Pete! I hadn't thought about inoculating the logs, but I really like that idea! I've been lamenting the fact that those logs (sycamore and maple, I think) are going to rot away so quickly, but I might as well take advantage of that reality. In fact, they sprung up a few times with some kind of bracket fungus. Since we made our move, we've gotten really into mushrooms, so I'm definitely interested in this. Thanks for the suggestion! I'll look around for what would grow well on them.

Thanks for the tip on the fence too. Given how wild our region area is, wouldn't put it past a fox to try something in daylight. Having all that decomposing food lying around doesn't help, I suppose.

bruce Fine
Posts: 928
30
posted 2 months ago
the simplicity of your hoop house construction is inspiring.
Arkady Schneider
Posts: 27
Location: West Virginia
10
posted 2 months ago
Thanks Bruce! It seems to be holding up well. If we lived in a place with strong winds, I think it'd be a different story. Still, someone with more expertise could slap together something more windproof with the same materials.

This morning we had a mild frost, but the coldest it got in there overnight was 39 degrees. As I write, it's 79 in there and 55 without.