Which potato varieties do you use for baking/roasting, and which for boiling?

In the USA, is it correct that Russet or Idaho are the most popular floury potato choices for baking and roasting? Which other varieties do you like for this purpose?

For waxy potatoes in the USA for salads and boiling, which varieties do you like? Are Yukon Gold the most popular choice? Are all fingerling potato varieties waxy/boiling potatoes?

I've heard that in the UK King Edward is a popular baking potato, but I'm not sure if there are any varieties that stand out there and in other places in Europe as a good boiling/stew potatoes? Do you know of any?

Which potato varieties do you like for which purpose? Are they easy to find? Or obscure lovely ones that you can only get if you grow your own?

I like King Edward, Cranberry Red, and Sapphire a lot for baking/roasting, and sometimes the waxy potato Pink Eye works well for this too in its own way. For boiling I like Pink Fir Apple and Pink Eye.

posted 1 month ago
Here all potatoes are waxy boiling potatoes unless one buys expensive British imported baking potatoes at around $1.5 EACH.
In the UK I preferred Maris piper for baking and the most commonly known salad potatoes would be Charlotte and  Jersey royals (international kidney)

posted 1 month ago
As I get older I seem to tolerate less and less. I’m off gluten. Trying to be off dairy. Now all the solenoids.  Which is hard too but they don’t make me feel very good. Eureka years ago someone smuggled me some potatoes from Peru. I love them!  I can eat them without too many problems. They are delicious!  This years harvest was well let’s say shared. Unfortunately the mice left me a few. I will not be planting in cages. The drought I’m sure did not help.
I grow 7 différent varieties. My partner loves potatoes. He even eats potato sandwiches. The best thing about the purple potatoes is that if I forget them in the garden they come back year after year. That’s the great thing about a hugel bed.
F2E3E96B-9C32-4D42-981F-9B5D3588CCCB.jpeg 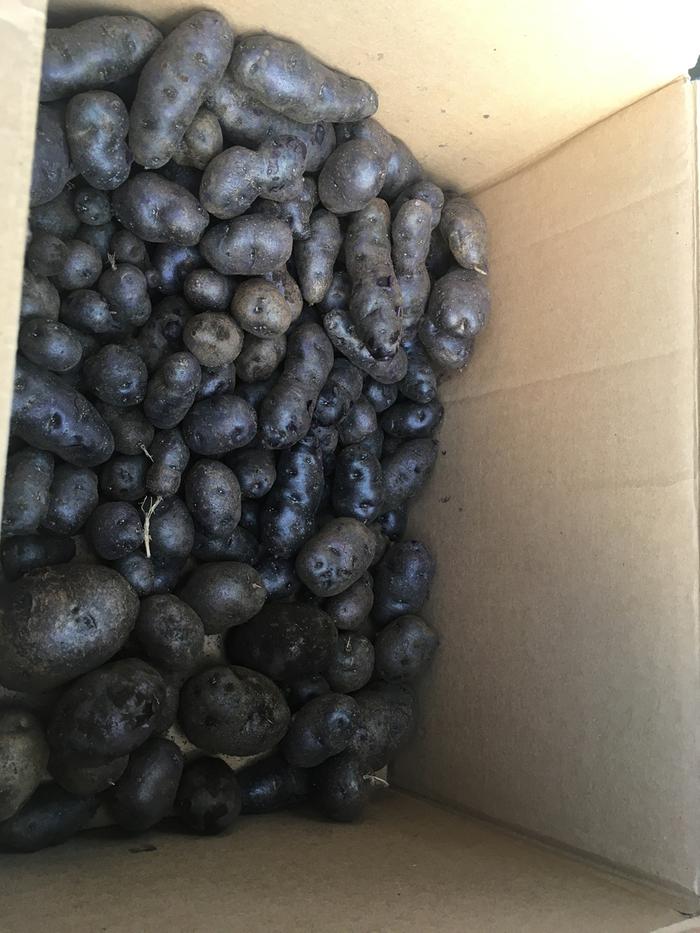 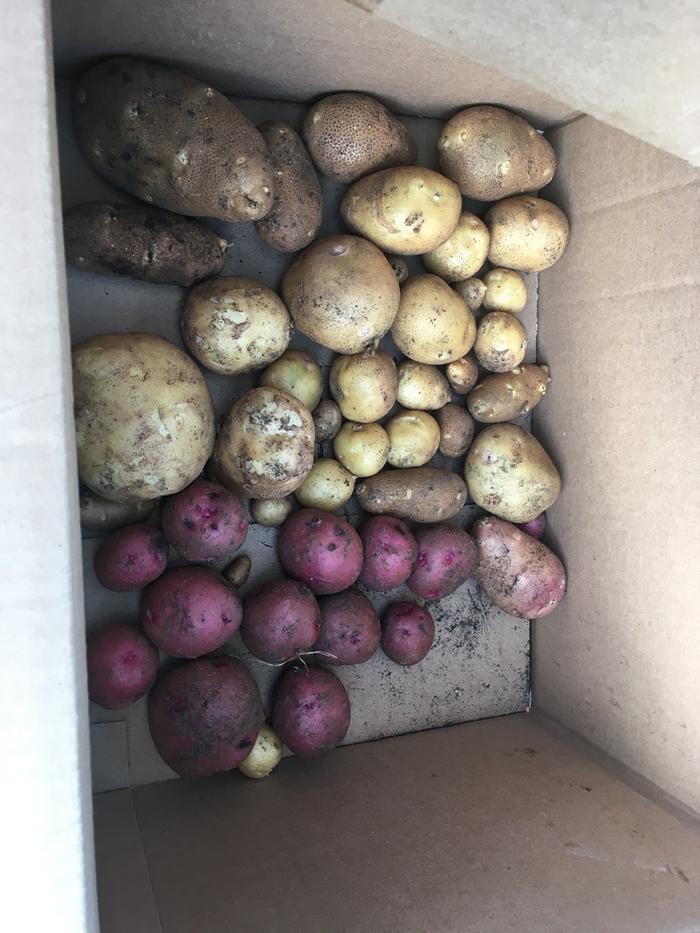 posted 1 month ago
So needless to say the purple potatoes are my favorite for roasting and boiling. When I was eating them all I loved any potato roasted. A few other root veggies along with it some Redmond salt, good quality organic olive oil or coconut oil and fresh garden herbs. Yummmmm it’s making me hungry.!
Joseph Lofthouse
steward

Posts: 5441
Location: Cache Valley, zone 4b, Irrigated, 9" rain in badlands.
2073
posted 1 month ago
In my kitchen, all potatoes are generic, and are used for any and all purposes.

The most common way for me to eat potatoes is pan-fried. There again, I like lots of variety in the textures and flavors of the tubers.

posted 1 month ago
If you're not roasting sweet potatoes in the oven, you're not living! Another fun twist is to toss the sweet potato pieces in corn starch (then oil and seasonings, salt and pepper alone are fine) and then roast. The corn starch changes the surface texture.

We also use russet potatoes for both roasting and mashed potatoes.

How much can I 3D print for the garden? Looking forward to finding out

Robin Katz
pollinator
Posts: 139
Location: Idaho
68
posted 1 month ago
My experience here in the U.S. is that most stores carry russets (no specific type given, used for baking, mashes, fries), reds (no type given, more waxy type for salads, mashes, etc.), fingerlings, and Yukon Gold. If you're lucky you can find some of these organic. Sometime you can find small potatoes called "new" but they're not really since new potatoes have a very thin skin and wouldn't ship or store well.

Of course there are some specialty stores that provide more variety but you pay for the premium service.

The only way I've found to get good varieties is to grow them myself. The flavor is always better than store bought, they store much longer, and it's a lot of fun too. This year I grew purple potatoes from seed and got some nice variety in growth habit and tuber production. I discovered that deer love potato greens too. I predict tall fencing in my future...
Mk Neal
pollinator
Posts: 343
Location: Chicago
89
I like...

posted 1 month ago
Yukon gold are popular for all purposes. In stores you generally find there russets for baking, and medium-sized, roundish red-skinned potatoes usually just labelled "red potatoes" which are better for boiling and roasting.  Sometimes there are also medium-sized, roundish potatoes with smooth tan skins that are labelled "white potatoes."  You can find blue potatoes and fingerlings in smaller quantities, but they are more of a specialty product.

Ellendra Nauriel
pollinator
Posts: 352
125
posted 1 month ago
There's a variety called "Elfie" that my mother has declared the best frying potato ever. She keeps reminding me to make sure to grow plenty of them next year, even though planting season is months away.

"Pinto Gold" is a good soup potato. It tends to be small and smooth-skinned, which makes it easy to just toss some in whole. It would probably do well in potato salads, although the color from the skins sometimes bleeds into the flesh and looks weird.

My favorite mashing potatoes are the gold-fleshed, waxy kinds. I know most people prefer the floury kinds, but to each their own. I really like "Redgold". It did fairly well in my garden this year. "Yukon Gold" and an unnamed variety from the grocery store were both good, too.

I tend to treat baked potatoes as mashing potatoes with skin on, so I don't have any variety just for that.

"Red Pontiac" did outstandingly well this year, and it's a good all-around potato, in my opinion.

I grew a fingerling variety this year that wasn't so good. It produced very well, but about every 3rd one was so bitter it burned my mouth! I ended up composting them rather than deal with that. Unfortunately, it didn't have a variety name on the label, just "Fingerling". It looked a lot like "Russian Banana", but there's no way to tell for sure.

Myron Weber
Posts: 71
Location: Orange County, CA, USA
2
posted 1 month ago
I'm not very sophisticated, so I only think of 3 varieties of potatoes. Whether I'm buying them or growing them, I never get more complicated than this:

1. Russet: baking, french fries and hash browns, also okay for mashing, soup/stew, or fried
2. Red: boiled, smashed (rustic mash with skins on), fried
3. Gold: mashed, roasted, stew, can also be baked, can be a substitute for russet, but not as good for baking or fries
Mary-Ellen Zands
Posts: 82
Location: Ontario, Canada
20
I like...

posted 1 month ago
Last year I grew cranberry potatoes. Oh my goodness they grew to enormous sizes, like as big as 5 pounds.  Don’t know why I didn’t take pictures?  I planted them this spring but because of the drought I lost them. They had a beautiful red blush through the flesh. Good everything potato. I guess you could say one potato could feed a whole family. I’m trying to get ahold of more of these potatoes at a farmers market. I guess it’s the Dutch blood in me that finds it hard to give up potatoes completely. I remember travelling across Holland as a child with my Opa looking for his favorite potatoes.  He would drive hours scouring the countryside looking for his farmer connections. My mother remembers that in the ‘50 they went trailer camping to Switzerland. My Opa made sure he took pails of potatoes along in the trailer, because they surely wouldn’t have his potatoes where they were going! Those were the big yellow fleshed crumbly taters. Also bientjes were a fave!
Hilary Duinker
Posts: 11
3
I like...

posted 1 month ago
yet another example of how deprived we are in "developed" countries, where food comes from a grocery store.  In my experience here in Canada you see "yellow" (usually waxier) "white" or "red" (usually more floury) potatoes and then russets or "baking" potatoes, usually wrapped in aluminum foil.  fingerlings are available as a fancy farmers market type offering.  Yet there's actually hundreds of different varieties.  We really need to cultivate more diversity!  I've been trying out different varieties and started organizing an annual big group buy for seed potatoes for my remote island community a few years ago.  So this year I grew over 20 different varieties as I am trying out a bunch of new ones that different people ordered.  Pink Fir Apple is my big winner so far - most productive and keeps well, a great heritage fingerling variety that often grows into crazy cool hand shapes.  Everyone loves Yukon Gold, which was developed at Guelph University in Ontario, they taste great and are good for everything but I haven't found them to be especially productive.  I think it's what gets sold as "yellow" but not sure.  Purple potatoes are really fun and I love them mashed and roasted but they can sometimes be hard to find in the dirt and I miss a bunch.  If you haven't already, read the chapter on potatoes in Carol Deppe's book The Resilient Gardener (great book).  it's got everything you need to know to grow your own potatoes and she has recommendations for varieties.  There is also a neat citizens science 'heritage potato project' going on in Canada.  Definitely worth encouraging readers of the book to explore different varieties themselves, potatoes are a fantastic intro gardening crop. Eagle Creek farm at https://www.seedpotatoes.ca/ has an extensive list of different varieties with descriptions.

posted 1 month ago
Here in southern Brazil I can occasionally get two kinds of potatoes:the Mona Lisa variety is always available (yellow skinned, yellow inside), and the red-skinned Asterix shows up every once in a great while.
No good heavy baking potatoes, sadly.
I grow blue potatoes that somebody might have accidentally had fall into her suitcase during a recent trip.