What foods shouldn't I grow?

Valentine O'Hare
Posts: 1
posted 1 month ago
I have been told that wheat, rice, and corn is better to buy rather than grow in regards of cost, space, ect. And it makes me wonder... Is there food you think is better off being bought rather than grown?
Rob Lineberger
gardener

posted 1 month ago
That is situational.  Some people looking for complete independence from the grid and food distribution systems would grow, raise, forage, hunt, or barter all their food.  Some, like me, live in the middle of a city where it is an unreasonable goal to grow the majority of my own food.  So from that perspective I grow things that don't get commercialized because they spoil too easily (mostly tomatoes, malabar spinach, delicate herbs.) Or things that are to expensive. (herbs again.) Basically things I can't get without some trouble.

I don't grow bell peppers.  I mean, I've tried, for decades. Just last night, in fact, after nurturing a pot that takes up 5% of my available gazebo space, irrigating it since April, I harvested my second bell pepper of the year. It is the size of a racquetball. So doing the math that's one tiny bell pepper every three months.  I love it when people tell me I'm growing them wrong because I have grown them in pots, ground, upside down planters, compost rich, clay, potting soil, amended dirt, and hydroponic beads with and without irrigation for 20 years across three states and 8 unique locations.   So I may be doing it wrong but then again I'd argue they aren't simple to produce.

Potatoes seem like hit or miss.  If you hit (which is easy to do) you have more than you can eat.  If you miss, you have no potatoes.  Potatoes cost about 60 cents a pound.

I grew beets this year.  Or should I say, beet.

So the theme for me I guess is that if it grows under the ground, it's not worth it to me for the effort/reward ratio.

Nick Williams
Posts: 29
Location: Billings, MT
4
posted 1 month ago
Really going to depend on what's important to you. I love growing sweet corn, but yeah, probably not worth it for flour corn (50 pounds is a few bucks).

Probably not worth growing your standard russet potato, but there are some cool potatoes out there that are either unavailable, or much more expensive from the store. Grew "Huckleberry Gold" potatoes this year and really enjoyed them.

Like Rob, I've had abysmal luck with bell peppers (not great luck with any pepper in general really, other than one MASSIVE Hungarian Wax pepper), and I straight up don't even try growing cucumbers anymore. Swear, I always get like a half dozen decent cucumbers, and then ten thousand miserably bitter cucumbers. I just buy them instead. Can get big sacks of pickling cucumbers for like 10 bucks at the farmers market here when I'm putting up pickles, and just buy the odd slicer at the grocery store...

posted 1 month ago
I dont cross anything off my grow list until I have tried it several times and it has failed each time. Much has to do with your time and space.  I have 11 acres, and I am looking into putting 1/4 acre into corn to advance my own independence. Like Rob, I used to have problems with root crops. Then I discovered straw and raised beds.  I now get all the potatoes, carrots, and beets that I can handle.  So, to answer your question, while I would prioritize what I want to try, I would not automatically cross anything off my list. Your time and space might dictate a different approach.

Oh yes, welcome to the site!

posted 1 month ago
That’s a tough decision....what to put the effort into, and what not to. For beginners, it’s quickly answered. Due to lack of experience and knowledge, you’ll quickly learn which crops are too difficult for you. But as others indicated, as you experiment and gain skill, you will expand into those more difficult varieties.

And you hit the nail on the head about the grains. Unless you have lots of room to devote to them, plus the ability to harvest & thresh, plus the time to devote to it, grains are better off being purchased. I grow corn, but don’t bother with much in the way of other grains,

R Scott
pollinator
Posts: 3656
Location: Kansas Zone 6a
118
posted 1 month ago
I wholeheartedly encourage everyone to grow as close to 100% of their food as PRACTICAL.  Not necessarily possible, as it is financially foolish to spend 10 times as much to grow something that is lesser quality as can be bought reliably. Grow nutrition and buy calories. At least to start.

The stuff that has to be picked green and "ripens" in the truck on the way to the store may even taste like the fruit or veggie it is supposed to be, but has about 1/4 the nutrition as a vine/tree ripened version that spent a few minutes from plant to mouth.

What those plants are depends on your space, climate, and diet preferences.

posted 1 month ago
I would plant what I want and see if it will adapt to my location.

And a soil test might tell you what is good to grow where you live.

We love to grow our own corn because it is so much better than what we get at the grocery store.

I can understand about wheat and rice though there are many other grains that you could try.

The first one is very important, I can grow amazing cabbages, but I hate cabbage so that's a total waste of time and space. (I do grow some to sell but that was not the question)

My list of what I will always grow is almost the opposite of Rob's all the root crops are plant and forget here and so long as the voles don't get them they crop very well. It just shows that what not to grow really depends on where you are and what your local conditions are. I do agree on the bell peppers though, I have managed to get one pepper per plant for three years. whereas chili peppers do well but have no heat, apparently that's a warmth issue. So I do not grow peppers or chili or any real heat-lovers. I cannot grow maize as it's to cold here and I cannot grow sweetcorn as the neighboring field is 30 hectares of fodder maize.


What not to grow depends on what are your specific restrictions. are you short on space? Time? Experience? Potatoes for example are a very easy and low effort crop, but they do take a lot of space, so if space is an issue it would be silly to grow many potatoes. Whereas blanching celery takes a lot of work but not much space. If you are just starting off then write down what vegetables you really like. then look where they grow what conditions they like etc etc, come on here and ask peoples experience of them. make a list of 10 or so you really want to try and go with that.

bruce Fine
Posts: 862
25
posted 1 month ago
I found out the hard way that some things are very hard to impossible to harvest without the proper equipment and labor when I planted buckwheat as a cover crop but then when it went to seed I started thinking harvest time till I actually tried to gather the seeds and separate them from the husks. turns out the local seed supply place where I got the seed only sells sacks of organic open pollinated buckwheat seed and its as good to grind up for groats and flour as it is for planting.
Rob Lineberger
gardener

posted 1 month ago
Just to show y'all here is what I suspect will be my last pepper harvest of the year.  Cute little feller ain't he? 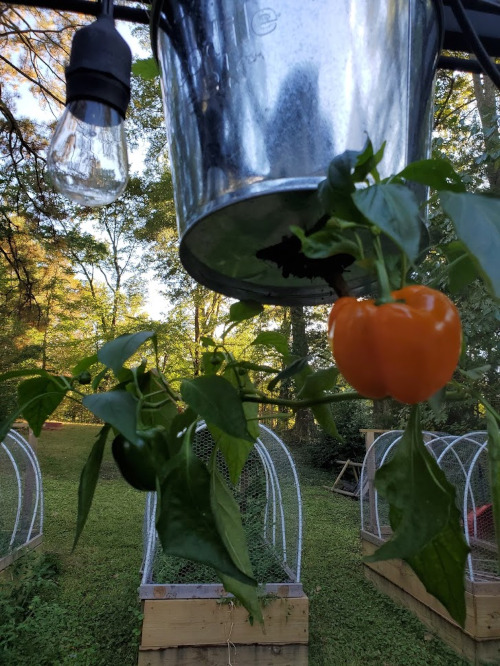 Can Beethoven
Posts: 5
posted 1 month ago
First at all, you should do a soil test, it tells  what to grow where you live. Second, think what kind of food grow in you climate. You can start with corn or rice.
Tereza Okava
gardener

posted 1 month ago
I think about my time/money balance (my garden is not my only responsibility). I live in a region with lots of local agricultural production and if I can get good, organic food in season for cheap I don't grow it- not worth my time.
I grow things I can't get, or can't get organic. I also avoid things with too much pest pressure, that are too finicky. I don't need to be everything to everyone. I also have the luxury of all my food coming from the country here, nothing we eat is imported except the occasional luxury convenience food.
Jen Fulkerson
gardener

posted 1 month ago
Unfortunately there is no one size fits all answer for this, or any garden question really.  There are so many variables. Space, weather likes ect. ect.
Nothing is better than picking fresh veggies from your garden.  Most likely not only will it taste better, it will be more nutritious.  I suggest making a list of what you want to eat, then do a little research.  See if it will grow in your area, when and how to grow in your zone. What is the difficulty ?  Then plant lots of the "easy" veggies.  Save some space for more difficult veggies, and give it a shot.  My reason is if you start with difficult veggies, you may become discouraged, and I don't want that to happen.  But. I tend to learn more from my failures then success.  And one of the best things about gardening is you never know what will happen.   I too have failed again and again with bell peppers.  Being a stubborn sort I keep planting them.  I have learned for me the lunchbox peppers grow very well and taste just as good as the bell, and they are so prolific it doesn't matter they are small.  Also my daughter ask me to plant as many purple veggies as I could find.  A purple bell was one.  They were small, maybe half the size of a regular bell, but they did very well.  Tasted like a green bell.  If I had quite with my failures I never would have discovered what works.
Have fun with it.  It won't take long to figure out what you don't want to waist your time on.  Good luck. Happy gardening

Ken W Wilson
pollinator
Posts: 1159
Location: Nevada, Mo 64772
99
posted 1 month ago
Squash isn’t worthwhile for me. I had about 3 summer squash plants. I got one small squash. I had about 3 winter squash plants and harvested 8. I can buy them for about 1.50. Fighting the squash bugs just isn’t worth it. The squash bugs attacked my watermelon after killing the squash. This cost me about 5 watermelons that didn’t get a chance to ripen.

Seed potatoes of interesting varieties cost more than a good crop is worth.  Our weather is too wet at planting time and too dry while theY are growing. Potatoes are cheap.

Sweet potatoes are cheap too, but I like growing them. They usually grow well here too.