Today was all about cleaning up. We packed a big stack of glass onto the trailer and sorted some recycle-able metal. Lots of organizing and ordering.
I got one of the Allerton Abby doors unstuck and swinging freely then laid pine boughs over the muddy path to the Abby.

Not the most exciting day but all necessary tasks. And working with everyone here makes to day pass easily.

I would like to work on getting my bow staves bending but I need to get to rooting my tree cuttings so I'm going to try to start tonight. But first!... It's Taco night so I need to get this done and go eat tacos.

Today was basically a derivative of yesterday. Moved the pallet of glass up to the lab and stored it at the boneyard, moved some boneyard stuff back to basecamp,

Then some sightseeing and woodworking.

Fred took Logan, Matt, and I around to see Willa Wonka, Cooper Cabin, and to see the view of the river from the top of the lab. We got a rundown of the improvements slated to be done at Cooper Cabin. Looks like there is a great deal of work to be done and I'm looking forward to it.

Today Matt and I added some flooring where some changes had been done and got some dimensions for other work to be done.

Plus we swept up the cabin to make it presentable cause Fred is staying there.

Still no progress on the tree rooting front. I'm going to plant the Elderberries I have and hold off on the others for now. I would like to get them in during the daylight tomorrow, but no promises. 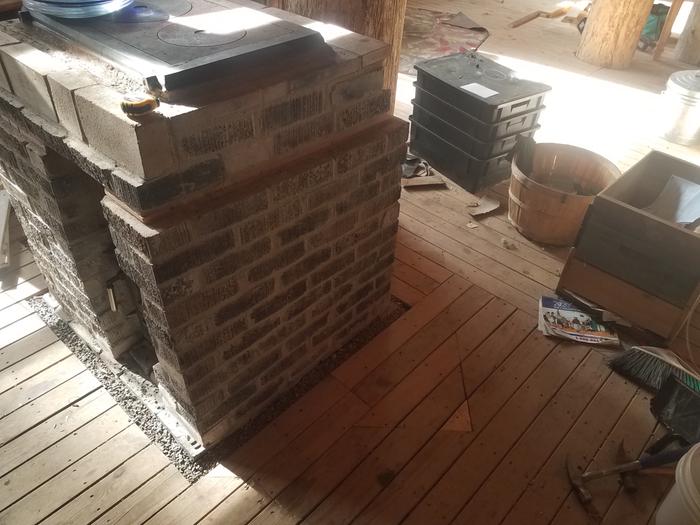 I worked on finishing a rock jack and putting up junk pole fence. Pretty happy with the improvements. I've added supports and a ledge further from the fence post so the rocks can be stacked at the end of the lever the supports make with the post, plus the wider platform means even more weight. Thought about how to keep shearing forces off of the nails so there should be fewer failures at those points and transfer most of the force onto the rock embedded under the legs.

This section of fence only needs it's poles slipped in and it is all done.

After lunch all of us went up the mountain to a section of forest with burned and fallen trees to harvest firewood. On the way up the Ranger took a smoke break and had to get some tender loving care before it would make it all the way up. The view is incredible up there (need some good pictures).

We spent hours delimbing and cutting to length the fallen wood. I worked on a difficult one. It was a large diameter tree which had torn up it's root mass as it came down and was wedged between two standing trees. I worked down it by propping up the truck and cutting off lengths. By the last length Logan and Matt helped me lift and right the trunk so as I cut the roots wouldn't tip towards me and pinch the saw. I really need to think of getting pictures of stuff before the job is done. Anyway...

We found a pile of wood someone had previously cut down but had left behind. It had been there long enough to dry and get some mushrooms but was in good condition. The hard part was it was stacked on the downhill slope and had to be carefully un-Jengafied without falling down the mountain.

Jen lost her footing, fell down the mountain and we haven't seen her since...

Kidding, but she does have a banged up hand and I propose the nickname Knuckles until she heals up. Hope she post pictures on her thread.

At four o'clock we had gotten 2 trailers loads done and everybody packed up and headed back down the mountain.

I'm pretty wiped out. Only extra pic I have is of my new lantern from my Mom. Thanks Mom, it's great.
JunkPole1.jpg
JunkPole2.jpg
LoadofWood1.jpg
LoadofWood2.jpg
NewLantern.jpg

Going to start at last night, made myself some tea in the Tipi plus some caffeinated tea in a thermos for the morning. The new lantern lights up the space nicely.

In the morning hours Nine and I went up to work in Cooper Cabin. I had to finish the flooring and cut out some logs which had been laid across two doorways. The wood stock we had wasn't exactly the same thickness so I left the threshold edge a little high and beveled the flooring to ramp down to the existing boards.

I was glad I got to use my wood planes to shave the planks down. I have a affinity for using hand tools and I get a good bit of enjoyment by using them.

I used a power sander to clean up the plane marks and smooth the edges level with the floor boards.

I finished one doorway and came back after lunch for the other. Even after charging the battery, I still used up all the charge in the chainsaw before I got the last spot shaved down all the way. So I got to use a chisel, file, and plane to smooth out the chainsaw marks. Then back to the power sander to buff out some spots where the chisel tore out some wood. The difference in height between the two floors is more than quarter inch so the threshold slopes but it is smooth and none of the boards stick up to snag anyone toes.

Here is where the comedy of the day begins...

Unbeknownst to me, Nine and Logan (who were my ride back to basecamp) had gotten stuck at the bottom of a hill in the mud while servicing some game cams. They had to call for help and couldn't reach me to let me know.

I finished and was packed to go at 4:50. I waited a bit, texted Lara to see what was going on, and walked over to the main road to get picked up. While standing there I spot out of the corner of my eye a little black cat...

Some background, I haven't mentioned it here, but my cat I brought is a unspayed female cat named Bella. I had her adjusted to the Tipi and going outside on her own after about a week. Mostly she stayed inside napping. But Monday night when I went to settle in for the night she wasn't there. Or anywhere else. Trying to find a black cat in the pitch dark is pretty difficult. Especially if she doesn't come when called.

So I've been pretty worried the past few days, wondering if she'd been chomped by something bigger than her. Plus it has been below freezing at night and she doesn't have long fur.

But Lara said she thought she saw Bella sneak across the road while heading toward the Abbey. And I had noticed some food missing from Bella's food bowl and some little paw prints around the Tipi.

So with some signs of her I figured she'd comeback on her own. I've kept the Tipi flap open a bit if she comes by for food or water during the day. I think she is in heat and has the instinct to roam. It usually last a week and she goes back to normal.

If my ride hadn't gotten stuck and I hadn't quietly walked out the main road I wouldn't have spotted her.

I set my tools down and get a picture first. Because she likes running away. Then I try calling her and she just ignores me. I get closer and she starts trotting away. Then after looking back she dashes off and I lose her in the woods.

I know dogs have owners/masters and cats have caretakers/prison guards, but it stings a bit when a little cat you raised from a kitten and literally got her off the road tells you "Fuck you buddy, I'll come back when I feel like it."

Anyway, she'll probably come around this Sunday or Monday wanting a warm bed and food again. Possibly ready to have kittens. I hope not, I wanted to give one of the cats at basecamp a shot first.

After getting blown off by my cat I waited for a ride. Picture of Miss Independent at the bottom.
AlmostThere.jpg
AllDone.jpg 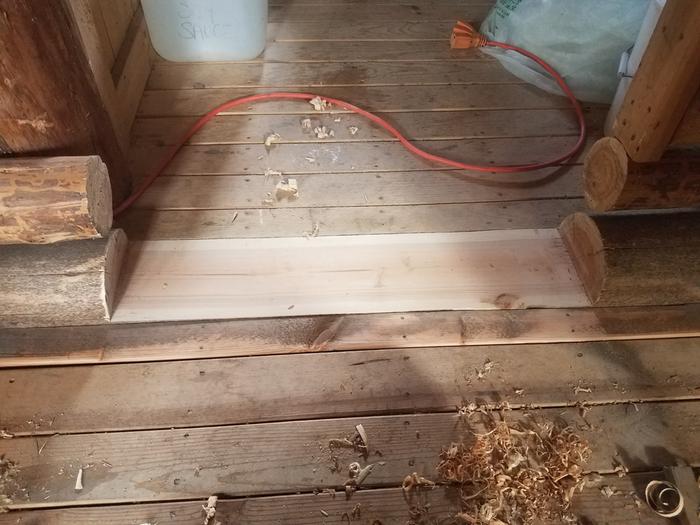 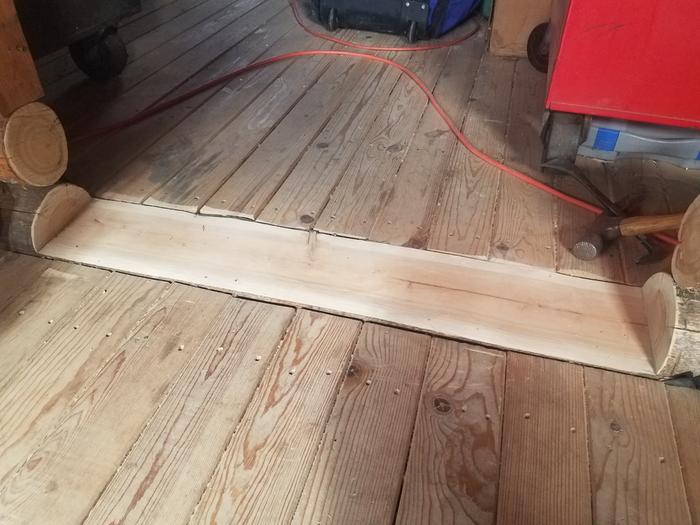 posted 4 months ago
Lantern rocks! Right?!?!? And nice work on the door.

I am particularly enjoying the permies newsletter. So thanks for that! I sent the link to bee keeper friends - and I think a few other people are going to sign up to watch your adventure - and benefit from the site. One can only wish...

About that cat. That damned cat.

I told you she is a vial betrayer interested only in satisfying her own needs. I rescued her. And she turned from my arms to you. Followed you around like a "puppy." Waited by the front door for you to come home from work.

But she is a fickle one.

And I expect I will win the Bella Pregnancy Pool.