posted 6 months ago
I've used solar electric fence chargers for the past several years and have decided it's time to switch to a DC set-up. My issues with solar chargers is that they have too small a solar panel and too small a built-in battery, so charger unit longevity hasn't been that great. Add to that the number of cloudy days I get, and well, it's just time to try something better for my rotational grazing needs.

I have a portable solar charging station with which I'll recharge the battery for my new set-up. My question is regarding the kind of battery. I always see car batteries being used, but wouldn't deep cycle batteries be better considering the number of discharges and recharges the battery will go through? Or are car batteries preferred because the cranking amps supply the kick needed to make the fence effective?

I experienced the exact same issues with one of the "all in one" solar fence chargers.

Normal car batteries do not like to be deeply discharged, and normally do not last that long in a charging/discharging scenario, but if an extra one was lying around it could be used temporarily. A deep cycle battery will be a step up, usually "marine" batteries with Amp Hour ratings (not marine "starting" batteries) are available locally at reasonable prices. The "best" battery would be a battery specifically designed for use in a solar electric power setup, those are also deep cycle but designed for longer life. I also prefer to use Absorbed Glass Mat type batteries.

Attached is the picture of the components I purchased for my new "solar fence charger," unfortunately the new fence this is intended to power is not yet completed, thus I have not yet tested out the setup in the field.
Solar-Fence.jpg 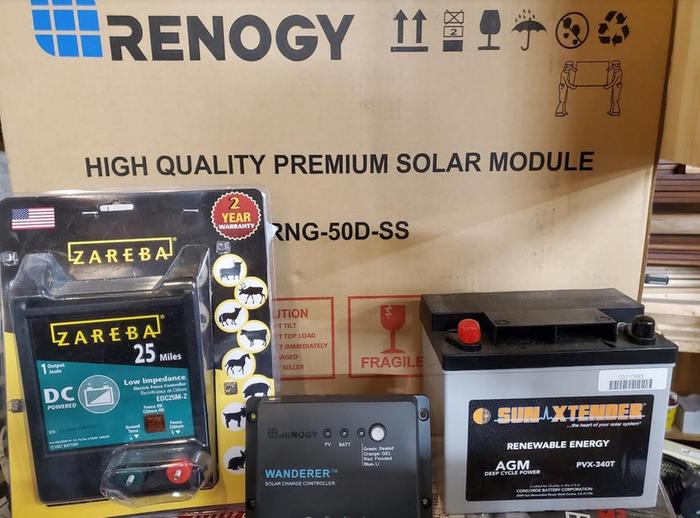 Agm batteries don't leak when they get tipped over.  Always put the charger outside the paddock so the cows don't tip over your battery....

Premier had a really good solar sizing guide.  It was made for their fencer but was easy to figure for anyone's.

John probably has a lot more solar panel than most would need. I ran a much bigger charger on a much smaller panel and had no issues.

posted 6 months ago
This is great, perfect timing! I was just researching chargers because it's getting close to setting up time. Thank you John! Thank you R Scott!

The current plan is to set up the energizer and battery in the feed and storage area in the barn, and from there, run electric fence to divide into rotational grazing paddocks. John, I looked into marine batteries when we set up our freezer and fridge on solar, but the only ones available locally had limited amp-hours, like 35 or less. I'm thinking a 100 amp-hour deep cycle battery would be better, and hopefully, not need recharging too frequently.

I don't know what is local to you, but walmart has a 109 amp hour deep cycle marine battery for $82. Ages ago (8 years-ish) when building our house I had a Walmart deep cycle battery to run cfl lights off a small inverter, carried and charged at our rental. Worked fine, and the battery lives to this day now it is starting my tractor.

I agree my panel is oversized for just running a fence charger, I was building in flexibility to add lights or another charger in the future, I should have noted that.
Leigh Tate
author & gardener

John Young wrote:I don't know what is local to you, but walmart has a 109 amp hour deep cycle marine battery for $82.


I'll take a look next time I'm there. It's true that availability varies greatly by location. As does price. We also have a batteries-bulbs-plus and of course, the standard auto supply stores. A year ago, I just couldn't find much of anything locally that was deep cycle.

posted 6 months ago
We like are zareba.  We have ran it for 7 years.  I use a 50 watt panel, a $19 harbor freight charge controller with a 220 amp hour AGM battery.  We had a bunch of these 220 ah batteries dumped on the market here when the cell towers switched to lithium.  I checked it in our last 7 days of darkness and the battery was still at 14.4v.  We added a remote switch to cut the ground out from the fence charger for doing chores.

Edit AGM battery.  I had to use an agm or it probably would have toasted by now and the cows would got out.  Sometimes low maintenance is good for me.  Somehow they know when the fence is off.

posted 6 months ago
If we're just going on battery characteristics ... a lithium ion battery is superior to the lead acid/AGM/deep cycle.  Until you factor in $ and then the superiority is questionable..

I haven't made the switch yet, but I'm considering it because:
a) I can use a smaller battery.  LiOn batteries can regularly be discharged at much greater levels ... to nearly 0% while lead acid "should" only be discharged to about a 50% level.  So a 100ah lead acid is for most purposes really a 50ah battery.  You generally gets twice as much runtime from a battery, meaning the battery can be half the ah rating.
b) half the size, and a lot less weight!  I'm set up with boxes to house the battery and fencer, bringing the batteries back to home base to charge.  A LiON battery might be 5 lbs instead of a 60lb+ lead acid, so I can carry it instead of bringing wheels with me
c) doesn't get damaged in freezing temperatures
d) has a much longer life  (once upon a time they were worried about electric car batteries only being good for 5 years and about 80k miles... expectations are now that the batteries are TOO good and will last for 500k-1000k miles, outlasting the car itself)
e) no fussing with water and specific gravity and such.

The analyses I've seen suggest that for regular charge-discharge cycles, a LiOn battery is break even vs lead acid.  But that's something like a ten year horizon and its hard to think of our electric fencing equipment as a capital expenditure instead of an expense.

So I've got an  assortment of 6v and 13v deep cycle batteries.  A pair of 6v batteries (golf cart ones) can run the fencer from something like 2 months - which has proven to be too long because I forget about it.  : )

posted 3 weeks ago
I noticed noticed nobody mentioned Nickel-Iron (NiFe) batteries, which have good deep cycle longevity.  They are super heavy, so not best for moving around, but I bet they could be used for a permanent system.

I also came across this "calculator" which may help with some 12V battery ball-park figures, and the basic math for right-sizing a DC solar electric fence system's batteries and panels.  It has a chart with US state's average daylight hours, too:

"Be excellent to each other"