posted 4 months ago
I now have a box-full of potatoes and no way to store then in a cool cellar-like place, and so have been trying new ways to deal with this temporary surfeit of potatoes over the last ten days or so. I’ve blanched and I’ve potato-saladed, and I’ve made potato bread, and almost a third of my small freezer is now filled with various potato derivatives.
This morning I decided to try making potato soup and thought I’d share the results here photographically. I’ve only made soup from scratch three or four times previously, so it was a bit of an adventure for me.

In part as part of a long-standing (very slowly advancing) writing project I went looking for “Okie” potato soup and found a recipe on Eliot’s Eats.com link
I (sort of) doubled the recipe.

Ingredients:
12 slices bacon, cooked crisp (save fat from bacon) (I ended up just using what bacon slices I had left in a package. This is the first time I’ve ever saved and used bacon fat. Usually I just drain it and throw it away. I know it can be used in a lot of recipes, I’ve just never tried any before.)

About 12, or 3 pounds of red potatoes, cubed, skin on or off as desired. If your potatoes aren’t red, white potatoes are probably okay too, although baking potatoes probably wouldn’t work so well. I very much guesstimated how many potatoes to include

6 cups chicken broth (I used water as I did not have chicken broth in the house) (When I “doubled” the original recipe I started with putting in five cups of water, which more than covered the potatoes and carrot already in the pot. I took out about ¾ cup of water-y broth after everything had boiled for awhile because it still seemed like too much water, although, if you were trying to stretch this recipe you would probably want more like 6 or 7 cups of water.)

4 tablespoons bacon fat (which you saved from your bacon)(I ended up just using all the bacon fat I had saved because I sort of doubled the recipe but didn’t have double the bacon, I had about 3 tablespoons of fat plus what was left in the pan as I reused the bacon-frying pan to make the white sauce portion of this recipe. This was only the second time I’ve tried making white sauce and it went much better than the first time, although it wasn’t very white, probably because it was made in a pan with bacon bits still stuck to it)

6 cups 2% milk (I used a mix of dairy and almond milk because that’s what I had, I matched my milk component to my flour and bacon fat components, the recipe seemed to call for a cup of milk per tablespoon of flour and tablespoon of fat, so I used 3 cups of milk)

I also threw in a sliced up celery stick which I remembered I had in the fridge.

Step One: Harvest the rest of your garden potatoes

Step Two: Marvel over how many potatoes you still have

Step Three: Cook bacon until it’s starting to smell a bit like it’s burning. Remove from heat/pan. I probably should have left my bacon cook a little longer as it wasn’t all quite crumbly and I ended up with a few strips that I had to tear apart.

Step Four: Peel or don’t peel potatoes (and carrots, and celery) depending on your preference. Chop into bite-sized pieces. If you do peel the potatoes, remind yourself that if you really had your stuff together, you would find a use for the potato peels. Then remind yourself that you’re already advancing your skills by making this soup, so don’t get down on yourself as you compost the peels instead of using them for more food immediately.

Step Five: Boil potatoes, carrots, shallots/onions, in broth/water until potatoes and carrots are tender, between 10 and 15 minutes or so

Step Six: Break up your bacon. In the interest of reducing the amount of clean up, reuse your measuring cup to store bacon temporarily. Discover you have about a cup of bacon bits.

Step Seven: In a sauce pan, make white sauce. Heat bacon fat and add flour and whisk until mix bubbles so you know the flour will not taste raw. Carefully whisk in milk to make sauce. Cook to simmer and then remove from heat. Season with salt and pepper.

Step Nine: Serve, or store, or both! Garnish as you wish. (I’m thinking I’ll serve with nasturtium flowers on top of the soup in bowls this evening. Most of what I made this morning is destined for the freezer for awhile)

It took me about two hours to make this soup, but that included clean up, a visit to the garden for onion, and a short dog walk while things were cooking. And it including peeling potatoes, which always takes a few minutes.

I’ve given it a bit of a taste test, and I think it should prove enjoyable! 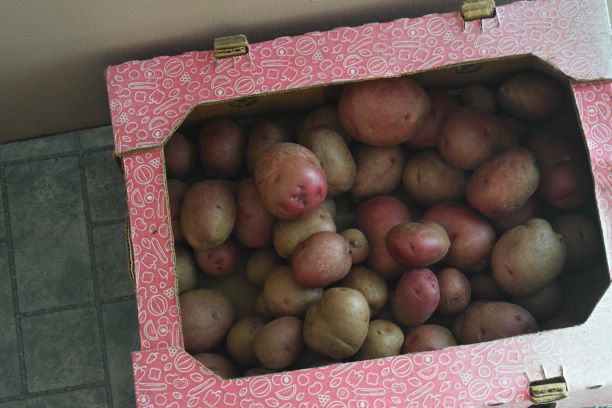 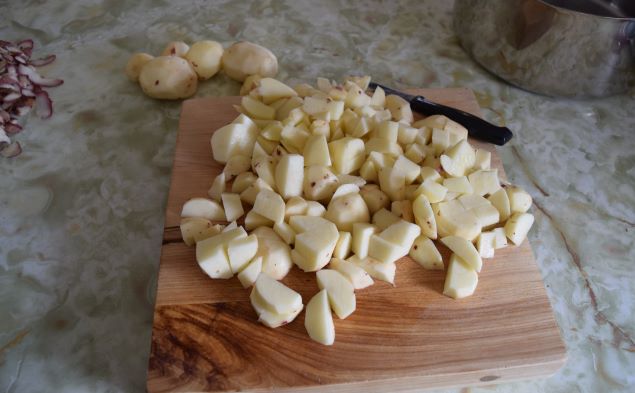 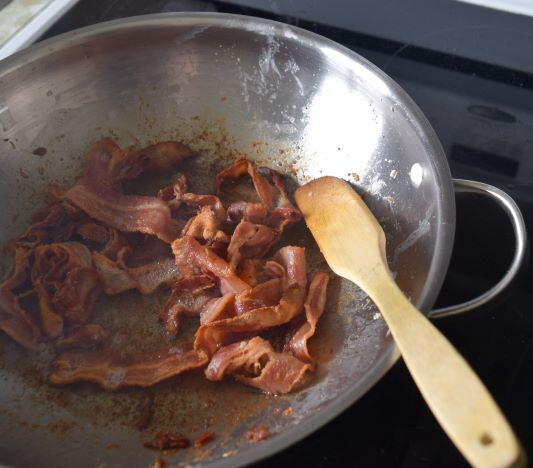 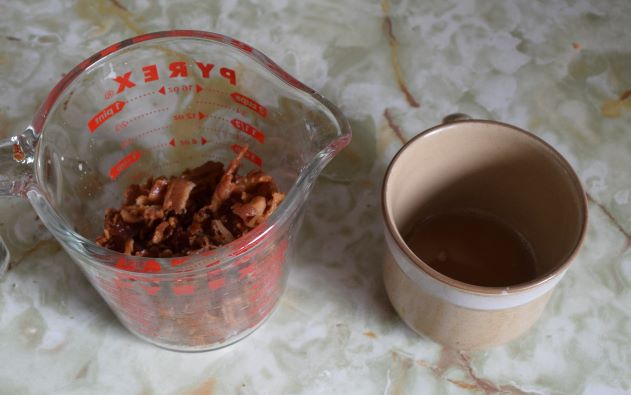 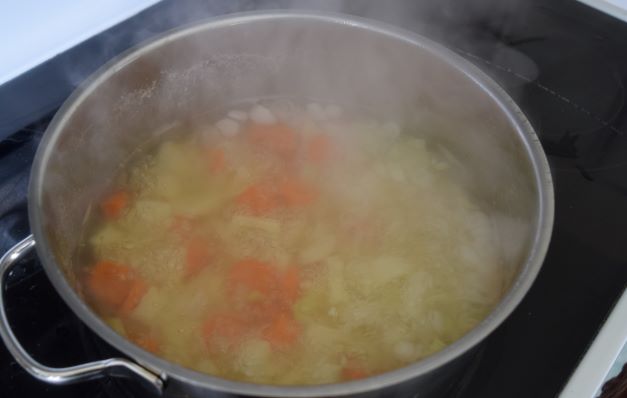 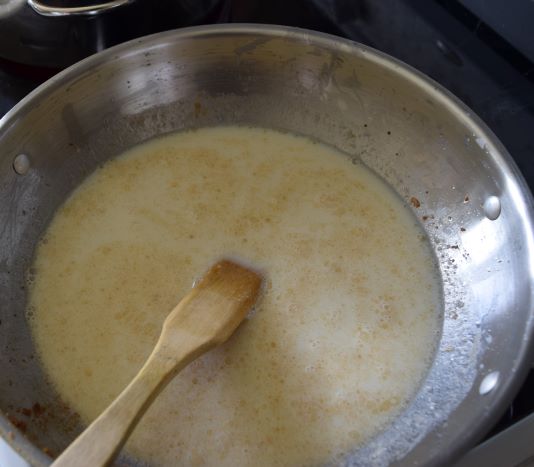 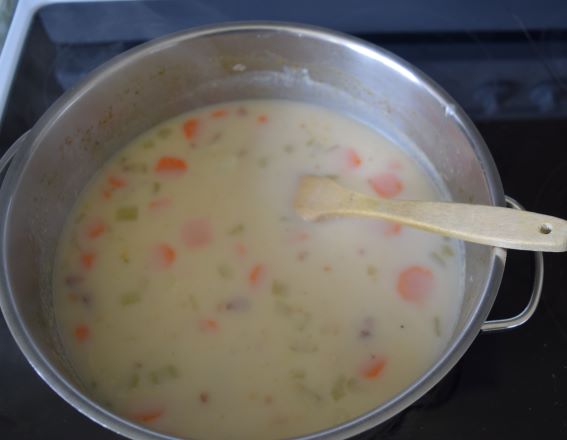 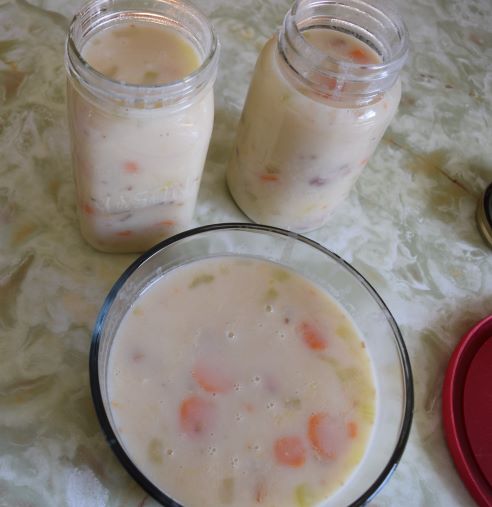