Rattle Snakes: What do you do?

posted 5 months ago
I have seen two rattle snakes near my house in the past ten days. The first was under our deck abutting the house. Our Pyrenees-akbash Wilson went to sleep down there out of the summer heat, and bolted out when the rattle started, then started barking and stomping right above it on top of the deck. I got dressed for the job and moved the snake outside the fence and got it to slither away further with a hose. The second was a smaller snake in the brush outside the fence and above our driveway. Both alerted us with rattles well before conflict occurred. I know that killing snakes that rattle in warning has shown in a Washington State University study to basically breed snakes that don’t rattle for humans. We also have pretty hardy dogs in Wilson and a Doberman we are fostering that was raised on the property. However I have considered killing the snakes and feeding them to the dogs, cooked and beheaded, of course. I am torn. I’d feel horrible if we lost a dog to a snake, but wonder if killing one that alerts us to its presence  really reduces the risk. Your thoughts?

posted 5 months ago
You might want to check local regs; they are often a protected species...

It may be an advantage to have the dogs snake trained to alert when they are around, for everyone's safety, as you are obviously in snake territory, there will always be more...

Lastly, reptiles have a very slow metabolism. A snake that has been "killed", can still bite, even a beheaded snake, so IF killing is an option, be cautious.

Leora Laforge
pollinator
Posts: 155
Location: Saskatchewan
38
posted 5 months ago
If you have 2 snakes there are more nearby. Killing these would leave a gap for more to move in, who might not warn you nicely. I think your first step should be to make your property less attractive to snakes. Get rid of rock piles and other places snakes find attractive to hide. If you can get rid of all these spots the snakes might just move out, if they don't, then consider killing them. Hopefully the yard would be unattractive enough so more don't move in.
John F Dean
master gardener

posted 5 months ago
I agree with the above post. Go after the habitat.  Of course, do so very carefully.  Moving a rock can bring a surprise.   Here in southern Illinois, we have had an exceptional amount of rain that has led to a number of poisonness snakes we dont normally see.

eliminate food sources and snake friendly habitat for them. if there are no rats or birds or other things they like to eat they will move on.
your probably luck they are rattlers and not copper heads, copperheads don't give warning before striking.

I've read, heard, & been trained that rattlesnakes mate for life. I've seen plenty in the wild but rarely more than one except in severely infested areas. But still, it seems safe to assume if there's one there will be more around. They are rather shy & generally avoid people when possible. Like with many other potentially dangerous critters it's the chance surprise encounter that is the most concern.

I've heard they really don't like cedar chips & will not cross them but have no first hand experience with that. It's worth looking into though.

A friend had a serious rattlesnake problem. Other than very non-permie methods the most effective method he used was homemade traps. It consisted of some pet store mice in a small cage. Surrounded by a wide barrier of bunched up plastic chicken wire. The snakes would get entangled in the mesh. 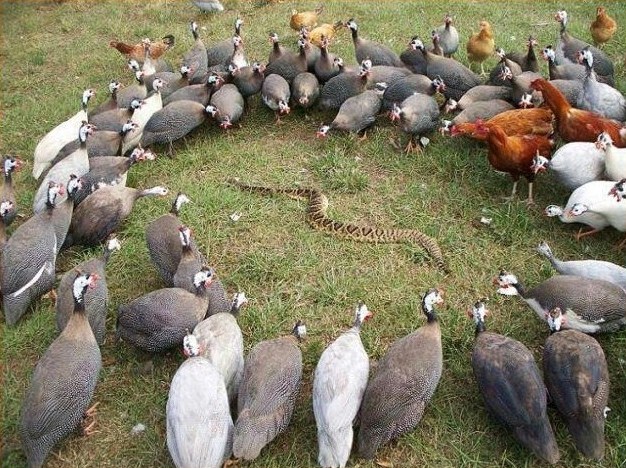 posted 5 months ago
that is how we work here, remove the habitat they like and maybe make your presence known a bit more (in your snake boots, of course!). If they were in the brush and you can clear that area, clear it, if not see if you can make a point of going out into that area a few times a day. This is the main reason why I don`t have compost piles anymore- it`s too attractive to snakes, when I got rid of them the snakes didn`t come back either.
Ben Zumeta
pollinator
Posts: 733
Location: NW California, 1500-1800ft,
149
I like...

posted 5 months ago
Thanks y’all. I really don’t want to kill any wildlife, especially predators that keep ecosystems in balance, but I do love my Wilson more than anything! I agree that killing snakes that rattle makes a vacuum for those that don’t. I think they have been attracted by the mice/pack rats that invaded/exploded while the house was unoccupied by a cat during our move. If you look at these pics or my post on the “Show Me Your Gates” thread, you may see why removing rock piles is not really an option.  I don’t know how else I could hold up the fence other than rock jacks.

Anyone know where to get a few hundred gopher, rat or king snakes (they eat rattlers)? 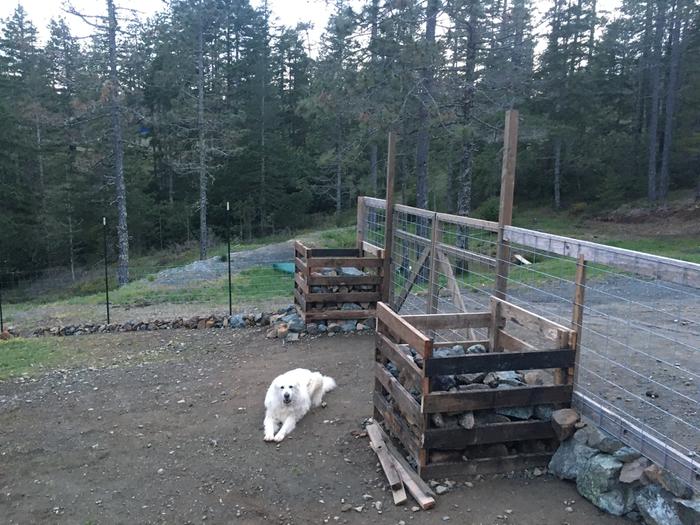 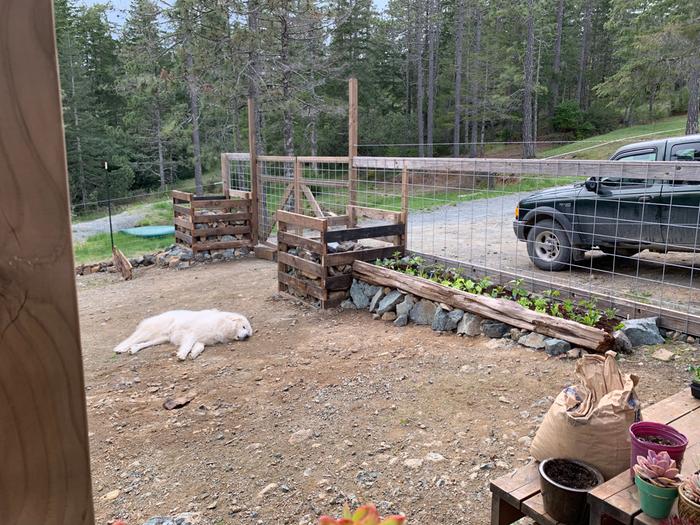 Hi Ben! I think that you were thinking of killing the rattlesnake is smart. Just to let you know, there are two types of snakes, pit viper and dry bite. Pit vipers are the venomous snakes and rattlesnakes are one of them! posted 5 months ago
I thought this would be good to post here:

There are some common misconceptions about the treatment of rattlesnake bites. While waiting for the ambulance, here’s how to minimize your risk:

Don’t raise the area above the level of the heart. If you do this, your blood containing rattlesnake venom will reach your heart more quickly.
Stay as still as possible, as movement will increase your blood flow and the venom will circulate faster.
Remove any tight clothing or jewelry before you start to swell.
Let the wound bleed, as this may allow some of the venom to be released.
Don’t wash the wound, as your medical team may be able to use some of the venom from your skin to more quickly identify the correct antivenin.
Place a clean bandage on the wound.
Try to remain calm, as anxiety and panic can increase your heart rate, which will cause the venom to spread.
If you begin to experience signs of shock, try to lie down on your back, raise your feet slightly, and keep warm.
Don’t cut the wound, as this doesn’t help and you could cause an infection.
Don’t try to suck the venom from the wound, as you then introduce the venom to your mouth as well as introduce the bacteria from your mouth to the wound.
Don’t use a tourniquet or apply ice or water.

From: https://www.healthline.com/health/rattlesnake-bite
Personally, because I've heard that rattlesnakes are endangered and because they are a valuable part of the ecosystem for their rat catching reputation alone, I was going to suggest you find ways to co-exist, but I searched for the cost of anti-venom in the US and was floored! It still is possible that they've moved into your area due to the increase in rat/mouse population and once the food source is removed, they'll go elsewhere, so I'm equally torn as to the best solution. There may simply not be a "best solution", but just several adequate responses which you will weigh for your specific risks and benefits.

posted 5 months ago
I always relocate snakes - you can debate the ecological value of this, one way or the other, but a trash picker and a lidded five gallon bucket works for me; drive it out to the closest(not TOO close) national forest or wildlife refuge, dump it out, and exult in your conservation prowess

Experimenting and growing on my small acre in SW USA; Fruit & Nut trees w/ annuals, hoping to get Chickens, rabbits, and in-laws onto property soon.

posted 5 months ago
Fortunately, I have never encountered a rattlesnake where I live now ( I have had them on other property). My most recent encounters have been on their turf when I have been hiking in the southwest.  They have always been polite and given me ample warning.  I have always done the same for them.

posted 5 months ago
I try to just drive them off with a few rocks or whatever. Lord knows I need the help with the mice and voles but I have killed them before too. I shot two snakes (with one shot, i might add, haha) because they were together, tip to tail during mating season and edging up under my house. I don't need a snake den as I have kids and a really dumb dog running around.

posted 5 months ago
Funny this topic popped up just after I noticed a sign in the local farm store/gas station window offering to buy rattlesnake skins at least 3' long for x$ per foot.

Last fall the UPS delivery man killed at 5' one on the dirt road running along my property, but I haven't actually see a rattler yet.  Did find a dead blacksnake of some sort tangle in my chicken wire.  That's the first snake I've seen on the property in a year.

When I was a kid I collected snakes (proved to be a great way to keep grandma out of my room!  She found out all those paper bags stapled shut along the wall had snakes in them...), but poisonous ones... no.