posted 10 months ago
I sometimes have a thought, but when they’re weird I like to tell you folks.
Wood stoves put a nice hot breeze out of the stovepipe. What if there was one, or several mini turbines inside the pipe hooked to an external generator? I doubt it would be much trickling into a battery bank but when off grid it all counts.
I’m thinking something like this turbine but on its side.
5662A6C9-343D-496B-B1F6-39EE7484855E.jpeg

posted 10 months ago
I think it would take a massive furnace to generate enough draft, and it would take a very efficient turbine to capture what little energy is there. Also, any energy you take from the draft will result in pushing exhaust back towards the inside of the house. Many people have trouble getting enough draft with a clear flue. The turbine will also accumulate any soot or creosote passing over it.

posted 10 months ago
Thank you Jordan.

But there is an actual, existing "hot air engine" that uses hot air from a fire and a cooling sleeve to generate useful rotational torque. I saw one in Nova Scotia, at the fisherman's museum in Lunenberg.

But there is an actual, existing "hot air engine" that uses hot air from a fire and a cooling sleeve to generate useful rotational torque. I saw one in Nova Scotia, at the fisherman's museum in Lunenberg.

Douglas Alpenstock
pollinator
Posts: 1317
Location: Canadian Prairies - Zone 3b
345
posted 10 months ago
Yeah Tj, that's it, a simple version of a Stirling engine. Uses the heat differential to create torque. I guess I always think of the super refined NASA versions when I hear the name. But these were used to pump water before local electricity was available.
Jeremy Baker
pollinator
Posts: 401
Location: Nomadic
36
posted 10 months ago
Ive wondered about a cloche row cover going up a steep South facing hill. One heck of a draft would be induced by hot air rising. If the tunnel lead to a tall chimney with a propeller in the top it might spin. I read a article long ago about experiments to see if a tall chimney draft could generate electricity. The chimney was very tall. It didn’t produce enough power to make it worthwhile. But it might make a great food dehydrator.
Scott Stiller
pollinator
Posts: 858
Location: North Carolina zone 7
175
I like...

posted 10 months ago
Thanks for the awesome response Jeremy!
This picture is what got my mind on the mini turbines. I made this three years ago to heat a greenhouse I planned to build. The greenhouse never happened and this contraption has some issues now. I cut several feet worth of various dimension pipe. Then screwed it all together onto a removable stand that sat snug inside the box. On the bottom back I drilled holes to match the dimension of the outflow and stapled wire mesh to keep mice out. I painted to whole thing black and sat it in the sun. With direct sunlight I achieved a steady 140 degree flow out the top. Since the greenhouse wasn’t built I used it to dry hickory for my friend’s smoker. After getting tired of looking at it I put it by an outbuilding away from the house. Now it gets very little direct sun but you can still feel the heat rise. 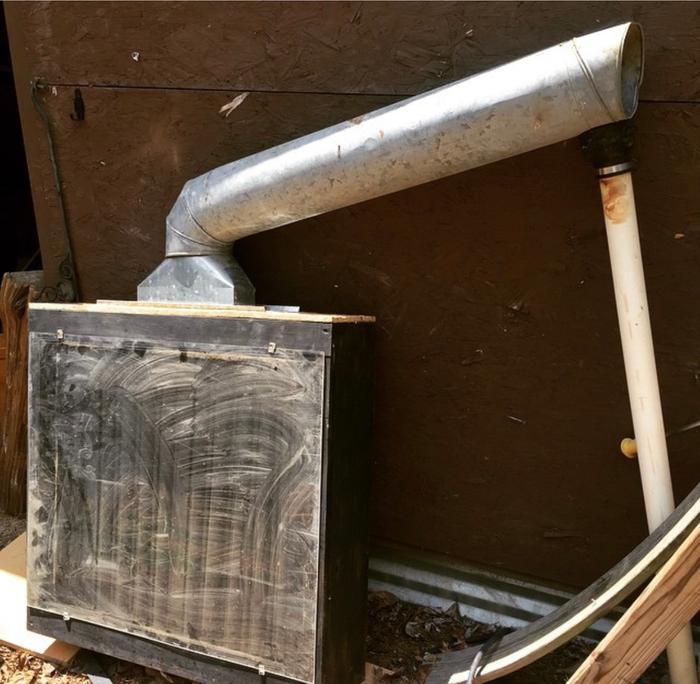 posted 10 months ago
Imagine if you put a bigger diameter pipe around the hot chimney  pipe.
Where the chimney pipe enters the building,  we build a tee into outer pipe.
So when the air in between the inner and outer pipes gets hot,  it should begin to draft, and we could set up a turbine at the tee intake.
Would this shroud create a net cooling effect, aid in insulating the inner pipe or would the effect be a wash?
I'm not sure.

If we are concerned with lost draft,  maybe use the turbine with a biochar making operation.
The basic 55 gallon jolly roger TLUD just vents lots of hot exhaust  into the air, so slowing the draft some probably won't be a big deal.
Actually, I wonder how much you could slow the draft in a TLUD and still get a clean burn?

It occurs to me,  if the shroud I described above can create a strong  draft , it could be used to set up airflow in a dehydrator , an earth tube,  or swamp cooler.
It's essentially like cooling with a solar chimney, but using wood heat instead of solar.

Instead of a rotational turbine maybe a ribbon style generator could be good.
Surround the chimney with permanent magnets and suspend a stainless steel ribbon in the exhaust .


Eating Bindweed
Eating Buckwheat Greens
Paul explains why I spend time here,better than I could myself.

Jeremy Baker
pollinator
Posts: 401
Location: Nomadic
36
posted 10 months ago
Interesting ideas. A friend wants to setup bio char production with me to augment his soil fertility on his property. I like the idea of cogeneration. He lives off grid so could use the power. And he has a lot of wood.
Kenneth Elwell
pollinator
Posts: 636
Location: Boston, Massachusetts
207
3
I like...

Jeremy, there's a mention in solar updraft tower for a mountainside greenhouse as the chimney!

The size of the fire (strength of the draft) seems to determine the "work" that is possible, turning a roasting spit is not very demanding (torque, constant/consistent speed, or fast...) as spinning a generator might be.
But that is useful work, as are those stovetop heat-powered fans.

posted 10 months ago
I’m completely down with Jeremy’s suggestions. I’d love to try all of them but I don’t have the equipment. I do, however have lots of black pipe. Pex, PVC, and corrugated. I also happened to live on a steep, south facing hill. I’ll be trying it this winter. As you can tell it’s a power company right of way. I went through all the proper channels to get on their no spray list. They even sent signs that their workers would recognize. I built terraces and planted. Later that summer they came through and sprayed while I was at work. There was enough overspray that my veggies were hit. That was the last time I planted there.
I’m alway up for experimenting so we’ll give it a try! 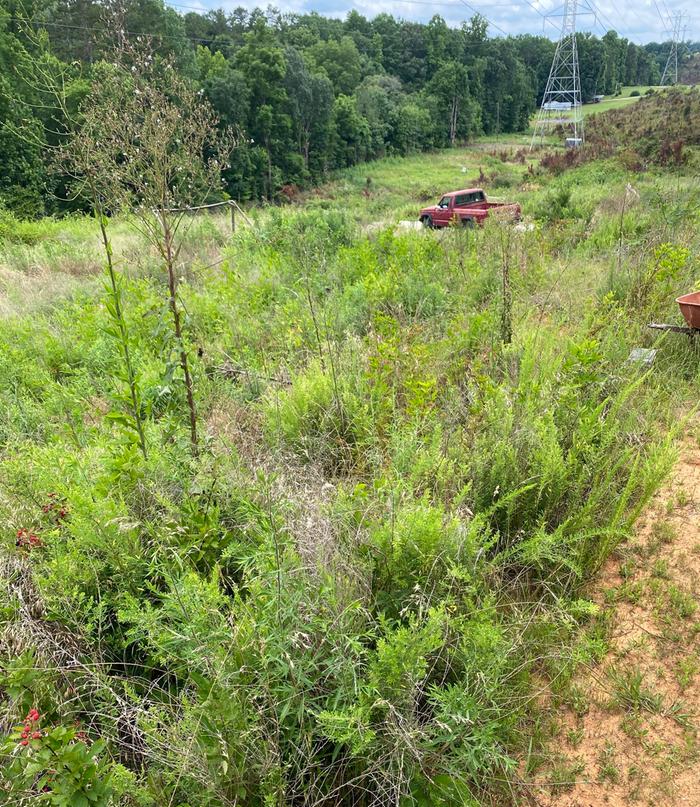