Chad Johnson
Posts: 46
1
posted 8 years ago
Has anybody came up with a way to bear proof beehives w/o using a high voltage electricity fence?

I'm using a top bar hive and am thinking 2-3" thick wood with metal on the edges and bolted to cemented posts.

My other option is a cattle panel cube and cemented posts and grow viney things on it but being in one of my gardens, the aesthetic seems a little grotesque.
Kota Dubois
Posts: 171
4
posted 8 years ago
My old neighbour built what he said was the best bear proofer for his hive. A rectangular box made of 6 inch logs for its edges and then used chain link fence to enclose the box. The hive sat in the middle over a foot away from the fencing on all sides.

posted 8 years ago
Someone, possibly on this messageboard, put them on his roof....

Kota Dubois
Posts: 171
4
posted 8 years ago
I've been thinking about doing that in the city.

Tyler Ludens wrote:Someone, possibly on this messageboard, put them on his roof....

could also build a bee house for multiple hives. moderates the temperature, too, which the bees appreciate. should be relatively easy to make such a structure bear proof.

Chuck Freeman
Posts: 116
Location: Southcentral Alaska
1
posted 8 years ago
a lot of camp grounds in Alaska use electric fences. I have never heard of anyone get bothered camping behind one.

Chuck Freeman wrote:a lot of camp grounds in Alaska use electric fences. I have never heard of anyone get bothered camping behind one.

I tried to find Paul's Beehive protection.   Couldn't find it.   But found something that seems similar to your suggestion on Youtube.       I didn't know that solar fences would zap bears at night.    It is Sunday as I type this.   I plan to call Premier and find out if they have something appropriate for my situation.   If so, it might solve 2 problems I have with bears.   The beehive and my melon patch.   I have given up growing any type of melon since bears LOVE them.

posted 4 years ago
I had an old chainlink dog enclosure around my hive a few years ago to keep out the bears. It began as a joke because there had not been any bear sightings around here, but within months of putting the fence around the hive there were several bear sightings within a few miles of my house! Coincidence; of course.

The drawback to the enclosure we had is that the space afforded to work on the hive was very limited, not to mention it wasn't a very 'natural' sight. The bees could come and go freely through the fencing, and we laid down plastic and mulch to block the weeds from growing on the interior.

It's very important not to allow weeds (especially the tall grasses with those razor hairs) to grow in front of the hive; bees are kinda clumsy sometimes and can lacerate their wings on the foliage if it grows into their flight-path.

When we're ready to keep bees again, we'll go with an electrified enclosure of some sort. I want to use solar-charging battery systems, but will need to keep them well away from any foliage because it can short out the fence and drain the battery. My neighbor has had bad luck with that, and so abandoned the solar systems. Unlike a hard-wired fence, once that battery is below a certain charge, that fence is nothing but a wire.

Back to bears; I've heard anecdotally from some apiarists that a bear will test out electric fences a few times with their muzzle, then will turn 180 and bulldoze a flimsy fence with their rump...
Probably a good idea to have a thicker gauge wire secured to some serious posts to prevent this.

(1)     Use sturdy fence posts not less than 8 feet high and barbed wire not more than 1 foot apart (6 to 8 inches is better).  Space posts not more than 8 feet apart (4 to 6 feet is better).  Black bears are very strong and stubborn = determined.  Do not underestimate their ability to create havoc.  The average black bear can rip 1 inch thick solid wood shutters off a summer cabin like the wrapper from a candy bar.  The least costly defense against black bears is a good brace of LARGE dogs = Great Pyrenees or something similarly massive (about 150 pounds).  Bears avoid dogs and they especially dislike being "hounded" = double teamed by 2 or more dogs.  1 dog will give alarm but it takes 2 or more dogs to fend off a hungry bear.

(2)     If you have an old barn or similar structure you can make a "Bee Loft" to keep your hives safe.  Remember to provide generous cross ventilation to keep hives from overheating.  Also, remember that bears can climb, so take suitable precautions.

posted 4 years ago
I am considering trying this option.   I have a forest behind me with 75' trees.    I am not a bee expert by any definition, but I do not see electric fencing keeping my bears away without a lot of maintenance on my part.   Did I mention I am a lazy bum?   I plan to wrap the 2 trees in lose sheet metal if the bears attempt to climb the trees. 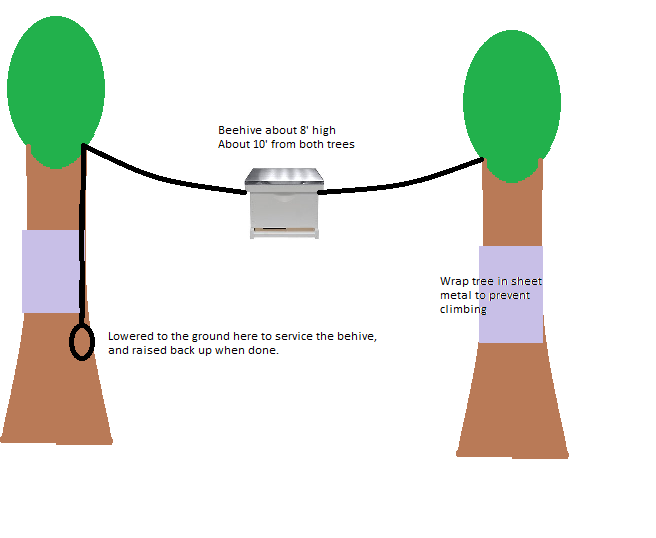 David Livingston
pollinator
Posts: 4328
Location: Anjou ,France
243
posted 4 years ago
I have seen pics of hives in Turkey that are high up trees and when you want to work on them you lower them to the ground .
David