hair in a zero waste system

posted 8 months ago
I understand that hair does not have to be cut and that even if one chooses to cut their hair it does not create a great volume of waste but I am looking to for a useful part of the ecosystem or community that cut hair may be used.


If we are to have zero waste then how do we make this a resource?

posted 8 months ago
It works well in compost.

David F Paul
Posts: 34
Location: Middle Tennesee zone 7b
3
posted 8 months ago
Worms absolutely love hair and waste wool, it is slow to break down, so if the sight might bother you or someone I suggest covering it with something more appealing. I generally use it as mulch. I have also spun human hair into wool (it must be at least 2-3 inches long) but you would need a lot of hair to make a large project. The hair I spun ended up being made into a rug, it is not very soft (think a texture similar to plastic bailing twine) but it is very durable so it worked well in that application.
Clay Bunch
pollinator
Posts: 164
Location: Ashland Ky
63
I like...

posted 8 months ago
I have read an article suggesting that hair can be used to replace fiberglass even to make structural beams but my question is more toward a human scale backyard use.

posted 8 months ago
David thats awesome. I have seen it used in making mats to protect tree roots but I've not thought of actual clothing or rugs.

I guess there is a lot of taboo associated with using any human product especially in something that people touch and use with skin contact.

I have red wrigglers! I was unaware of their taste for hair. Ill have to give that a test run.

posted 8 months ago
I am also thinking of leaving it out for the birds to build nests!

Douglas Alpenstock
master pollinator
Posts: 876
Location: Canadian Prairies - Zone 3b
220
posted 8 months ago
I don't know about human hair, but my native birds absolutely love the inner downy hair that my hounds shed several times a year (and shed, and shed, and shed ...). When I clean out the nest boxes in spring, it's pretty obvious where they got the "good stuff." I defer to their wisdom.

As for human hair, it's so darn tough and long-lasting that I wonder about using it as a binder is various non-cement conglomerates. Or do you just throw it in with a biochar burn?
Clay Bunch
pollinator
Posts: 164
Location: Ashland Ky
63
I like...

posted 8 months ago
I like the binder idea added into cob or Adobe. It would be an interesting experiment. I'd steer clear of using it for rocket tech until tested. What would be worse than spending the week installing a rockety thing in your home only to light it and have the house smell of burnt hair ha

Clay Bunch wrote:David thats awesome. I have seen it used in making mats to protect tree roots but I've not thought of actual clothing or rugs.

I guess there is a lot of taboo associated with using any human product especially in something that people touch and use with skin contact.

I have red wrigglers! I was unaware of their taste for hair. Ill have to give that a test run.

Yeah I'm not sure why the taboo with human hair, it's washed regularly, lice is the only real thing that is transmitted from it and that's only really a risk if it's going near your head, and can easily be avoided if you wash it before you spin it into a hat (it would not be a very comfortable hat unless you made it more spun in the fashion of linnen and wove it very tightly, could probably make a good sun hat with something of the consistency of like a straw hat) it sure is nasty to dig out of the shower drain, maybe that is why people are grossed out by it. If you have ever processed raw wool from sheep or llamas, you'd know it's often caked with nasties like dung and urine...

Also another thing I forgot to mention, it can be donated to places that make wigs for people with cancer but I think they only accept stuff over 6 inches or so.

If using it for a mulch, it will mat down very thick and stay that way pretty well if you get it wet and step on it a little bit, or if you put another slightly moist mulch material on top of it. I tend to put everything in my mulch ala Ruth stout, I quit doing compost piles and just kinda throw anything compostable under the grass clippings I have mulched my garden with, and the garden seems to like that, and I have saved so much time, space, and energy by not worrying about turning and getting the right ratios of green and brown and water content... I can't even generate at one time enough material to run a good successful hot compost pile, the summers have me overloaded with green material and not enough brown and the winters have the opposite, and I don't want to be out in the cold and wet turning compost anyways.

I have red Wiggler's as well. I treat hair as a brown or bedding, but don't reccomed using only hair for bedding. Like I said it doesn't break down very quickly, but it will eventually, and they love to wriggle around in it :) I also noticed a lot more of the younger worms in it
William Bronson
gardener

posted 8 months ago
It's a shame the hair from  hairstylists is so treated with chemicals.
The hair from a dog groomer might be less chem-nasty .
I have taken dog hair ,  rubber banded it into the corner of a cloth and run it through the washing machine.
My own tightly wrapped hair would make for great pillow stuffing, if only there was enough of it!

posted 8 months ago
I'll be doing a largish lime plaster project this Summer. I'm considering going to the local barber shops and seeing if they'll keep all the cut hair for me for a month or so, it will make a perfect fiber fill!
Doesn't concern me if it's dyed or chem treated, it will completely encased in limestone once the plaster hardens. 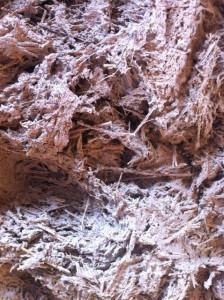 posted 8 months ago
Chris I would really like to see more about your project as it goes.

I believe the local barber would probably be a good place so long as he's the owner. I fwel like there might be more regulation or policy to get in the way if it were a corporate  chain. I know that when I collected coffee grounds for a composting experiment that Starbucks mostly told me they weren't allowed to give it away then another location said I could have it but it will have other trash mixed in and ill have to get it from the dumlster but a local coffee shop actually gave me a gift card for coming and picking the stuff up.


I wonder what the r value of hair would be. It usually keeps my face and head pretty warm. We could stuff the walls of a shed with it for insulation little by little but that would probably be done better by collecting large volumes from a barber of stylist like you mentioned.


I just thought that perhaps it could be used to make fine paintbrushes for artists. Now that would be an intimate gift for an artistically inclined loved one. Brushes made of you by you.