how to render lard


Suzy Bean renders lard in her favorite way. And she talks about some other lard rendering techniques that she has tried and doesn't like as much.

The way she likes: the stove top "dry method" (no water) in a cast iron skillet. She says a stainless steel pan would be good too. Low to medium heat.

crock pot: the cracklins don't crackle. they're mushy. And there might be water in the lard

oven: it's fine, but it takes a while

the wet method in a cast iron skillet: fine, but why bother when the dry method works so well

Cut the fat up and toss it in the skillet. When the pork rinds look yummy, you're ready. take the cracklings out and pour the liquid lard into a mason jar through a cheesecloth. Done.

Why do this? Because the fat does not store well. It will go nasty in a few days. The lard will keep for months or even years. Suzy confesses that she had some fat go moldy once.

I do some movie magic time lapse fast forward stuff in a coupla spots. I show the fat rendering quickly and I show the liquid turning to a solid quickly.

And no orangutans were harmed in the making.

Great editing, and I love how you got the logo in there.

Kyle Williams
Posts: 53
Location: Olympia, WA
7
2
posted 10 years ago
So can I safely consider my bacon squeezin's lard? I feel like there can't be much of a difference between the lard that was rendered in this video, and the bacon grease that is left in my cast iron after breakfast. If I pour that through a cheese-cloth and store it similarly, will it keep just as long?

I'm paleo and I tend to end up with quite a lot of bacon grease, and I'd like to figure out if there is anything extra I need to do to effectively and safely store it longer term so I have time to use it up.

Not exactly. Bacon has been cured, and retains the flavor of the curing - whether salt, brown sugar, maple syrup, etc. Lard is much, much more "plain" tasting and more suitable for pastries and overall cooking where you might not want a bacon flavor. (Weird as that may be, not wanting bacon flavor!

Also, in my experience lard gets a lot harder/firmer in texture when cooled than bacon grease. Hence the beauty of using lard (NOT bacon grease) for pastry.

Though I do recommend this discussion about bacon fat mayo and using bacon grease in place of mayo in deviled eggs and other places. Yum.

Kyle Williams wrote:<snip> I'd like to figure out if there is anything extra I need to do to effectively and safely store it longer term so I have time to use it up.

Grease keepers like this one from Pantry Paratus are awesome. I have a ceramic one with a stainless mesh strainer that sits inside the lid.

Some folks are fine with keeping bacon grease on the counter (maybe this is where those curing agents help prevent spoiling more so than with lard), but I keep my bacon grease in the fridge just to be sure.

Kyle Williams
Posts: 53
Location: Olympia, WA
7
2
posted 10 years ago
But as far as storability (not sure if that's a word), they're on par? I don't make or eat a lot of pastries, and usually use my saved bacon grease when frying up some other meat, or roasting vegetables. Will bacon grease keep as long is really what I'm wondering, or do I have to do some kind of secondary rendering?

Sorry, I wrote and posted the above only about a minute after your 2nd reply. I definitely will look into getting a strainer like that. And so far I keep my bacon grease on the counter. I'll keep experimenting, and if I "find out the hard way" I'll let people know.
Posts: 177
Location: Bay Area, California (z8)
posted 10 years ago
I render in the slow cooker. She mentions it didn't work for her (cloudy, no cracklins), but she apparently used water... unnecessary. Just dry-render the chunks. And then you don't need to stir, at all. When most of the lard is rendered, pour it off and keep rendering. The first pour of lard is beautifully clean, no impurities and clean white, clear even in liquid state. Further rendering gets you cracklins and not-so-clear lard, perfect for high-flavor dishes like browning meat.

I like the simplicity of this method.
duane hennon
gardener

when butchering several hogs at the same time, production is important

these could probably found at yardsales
my mom used it for chickens (large family, more than one at a time, or a large turkey
the oven in the stove was for bread , pies and cakes

Posts: 7926
Location: Currently in Lake Stevens, WA. Home in Spokane
333
posted 10 years ago
Those electric roasters are also great for those hot summer days...set it up on the deck.
Beats the Hell out of firing up the kitchen oven for hours on end.

Be Well and Happy... It's more fun!
Jackson

posted 7 years ago
I'm brining attention back to this thread because I am about to render some back fat from a pig that I helped butcher a few nights ago. I don't have cast iron unfortunately, so I am going to try the stainless steel method. Will report back with my results!

posted 7 years ago
The year my father shot a fat moose (those are rare) just a mile from town (so my mom was there for the skinning-and-gutting) she collected a lot of leaf fat from the intestines. She rendered it on our wood cook stove in a cast iron dutch oven (no water). Moose tallow turns out to be very good stuff if you can get it. We children thought the cracklins a delicious marvel.

posted 7 years ago
A few months ago I purchased some pastured beef from a friend. The country butcher offered some "dog bones" which were the leg bones sawed into 1 foot chunks, with most of the flesh removed. I simmered them in water to make a (very weak) stock, and discovered almost a quart of fat had come off of 3 bones.

I skimmed the fat and heated it in a pan to remove the water. It's lasted well and makes a great grease for seasoning pans. We used it for biscuits once. Anyone else have experience with using leg bone fat?

posted 1 year ago
I wanted to add to the lard making.

I used a crockpot, I started with only leaf lard. I cut it up to about 1/4 inch pieces. which than went straight into the crockpot with no water.
The resulting "cracklins" were crispy and golden.

The lard turned out nice and white.

It was in the crock pot for about 5 hours. 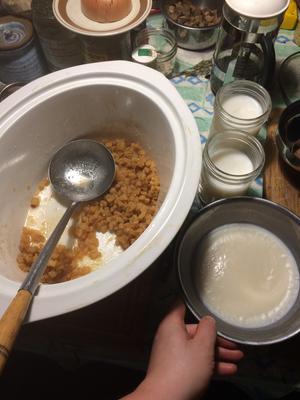 I just made popcorn and added the cracklins to the popcorn along with cayenne pepper, garlic salt, seal salt. Wow what a rich dish! 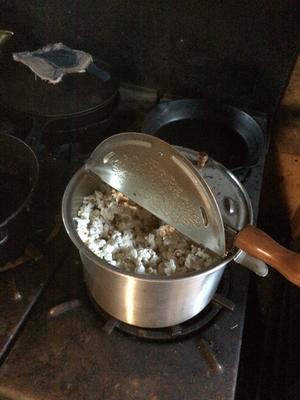 It is a privilege to live, work and play in the traditional territory of the Salish People.
Better wood heat! -- 177 Hours of PDC and ATC! -- Mike Oehler's Low Cost Underground House!
All about Permies, including Tutorials -- Raven Trust

Julie Dean
Posts: 1
posted 1 year ago
Wondering if this string is still active. I need some advice. I rendered my leaf fat from our organically raised piggie yesterday. I expected the snow white color in my jars but instead got beige or tan. I rendered in my roaster on low (under 150, closer to 100 degrees). I continued to cut & smash the pieces. I poured it into jars once only the cracklings & some meat were left. Over 24 hours. I strained through cheesecloth. Did I do something wrong? Heated for too long? Can I still use it for baking?
Signed, 1st time hog fat renderer.
M Broussard
pollinator
Posts: 184
Location: North Island, New Zealand
202
I like...

Julie Dean wrote:Wondering if this string is still active. I need some advice. I rendered my leaf fat from our organically raised piggie yesterday. I expected the snow white color in my jars but instead got beige or tan. I rendered in my roaster on low (under 150, closer to 100 degrees). I continued to cut & smash the pieces. I poured it into jars once only the cracklings & some meat were left. Over 24 hours. I strained through cheesecloth. Did I do something wrong? Heated for too long? Can I still use it for baking?
Signed, 1st time hog fat renderer.

If it is tan or buff coloured when it's solid, you've probably overheated it slightly. It'll still be perfectly fine for savoury baking, but may impart a bacony flavour to sweet baked goods, so I'd advise against using it in gingernuts or brownies.

Adding water to the initial fry is a good way to heat up the chunks of fat without the risk of browning. Using a crock pot gets me a lovely snow-white lard for the first batch, and then I fry the remainder down and get a darker lard plus the cracklings. I also find I have good luck if I run the lard through a mincer prior to rendering it, as there is more surface area for the fat to migrate out of the chunks that way. Here are two ways to get white lard that can be substituted 1:1 for butter in any baking:


Crockpot rendering
- Place the cubed or minced leaf fat from 1-2 pigs into your crockpot. Add enough water to cover the lard to half its depth
- Slow cook for 8+ hours--the chunks of fat should reduce significantly in size and be floating in melted lard. There will still be water on the bottom of the crock. If the liquid is cloudy, let it render longer--it should be relatively clear.
- Use a sieve or muslin to strain out roughly 1/2 - 2/3 of the fat while pouring cupfuls of hot lard into pre-warmed, sterile jars.
- Store the strained chunks in a bowl while processing the rest. Do not reach into the bottom of the crock, where there may be remaining water.
- These will seal up and last for some time with a canning jar lid and no additional processing.
- Return the chunks to the mix, and fry in a skillet or roasting pan until the bits are crunchy as you have done. Strain into hot jars.

Oven rendering
- Placed the cubed or minced leaf fat into your roasting dish. Add enough water to cover the lard to half its depth. Make sure the dish has its lid on, though!
- Roast in a moderate oven (your 100-150 C should be ok here) until the fat has shrunk and is floating in clear liquid
- Use a sieve or muslin to strain out roughly 1/2 - 2/3 of the fat while pouring cupfuls of hot lard into pre-warmed, sterile jars.
- Return the chunks to the mix, and either return to the roasting pan or fry in a skillet until the bits are crunchy as you have done. Strain into hot jars.