Peter Apalais
Posts: 5
posted 9 years ago
I have been tinkering with a rocket stove. This is the mach 2 version. It is better than the mach 1 version, but is still not what I think it should be like.

Now it did burn and got very hot. So hot infact that the inside of the chimney was glowing red/orange, definantly not a dull orange. I guess it was around 600-700 degrees? Which would seem about right because I think it would have melted a soft drink can.

My problem that I have is that to make it burn the best I have to keep scraping out the hot glowing coals all the time. This allows more air to get sucked in.

I was not able to get water to boil, well it had those tiny little bubbles. It did not boil violently.

Interesting though, later on in the night I put a nearly 2" thick x 1 foot long tree branch down the chimney and within about 30seconds I had a massive foot and a half flame roaring out of the top. So I put the pot back on with the water and it
got the water boiling in no time. What a difference that made loading the timber in the chimney.

But, still after that died down I added more wood in the top, but because of the leftover glowing coals it did not have the same effect.


I noticed that the whole metal section was glowing on the inside all the way up until where that bucket is welded on. Now I wonder why it stopped there? I did run out of vermiculite and the top bucket is not filled with anything. Maybe this lack
of insulation did not allow the heat to travel up the metal further?

SO I was thinking to chop off the bucket section as I know it glows read hot just about all the way to the top there. This will give me a chimney length of around 500mm (bucket is 250mm).

This should place the bottom of my pot at a place much hotter than when it was 250mm higher up. So my water might boil there then??

Is a rocket stove meant to have ll those glowing coals at the bottom? Are they supposed to burn out or what?


In the photos you can see.

The overall unit.
The wood feed area and all the coals.

Any thoughts or suggestions to improve it at all.

And how hot should the outside of the drum get? I have it filled with the vermiculite and When it is burning hot you can only hold you hand on it for a second or two. Does that sound about right?

Is there a calculation to workout what internal dimensions of the steel needs to be and what length the chimney height needs to be? 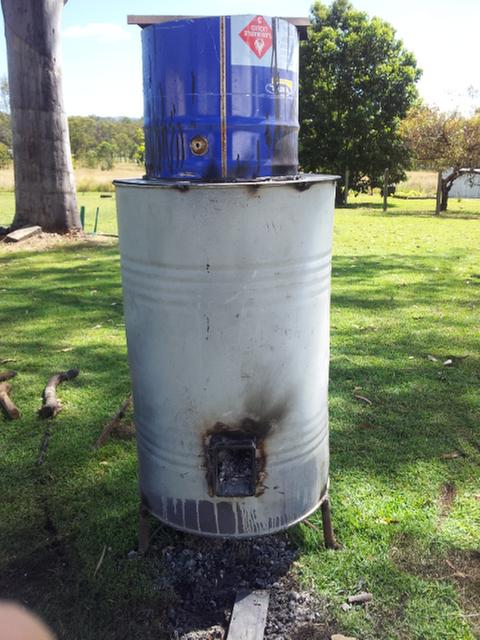 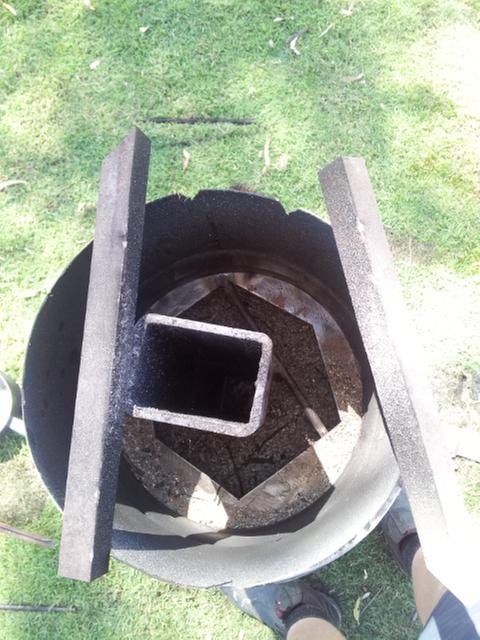 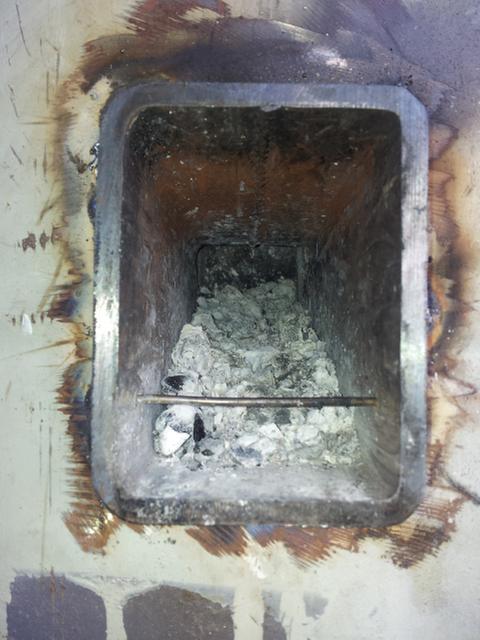 Yone' Ward
Posts: 135
Location: Springdale, WA USA - Cold Mediterranean Climate
posted 9 years ago
If you can melt aluminum cans, then you are achieving 1200F which means you have successfully reached the minimum temp needed to burn all of your wood fuel. The small size of your burn tube is apparently the problem. Experiments by others indicate that any burn tube under 6 inches has trouble burning reliably for any length of time as you have discovered. Personally I don't recommend a metal burn tube at all as even a quarter inch thick piece of steal will warp, crack, and/or burn.

arild jensen
Posts: 37
Location: New Hazelton BC zone 3 lat 56 north
posted 9 years ago
This may be a dumb question stemming from my lack of knowledge of rocket stoves. How do you design a rocket stove that does not require feeding more wood every couple of hoursO
Our present house heater needs to be restoked every three to four hours or it burns out and a new fire has to be started. Leave it for five hours and the coals are so cold you cannot even restart it by laying kindling on the ( supposedly) warm ashes. I realize the stove is undersized and we are renting so changing the stove is not an option. I'm looking at a future situation where we could build our own choice of wood burner.