posted 7 months ago
Every couple of years or so I am gifted some straw bales from one of my neighbors.  My goats and pigs appreciate them. I maintain an ample reserve.   I am realizing that with the coming summer harvest that my surplus above my reserve is likely to reach 100 bales.  I am wondering about the feasibility of a straw bale garden shed.  Is it rational? What do I need to do? What other materials will it need? What about the footing?

posted 7 months ago
Is there a limit to how big a shed can be in your area?
There is where I live, which makes me shy away from thick walled structures.
Even without such a limit, unless I was building  for living beings or food storage, I think the challenges of working with straw would outweighed the cost saving of using free.

posted 7 months ago
We have no building codes that would impact a storage shed.

posted 7 months ago
One of my biggest complaints about the 'average shed' is its wild extremes of temperature. If you've got a climate suitable for strawbale buildings, are willing to give it good boots and a broad hat, I'd go for it. If nothing else it's a good learning experience and has the potential for having expanded uses if it's well designed.

posted 7 months ago
you might consider using light clay straw 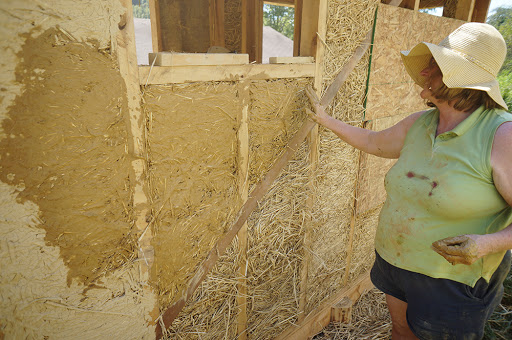 What is a suitable climate?  We are pretty wet and humid here.

I assume by boots you mean footing. What should that be?

How much of an overhang is needed on the roof?

I am rapidly getting the picture I may be better off with a stick framed storage shed.

posted 7 months ago
I've not built with straw bale, but people around here have (The Compost Education Center in Victoria, BC for one example - it's a beautiful building and has lasted well).

Climate - do you have dry periods when the outside cob layer would dry? Here, we're wet 2/3rd of the year, but have a couple months at least of summer drought. England does also, and they've got cob buildings hundreds of years old and straw bale is a variation of that.

Foundation - Our Eco-Village has built with this and I recall that they do a gravel footing followed by shale-like rock slabs for the first foot of building. My recollection is that they made a big point of putting flashing between the rock layer and the cob/bale layer so that they didn't have moisture wicking up from the ground.

Building - due to codes here, "straw bale" is really a version of "timber frame" with bale in-fill, but we're talking bigger buildings than a shed. That said, consider the types of storms you get and what they might do to your shed. A key part of storm survival is making sure things are tied together with bolts/wire/ginormous sewing in the case of some straw bale/rebar etc.

Roof - on my property, due to the "big hills in strategic spots and a few mountains that re-direct the weather", our driving rain most often comes from the east or south-east. If I were building this, I'd want a two foot over-hang in those directions. There is no law that says your building has to be symmetrical (although Hubby doesn't really believe that). The idea is to figure out how much roof overhang you need to keep most of the rain off the walls, and that's a balance between how high the rocks are from the ground up as well has how large an overhang. Overhangs don't need to be wasted space either - they can be micro-climates, seed hardening area, sitting area, outdoor food prep etc. Planting shrubs in key spots to redirect wind/rain also works.

Alternatively, you just accept that you've got spare bales and not care if they turn into compost. In that situation, I'd build a timber framework, with a foundation and roof built to absorb what nature's likely to throw at it, plop the bails in the spaces to act as "disposable walls", and use it until they need replacing. Personally, I would find the increase in the rodent population not worth it, but it's all about what you want the shed to do for you!