Treepee.. Kind of a mini cold frame around forest trees to protect my plants

Roy Long
pollinator
Posts: 120
Location: North Idaho
61
posted 1 year ago
For years now I have wanted to get some patches of plants growing here on this farm.  On my last farm I managed to get some great mint, spearmint, catnip, garlic, elephant garlic and chive patches going that simply grew on their own and reseeded each year.

On my last farm I had 200 acres and a lot of timber a distance from the house and it was fairly easy to get patches started as it was distance for the goats and my children to travel to get my patches.  Here not so much the case.  I immediately went to getting my mint, lemon balm, spearmint, catnip and garlic, chives and sage patches going and they grew in great...   Then my kids and the goats ate them to the ground... over and over again eventually killing them off.  My children are older now and at least largely better at not eating all my plants though still some issues... lol...

Now that I am starting my second time around with all these plants I wanted to get some patches going on the south side of my southern forest a ways from the house and thereby theoretically safer from my daughter and my last remaining goat.  My goat was supposed to leave with the rest of the herd but he jumped the five foot fence trying to load him.  We then caught him last spring and hauled to my buddies place 3 miles down the road where he would have two young goats as buddies and another 40 acres to roam...  He jumped his fence and came back home the same day...

Today I decided to try something out, I was thinking about getting an early start on chives, leeks, garlic and nasturtiums planted on the south side of the trees.  I figured a bit of plastic could help them to protect against frost and help them grow a bit faster not too mention "hopefully" act a bit of barrier to the goat, deer, elk, moose, etc.

This morning I thought of the "Treepee"...  lol..  After thinking about it a bit I went out and tried it... I found a tree with open southern and eastern exposure that should get a good 6 hours of direct sunlight a day and cut the lower dead branches off.  I then picked up some old dead branches from the forest floor and made a bit of a half teepee out of them against the tree and added about 4 to 6 inches of good soil inside of it. 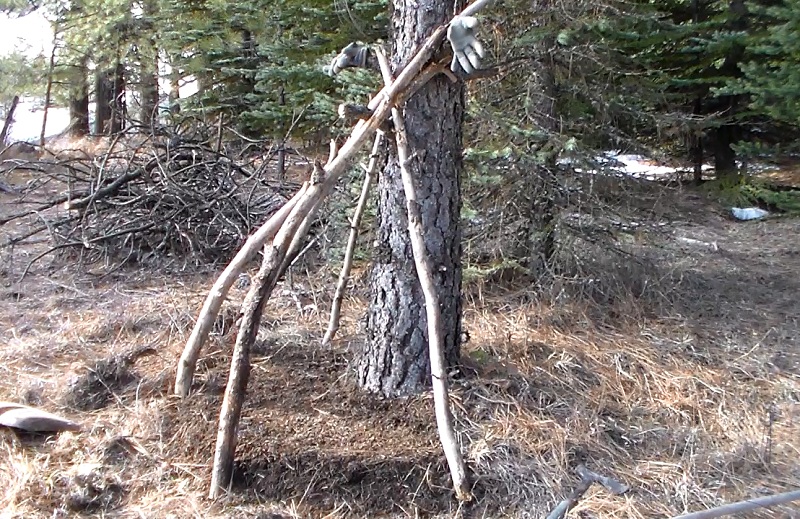 Then I put in my chive seed and wrapped it up with some plastic wrap that I have around for meat processing/packaging.  After getting it all wrapped up I put the branches I cut off around the "treepee" to further discourage the goat and whatever else that might be attracted to my chives.

No idea how this might work but worth a try anyways.  I will do some more trees in other patch plants that I want to get going.  If they do alright I might come back and reach under and pop in some zucchini, squash or pumpkin seed when it is warm enough.  I will try variations of this idea until I find what seems easiest and most effective and then see how they work with the goat and wild life in general.

Boy was it a great day for this, well other than the 20 mph wind anyways, but it was bright and warm had to be at least 45 F out there.  Still a lot of snow, but that warm wind last night melted a whole heck of a lot of it off, even my ponds have some ice free areas as of this morning.

posted 1 year ago
I have used white sheets instead of plastic for this sort of protection in winter. Compostable and it is really quite bright inside there. Tho not full spectrum it is easy to take off and on during nice days. Washable also folds up during summer or can be used for shade cloth over seedlings. If you go to replace that plastic try the white cotton sheet.
Cheers,
Roxanne

AKA Wilde Hilde
S.Oregon High Mountain Valley 8b
"Ensnar'd in flowers, I fall in the grass."-Marvell