Alison Thomas
pollinator
Posts: 933
Location: France
10
posted 8 years ago
I've been having a conversation with Walter about processing our boar and we felt that the information may well be beneficial for others so I'm posting our conversation here...

As you know, we have outdoor-reared pigs and you helped MASSIVELY with
the foaming-at-the-mouth situation we had - yes, a break in the line of
sight was all it took, two hours later he was 'normal'. We then extended
their paddock and ooops, they could see the girls again because he
started up foaming (boy has he got long vision for such small eyes!).
We've changed the paddock again but that was only yesterday. He was due
to be despatched tomorrow but now we're wondering if his male hormones
will still be too high. I seemed to remember from your site that you
separate the boars for 2 weeks before butchering them but I may have
mis-recalled this Should we wait a week or so?

We're totally convinced by your arguement about 'boar-taint' and
castration so we don't castrate here. I was curious though, if a carcass
did have taint (I recall that you said that occassionally they do), what
would *you* do with the meat?

Basically taint is a matter of genetics, management and diet.:

Genetics: Some lines of pigs really do have it but most do not. Duroc seems to be the worst but it is anecdotal.

Management: Out on pasture helps a lot. Pens results in them being in their feces and the smell getting into the meat as skatole. Exposure to females in taint prone boars is supposed to make them worse. Isolation to help.

Diet: High fiber means more carbon to soak up nitrogen compounds reducing taint. Chicory has been said to help. We feed pasture/hay+dairy as the vast majority of our pig diet. Corn/Soy has been suggested to make taint worse when it is present.

Without having tested the line of pigs it's a bit of a gamble. Can you smell taint on his breath is one thing to check.

Optimize as much as you can by: Feeding fiber, e.g., pasture/hay, isolating from females, keeping on pasture rotation.

It takes a minimum of two weeks to change the fat flavor. A month to be more secure.


Then I had more questions and Walter replied....


Here in France the locals are all saying that Max will be "inedible", "will taste awful" etc etc... They are VERY against uncastrated males, especially as he's 20 months old.


Well, there are two ways to find out. You could take a biopsy of his back fat which is the most likely area to show taint as the skatole in particular gets stored there as well as the other chemicals. Fry it up and have a bunch of people smell it since 25% of people can't detect taint.

If you wait until slaughter then when the carcass is hanging cut off a piece of back fat and do the test. If tainted, trim off fat and use lean meat mixed with cattle, sow or barrow fat to make spicy sausage - a traditional use of old boar meat.

He is actually quite young. We've done boars who were eight years old and they were delicious.

Duroc - big French breed I think. Wonder if that's where the anecdotes come from??


Actually, that is an American breed. See:

Interesting if it crossed the ocean and became big in France. I am not fond of them. They are more aggressive and reports are that they are more taint prone. However, some people raising them on pasture have avoided the taint. Could be a particular line or management and feed that helps. If yours turns out not to be tainted then you have the potential to continue testing his offspring and develop a known taint free line. That has market value for the genetics. The EU is likely to ban castration soon.

Pens - again, here in France pigs are normally kept in a shed with a concrete floor "but they're on straw" - oh lucky pigs - NOT. Maybe that's why the taint gets in as they're often standing in their own 'produce', poor things.


That would certainly make it worse.

Females - Max (and his little barrow friend) are about 500m (500yds approx) away from the girls, maybe a bit more, and round the corner with trees blocking the view. The prevailing wind at this time of year is east, so the girls are on the west side so mostly downwind.

Feeding - they are on pasture (though it's not lushly green at this time of year) but there's still some herbage. Don't think that chicory is in there though. They get hay but use it for lying in - sigh! Their diet is primarily rolled barley and eggs (we have geese, hens and ducks) with whey once a week when I make yoghurt or cheese, plus kitchen veg/fruit scraps.


For the future, try feeding late in the day. This way they may eat more pasture/hay. There is still the issue of them developing the culture of eating pasture/hay. Our sheep taught our pigs.

He doesn't smell any different from the other pigs. You'd laugh - we've been 'pig breath smelling' for most of the morning, the whole family! Isn't home-education fun!!!

Plus the meat question? Would you use the meat in the same way as a younger pig or would you process it mainly into sausages and salami?


First I would taste test it. If you know you can taste/smell taint then you can do it. Otherwise you want a bunch of people to do it since 25% of people can't detect the chemicals.

We always have need for sausage, hot dog meat, ground, etc so I would probably put him to these except for the special orders I get from chefs for meat from animals like him. There is a demand if you find the right chefs. If the meat tastes/smells good then have a bunch of shoulder steaks made and shop them around as free samples to local chefs to advertise your goods. This almost always gets us long term standing orders. It takes six months or a year for the orders to develop after the sampling. Have a good brochure, business card and price sheet. Explain you have regular pastured pork and then occasionally sows and boars. Personally, I like the older animals better, more flavor. My absolute favorite cut is shoulder steaks from the Boston Butt area of old sows. Delicious.

And if you ever had a taint carcass, what would you do with it? Does the meat smell different or is the 'prroof in the pudding' so to speak?

Amedean Messan
pollinator
Posts: 928
Location: Melbourne FL, USA - Pine and Palmetto Flatland, Sandy and Acidic
41
posted 8 years ago
I would love to talk to people with experience in raising Ossabaw hogs which if you have not heard of before you should further investigate. I have visited a farm in NC that raises them and described the qualities of the fat which mimic online references as this breed is considered the best in class in terms of beneficial fat, taste and texture. People do pay premium prices for these breeds which were once endangered, also an interesting metabolic history if you read into evolutionary theories. The animals are described as naturally docile and with my limited experience I can easily agree. I have not however found much information on boar taint which I am still pursuing. 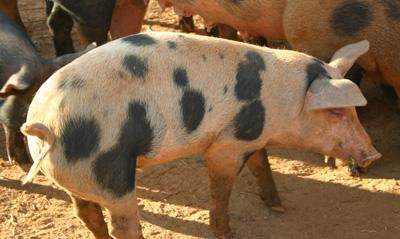 posted 8 years ago
Walter has been a huge help to me too in my porcine endeavors. I raised about 12 intact male pigs to 18 month of age, they were sexually active and not one of them had any taint. In fact they were universally declared the most delicious pork. Having said that I think I will castrate the next batch of boys. Not because taint but so I can keep all my pigs but papa pig in one heard and not worry about unplanned preganacies. Thats just what I think is easier in my current situation

I have found that I like making sausages and that my sausages are tastier than anything you can by in the store.So I have been thinking of buying an old boar at an auction. They sell localy for 12 cents a pound! And making lots of sausage out of him. This is where I think taint will be more of a concern with the boar probably been raised in confinement eating its own waste etc. So I plan on keeping him outside on pasture for a few months and away from sows, before butchering in the hopes that that will reduce the risk of taint. If he has taint then hopefully I can make spicy sausage to mask the smell .

Anyone have any thoughts on that? Would I be able to hide the odor from the meat with spice? Anyone have recipes for tainted boar sausage?

Posts: 7926
Location: Currently in Lake Stevens, WA. Home in Spokane
318
posted 8 years ago
You want sausage recipes? Here's about 160 from all over the world.
These guys are pros from Poland.

IMHO, Wedliny Domowe is the best site on the www for sausage information.
They also have tons of info on smoking, curing, etc, etc.