posted 1 year ago
Threw a couple big bakers on the wood smoker yesterday.  For those who have never tried this, you are in for a treat!
4-5 hours at 150-250.   A mix of butter ,salt ,pepper and garlic gets brushed on a few hrs before they are done. Poke lots of holes with a fork to let the smoke and butter soak in.
Last night we had a couple of bone in new york steaks to go with them and a quick stir fry of zucchini , onions and Italian seasoning ....  hmmm good!

As good as the steak and stir fry was, the baked potato's were better. I like mine with crumbled blue cheese and butter!
Baking potato's in the oven is a big letdown now... no flavor!
If you know somebody with a smoker then be sure to give smoked potato's a try... you won't be sorry!

posted 1 year ago
Yum!! I'll definitely be trying that next time my wife and I are smoking something on the grill, maybe meatloaf, which I'll share.

By pure chance, I discovered smoked meatloaf. My wife and I had planned for supper and made meatloaf which was in the fridge with all the ingredients getting to know each other. Meanwhile, that afternoon, we proceed to bake some other long term thing in the oven having forgotten about the meatloaf for supper. I proposed we grill it since the oven was in use, then I thought, man if I'm going to have the grill going, why not throw some hickory on there and smoke the meatloaf? So we took a small cookie cooling rack, wrapped foil over it, poked holes in the foil so fat could drain. We formed the raw meatloaf into some sort of oblong shape resembling a football and placed this on the foil. The meatloaf on its foiled cooling rack went on the grill with a drip pan underneath it. This was off to the side of the fire, and with a thermometer probe inserted in the meatloaf, I did my best to keep feeding hickory chunks and maintain a temp of about 225. It only took a couple hours to cook, and it turned out to be the best meatloaf we've ever made, and have never baked a meatloaf in the oven since.

posted 1 year ago
Hi James;
That's another of our favorites!  Our thermo- couple quit on the oven one day.  I had been wanting to try smoking meatloaf... Liz was not....  No choice right.. Smoked it was.
Liz now refuses to cook one in the oven... its my job at the smoker now, they are just to good!

Tip) We have always use a bread pan for meatloaf. Recently we received a "copper" looking one that has a removable drip pan.  Best meatloaf pan EVER !

Try stuffing a large chicken with stovetop and smoke that mmmmm you'll like it!

Can you tell I love my smoker?
smoking-pork-meme.jpg 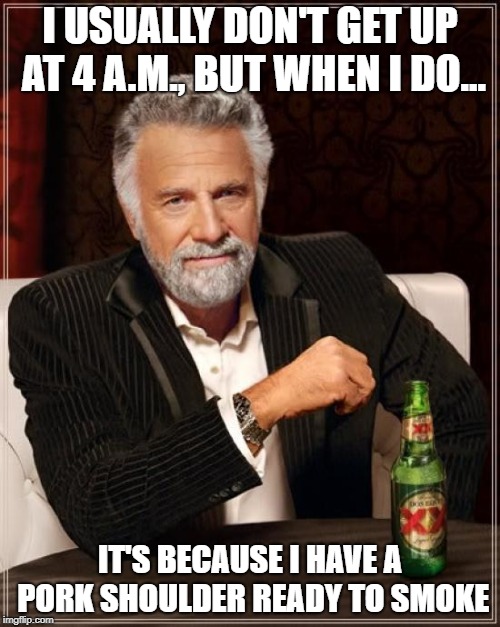 Jill Winger
author
Posts: 19
Location: Wyoming
5
posted 1 year ago
We've been contemplating rigging up a smoker of some sort, and this sounds like it would be justification all on it's own. YUM!

posted 1 year ago
I am going to tell dear hubby that now I know why he doesn't like my meatloaf!  I know he will liked it smoked!

posted 1 year ago
I'm vegetarian, for weird reasons I have a smoker. I need to try potatoes! Thank you!!

posted 1 year ago
I have been planning to try veggies, I DO like my veggies. Just hasn't happened yet. I will try it one of these days  :) I'd probably like smoked eggplant quite a lot, that sounds excellent to me.