Hello permies!
In a nutshell, us permaculturing anarchists, with land, are seeking like-minded individuals, in hopes of furthering our small but rocking intentional community, & this site seems like a good spot to post about it!

We live in the coast range, 30 miles from the ocean and 70 miles outside of Portland Oregon. Our parcel is 13 acres, SE facing, gently sloped and borders the Nehalem river.

Land for your movable dwelling, (or come build one!) is being offered for light (20 hrs mo?) work trade, or $200 rent monthly. Our eventual hope is to sell about half, 6 acres, as a buildable, SE facing riverfront parcel, to a pack or person as committed to permacuture and decolonizing as we are... - but only for what we paid ourselves, many years ago. This offer isn't here for us to "make money." It's to pass forward our excess abundance to kindred working class people like us, already alive in an authentic way, while expanding the community food-forest here, one that's already in progress.

On a river, in the woods, 35 minutes by auto to the closest store, on a lightly used dirt road... Secluded! Mostly retired and relatively young, (in our 40's) our day-to-day lives out here include decolonizing, unschooling our 3 kids, permaculture, hunting, foraging, lots of play & off grid homesteading, all while immersed in nature. There's  lots of opportunity here to advance a multitude of projects - pond making, tiny house construction, preserving foods & meats, expanding the garden,  various other permacuture-related opportunities. If all this sounds good so far, - and this kind of a life is something you want to create, right now... reply! "Someday?" - need not apply.*  Some older kids, 7 to 17, are  a plus, but not mandatory... (7-17: That's ages, not number of, btw. - ha-ha.)

What IS mandatory is YOU MUST ALREADY BE... living a rewilding life, AND be seeking a drama-free, very solitary feeling spot, for a season or more. That's it!

Anyone feral enough for us to be habitable with, short or long term, or to be far enough down this road to already know this type of offer is a good fit for them, is almost by definition, too interested in life already, to be rich now. Thus, this offer, this place, this invitation... is beyond capitalism. Our annual property taxes here? Less then $200. As the bill comes in late August , we usually forage enough Chantrelles in a weekend, by our house on adjacent BLM land, to pay it in Sptember. (From our street, uninterrupted for 20 miles north to the Columbia river, is one, giant, state managed tree farm.. lovely, huh?)

Also, no newbies please. This is a very damp place to spend a winter, perhaps too much so, for people not doing it already and thus familiar with what's involved. If you are though, - we'd love to hear from you! What can you bring to this land and community? Holding space for some/an equals.

(Indigenous & poc applicants will be considered first, btw. Direct reparations for the stolen land we now enjoy would make us very happy).

The kids here now? Cooperative, sweet, gentle, critical thinkers, self empowered & happy. Non-adversarial & given as much autonomy as they can handle. All 10 and older.

Again, we can't make it too clear... this is a poor spot to "commute" to Portland for daily work, or to try to "find" work from. Thus, nature needy people only, looking to get away from Babylon life, need apply..

Working toward genuine sustainability, while living super cheaply in the woods, vanquishing colonizer culture as best we can, ain't for everyone... --- but it sure is for us.

While radicals-in-a-non-colonized-way, kids & pets are welcome, hard drugs, drama & disrespectful people are not. We have a quiet, peaceful life out here. Peace reigns! Thus, your generator?... is definitely not in our future. But perhaps your knotweed recipe is!

If you've have ideas, dreams (or better yet - visions) of this kind of thing happening, as you've patiently been doing the internal work necessary to even desire this kind of existence, - respond! Tell us about your decolonization journey, skill set/s, intentional community experiences,  woofing/permaculture interests & motivations, favorite roadkill recipes, etc... Let it rip. Or, pass this ad to your most feral anarchist friend/pack...

Our kids are determined to make some community here, we'd like to see the food forest that's happening already expanded, and eventually manifest gaining awesome neighbors & allies on this most amazing land.

So there you have it, permies! Much thanks for your time, and much love to you all for bucking the way it is, to advance a healthier way instead, at great personal inconvenience, always. Hard work yes, but inspiring to be a part of it with you all. Ever onward!

Best wishes on your journey, from all of us loving ours, in Cascadia & on the Nehalem river...


* "Someday" is the story we tell ourselves to placate the natural angst one feels for the missing drive right now. Pass. When someday becomes now, the only time there is or ever will be... - look us up, then. On that now moment. "Someday.." lol.) 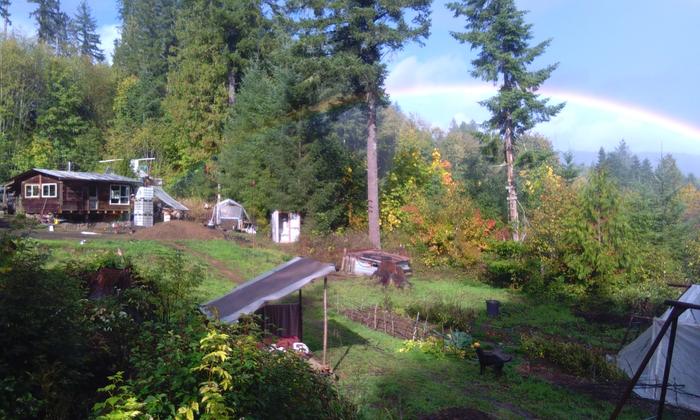 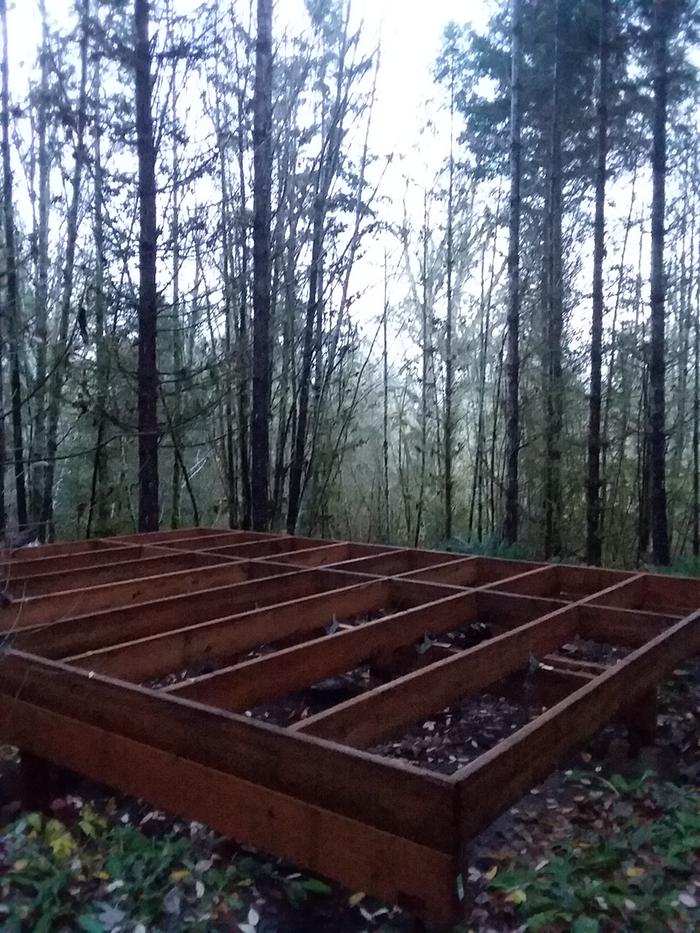 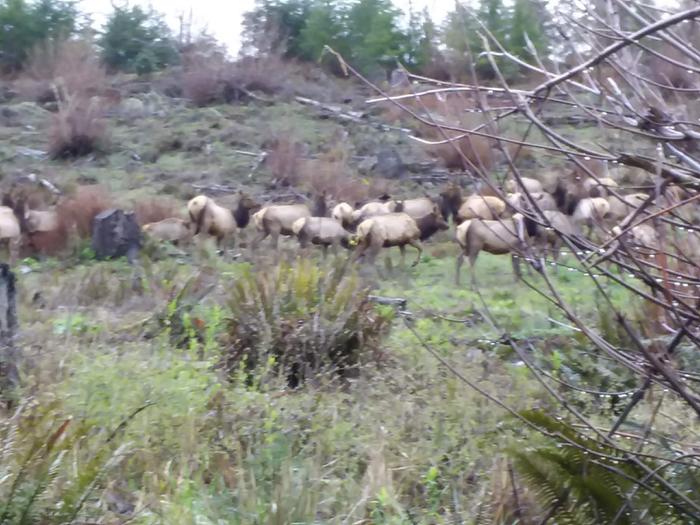 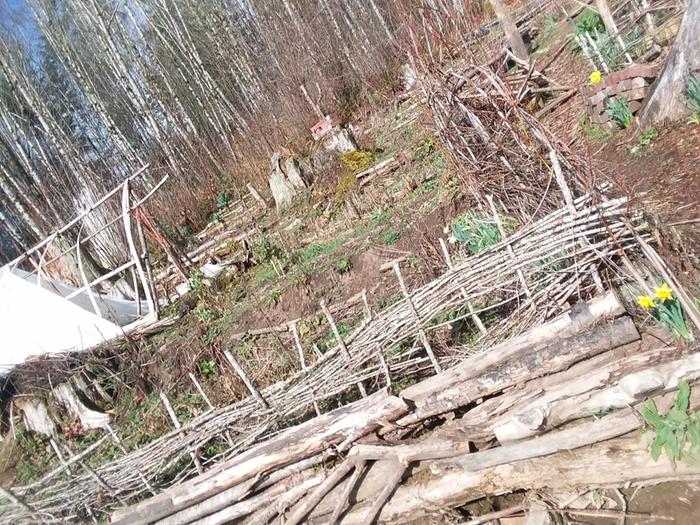 Looks like your first post here on permies.com, welcome.
You can check out what kind of work I've done towards building shelters which heat, cool, catch their water, create methane gas and have rocket stoves on my blog: twobirdstone.blogspot.com

Weather, growing season & dampness:
I know what life is like near hwy 101 and what the water/salt water does to buildings, is the land as wet as the land over the mountain by the sea?
What is your altitude there?  Since you border the river, one side is fairly low but the other side could be really high.
In the food forest, have any paw paw or honey locust trees been planted?

Onsite Materials:
Do you have sand, clay, and stone?
While I see trees in your pics, it doesn't mean you want any of them chopped down for building: do you have onsite trees for building purposes?

Solar Radiance:
I built a tiny house which the sun really didn't touch until 8 to 8:30am in the winter, what time does your building get sunlight in the morning now?
Does any of your property get sunlight at 5pm/4pm?
For me a shelter must be aligned with solar south.


Uncertain ground:
While I understand unschooling, you've used the word decolonizing which may have a very different meaning to me than it does to you. I have a fair sense of what happened to the world from about 1300 till the current date, so the idea of colonization isn't new to me, but I find even this has very  different meanings from one person to the next. Have you read "1491" and "1493"?  or "Guns Germs and Steel"?

A person in my position would need to find income to bring in things like a metal single seam roofing or, if I do  a wofati, the under soil tarps to shed rain. Making cisterns large enough to last through drought years would also cost me in machine time and/or in materials to seal them. Pipes, glass and metal tanks are also needed.  Perhaps a person could work 3 or 4 days per week in the Portland area to obtain these?

While generators are not your thing (not mine either), you might be also adverse to Tamera's stirling engine and their veggie oil thermal storage method: are you adverse to such technology?

No prior post makes me ask: How did you find out about permies.com?    ...and why extend your invitation here?

If you have the time to answer all these questions, I'd love to see your answers. Do you have any questions for me?

I haven't read these works but I'm not dead yet.


Arlo Stone wrote:
What caused you to even try to walk away from mainstream life? A sudden awakening? Cumulative proverbial straws breaking the camel's back? I'm always fascinated by everyone's... "...and then, I just had to get out" tale

Hmmmm....dunno how to answer. My parents did things like composting, soil creation, gasoline to propane conversions, we ate from our own two large gardens/animals, and subscribed to the first 100 issues of MotherEarth news.

here's a few things which seem unrelated but aren't:
-I learned what the line "...I owe my soul to the company store meant.." in '16 tons' by reading what was done to the rural land owners in West Virgina, Kentucky, Virginia, and other coal seam states;
-I read a fictional book  Sten by Chris Bunch and Allan Cole;
-was friends with a very bright mathematician who came up with statistical software for the city of gresham which could predict crime within a 30 to 45 minute window;
-was studying things like fluid dynamics and thermodynamics when I asked a roommate getting his masters in economics if I could see his textbooks;
-went through his texts books and did not find, I repeat, did not find a single equation which could define any economic behavior in the USA system (plenty of equations to describe discrete specific events in history but no underlying equations from one historical event to another and NONE which would actually predict real time economics);
-knowing that even chaotic systems have mathematical models which physicists depend upon, I knew then something was very wrong when a masters level textbooks could not explain with equations something very much in the real world and in the human realm which even criminals cannot escape;
-hell, even quantum mechanics where in an single item in multiple places at the same time has predictive equations (was I really supposed to  think economics is more complex than this???);
-then, a like an physicist is trained to do when faced with a new problem with no solution, I began to collect data and ask questions;
- once a larger picture began to emerge, I began to look for solutions.

I paid attention to self sufficiency attempts including the Biodome; I saw many failed attempts spread across the badlands of New Mexico and Arizona.  I kept track of ideas that worked and reasons why failure occured. I read Bill Mollison's Permaculture Design Manual. I saw what Michael Reynolds did with people and buildings.

...so no last straw moment, it was more like Friday's education in Hienliner's "Friday" except not so neat and tidy.

I'd like to meet you and if possible walk the land while we chat. Winter and the holidays are here so maybe sometime after the 1st of January would work for me.  As of right now, my Saturdays, Sundays, Mondays and Tuesdays are filled up....so let me know what Wednesday, Thursday, or Friday works for you in January!