Making Money from links to Amazon and E-bay

This is aimed at Paul, but anyone please feel free to answer.

In one of Pauls posts about income he mentions receiving an income from links to Amazon and E-bay, I wondered if you can tell my how is this done, and also can every or anybody do this?

posted 10 years ago
I set up the amazon account in the 90's. At the time they paid 15%. It slowly dwindled to 5% and now it has come up a pinch from that.

So here is the link i was first set up with:

0452011876: This is the ISBN for the book. Although you can put an ASIN number there too. Each item on all of amazon has a unique ASIN/ISBN number.

rs12-20: This says "paul wheaton gets a kickback if these people actually buy something by following the link".

Amazon has set me up with a few other numbers that I can use instead of rs12-20. I think my cast iron article uses ci12-20. That way i can tell how much is coming in from that page.

I set something similar up with ebay a loooooong time ago. And what it does or how it works is really confusing. But I do that for the cast iron page. People click on it to go buy cast iron. I can look at reports, but I am baffled at what it means.

Most of my articles generate zero income. The cast iron article and the diatomaceous earth article are two that do generate some money via the amazon and ebay links.

One time amazon called me into their offices to give feedback on new features they were working on. There were about eight of us there that were like me: they used the amazon affiliate program. The guy I was sitting next to had a website that was 20 times smaller than mine, but he was getting about 40 times more income than me. I was baffled.

So i can tell you about getting the links and getting a trickle of income. But to figure out how to get real money, you'll have to talk to somebody who knows a lot more than me.

also, can you link anything from amazon if you get its number and create the link yourself?

I can link to anything that amazon sells.

Peter Fishlock
Posts: 70
posted 10 years ago
Thanks for that Paul,

I think that's definitely something worth looking into if you have a knack for this sort of thing, I can remember a numbers of years ago looking into google adwords and doing little adds on the right hand side of a google search, you set it up so it would advertise a given things and everytime someone clicked on your add it chargers you, but your add diverted them to a webiste offering what they were searching for and if they bought on that site clicking from your add you got money.

there was a whole sight with companies you could affiliate for and some of them were offering big money if you got someone to fill out a questionnaire from there sight.
you can experience this now if you try to watch a film on the internet you will get a whole bunch of sites that say you can watch any film after you fill out a questionnaire which is lengthy and gives everyone you details, to bombard you with junk , the people get a pay day and it crashes right after your questionnaire is finished so you dont even get a film.

When I gave it a go I just used google adwords, so there was no scam, but i was that terrible that i got charge more in clicks than i made from questionnaires, infact I never got any done and made no money LOL.

posted 10 years ago
I remember being once in a while thinking that I needed to leverage coderanch to get an income and trying all sorts of things. Some of those affiliate programs are a complete rip off. They say "you will earn $13 per thousand!" and then when you delve down into it, "thousand" means "hundred thousand" and when I tried it, I earned $0.00000000000 per thousand.

Anymore, screwing with any of it just feels really dirty. Amazon pays little, but they are currently very transparent and honest about how little.

Adsense (the banner ads from google) ... varies. You end up having to fiddle and tinker far too much. If you have enough traffic, and your host costs are really cheap, it might cover the host costs.

Getting ads from small businesses can be weird. Usually they want to try things out for $50. But they want about five hours of your time along the way to talk about the possibilities. And half of that conversation is about their concerns over whether they can trust you, and then can they get a discount for some reason down to $40. And, why can't I create the banner for them.

I suppose there are sales people out there that can talk to the sheisters and sheister them right back and come out way ahead. Or talk to $50 people and get $5000. Or get the affiliate stuff to pay thousands instead of zero. And it seems that others are able to get hundreds of times more income from adsense and amazon stuff than me. After years of trying to figure it out, I've given up. I have some simple things set up that bring in a trickle, and I let it go at that.

posted 6 years ago
This is my worry with all of the online residual income streams, that I will put in a lot of effort and time and will get cheated , or at best make .03 ¢ per month.

“Enough is as good as a feast"
-Mary Poppins

Matu Collins wrote:This is my worry with all of the online residual income streams, that I will put in a lot of effort and time and will get cheated , or at best make .03 ¢ per month.

Then don't do it.

At the same time, there are a few things I did that I thought would bring in $1.00 or more per month that are bringing in about $1000 per month.

And for everything I did that I thought might bring in $1.00 or more per month, there are probably 100 things I did where I was sure it would never bring in a penny. And, mysteriously, some of those things led to income. 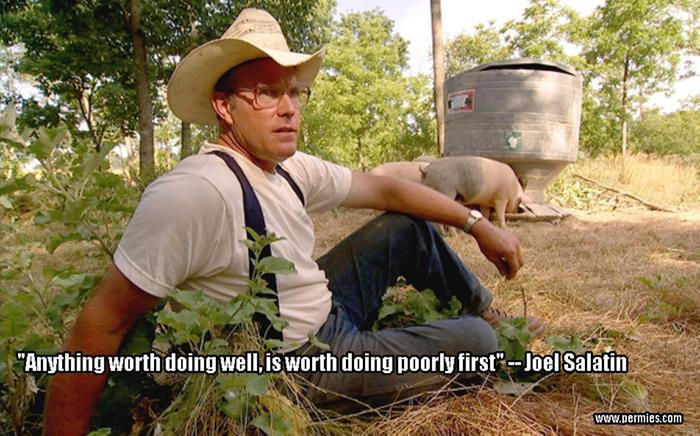 I couldn't find a meme of me saying this, so I'll just put it in big red letters:


However, I did find this one. Apparently made by permaculture voices: 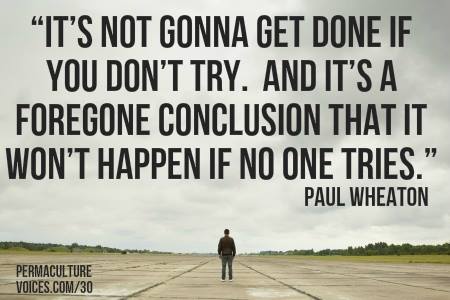 paul wheaton wrote:I couldn't find a meme of me saying this, so I'll just put it in big red letters:

Matu Collins wrote:...that I will put in a lot of effort and time and will get cheated...

Cheating is actually a big problem in this area, and I say that as somebody for whom affiliate marketing has been a significant fraction of total income for more than a decade. It often takes the place of "changes" to programs that break old links and disrupts the revenue flow from old work. And yes, many affiliate programs (even supposedly quite reputable ones) do this deliberately. Many more just don't care; as far as they are concerned (and I think this is stupidly short-sighted) if an affiliate isn't currently active with new promotional efforts, they don't think the affiliate is valuable.

That said, this kind of "cheating" is really just a form of not paying your business debts. And if there's any area of small business where getting paid by your business counterparties isn't sometimes a problem, I've never encountered it. So my philosophy is to do the work, monitor the results, and over time, shift future work toward the programs that are easy to do business with and reliable about payment. A lot of times this means learning to ignore shiny stats that suggest your sales are off the hook. Sales in somebody else's interface are just a number until they cut you a check, and if they aren't reliable about that, you're better off sending your traffic to somebody who does pay you, even if it's not (theoretically) as much.

Erim Foster
Posts: 9
Location: East SF Bay, CA
posted 6 years ago
I think in terms of the Amazon affiliate network specifically, the cons are the low commission and short cookie life. That's the time the cookie your referral URL sets lasts on the person's computer. Last I checked it's 24 hours for Amazon, which is super short, relatively speaking.

The up side is that Amazon converts much better than some random eCommerce site, for the most part. And, you may link to a book other item that'll make you $1, but the person could easily buy $100 from Amazon in the same purchase and you'd make $5. Lots of people shop regularly at Amazon, and it's a huge, trusted brand.

Like Adsense, Amazon is a good way to get started monetizing a website. But if you find you have targeted traffic and people are buying stuff, you'll probably be better off exploring more profitable affiliate programs, trying to set up your own relationships with vendors, or (ideally) creating your own products. But I realize that's not for everybody.