Dealing with a swamp: Roman road design or something else?

John Weiland
pollinator
Posts: 1428
Location: RRV of da Nort
186
posted 3 months ago
Short story long--
We've been at our residence for a little over 25 years.  The Red River Valley outside of Fargo is heavy with clay, flat as a pancake, and drainage is a challenge.  We seem embedded in recent years within a wet cycle which can make just regular operations a trial and, with age, it's becoming quite taxing on daily life....until the freeze-up of winter provides some temporary relief.  The unique aspect to the story is the 'inversion' of space normally allowed to human versus livestock access.  Hooved livestock are rescue animals of my wife and they have pretty free reign of the fenced property---a second fence keeps the immediate yard near the house generally off limits to their traffic.

In years passed, the saturation of the soil was tolerable.  Sections of the land near the livestock sleeping quarters could become pretty churned up, but nothing of consequence for the most part because they weren't penned.   With the wetter cycle upon us, however, it's not surprising that a perimeter of ~20 feet around their sleeping quarters now resembles a feedlot.  And it seems to be expanding as the high saturation of the soil, even without the churning from livestock hooves, is killing off the grass and other foliage.

We've already begun tackling the issue with deep trenches to help draw water away from the buildings (buildings that have no gutters), but anyone who knows deep clay will understand that water can take for-EVER to move from high ground to low ground through clay-rich soil.  So I'm starting to consider more involved 'Roman Road' type approach (see photos below), but wanted to post here first to see if anyone else had to solve a similar problem, with our without the factor of livestock.  One problem that livestock present is the weight of the animals, their propensity for destroying construction projects, and the need to have a "good enough" surface for their feet:  sharp gravel or stones would not be an option, and yet smooth concrete would become an icing danger in winter.  Springtime will be the worst period as the frozen ground will not permit water movement, yet the thaw will produce ample pooling of water.

Any views on this situation for a drainable surface that would either hold up to animal traffic or require minimum maintenance while reducing the mud problem in those areas?  I understand that this won't solve any problems immediately beyond the walkway as designed, but perhaps the water could either be shunted better away from the site of traffic or contained better in the porous space under the walkway as it slowly percolates away.  Thanks for you input!
BattlesWithClay.JPG 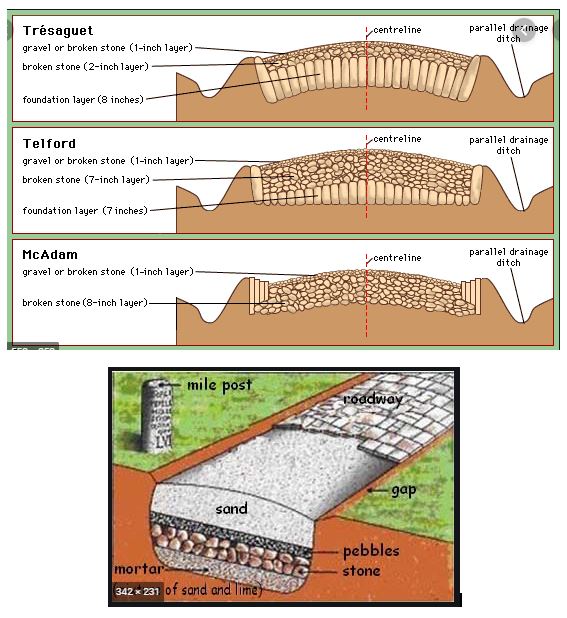 D Nikolls
pollinator
Posts: 1296
Location: Victoria BC
156
posted 3 months ago
Can you put up gutters, and an extended downspout to take all that water outside the problem area, ideally right to a pond or ditch??

I might think about expanding the covered area over some of this heavy use area...

I hear geotextile is a heck of a material, hopefully someone who has direct experience can comment on suitability here...
Travis Johnson
pollinator
Posts: 4958
1126
I like...

posted 3 months ago
Almost all my Heavy Haul Roads are based upon the last design, the McAdam as represented in the Roman Series on road building. I do it this way because it was how my Grandfather showed me how to do it, it makes the best use of the material I have, and it works. The real secret is the abutting rock in the inslope of the road where the road bas meets the ditchline.

It is one of the last steps in building the road. I take big rock, and then carefully place the rock with an excavator, then pound it into the gravel. When a heavy truck rolls over the road, it presses down on the gravel bed, but wants to blow the inslope out from the weight. The pounded in rock keeps that from happening, so I do not get a slumped road.

But for animals, you just need a good gravel pad to get the water to drain through the soil. Concrete would be even better, and the USDA-NRCS has conservation Grants for this. They call them "Heavy Use Areas". I am not sure what the pay=out for that is, but I think mine was like $9000 for a 24x48 concrete pad, 6 inches thick.

posted 3 months ago
I was just thinking: if you are on a budget, and do not want to get a grant to make a concrete pad, you could do it yourself.

You would want to haul in some sort of fill so that the area where the livestock are, is a bit raised for drainage purposes. I would use gravel, but you could just use earth. In any case figure how many bags of cememnt you need, then spread it out over the dirt as evenly as possible. Then take a rototiller (your own, borrowed or even rented) and mix up the dirt and cement. You can leave it, and eventually enough moisture will make it harden, or you can apply water and then till up the cement again with the rototiller.

This is a fast, easy way to make hardscaping called "Earthcrete".
John Weiland
pollinator
Posts: 1428
Location: RRV of da Nort
186
posted 3 months ago
Travis and Dillon,  thank you for your responses so far.  Much of what you have mentioned, Travis, I've come across in one form or another looking at cob, air-crete, foam-crete, and other variations on concrete and I'm liking the ideas that you've added here.  I had seen other commentary mentioning the 'tilling' of concrete mix into earth and was a bit confused .....  wouldn't it eventually just break up into millions of tiny grains of earthcrete and be swallowed up by the clay?

But I am liking the idea of excavating about 1 - 1.5 ft of the clay that is closest to the building to create a channel ~ 10 ft wide, then dumping concrete/quikrete into the channel to form a layer and then following with the tilling idea that you mentioned.  By then back-filling with crushed rock/coarse gravel, the final topping could be 'class 5' road gravel.....the latter being the abundant and preferred surfacing for the rural gravel roads in the area.  Even in these cases, I suspect I will need an outlet:  Water percolating into the rock/gravel mass will need to go somewhere and there will need to be some sort of French drain or drain-tile effect to allow water to flow to a nearby excavated ditch.  What we are fighting in all of this are the clay fines and sediment that clog, in a short time, any filtering-type contraptions.   That said, we do have a large roll of 'cow carpet' on hand,---a geotextile that we could employ to try to separate the clay from the rock.  As Dillon noted, this might be the time to "roll out the carpet" and put it to work.  Gutters have been employed in the past, but they've been rather cheaply installed to save on cost and we've paid the price for that....the ice and snow sliding off the metal roofs rips them apart pretty easily.  So we are revisiting that possibility with something more heavy-duty.

Thanks again and I hope more weigh in with their own experiences.  Even as it's great for growing crops, the depth of clay and lack of slope are key impediments to success on these efforts, but your comments give me a good place to start.  Needless to say, since the entire Red River Valley is essentially the lake bed of the ancient glacial Lake Agassiz, it has a long history of holding water.  By way of education, below are some of the considerations that the city of Fargo needs to contend with regarding this matter, probably not too different from building on the sands of the Atlantic coastline! >>>

"Forming the remainder of the materials are sediments deposited into Lake Agassiz. Approximately 85 ft (26 m) of the gray, slickensided, fat clays of the Brenna/Argusville Formations are overlain by 20 ft. (6 m) of the tan-buff, laminated silty-clays of the Sherack Formation. We seldom can view the contact between the two formations, although it is occasionally visible along the channel of the Red River during times of low water flow. Within both formations are occasional cobbles and boulders that appear to represent dropstones: rock debris that fell off icebergs floating in Lake Agassiz. 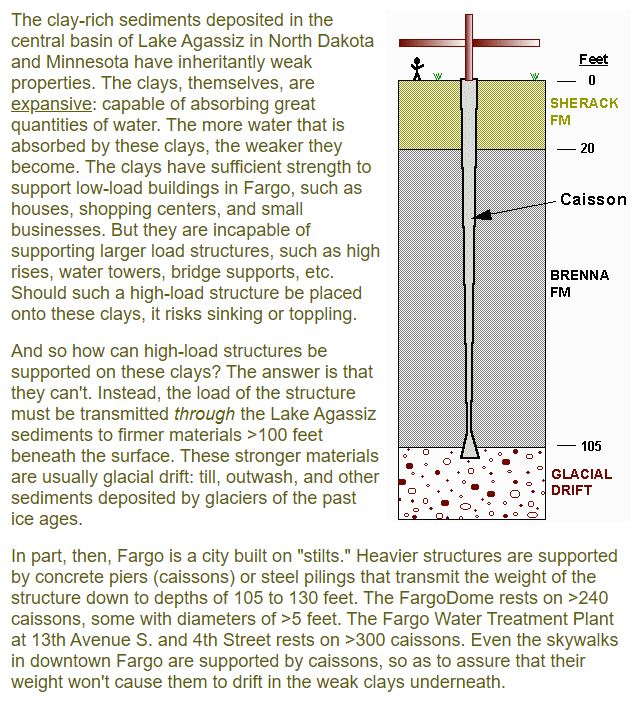