william enckhausen
Posts: 5
Location: Jaltenango, Chiapas, Mexico
posted 1 year ago
Hello,  thank you for all of the information on your website.  I have built adobe houses with concrete column integrations in the past.  Because I now live in an area prone to earthquakes and I would like to build with cob I am considering how to integrate cement columns into a cob structure and then using a bond ring above the cob.  This way even the cob wall could collapse and the roof would remain.  I understand that one should not interrupt the continuity of a cob wall, however I have considered the idea of putting the columns in the corners of the structure and use rounded cob walls to fill in these corners so that there is a continuous, uninterrupted cob wall and the columns would be hidden within the thick corners.  Let us say it is a square structure for the bond ring but the corners of the cob wall would be rounded so that the column would remain in the corner.  (The curves covering this corner connecting the adjoining walls would be as thick as the rest of the walls).  My main question is would it be better to tie the cob walls into the cement columns with rebar protruding from the column or simply to let them be touching without integrating.  Thanks in advance,
William
Jack Edmondson
pollinator
Posts: 428
Location: Central Texas zone 8a, 800 chill hours 28 blessed inches of rain
76
posted 1 year ago
You will need to tie the cob into the column.  Much of cobs 'strength' lies in it continuity.  Disrupt that continuity and you lose its self reinforcement.  Just as cob does not like right angles or rectilinear design, by interrupting or weakening the connection with itself, you will lose its stability.  Since it won't be load bearing it would not be a structural issue, but I think you would have nothing more than cob panels supported by thin links to another cob panel.  I would also think the top of the cob wall to the bond beam (ring) would need to be supported as well for lateral (in and out) stability.

As with any element, doors, windows, etc..., things in a cob wall need to be tied mechanically.  Since it is not load bearing, have you considered strawbale infill and a cob plaster?
william enckhausen
Posts: 5
Location: Jaltenango, Chiapas, Mexico
posted 1 year ago
Thank you for the reply.  Yes, I understand that the continuity of the wall is important but the plan of hiding the column in the corner would allow that.  Another question is if the rebar that integrates into the cob wall will crack the cob wall as it dries and settles?  I like the idea of a strawbale infill with a cob plaster.  Do you mean a strawbale wall?  I am totally new to such ideas about strawbale walls.  Do you have a link to send me or a .pdf which briefly describes these ideas?
Thank you.  I see you are from Central Texas.  I am from Austin.
William
Jack Edmondson
pollinator
Posts: 428
Location: Central Texas zone 8a, 800 chill hours 28 blessed inches of rain
76
posted 1 year ago
Of course there is an entire forum here on Permies regarding strawbale:  strawbale forum

Straw bale is natural fiber that is slow to decompose, compressed to a very high density to form block used to infill a structural frame.  Bales themselves can be made to be load bearing if compressed tight enough; but most builders just use it as a super insulation inside a timber frame (or concrete in your case.)  The bales can be coated with cob, plaster, or any other material that will adhere to the bale to form attractive, well insulated natural material wall.  The advantage in your case would be less clay needed to prepare to make a solid cob wall, a higher R value, and quicker build time.

I don't think you would have any issue with cracking of cob with rebar installed.  As you know cob walls are thick.  An additional 1/2 of rebar won't impact the material.

A few links for strawbale:

Are you planning to build in the Austin area or Texas in general?  I think Austin is more alt. building friendly than most places for permits and inspection, but definitely check with code enforcement before you get too far into your project.
william enckhausen
Posts: 5
Location: Jaltenango, Chiapas, Mexico
posted 1 year ago
I understand that the rebar is thin and would not effect the wall if it were just a piece of rebar in the middle, but it would be anchored in a fixed concrete column.  I understand that cob walls shrink in height as they dry, and that was my concern:  that the rebar remains in a fixed position but the cob shrinks against something that does not shrink and go down in level with it.
Jack Edmondson
pollinator
Posts: 428
Location: Central Texas zone 8a, 800 chill hours 28 blessed inches of rain
76
posted 1 year ago
Shrinkage does not seem to be a factor with deadman anchors for doors and windows.  In fact they are required to give enough surface area for the cob to hold the weigh of a door.  If deadman blocks of this volume can be used, rebar will not be a problem.

They are building up the wall in sections, which helps the wall stabilize as they go up, so that may be something that would help you with shrinkage issues.  I can see using rebar anchors on in your concrete columns used in the same fashion, helping tie it all together.  I am understanding your concept correctly?

william enckhausen
Posts: 5
Location: Jaltenango, Chiapas, Mexico
posted 1 year ago
Yes, I think you understand my idea clearly and the deadman technique is quite similar.  thanks a lot.  The only doubt I have now is rather to leave the whole cob idea and use strawbale since the walls are not load bearing anyhow.  I have experience with adobe and have been curious about cob, but really the strawbale walls seem to have many advantages.  I am now in Chiapas and it is a little hot all year round.  The adobe houses here are pretty cool but I am certain that a strawbale home would be very comfortable.
william enckhausen
Posts: 5
Location: Jaltenango, Chiapas, Mexico
posted 1 year ago
Well, as I read about strawbale it seems most people dont recommend it for tropical, humid climates, and so now cob seems like the best option.
Johnny Cobins
Posts: 30
Location: Kingsbury, TX
19
I like...

posted 1 year ago
Use cob with no concrete. Concrete cannot be repaired if it does crack, and cob can. If you don't want your roof collapsing then make them separate buildings. I started my build by erecting a 50x50 ft pole barn, and used a slip design to separate my two story cob house from the scissor trusses of pole barn so that either the roof could deteriorate and be replaced or a cob wall could collapse without bringing down the roof. I live on 350ft of sand and clay with no bedrock. I have 30+ videos on my cob YouTube channel named John White. Search for cob barndomium. Or look up my two story cob barndominium on this forum. Good luck. I attached a couple of pics to illustrate.
20190629_204545_HDR.jpg 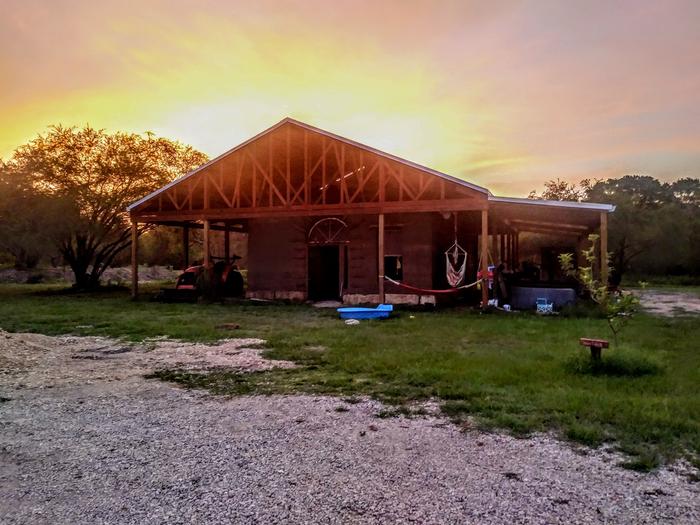 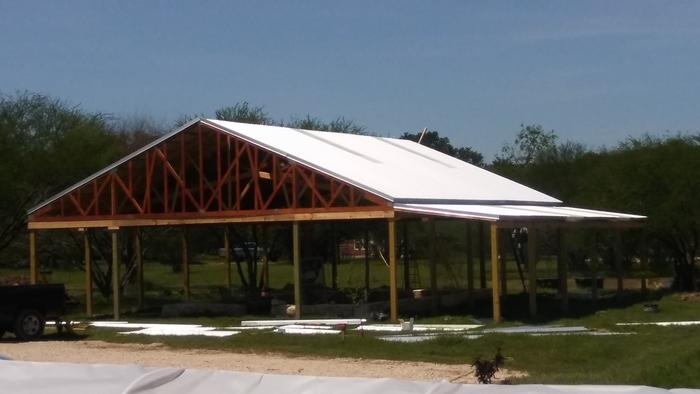 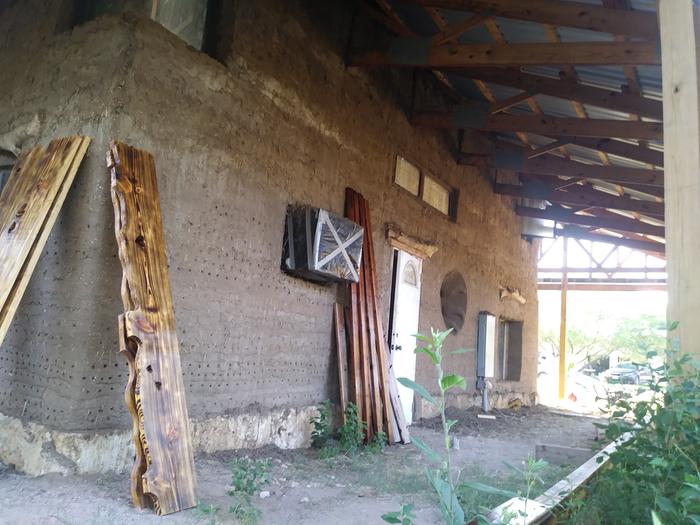