This is part of my growing list of candidates, to be used in reforestation, in the Philippines.

This one is a native .

I'm going to want some rainbow eucalyptus. The fastest growing eucalyptus variety and the only one native to tropical rainforest. It's one of only four, out of seven hundred and something, that are not native to Australia.

It looks quite exotic and they sell it as such, in seed catalogues. But it's the most commonly used pulpwood, for papermaking in the Philippines.

The multicolored bark has to do with the time of peeling. It starts out green, then blue, then yellow and then it gets light purple and ends up sort of purpley brown. After the tree has been cut for a while it all looks just purpley brown.

I will grow some in prominent areas for the look, but my main interest in it is that you have good buildable poles in as little as four years, and pretty heavy timbers in 10. Big trees are harvested for pulp within 10 to 15 years of planting.

I want to grow something that isn't edible, along the roadway to define the property boundary. Most visitors aren't going to miss this one, if you send the description of how to get there along with a photo of the property from the street.

Eucalyptus often don't play well with others, so I expect to do a few small monoculture blocks. They will be planted as tightly as recommended, and then thinned as they grow. This is to prevent a whole lot of side branching.

We will probably grow a few in more open areas, in order to get nice specimen trees, but most will be grown with an eye to future use as poles and saw logs.

I don't want to produce pulp, so we will branch prune and grow them tight enough to keep the trunks reasonably straight. I would expect to do the first thinning harvest at 4 years which will produce some nice poles, suitable as rafters on smaller buildings. It will be necessary to thin again, when we have 8 inch material. After that, I'll just keep an eye out and thin anything that looks like it's about to die from lack of light.

It gets pretty dark on the floor of pulp plantations and Eucalyptus is a bad neighbour generally, so I don't expect much in the way of weeds or ground cover.

Fertilization may be carried out sometimes, but I think most of it will be just from leaf drop from neighbouring legumes. Most trees will be planted in narrow blocks on contour. A hedgerow of legume trees, up hill from the eucalyptus, will provide a good dose of nitrogen.

These trees are water hogs and are sometimes planted in order to dry out mucky areas. When properly fertilized, these are the fastest growing tree in this  country of fast growing trees.
Screenshot_2019-09-29-11-27-10-1.png 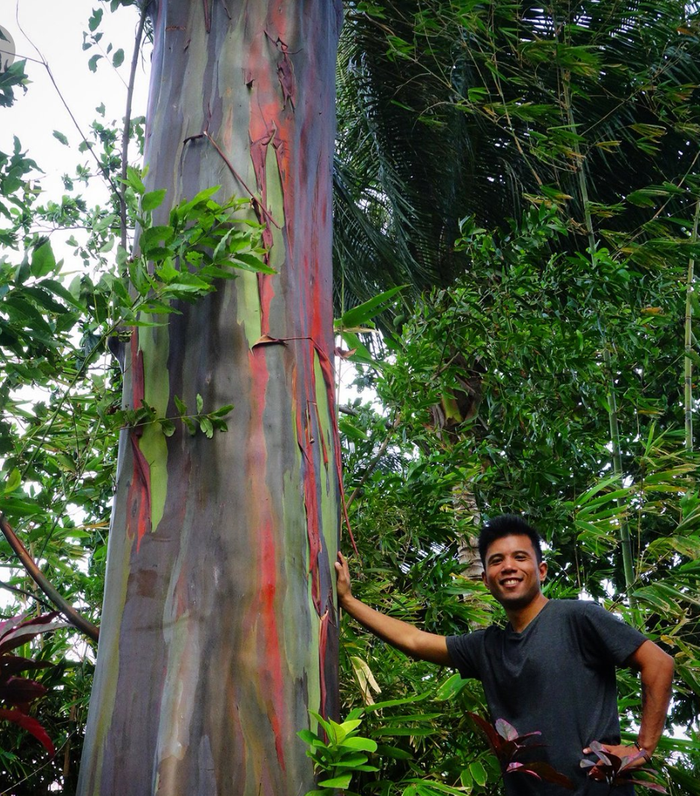 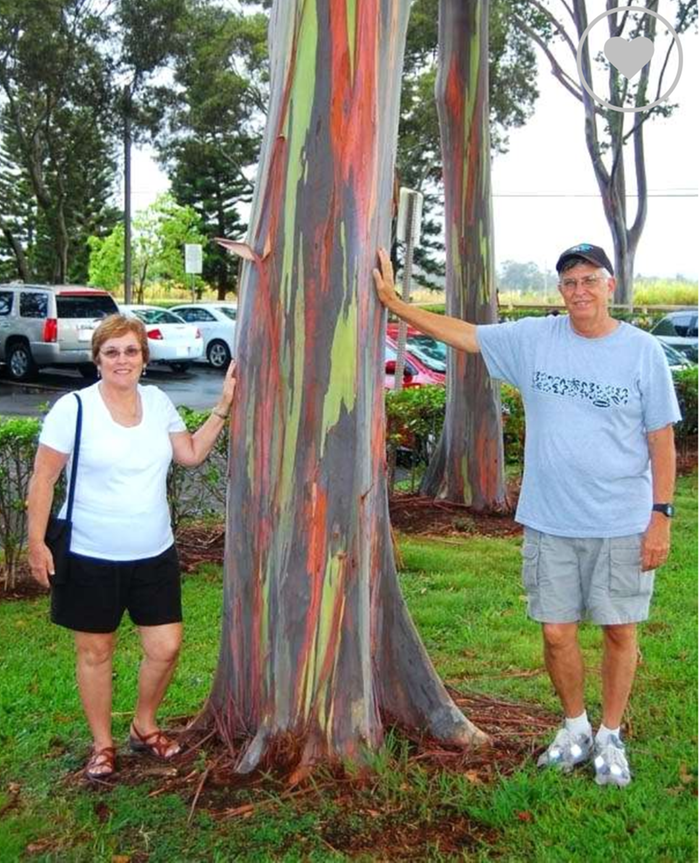 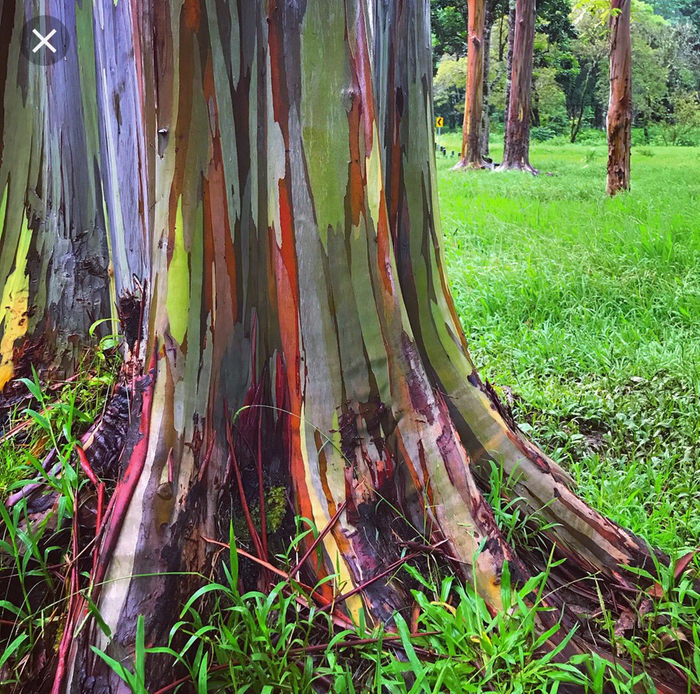 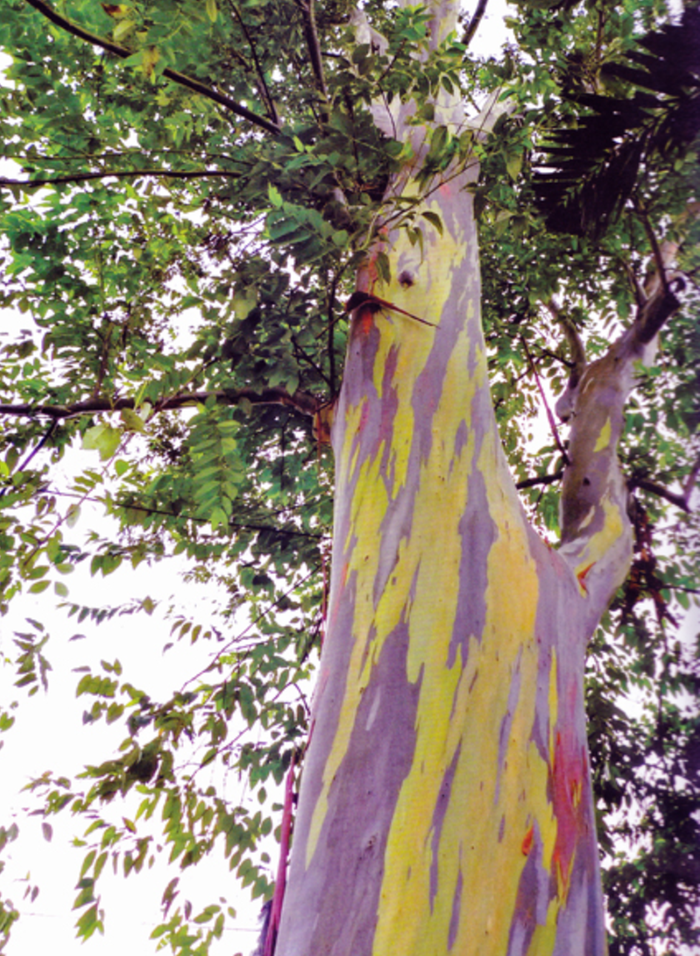 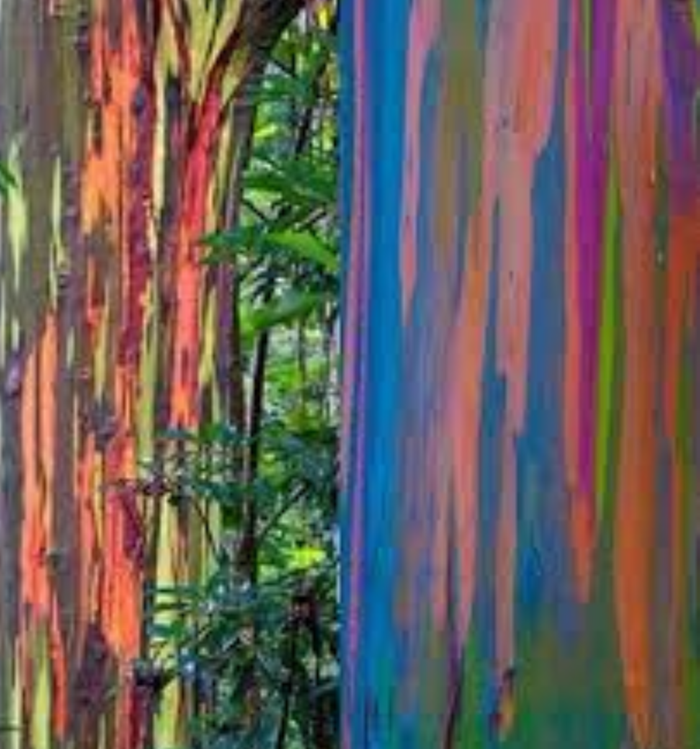 D Nikolls
pollinator
Posts: 1565
Location: Victoria BC
220
posted 1 year ago
Wow. The look reminds me of an arbutus... but with extra colors, a turbocharger, and presumably much more durable timber...

Does the bark just continuously peal, or is it seasonal?

posted 1 year ago
how gorgeous. I work with lots of eucalyptus species and it would be awesome to have some of these in my backyard.

E deglupta has very frondy (?) flowers and makes good bee forage. I understand it is used as a companion to provide shade for coffee (you'd obvs want to space it to be a bit spread out. I would imagine it would be a good component for integrated forest-coffee/other crop-animals as well.

Dillon Nichols wrote:Wow. The look reminds me of an arbutus... but with extra colors, a turbocharger, and presumably much more durable timber...

Does the bark just continuously peal, or is it seasonal?

The bark peels continuously, probably because these trees never really run out of water and they grow continuously. I don't know that there's much difference in speed of growth between these and other fast-growing eucalyptus, when they are growing in the same conditions. Being adapted to tropical rainforest, they have the potential to continuously grow, provided that they don't run out of certain nutrients. Many tropical soils are deficient in a number of things. I will make sure that mine aren't. In Brazil eucalyptus are grown on a 5 year rotation with maximum yields up to 100 cubic metres per hectare per year. No other tree has matched this.

Eucalyptus are a worldwide savior or scourge, depending on the situation and who you ask. They have reclaimed much degraded land but also pushed out native species while creating soil conditions suitable only to Eucalyptus. The rainbow eucalyptus is a major invasive in Hawaii. But it's native to the Philippines and other trees have competed with it for millennia.

The paper produces already grow a fast tree. I want mine to grow faster and to be straighter. Many of the other fast growing trees aren't as durable when it comes to insect attack. Legume trees will make up more than half of my growing area in the beginning and they also put on wood quickly. But this fast-growing wood is limited in application due to vulnerability to rot and insects. Because of this, much of the legume wood will be used as firewood and charcoal.
Dale Hodgins
Posts: 9002
Location: Victoria British Columbia-Canada
670
posted 1 year ago
I have made an unfortunate discovery. It is one of the lightest and least durable amongst eucalyptus. It doesn't contain much of the preservative oils found in other types of eucalyptus.

This may help it to be of use in pulp and paper, since it doesn't have to have those oils and pigments extracted.

As one of the softest members of the family, it's probably not going to be suitable for flooring. It apparently still makes good firewood and charcoal, although ligter varieties of each.

It might be useful for pallet wood and other packaging, but I don't want to play in that market.
......
I was led astray by blog posts and websites that basically copied the traits of other related trees and put them with a picture of this one. Then I found one specific to the paper industry and rainbow eucalyptus, where they praised its rapid growth,  lack of oils and the softness of the wood. Good for them, not so good for me.

We will still grow some, because they are a very attractive tree that can grow to 180 feet with a 7 ft diameter. But they are not going to compete with teak as a durable building wood.