posted 1 year ago
As a part of a long process of converting my family to an ancestral diet (of my own invention, basically basing my family's diet on only those raw ingredients that our family's specific north European ancestors had access to 500-1000 years ago) I am working on breads.

While I'm getting the hang of baking nice naturally leavened breads from just homeground spelt and rye, sometimes I want a specialty bread and I need to sift the bran out of the flour. Sifting out some of the bran from my flour helps the rise, but MAN it is a lot of work.

I've googled to see if anyone has slapped together a DIY solution for this but not finding anything. I have a 10" sifting tray that I use with a fine mesh screen bottom, but it just took me 45 minutes to hand sift 2 loaves worth of flour. And it is MESSY! Flour everywhere. That's way too much work for me to do every week.

Is there a way, I could perhaps use a drill or something, to automatically "shake" the sifter? I have in my head that I saw some kind of DIY rig using a drill for a similar purpose recently but I can't remember what it was for or what it might be called. I was thinking anything that I could attach the sieve to that would shake it up and down or back and forth would work, as long as I could rig up a cover for it.

C. Letellier
pollinator
Posts: 430
Location: Greybull WY north central WY zone 4 bordering on 3
96
posted 1 year ago
What sort of motion does it take to keep stuff flowing thru the sieve?

C. Letellier wrote:What sort of motion does it take to keep stuff flowing thru the sieve?

Attaching an image of what it looks like, for reference.

When I'm sifting myself, I put a couple cups of fresh milled flour in, and then shake it side to side inside a brown paper grocery bag. The sifted flour collects at the bottom. Once I've sifted it a bit, I will sometimes switch to "bouncing" the flour inside the sifter, sort of in a "flipping a pancake" motion. I think an even horizontal shake would work, or even a half flip/shake thingy would be fine too. Just as long as the contents are kept moving around.
Screen-Shot-2019-09-28-at-5.34.38-PM.png 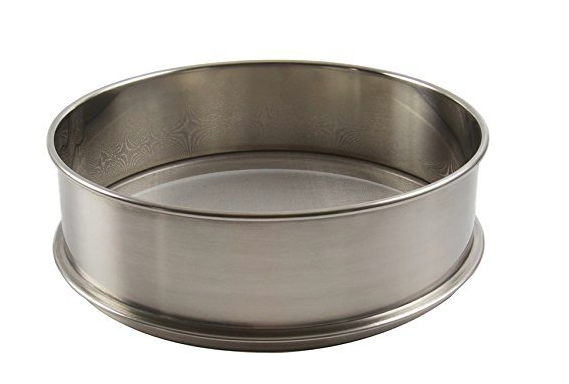 posted 1 year ago
I admit my thoughts on this are not fully formulated on this yet, as I probably need a lot more coffee, but I think what you need is a Drywasher.

It I actually designed for screening for gold.

The art of recovering gold is pretty much in screening soil to a very fine mesh. You could apply that same action by possibly getting what is called a drywasher. It is a small device that screens out soil and rocks to get down to the very small particles of gold. You might have to mess with the screen size, but how it works is pretty much what you are looking for. It is small in size, affordable, and works by shaking out the heavier, and larger soil. This is designed to work in the desert where there is no water, which is how gold is traditionally recovered.

Or you could convert a cement mixer to do the sifting if you wanted something that was Do it Yourself.

You would basically have to make a fine mesh cyclinder the size you needed, and bolt it to the inner barrel of a NEW Harbor Freight cement mixer since this would be involving food.

When you put the mixed flour in the inner drum, and the cement mixer rotates, only the pure flour comes out the screen and into the cement mixer barrel. You can buy them for less than $200, and then configure the fine mesh cylinder pretty cheaply. 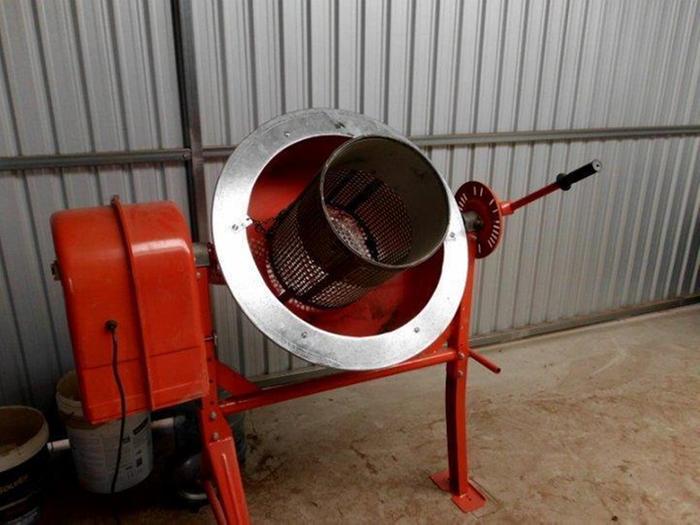 Dale Hodgins
Posts: 9002
Location: Victoria British Columbia-Canada
671
posted 1 year ago
Something based on a vibrating sander, gives the correct motion.  $5 at a million yard sales.

Or, attach a small electric drill to the side of the sifter. It should contain a bit maybe 6 inches long. Tape a nut,  bolt or coin to the drill bit. Now it's out of balance and will shake when you squeeze the trigger. I sifted soil this way and made a thread,  I think.

You can rig up the drill in about a minute, then holding both the drill and sifter of flour, test it. Use a variable speed drill and start slowly. Start with something quite light taped to the  bit. Go heavier for more shake. This absolutely will work.

FOUND IT  !!!  I  Googled my name with "electric drill screener, permies Dale Hodgins  " and a 2012 thread came up. It references and 2011 thread. ..... Sometimes I have an idea,  Google it and there I am, pontificating on that very thing, years earlier.
........
This is something I gleaned from one of my posts in green building ------------------ POWER SCREENER------------I've invented a dead simple power screener. I'm sure this has been invented before but it worked so well I'm going to tell you about it anyway.----------- I needed to screen rocks out of some reasonably dry dirt. I had a big screen about 4 ft. in all dimensions. I found that it worked reasonably well when used on a slope with only gravity powering it but I wanted to make it process material quickly and to break up lumps.

I mounted an electric drill to the top of the screen. I used duct tape to attach a bolt to the side of a drill bit so that it was seriously out of balance. With the trigger locked in the "on" position, the drill vibrated wildly and transferred that energy to the screen.

No doubt this is hard on electrical equipment. But there are plenty of old drills and skill saws which have no value. Any of these items may be altered so that they shake a great deal. They could be used for processing earthen plasters, for soil sifting, etc.
Travis Johnson
pollinator
Posts: 4958
1154
I like...

posted 1 year ago
A person could use a reciprocating saw too, only instead of the saw blade, put a bar of steel to act as the pitman.
Dale Hodgins
Posts: 9002
Location: Victoria British Columbia-Canada
671
posted 1 year ago
I am living proof that a recip saw can shake the fillings from your teeth.
Bethany Dutch
pollinator
Posts: 368
Location: Colville, WA Zone 5b
92
I like...

Travis Johnson wrote:A person could use a reciprocating saw too, only instead of the saw blade, put a bar of steel to act as the pitman.

TRAVIS - LOL! Why did I not see this before? I could have saved myself MONTHS of time! I literally just posted an update to this because I used a reciprocating saw... great minds think alike, I guess! Here's the new thread in case anyone is wondering, with a video of how it worked. It worked GREAT!