posted 1 year ago
2 cows were picked up yesterday from the slaughterhouse.  I requested the bones back. This is my first attempt at bone broth. I read some recipes to get an understanding of the process, but i am mixing in what i have in ratios that seem appropriate. 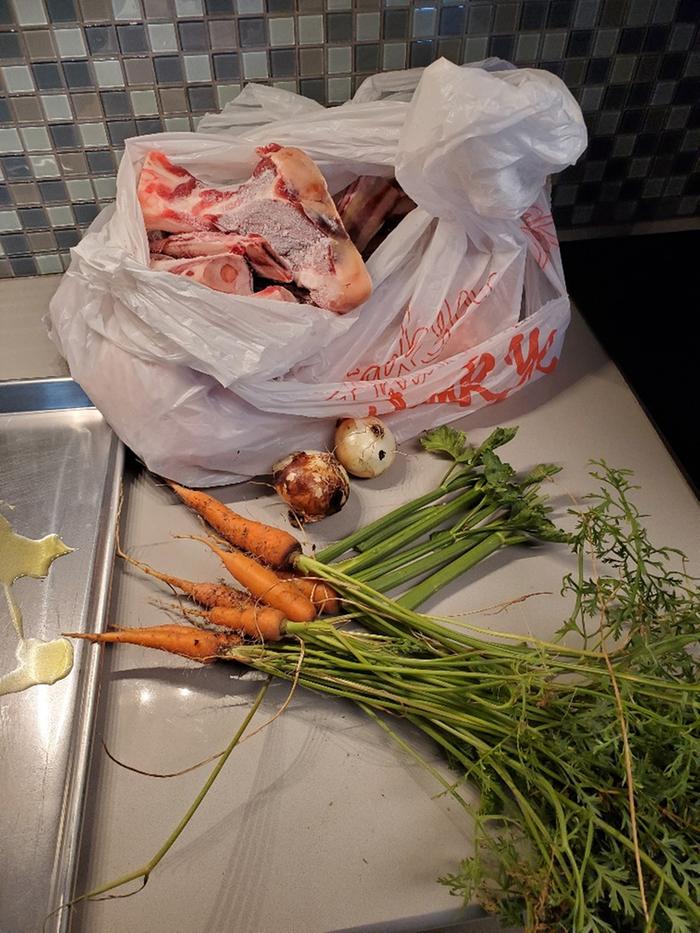 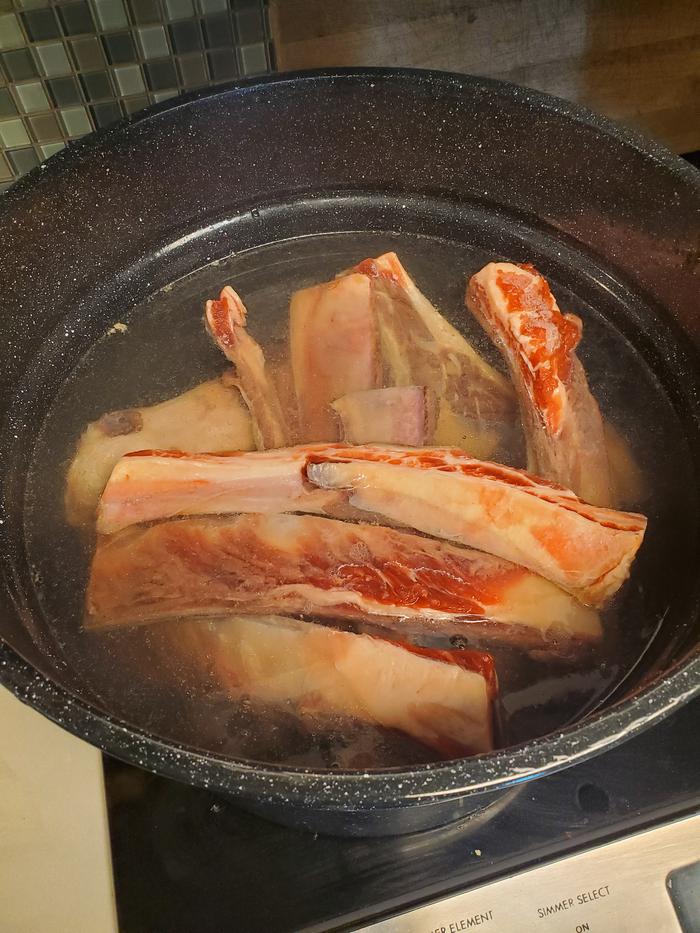 posted 1 year ago
After blanching, i roasted them at 450. Somewhere in the range of 30 minutes to an hour. If you go an hour, toss/stir them midway through. I put olive oil on the pan, added the veggies and the bones. Pics are before and after:
20190821_112206.jpg 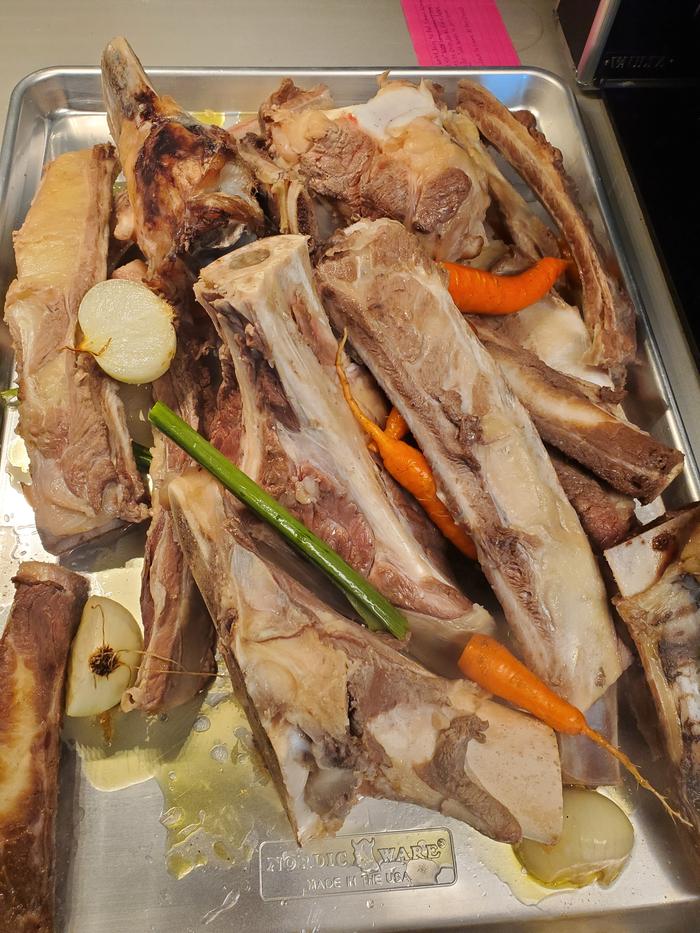 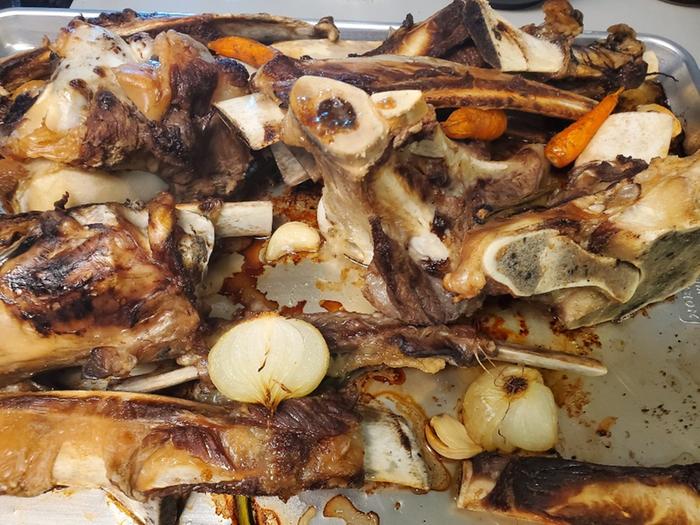 posted 1 year ago
The roasted items were put in a pot and covered with water. I scraped the bits and bobs from the roasting pan and added them in. A tablespoon of vinegar and black pepper was added.

Interesting sidenote- none of the recipes i found had salt as an ingredient. Is that the norm? I left it out. Thought if it needed it, it could be added in before final use. 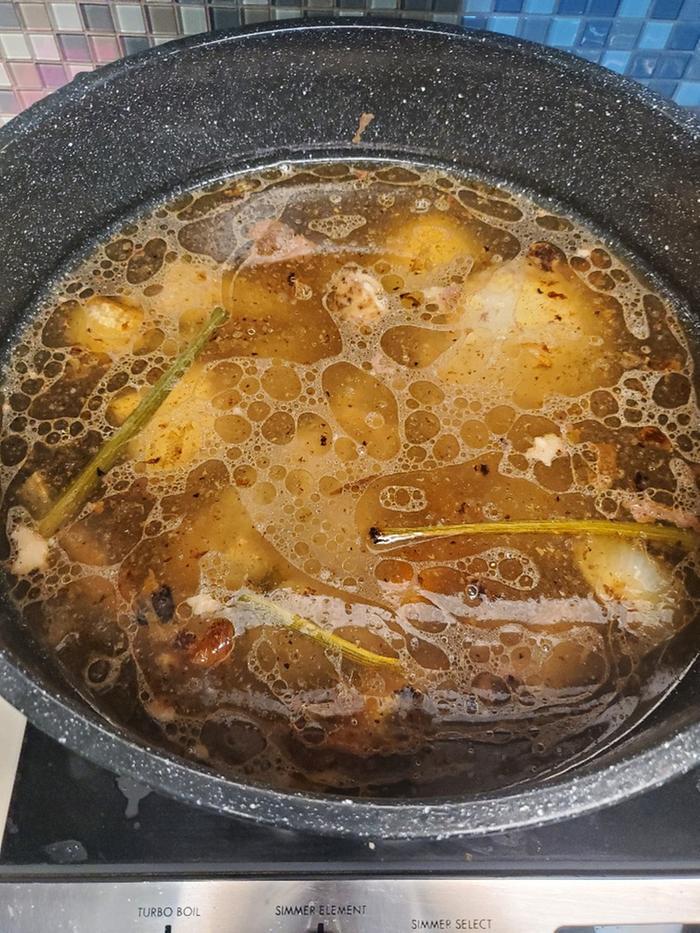 posted 1 year ago
I need some input. I simmered it all day. Maybe 6 to 8 hours. I put it in fridge overnight.

Question 1- it looks more like chicken broth (yellowish) vs a storebought bone broth (brownish). Is this normal? Needs to simmer more?

Question 2- when i took it out of fridge  it had fat on top (which i removed), but i was expecting the liquid to be gelatiness. It was not. Should it be?

I removed the fat and put it back on to simmer today.

wayne fajkus wrote:I need some input. I simmered it all day. Maybe 6 to 8 hours. I put it in fridge overnight.

Question 1- it looks more like chicken broth (yellowish) vs a storebought bone broth (brownish). Is this normal? Needs to simmer more?

Question 2- when i took it out of fridge  it had fat on top (which i removed), but i was expecting the liquid to be gelatiness. It was not. Should it be?

I removed the fat and put it back on to simmer today.

When my wife makes bone broth or beef stock, she does everything you've done so far, but she lets it simmer for days, usually 3 days. I think the color and gelatin will both come from extended simmering.

posted 1 year ago
Thank you! I need to get my flate plate rocket stove going. 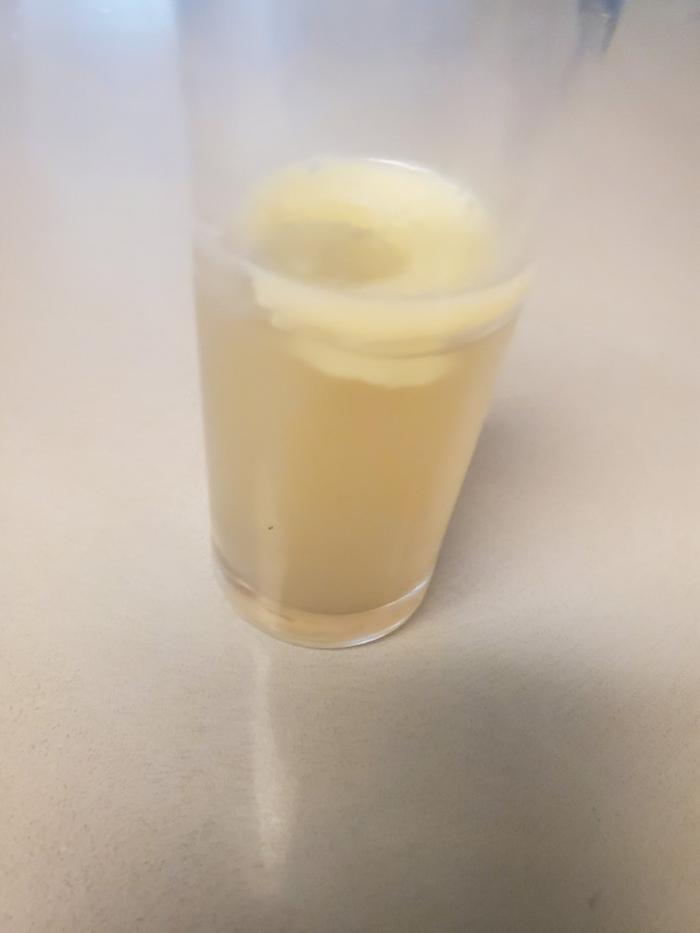 posted 1 year ago
I use a little salt. Just a little at first then more towards the end if needed for my taste buds. Not sure if that's the Betty Crocker approved way but it doesn't seem to hurt anything. I remove the fat as you did then reduce the liquid down by about 50%. It gets darker than chicken stock but not as dark as store bought. I'd guess commercial versions have a coloring added.

posted 1 year ago
That makes sense mike. You do it in the beginning, it can become super salty when it concentrates.

posted 1 year ago
Looks yummy. As the bones soften, you could hasten things along by pulling a few out (let them cool a bit) and use big butcher knife to break them, exposing the marrow.

I add sea salt and garlic liberally to mine.

Stacy Witscher
pollinator
Posts: 845
Location: Southern Oregon
228
posted 1 year ago
The color is mainly from roasting the bones. Longer roasting results in darker stock. But your broth does look like it needs longer, typically I do beef and pork stock 3 days. Generally I add some salt at the beginning and some aromatic herbs, thyme sprigs, bay leaves, parsley stems.

posted 1 year ago
It looks fantastic.

Yes, if you roast the bones longer, you will get a darker broth.  You can also get a bit more color if you add brown onion skins (the dry papery stuff that people usually just peel off the outside of the onion and throw away).  Half of a small beet (SMALL) will give you a lot more color, but you don't want beet/veggie broth -- so go light on it.  Pepper corns, coriander seed, mustard seed . . . these all add a bit of color to the broth as well.

I roast the beef bones right in the same stock pot that I'll later boil them in.  No need for a roaster --- save yourself one additional thing you'll need to wash and you catch 100% of the stuff that drips from the bones.  I roast the bones for at least 5 hours, starting on a high heat as you did (450), but then turning it down to 375 after the first hour.  I'll get them roasting, and then turn the heat down and go to work, setting the timer for 5 hours.  When it turns off, the oven still stays hot for another hour or so.  Lid off, at least for the first 4 hours or so.

If I'm around, for the last hour, I'll add a few cups of water into the bottom of the pot and throw the lid on so that it steams and braises the bones.  You want the fat in the marrow to render down and drip out of the ends of the bones.  Moisture/steam helps that happen, even before you boil the bones.

Then, I'll fill the pot with water and set it on the stovetop to boil for another 5 hours, lid on.  It's an all-day caper.  I suppose that it uses a lot of energy -- you could probably use a crock pot for the last part and that would be more energy efficient.  But when I make bone broth, I fill an entire 6 gallon stock pot full of bones.  So even through the oven/stove is running most of the day, I get a LOT of stock out of it.

Good stuff!  I'm coming over for a hot mug of that goodness.

posted 1 year ago
Your pictures make me hungry, even though I have a pot of beef broth on the go at the moment!

You've done well by roasting them, and by not putting too much water in the pot. The black pepper is good too, it increases the absorption of nutrients.

The time to get it to gel varies a lot. Sometimes after 24 hours my beef broth still hasn't gelled, but I keep simmering for a bit every day and it gets there eventually.

The types of bones used will also impact how well it gels. Some have more gelatin than others.

The reason for not adding salt is in case the recipe you're using has lots of salty things in it, and also so recipe writers can give better instructions - if we call for a teaspoon of salt in the final recipe, the saltiness will vary a lot depending on the broth, and people who don't like to adjust the salt by taste get annoyed with the recipes.

When I want just a mug of it, I add a splash of my soy sauce alternative, or just some salt, directly to the mug. I often make a quick kimchi soup with beef broth by adding some kimchi to the mug too.

posted 1 year ago
Thanks everyone. This has been very informative!

Here is the difference after a second day. It is browning. The level went down 50%. I think my plan is to refrigerate each night. If it is not gelled in the morning i will simmer it some more. I am guessing this might be done though.

I need a bigger pot. I have 2 cows worth of bones. A bigger batch run is needed. Or maybe run it for several days, adding new bones each day. It's something i need to ponder. My plan is to make it all and pressure can it. In a couple of months i'll be harvesting 5 sheep that will be turned into a potato carrot stew. This broth will serve as the base for that.
20190822_165306-1008x756.jpg 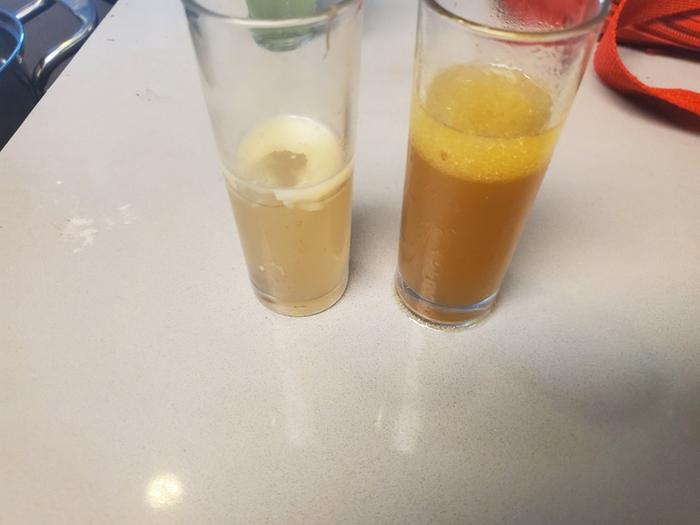 posted 1 year ago
Another thought since you have plenty of bones. If you keep reducing the liquid until it's almost gone then dehydrate the remaining gooey bits it becomes something like beef boullion. It has very strong flavor. Great for backpacking! 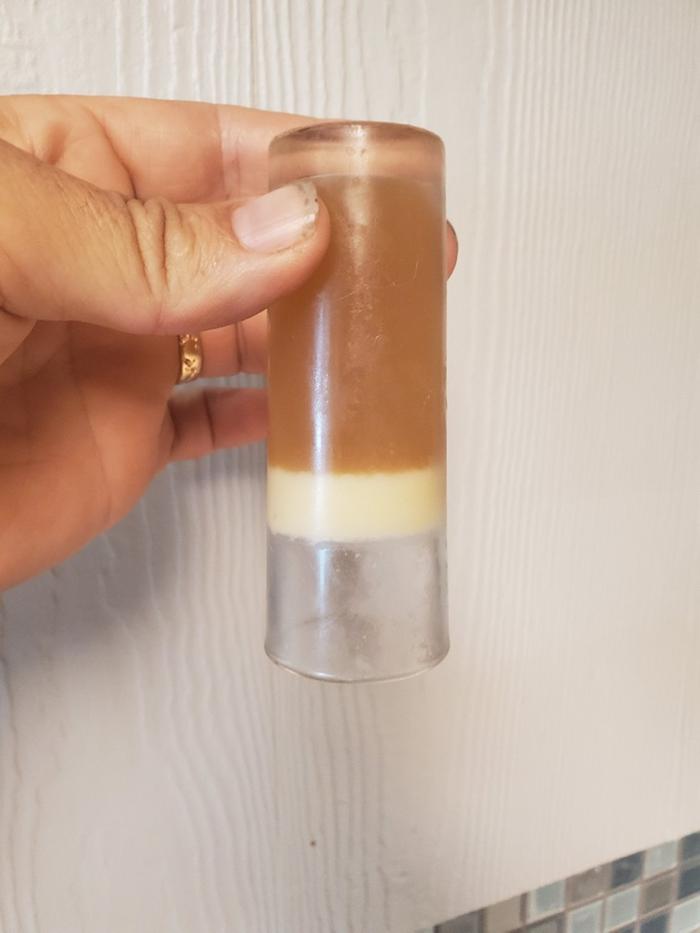 I've been getting ready to do a big batch, but was also recently gifted an Insta-Pot. Is it blasphemy to see if anyone has a tried and true method for it? I'm still getting acquainted with it.
wayne fajkus
gardener

posted 1 year ago
I use the instapot for whole chickens. I separate the juice for a broth. It does it well and quickly.

Stacy Witscher
pollinator
Posts: 845
Location: Southern Oregon
228
posted 1 year ago
Looks good. Another option is reducing it by at least half and then freezing it in ice cube trays, this concentrated stock is excellent for sauces. Some cream and a couple cubes makes an amazing sauce.

posted 1 year ago
Good stuff!  I like the idea of leaving the broth unsalted when put up.  That way you can add salt to whatever you are cooking when you use it.

What are you going to do with the bones when the broth is finished?

Learn to dance in the rain.
www.serenityhillhomestead.com

posted 1 year ago
Scatter them on my land cause i am trying to finish my current compost pile.

When zach weiss was out at my place he probably nicknamed it the bone yard....

posted 1 year ago
That batch netted 3 quarts. I got it out of the fridge to scoop the fat off the top. Gonk! The broth is a gel. I am able to scrape it off with a spoon. Gonna use that for tortillas this evening. I need to get that tool that separates fat. 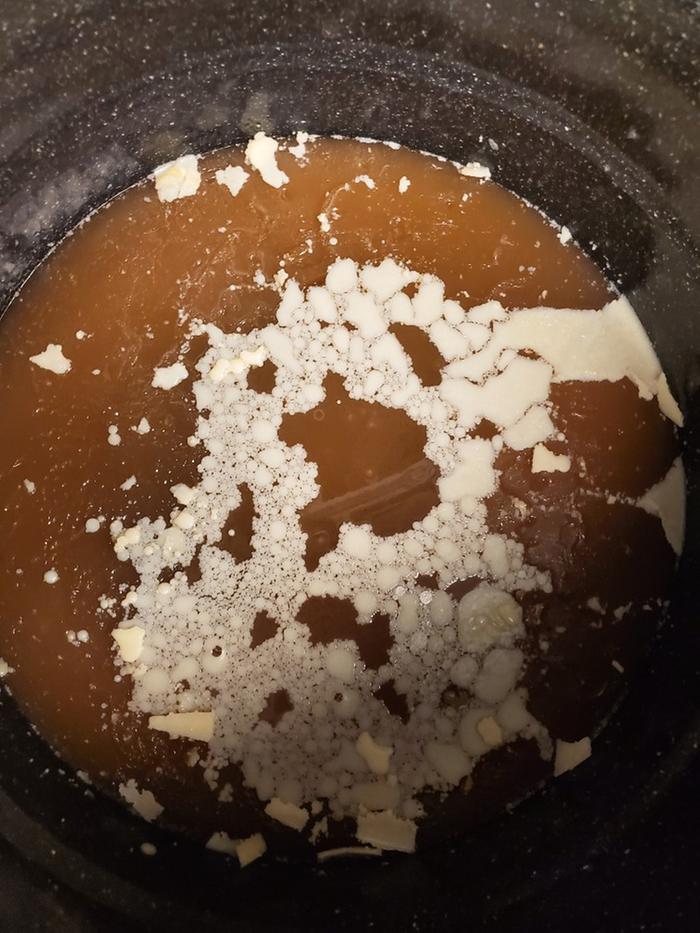 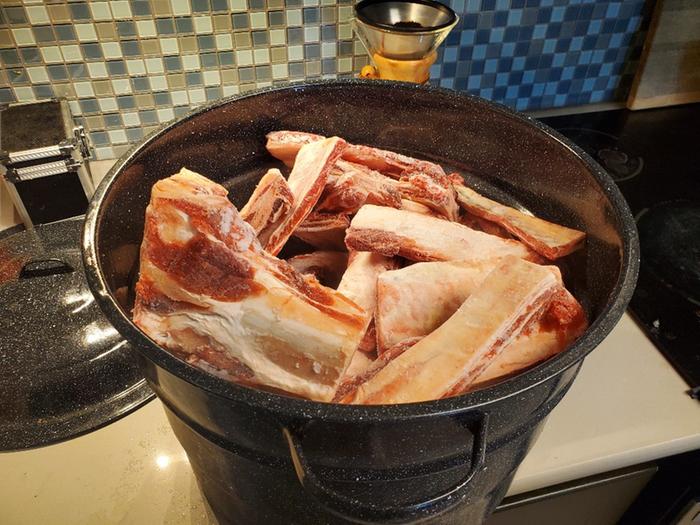 posted 1 year ago
A couple of pictures.

First one is the cooled fat off the top. I am going to render it down some more. 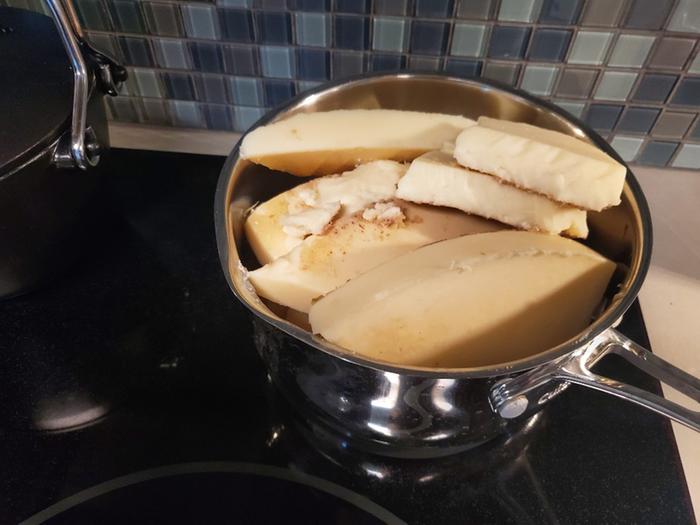 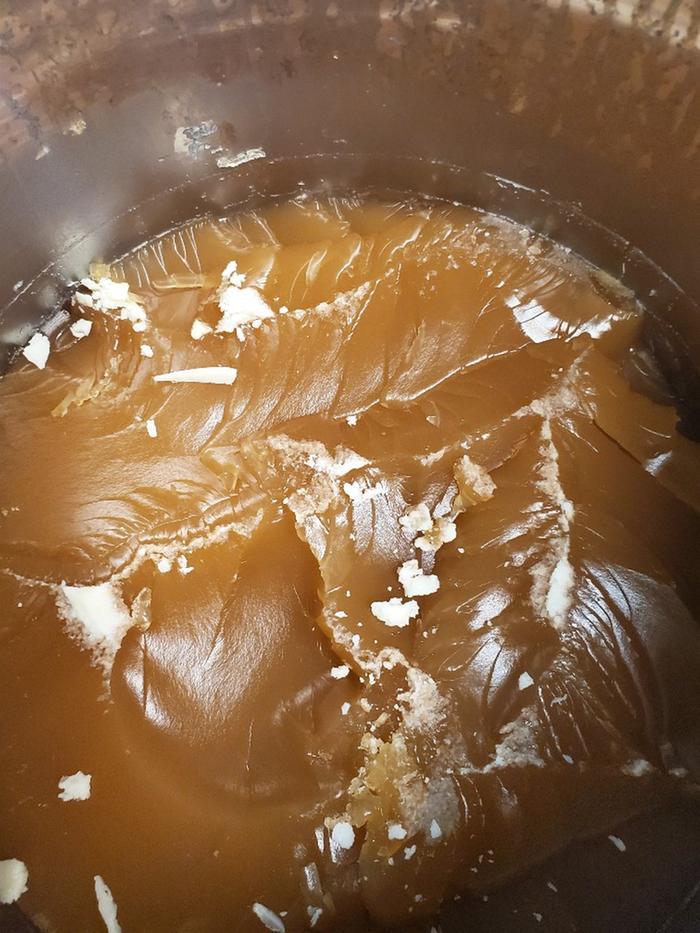 posted 1 year ago
I have several gallons canned in quart and pint jars. This should last till next cattle harvest (jan 2021).

I might try holzer bone sauce with the rest of the bones. I need a break from it though.  It might be a while.